First time growing corn. I bought a few varieties of the local garden center. Planted them in various conditions amongst my watermelons. They seem to be doing well.
Anything to keep in mind?

Critters… Raccoons, Squiirrels heck even possums seem to make growing corn an impossibility for me.

But then again, I’m in the suburbs.

Heavy feeders… need mostly N as a side dressing 2 or 3 times while growing. Once a month would be ok.

I did side dress fertilization with blood meal and hilling 3x last year and had great results.

If the wind blows it over resist the urge to stand it up. Tried that once didn’t work out. It will head back up on its own.

I too have had victory snatched by critters, right before harvest.

I currently don’t have the space for corn but this is actually one thing I know a thing or two about, since my grandfather and uncle used to grow a lot. As others said it’s wind pollinated so you need to plant it a certain way. One thing you can do is make the rows wide enough for your rototiller to go in between while not damaging the roots. This makes it easier to weed the field especially if you’re growing a lot of corn. If you’re doing it all by hand I’ve done the rows as close as 3 feet apart but I was taught to do 4 feet. Think 3 or 4 feet between rows, 3 or 4 rows (4 is better) and at least 10 feet long.

If you have access to manure til that in during springtime. We just went down to the farm and got dry cow manure that was left over from winter in a lot whose cows were in a different pasture during Spring. There might be places to get free or cheap manure. Corn likes a lot of nitrogen and manure is a great way to prepare the soil for it. Plant in succession every 2 weeks or so. Sprinkle some 10-10-10 or an organic fertilizer when the plants are a few inches high. Water during dry periods, with a drip irrigation hose if you can. Liquid sevin was what we used for pesticide, and I’m not sure if that’s even a thing anymore. This was to stay ahead of borers. Also, it’s better to use treated seed.

Raccoons love corn, so you might want to learn how to use a Haveaheart trap.

Anything to keep in mind? 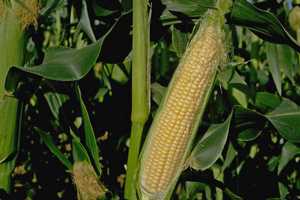 Before you can plant sweet corn, you have to order seeds, and to order seeds you have to wade through seed catalogs. Use this primer to understand abbreviations, evaluate the claims and make the right picks for your farm.

Corn loves to be fed too. I myself use this. Although I only paid 38 bucks for it, prices are crazy! 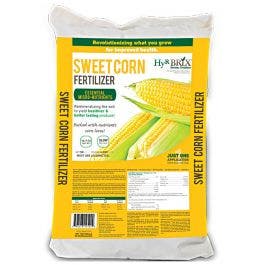 With corn you eat the seed so what pollenates it makes all the difference in the world.

@TheNiceGuy - you don’t say what type of corn, so I assume you mean sweet corn for fresh eating. But if you actually planted popcorn or a flint or other flour corn, let us know.

Your profile says you’re Zone 8 and in Japan. If you’re actually in Japan, then you may very well have a racoon problem. If you’re in North America, you almost certainly will. Racoons, if they are anywhere near your garden, WILL find your corn and ruin it before it’s ready for consumption (from your point of view). We used electric fence to keep them out, as they are unavoidable here where I live (NE Iowa). Squirrels, if they once figure it out, can also do a lot of damage, but most squirrels don’t figure it out in the few short weeks there is something in the corn patch for them.

Other than that, given your description of your planting, your biggest risk is going to be poor pollination. You need a patch of corn to get good pollination. Corn is said to be wind pollinated, but in reality, most pollen falls pretty close to the pollen parent, and you want your corn close enough that every ear gets plenty. Every kernel on the cob requires pollinization of an individual silk. Poor pollination gets you cobs with a scattering of kernels. Corn isn’t a particularly good self-pollinator, so if your planting scheme gives you relatively isolated plants, you may want to hand pollinate when the time comes. The guidance provided by @Drew51 on mixing types at pollination time is spot-on.

As someone else mentioned don’t delay in harvesting (at least most of your crop) when it gets ripe.

Better a little early, or just right, than letting it stay on too long.

The longer you let ripe sweet corn hang on the stalk, the better the chances of something else eating it (other than you)… including ear worms, and other pest, coons, squirrels, etc…

PS… side dress fertilizing and hilling (as the hoss tools guy recommends) may not be possible if you have it planted in with watermelons… but I did that last year, 3x, and my corn stalks when I pulled them up had roots coming out at 3 levels, each time I hilled a little deeper, they sent out more roots.

Also got some nasty July storms, hard wind when my corn was tall, and none blew over.
First time in years none of my corn blew over. 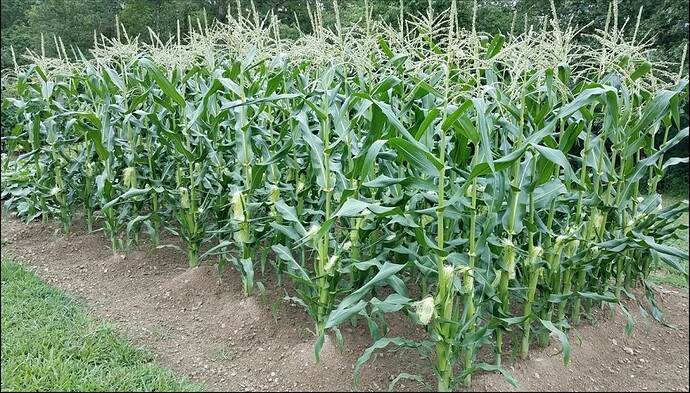 Ambrosia is a nice sweet corn but still has good corn flavor too. Pic above is the patch I grew last year. Notice the hilling. Best to plant a block of corn, for better pollination, several rows near each other but not too close. 32" row spacing works great on Ambrosia, all ears were nice and full. 2 ears on many stalks.

Thanks guys! I had no idea corn lived such an exciting life. Lots of good information here.

I bought three different varieties, and I’m not sure which ones as they stopped selling them. I’m sure they’re eating varieties. I only bought a few just to test them out this year. Some of them appear to be very small varieties, while the others are taller than me now. They look very vigorous.
All the smaller ones are destroyed now. Somethings been eating them. I’ve had problems with crows eating various things, and wild dog-coyotes eating my watermelons. No raccoons or squirrels in my area.
I’m not sure how to protect the plants. I have netting I could drape over, but it’s going to be troublesome and maybe damage the plants. Not interested in electric fences at this point. 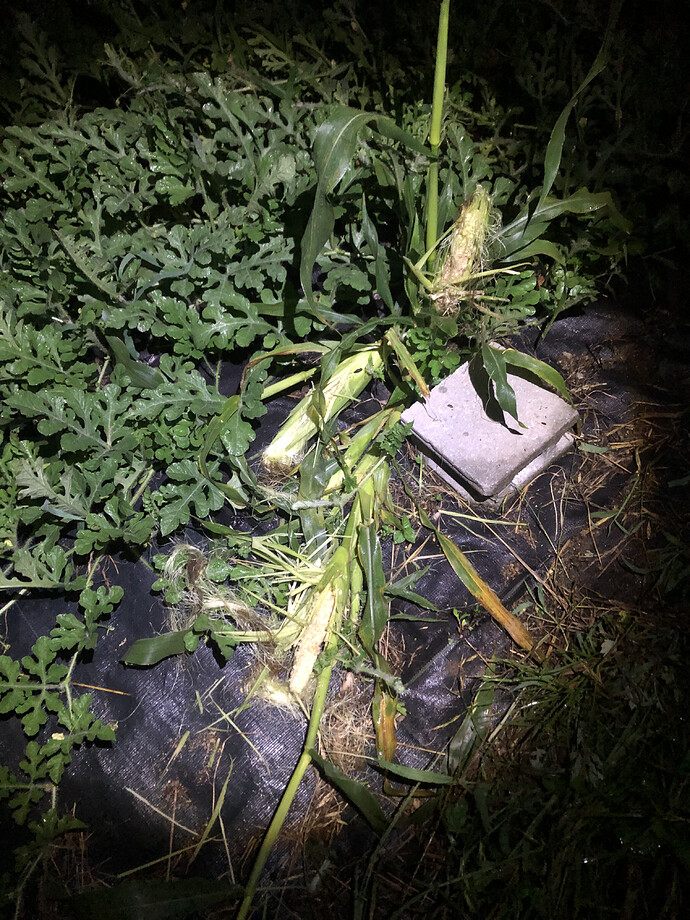 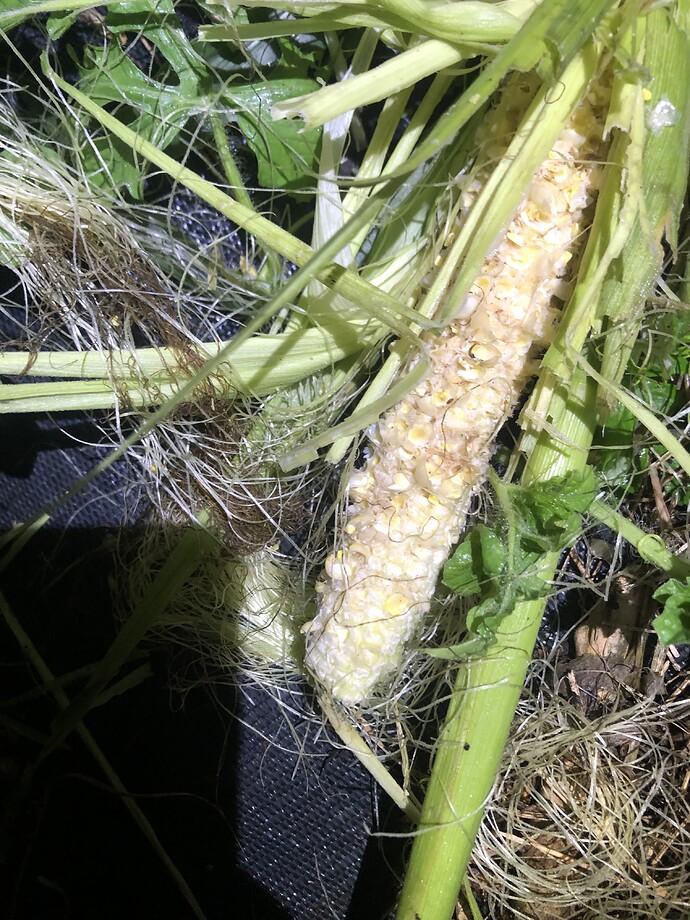 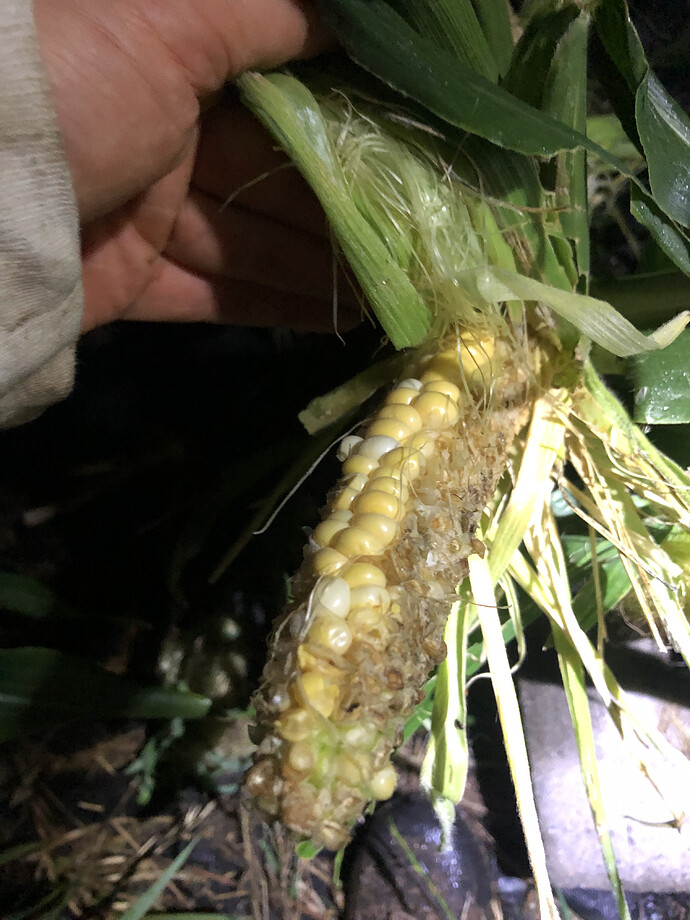 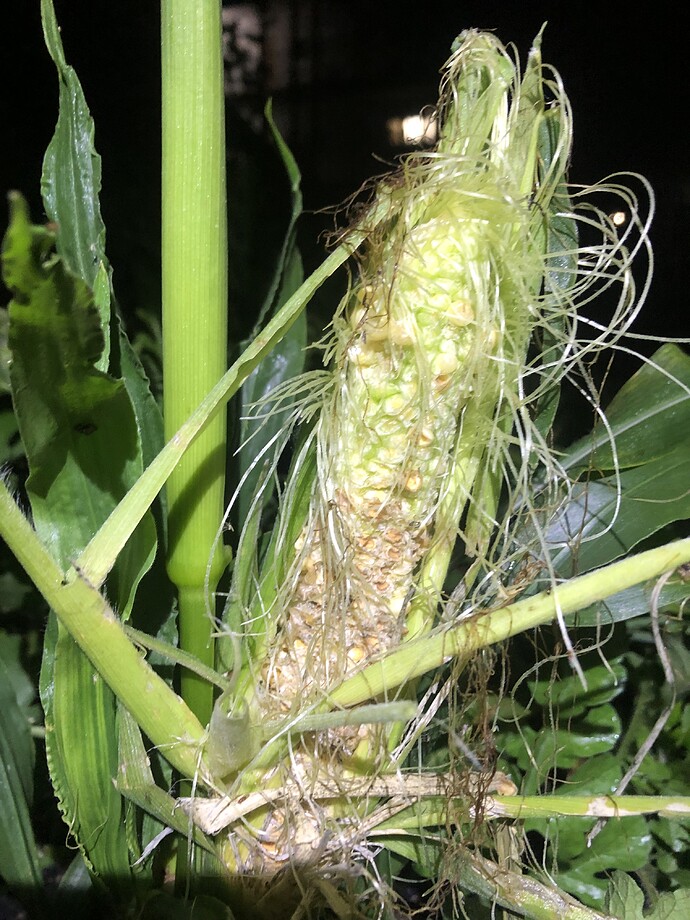 When your corn gets ripe… dont wast any time harvesting it. If you dont get it right off … something else will.

Squirrels and raccoons will do mine just like that if I dont pick it as soon as it is ready… or even a little before the tip kernels are filled out good.

I usually harvest the bulk of it when it is first ripe… a little early ripe… tips not completely filled out yet… can it, freeze it. Then I will leave some on the stalk to pick and eat fresh for a week or two… but near the end of that almost always lose some just like you did.

I’m growing popcorn for the first time and would be interested in any tips!

Tips for growing popcorn: Don’t do what we have always done. We have never succeeded.

I’m not sure how to protect the plants. I have netting I could drape over, but it’s going to be troublesome and maybe damage the plants. Not interested in electric fences at this point.

It sure looks like the work of a racoon to me. It could be squirrels or something smaller, but if you had racoons, that’s what their handiwork would look like.

As far as protecting it in future - if it’s racoons, and you don’t want to use electric fence, the only thing I know that is sure to work is a VERY robust welded wire fence that is buried at least 8" deep at ground level, and covers the corn completely. Racoons LOVE sweet corn, are very intelligent and inventive, and very good at deconstructing physically and intellectually attempts to defeat them. Some true racoon stories from Walnut Close Farm:

Short of building a virtual cage around your corn, you could get lucky next season, and not have determined racoons take your corn. But if a determined racoon finds it, you won’t keep them off it with casual measures. They are admirably intelligent, adaptable, and determined critters.

Could be tanuki. They’ve never given my other produce any problems that I know of.

I was thinking they aren’t ripe enough to pick? Online guide said the hair has to be all dark? Also puncturing a kernel should produce milky liquid, not clear?

Ok! This year I have a few plants, all the same Hokkaido variety. They all have hair and male seeds just now. Leaves getting sticky. Many seeds appear to be dropping off the male flowers. Store website says something about cutting off the male flowers after they seed to reduce pests? How do I know exactly when that is?
Also says now is the time to apply pesticides if needed. they look fine right now, but I remember last year they were covered with a lot of different bugs, including small black bugs that looked like dirt until you looked closely. Iirc, The actual corn niblets appeared free from pests. 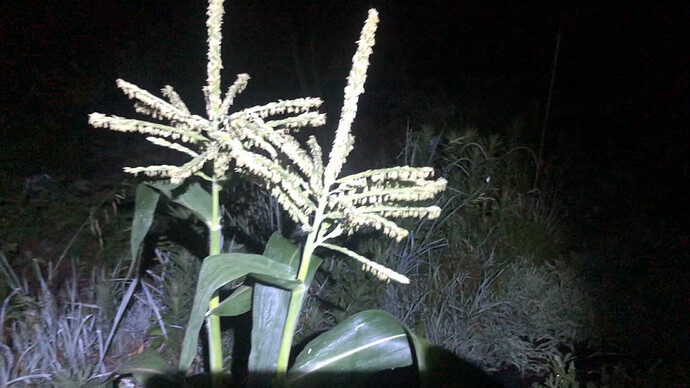 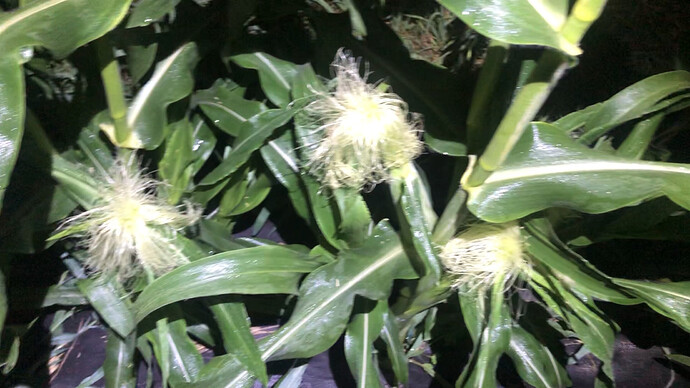