My husband and I stopped by at Cornell Orchards Store today. I am glad we did because the website said it was closed. The store has been opened but not officially. The official opening is next weekend when fresh apples are coming in.

There were two varieties of apples in the fridge, Ruby Frost and Mutsu. Must be from cold storage. There were 4 peach varieties, Blushing Star, Saturn, John Boy and Flamin’ Fury variety without a specific name. There were samples for all those varieties. The samples were whole peaches, some were almost the same size as the ones on sale.

I tried BS and John Boy. Not impressed, rather bland. Maybe, if I let them ripen on a counter, it may taste better. The sign said do not squeeze because the peaches were picked almost ripe and bruise easily.

The clerk said I could wandered about the orchards and take picture so I did.
Cornell has two orchards, Lansing and Ithaca. Ithaca Orchards is a lot smaller (100 vs 37 acres.
Per its info sheet, Ithaca Orchards has:
37 acres total
15 acres of apples
11 trees are 100 years old.
9 acres of grapes, berries and plums.

I do not wander far at all because the weeds were tall. I did not dress for walking through weeds. I wore shorts, ankle socks and sneakers. I did not want to risk getting bitten by ticks. I took some pics to share here. 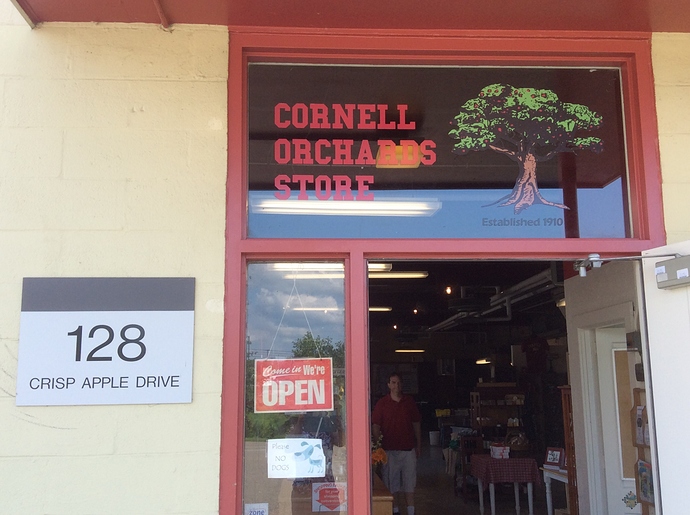 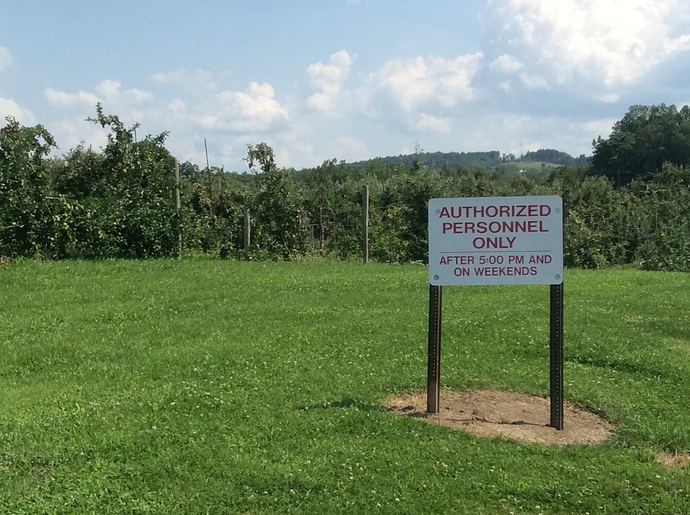 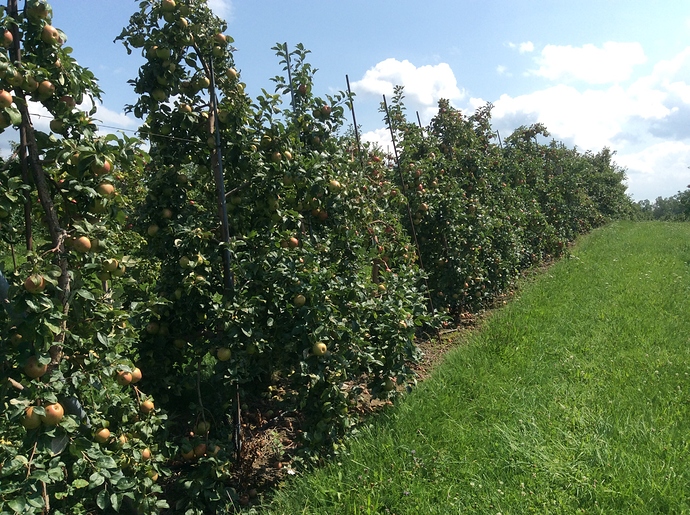 On the one side of the stores, apples were planted in what I think a Tall Spindle system. I looked around for tags. I could only one tags among a couple of rows I checked. So I could not tell what varieties are those apples. 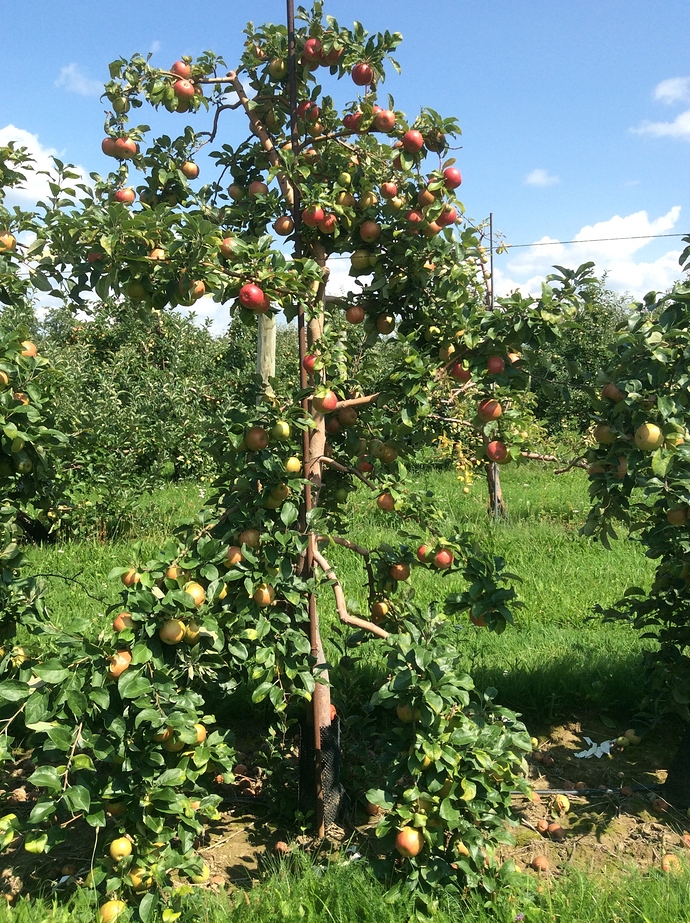 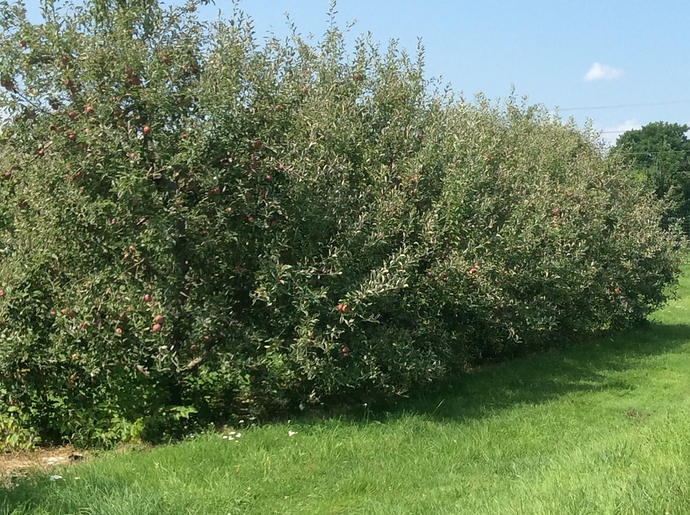 The other side of the store, the trees look like a central lead style.

I think those apples are on a smaller size but I don’t know what their real size should be. I walked abd checked several trees but only found one tag.

I don’t know what Cornell does with all those apples or who/what company Cornell sells its fruit to. No way they can sell all those to retail. 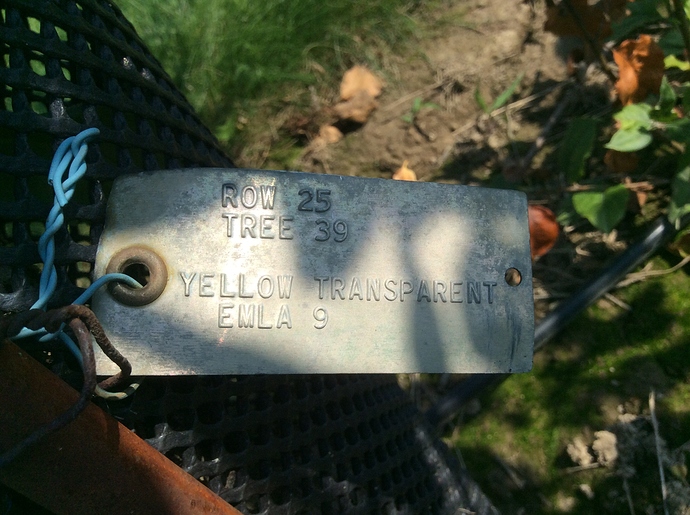 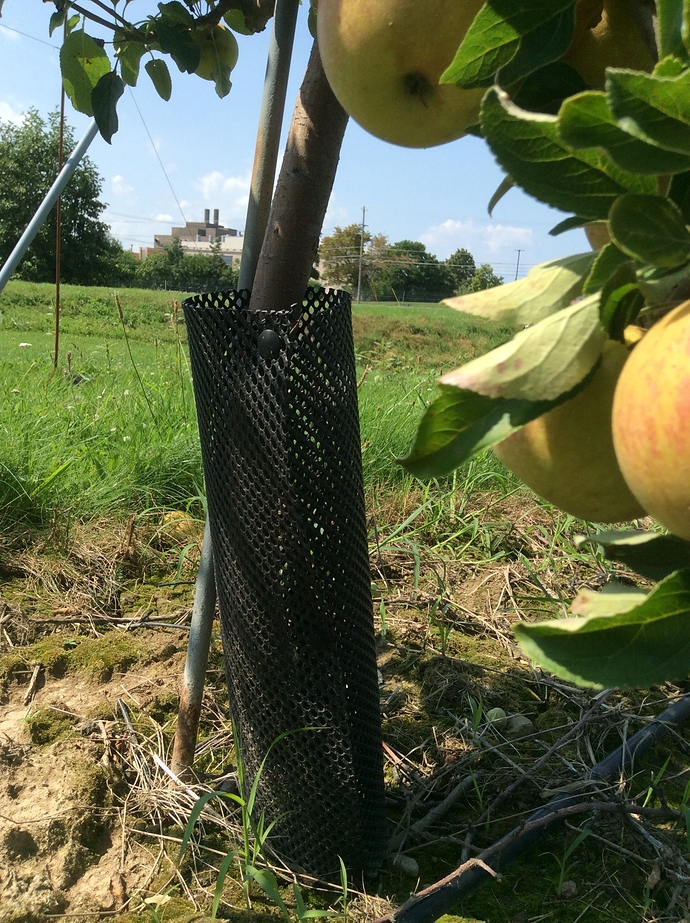 They use black plastic tubes with snap on “buttons” to protect against bunnies, I guess. 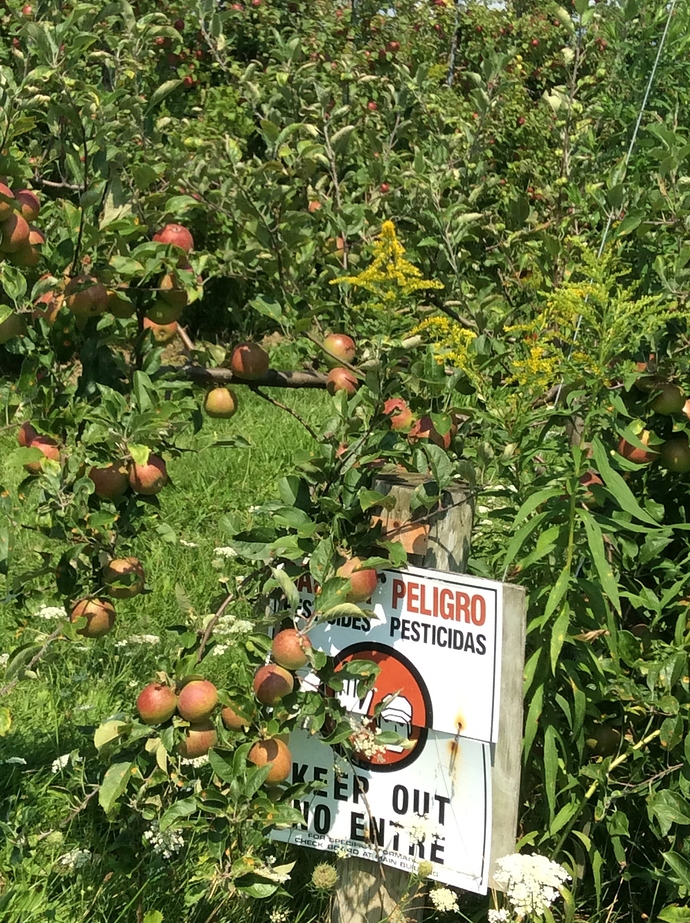 There was no one around for me to ask about their pest management.

Maybe, after the store officially opens to public, they will be more staff around.

They definitely are clear that their orchards are not Pick Your Own type.

I don’t know what Cornell does with all those apples or who/what company Cornell sells its fruit to. No way they can sell all those to retail.

They are likely maintained for various research projects. Some might be active and other trees might not be in active use for research. I have a graduate thesis saved by a student at some ag school who went through trees and hand-thinned them to 3, 2, and 1 apples per cluster to determine how thinning affects next year’s bloom. Those projects probably use trees in orchards like this. No way you are going to get a thesis done (even at Ph.D. level) if you have to plant trees from whips.

They probably also do outreach and master gardener training at these orchards. Then there is the fruit and harvest research - how to market, how to store, new post-harvest equipment, the best value-added products, etc.

I’ve noticed, too, that the main trunks of many trees are large (older trees) and the scaffolds have been grafted on.

I hope to visit its Geneva Station one of these days.

Cornell has had dealings with Mott’s in the past. Don’t know about now.

Visited the store again yesterday. Bought Sundance, Mutsu, Test Variety A and Test Variety B. We also samples 7-8 varieties. SnapDragon was sold out soon after my Oct visit. It was the sweetest of the bunch. 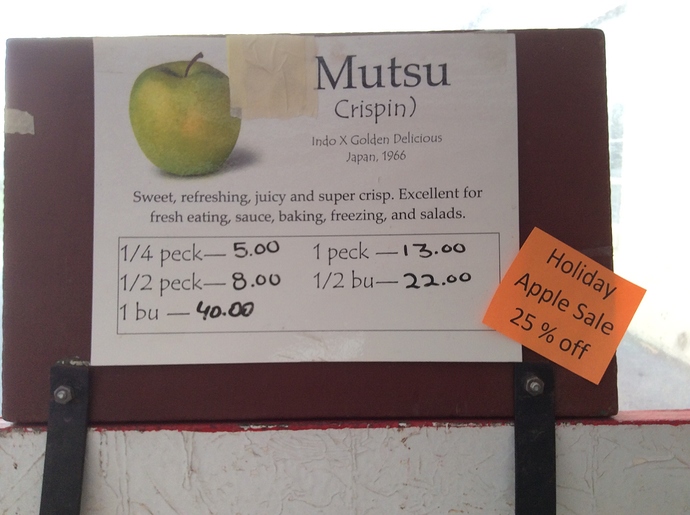 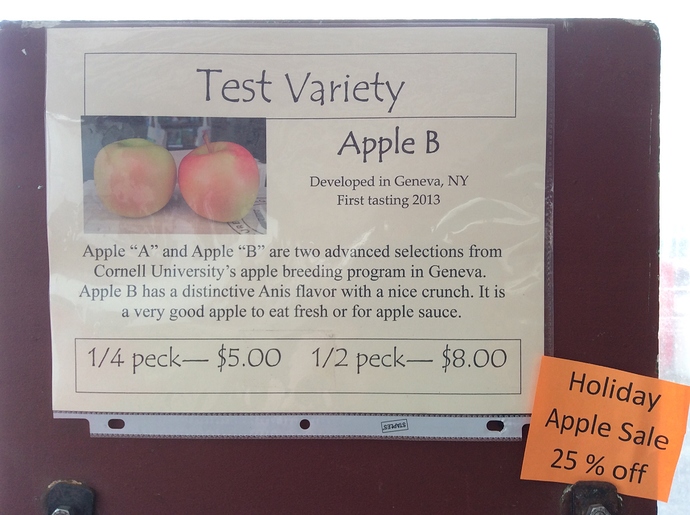 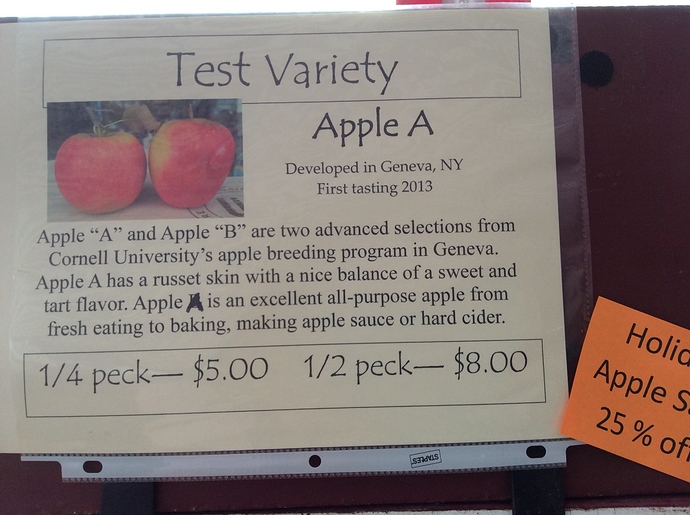 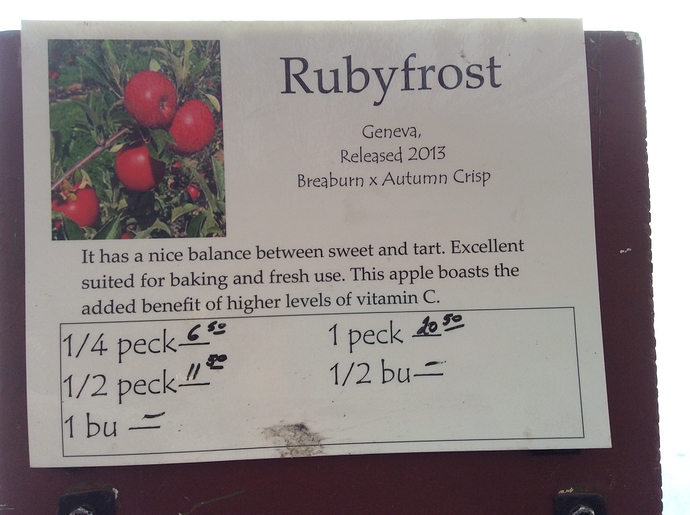 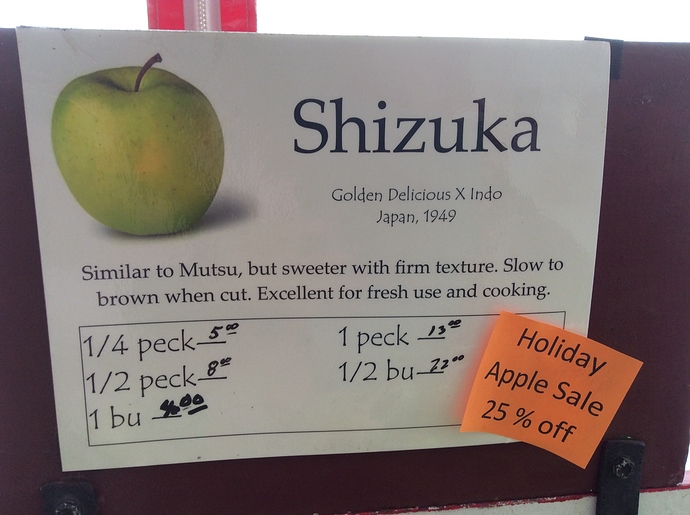 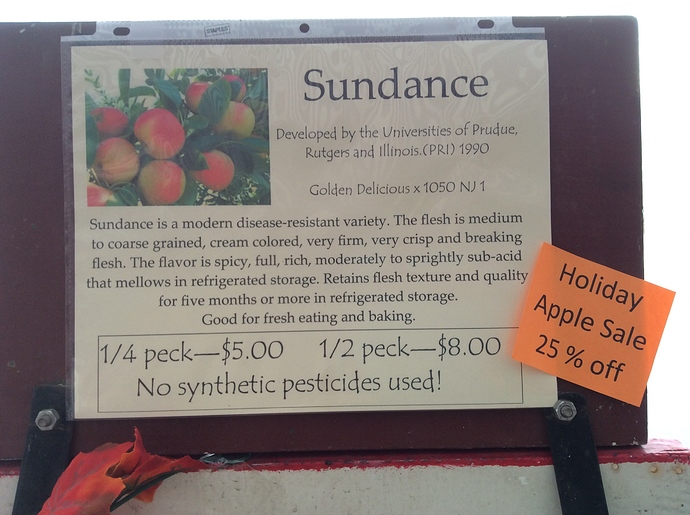 Love how they say “No synthetic pesticides used!”

All other varieties (about 10 more) probably were sprayed by synthetic chemicals.

Must be testing disease resistance. I’ll have to take a trip over there next year.

John,
I think Ithaca is worth a trip. A nice city in the Finger Lakes region, sitting at the end if Lake Cayuga. Many trails, waterfalls and of course, gorges.

Visiting the Cornell store is a bonus. I was there on the last weekend of Oct. By then, SnapDragon had a sign that said “Limited supply”. They were gone shortly after that. It is the sweetest apple variety in the store (almost all are Cornell- bred apples).

The best time to go their is in Oct. I have not made my way to the Geneva’s station in Geneva, an hour away from Ithaca.

Isn’t Cummins Nursery in the Ithaca area? Do they allow the public to look around there? I understand you can go there and pick up your order?

I have bought trees from Cummins but completely forgot that it is located in Ithaca!!!

Now,you make me realize that I should see if I could visit their nursery some time next spring.

At our family Thaksgiving party today, I had my family members taste-tested 4 apple varieties I bought from the Cornell store. 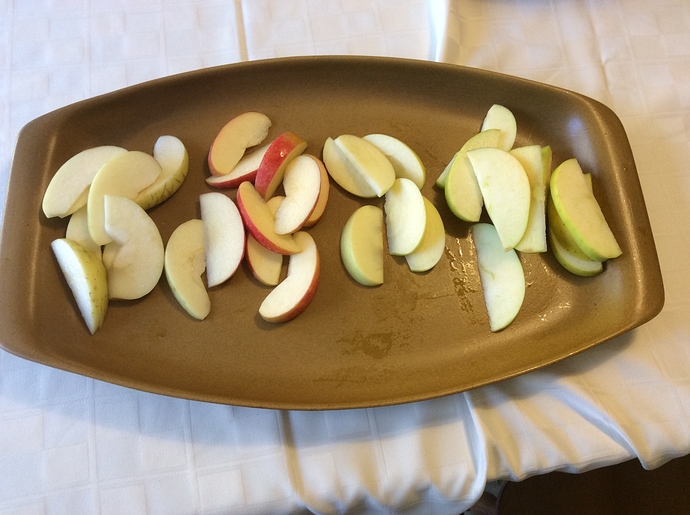 Test A won by a wide margin. Comments were like “tasted like an apple”, "nice texture (firm), “good blend of sweet and tart” , etc.

2nd place was Sundance. Not as sweet as Test A, drier, more tart.

Test B and and Mutsu tasted “old”, “grainy” and were the least favorite.