Here’s a video I shot of my peach tree. Any advice is greatly appreciated. 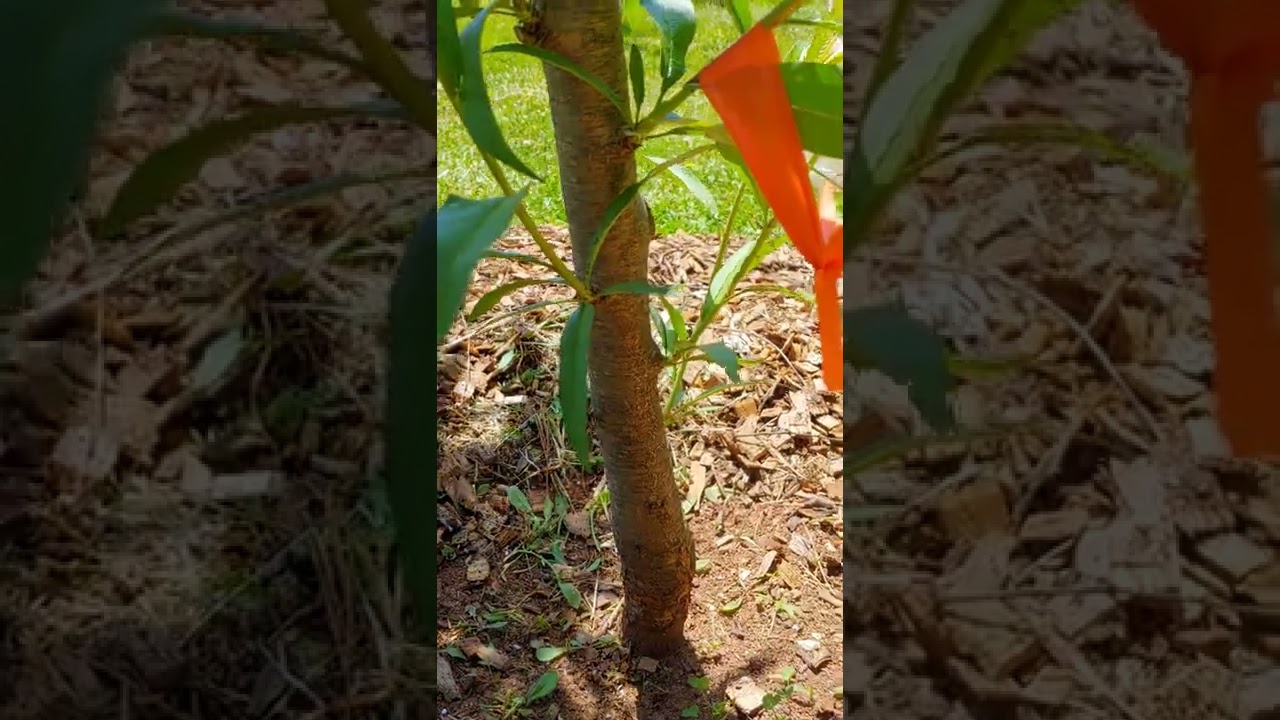 Now I need to correct it’s shape and possibly reselct main scaffold branches. Please watch the video and let me know your thoughts. Thanks

Actually its on its own roots. We got a branch from a friend, stuck it in ground, and it took. Miraculous, lol.

It’s probably short because it was stunted by OFM and weeds in the first 2 years.

I would start the scaffolding at knee height. Cut/pinch off all new growth below that. Cut off all branches growing toward the middle right now and notch the two larger scaffolds halfway down just above an outward-facing branch. This will divert most of the energy to the branch below the notch until it heals over, but will also send up enough nutrients to keep that little bit of fruit growing. Give that nubby scaffold a chance to grow out in the opposite direction and add some balance. Then late-winter prune at the notches.

There should be plenty of new growth to give you some fruit next year, which you wouldn’t have if you just severely prune it back next winter to reset the scaffolding.

If you don’t have deer problems and your main goal is a shorter tree that’s easy to spray and easy to harvest you’re going to have to make some drastic cuts. The reason why you cant really wait to cut the larger branches later is because branches work like pipes, so the larger diameter branches will always draw the most resources and grow the most, stunting the growth of the smaller branches.

The lowest effort way is to right now cut at somewhere between knee and waist high, pick 3-4 evenly spaced branches and remove everything else, it also pays to use spreaders or tie-downs to get the branches to a ~45° angle. You want to start your lowest branch at least 1’ from the ground.

If you really cant for some reason do the drastic cuts above an option would be to do a partial girdle / spiral girdle to artificially stunt the growth of the existing larger branches. You basically take a hacksaw blade and cut into the branch 1/8" deep in a spiral to limit the resource uptake. See this example: Partial girdling a pluot tree
[/quote]

An alternative to making a pruning / heading cut, used to redirect resources from the continued growth of the branches above the girdle and to encourage branching below the girdle. Also used to encourage fruiting above the girdle. Using a hacksaw blade or file, cut the phloem just below the bark surface in a spiral pattern leaving a small section of bark connected. Once the wound callouses the effect is gone.

Size of connecting section and width of girdle depend on the size of the branch. For a 1/2" - 3/4" thick branch I use a hacksaw and leave a 1/4"-1/2" gap.
If you want to just slightly reduce the vigor of a specific 1 yr old branch using your pruning sheers and slicing a complete ring around the branch without removing any bark might be effective - but this needs more testing.

Also for peach trees, especially ones on their own roots you will need to prune A LOT more than you think each year.

I saw recommendations that you should prune off more than 1/3 each year but I ended up removing closer to 2/3 and still getting a ton of peaches and a huge tree at the end of each year.

Just remember that peaches only produce fruit on last years growth. And remember to fertilize it well the first few years to compensate for the amount of growth you are removing.

Ultimately you want to achieve the classic vase shape for peach. Had the top two large scaffolds been pruned at the same level as the nub on the backside it would be more closer to the vase shape you desire. Also there is excessive lean, I would take action now to try to get more upright growth by staking and pulling it back closer to vertical. It’s easier now than later to get it straightened up. Jeremy has good tips that can allow your fruit to be ripened and gathered this year. Since it’s a full sized tree, you definitely need to pull it to vertical and top those two high scaffolds soon.
Dennis
Kent, wa

So a new branch growing from the backside isnt enough to compensate for the forward lean?

There are many ways to get to a vase shaped peach tree. You could top the two top scaffolds as Dennis suggests. Or you could just start over and select new scaffolds.

Part of the reason you don’t want scaffolds with diameters larger than 50% of trunk diameters (I actually prefer diameters less than 1/3 the size of the trunk) is that those large scaffolds don’t typically form collars, so they are structurally weaker and more prone to breakage. The top scaffold diameter can be larger than 50% of the trunk diameter at the point it attaches because the top scaffold doesn’t really form a collar anyway. Those scaffolds typically don’t break down. It’s the lower ones which cause the tree to split.

Your top scaffold is pretty big (diameter wise) but as I mentioned it really doesn’t matter. It does need to be pruned lower to a more horizontal growing bud or shoot.

The small scaffold you selected on the other side looks fine. Commercial growers start scaffolds a little higher than that to allow for mowing/spraying equipment under the tree. That’s the only reason they start them higher. Home growers can start scaffolds as low as desired because home growers are typically using hand held sprayers and push mowers to mow under pedestrian peach trees.

I wouldn’t worry about the tree being out of balance by selecting the new shoot you have marked on the other side. The tree will balance out enough as it matures, so you shouldn’t notice any drawbacks.

Likewise, I wouldn’t worry about the lean either, as long as your soil isn’t sandy, and you keep the trees pruned to a pedestrian height. Nothing taller than 8’ for a mature tree. Of course the tree will be much lower as you are shaping it.

We have peach trees leaning every which way and have never had a blow over…yet. This is in KS wind where 40 mph winds aren’t uncommon and trees routinely subjected to 60 mph winds in thunderstorms, or an occasional 80 mph wind. Here is a vid which may be helpful. 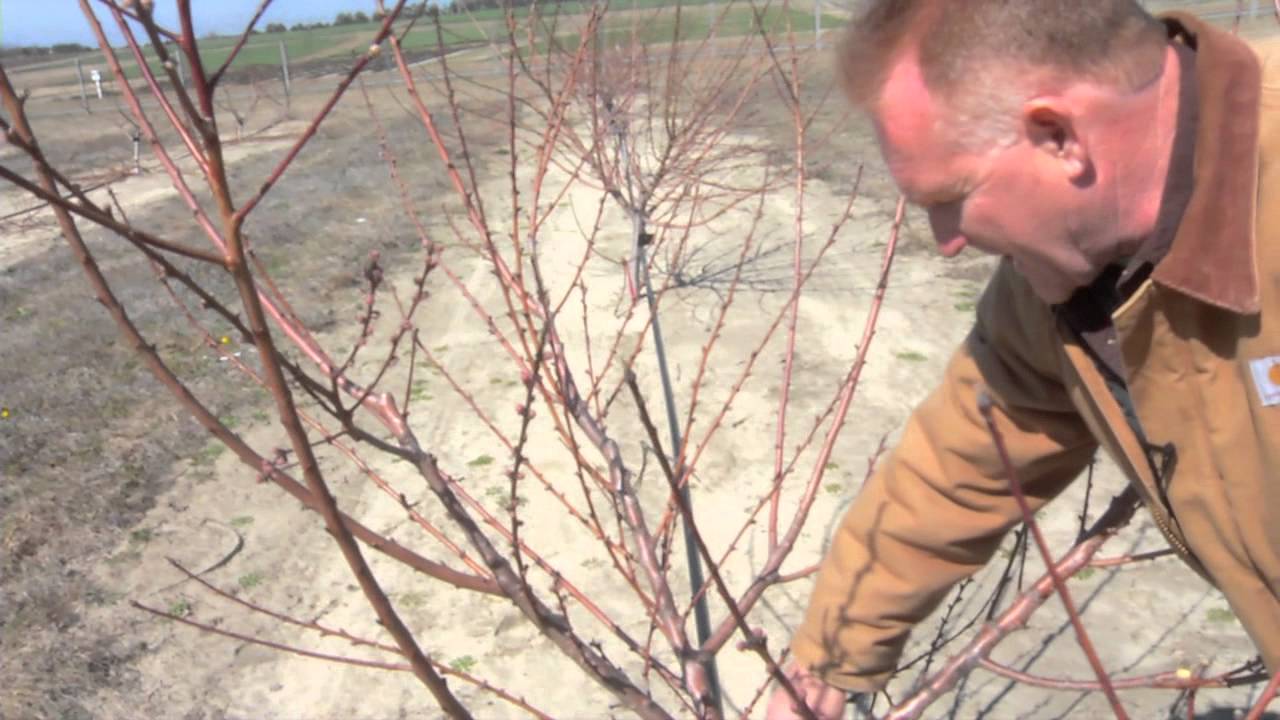 No, when the tree loads up with fruit on those taller scaffolds, the weight of the fruit at that higher elevation could easily break the trunk. Better not to take that chance when it’s so easy to pull it back to the vertical now. After another year or so of growth and you will not be able to get it back to vertical. Those lower level backside limbs with not offer enough counter leverage to support those taller ones when they load with fruit.

Would i not just prune every he entire upright scaffold?

So here is the takeaway I got. Or to recap. Let me know if I missed any major points.

Regarding the branch that you selected as a counterbalance and have tied, if there are any little ones above it in the same plane I would leave them to grow as a possible alternate scaffold a little higher up. Next year you can decide if they stay or go. Everyone is going to tell you some slightly different things, there is no single right way. You could straighten the trunk, or not. There was a different thread on here recently where we discussed the leaning tree.