Selection not bad for starter trees at a good price and you can get them today. Costco, at least here in the SLC area, just started with these small trees last year. Before that, they were significantly larger and even cheaper! They used to have multi-grafts too, but not any more! Nonetheless, today I saw Satsuma, Santa Rosa, O’Henry, Fantasia, Rose Nec, Red Haven, Buckeye Gala, Zee Lady, JH Hale, Diamond Princess, Coral Champagne Cherry, August Lady, Fuji, and Bing. The other day I saw some other varieties including Harglow at another Costco. 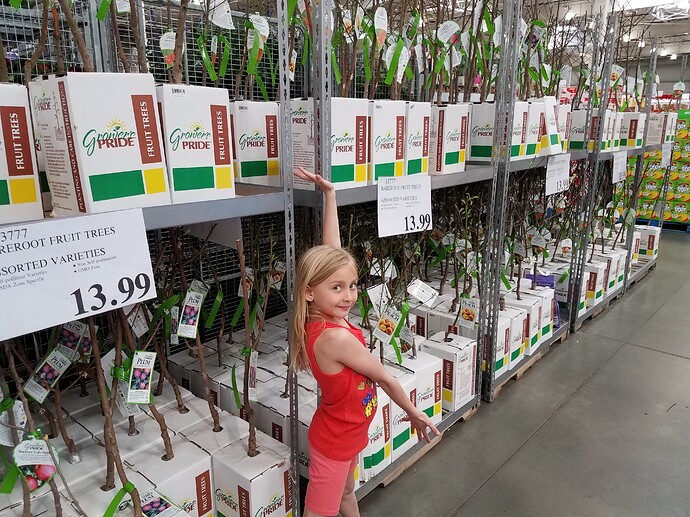 Yes but are they on a rootstock that will perform in your area??

When I think of bare root tree, I think of a tree with bare roots. No dirt around it in a pot or box and normally I would think of it as in a dormant stage. Are these classified truly as bare root as they are in boxes and leafing out as well as flowers on them? The prices look really good…

That is the main problem up here. Many of the trees in big box stores are lovely but on rootstock totally unsuitable for our cold zone. Some do live fine, but then the Russian roulette game comes into play.
I have switched to buying my rootstock and bench grafting. I have also bought a small dormant tree and immediately grafted it onto good rootstock before I plant it. Just hedging my bets I guess.

I see alot of people take a nonchalant approach to rootstock…and pay the price years down the line. There is a reason that commercial growers take so much time and money planting specialized rootstocks matched to the soil profile, because it makes a HUGE difference. So the question posed to me years ago by a very serious commercial grower applys here…“do you want to grow fruit or are you just playing at it?” If so you better educate yourself on understocks.

I belong to Costco, and it is interesting to see them selling fruit trees for essentially a wholesale price. Now independent nurseries are getting thinned out from all this big box competition- two have gone out of business within 10 miles of where I live in last 5 years or so- only two independents remain, one of them includes wholesale for contractors and big trees in their business model, another is a greenhouse nursery that also sells fresh greenhouse vegetables through the winter. Along with pressure from Amazon, the entire retail world of American commerce in in the final stages of big fish swallowing smaller ones.

I bet those trees come from a huge nursery operation in Tennessee.

You have to be very lucky, resourceful and quicker than a minnow to survive as a small independent in the lake I swim in. I charge 20 times the price for trees 2-5 years older. They sell. Probably for the same reason no one reserves tickets for a Broadway show 2 years in advance.Most people don’t like waiting long for their entertainment. The hobbyists on this forum are probably more patient than the average American.

I have bought plants on closeout, just not fruit trees. I’ll probably work up the nerve and buy some this yr though.

Two years ago, the trees Costco had were great. They were a wide variety of scions on named root stocks, and of decent size and condition. Last year they were more typical big box stuff, a couple of popular varieties no root stock info, and small (and more expensive).

In typical big box fashion, their buyers just go with whatever deal seems best, with not much regard for quality of product (if they even know about fruit trees). It will be interesting to see what they have gotten this year, but I don’t really need any more trees…

Well they did have tags for rootstock info on these. For example, EMLA 7 for Fuji, Lovell for the peaches, and Mazzard for the cherry.

My local Costco had some decent fruit trees, and there was a good selection this year at my local Kroger (!) as well. However, I will not buy fruit trees unless I know the rootstock, because so many of them do poorly here. For example, PTSL is big where I am, and UGA recommends Guardian RS, with Lovell second if you can’t find Guardian. The rest, at least, according to UGA Extension, are pretty much death on a stick. So rootstock is important. Same thing with apples. MM111 and M7 would’ve ok, but M26 would be foolhardy because of fireblight.

I just don’t understand why they can’t put a single line on the tag that says “rootstock”. How hard would that be? Sure, the trees are cheap, but unless you have acreage, every tree I have takes up a space which prevents another from growing. I’d hate to waste 4-5 years waiting on a tree that ends up dying on me for something that could have been so easily preventable.

I bought a small Bearrs Lime for about $9.00. It was very healthy, and has been growing great and has already started to flush, first year in the ground.

They did put a tag on that said what the rootstock was. See my other post.

Those green tags in the pic tell you what the rootstock were.

My mistake! TBH, I’ve stopped checking big box stores because none I’ve seen had the rootstock listed. Hmmm…might have to run to Costco…

I have a number of trees from Costco that are performing very well. However, they were the older ones, not these small Grower’s Choice ones. The only issue I had with Costco trees was a multi-graft pear that got some FB and I ended up taking it back. That’s when I first got into trees and never knew anything about FB. Keep in mind that you can’t beat Costco’s return policy! BTW, no I don’t work for Costco.

They are my favorite Big Box, but you have to take into consideration the cost of membership and the amount of time walking in their huge stores, slightly drunk on all the cheap goods- shopping there is work and all shopping is safer when sober. I’m mostly an Amazon buyer these days for all but groceries. Time is money.

Well it works out to about $4 per month for membership, and that probably covers the cost of all the samples I get every week.

They do have good deals on a lot of things there, including groceries (lots of organic, btw).

It certainly depends on where the Costco is located. In my area much of what they sell is on rootstock that will not survive our cold winters in the long term. Having it on the label does not seem to matter, people are excited about the price and the nice tree size and buy anyway.

Local nurseries are a better bet because their trees are selected for survivability and are grafted onto hardy stock. But, as Alan pointed out, they are having a hard time because they cannot compete with the big box prices. For some shoppers the lure of a plum or cherry in full bloom is too much to resist, and noting the zone or rootstock is not a priority.

The sales of disposable trees here is alive and well and making money. That said, I am a champion of trying new varieties and experimenting with zone pushing, but those fruit trees still need to be on the best rootstock for our area.

The Costco trees are legit, coming from burchell nursery in California. The rootstocks they use are basically the same as DWN, but they don’t use citation and have a few of their own. At 14 bucks a tree, wow, that’s only 2 bucks more than a wholesale tree with royalty charge. Burchell also has some really really good varieties that are their own, too. I have never bought burchell trees from Costco but from reputable nurseries. THE PROBLEM is, about 50 percent, yes 50, are mismarked trees. I have some mystery peaches and plums from them I will never know what they are. Some nurseries here have stopped selling burchell trees for that reason. I have not purchased a tree from them in a few years, they may be better now but probably not. If you can get the right varieties I recommend September honey peach, October sugar nect, honey showers peach, and would recommend a few of my mystery stuff but don’t know what they are. Some of my other mismarked stuff was terrible fruit though to but on good rootstock for topworking. So great price but you don’t know what your getting!!

I just asked my wife and it’s a bit more expensive here, but a lot less than I thought we were paying. I thought the annual fee was more like close to $200.