So far this year I’ve had 5 m111’s die to Cotton Root Rot. 6-8 Jujubees were affected too; they survived, but fruit tasted awful. Blackberries all died

Should I take out all the apple trees to save the other fruits? or switch to geneva rootstocks?

Geneva’s haven’t been tested for cotton root rot, as far as I’ve heard. I might be wrong. It sure went through your trees quickly. Are you sure it’s cotton root rot?

Thanks. Pretty sure its CRR. When the 1st tree died, a Fuji, I posted & asked for opinions; dug up roots, took pictures, etc. I think we ruled out the other suspects.

Wasn’t borers for any of these trees. Tree’s completely die 7-10 days, typical of CRR. Iron Chlorosis appearance is often the 1st symptom of CRR, several trees had that. Dead Leaves all stay on the tree, another CRR sign. I use a moisture meter; wet, but not waterlogged (which would almost be impossible to do in Dallas). Its easy to push the tree over when its dead, another CRR sign; these have been in ground from 2-6 years.

Another symptom of CRR is cinnamon colored roots which are spongy.This root is kind of spongy. I’m not exactly sure what the root should look like, but it could pass for cinnamon colored, below.

In the second picture, the far tree died 3 weeks ago; the near tree died this week; they’re about 12’ apart. 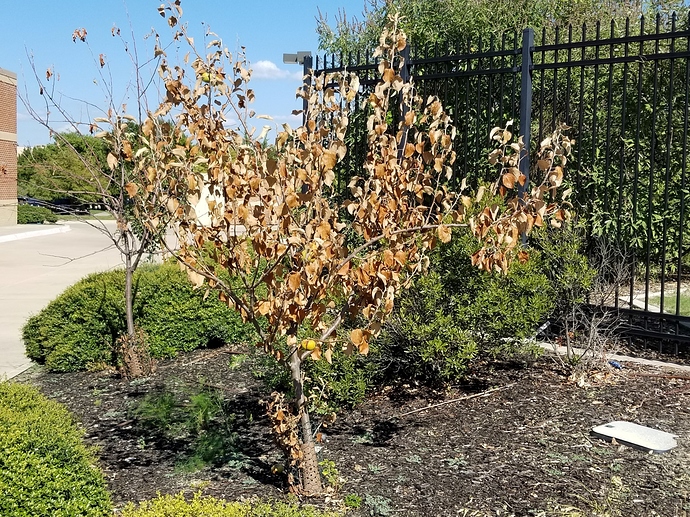 I’ve read about CRR but only since I’ve been on this forum. We are not far from you. I read up on the area it affected and it’s east to the Neches River. Our county’s eastern border is the Neches River. That’s about 20 miles east of us. I would just as soon you kept it over there but man that is tragic! I would be shedding tears!