First one of the season, I have gotten a few fruit in the past couple years from a pair of seedling volunteers I top worked over to this variety 5 years back. I was a bit surprised to find one ready to pick, usually thay come in a bit later. I enjoy the beauty of these multi hued apples as well as the aromatic richness of the dense flesh. Must have some scab resistance, very clean skin. Some small sorbitol clear spots in the flesh, I have seen this variety with bad watercore from a local commercial orchard. Seems to do well in my location so far.
My experience with this one led me to acquire some scionwood of its progeny this past year. Fiesta, Karmijn, Rubinette, Golden Nugget are in the nursery rows. Anyone have a fav Cox descendant? 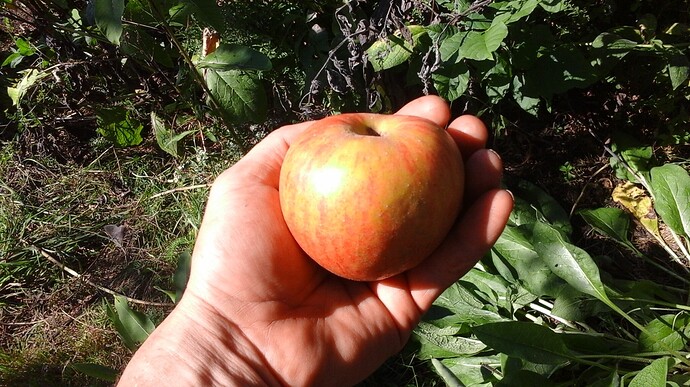 My favorite of the Cox progeny is Rubinette, its fairly easy to grow and is wonderfully sweet and flavorful. It may be a bit sour for some tastes and is somewhat prone to rots. Kidds Orange Red is also excellent, it has less sour but also is not quite as sweet; excellent aromatics. It has been highly biennial for me, none this year. Ingrid Marie is also looking to be good, and on the sour side.

Many of them don’t work well in my climate. Cox itself gets bad watercore/rots, Holstein is similar, etc. Laxton’s Fortune has been a good early one, and Swiss Orange seems like a good late one (but I have not had much experience; its not been rotting but has watercore issues). Freyburg is also excellent but it tastes more like its other parent, Golden Delicious.

Thanks Scott. Always nice to hear folks input on varieties. Rubinette does sound like the one to focus on, Fryeburg I’ve had locally doesn’t seem to develop in time reliably, like some other GD offspring. I’ve also heard Kidds OR recommended,
I am quite interested in Golden Nugget, with Cox on one side and Golden Russet on the other, condensed into a small package…

Jesse, I have an apple I got from Botner which he had labeled Golden Nugget. It was completely russeted for me so I assumed it was something different, but it could just be related to my climate - things tend to russet more here than elsewhere. If it is the right apple its a very tasty fruit. For me it is on the early side so it will definitely ripen well for you. I had watercore issues with it but that as well as the heavy russeting could mostly be due to the heat it is ripening in here.

Oh, Rubinette is on the late side, I just harvested most of my tree. It is a week or so later than Freyburg here. Not sure if that is too late for you.

Here’s a nice one, next to the graft union of the tree which was top worked five years back and is now healed over. What a flavorful apple! 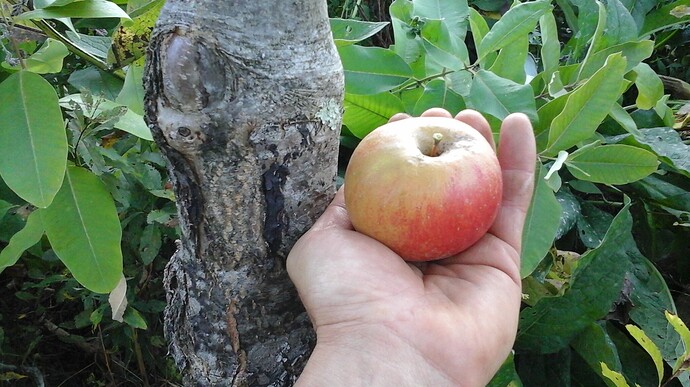