Daffodils not coming back

In fall of 2020, I planted about 800 various bulbs in this large bed in my front yard. The topic is about this time in 2021, and the bottom pic is today. On the left side of the picture in particular, you’ll see that a significant number of the daffodils did not return this year. These are all yellow Naturalizer types, mostly the varieties “Dutch Master” and “Carlton”.

Seems strange to me that varieties known to be good naturalizers, would almost completely die out in a single season. I left the foliage until it died back on its own. What even stranger is the more “froufrou” varieties, which you see at the very front and very back of the pictures (not blooming yet) look great with no noticeable loss. 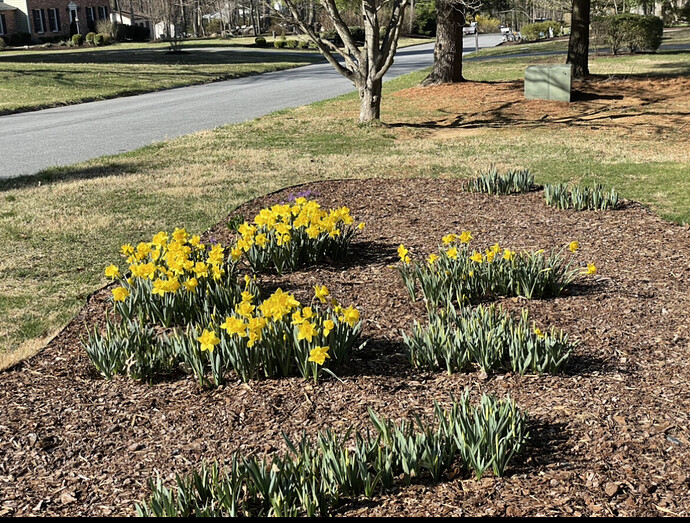 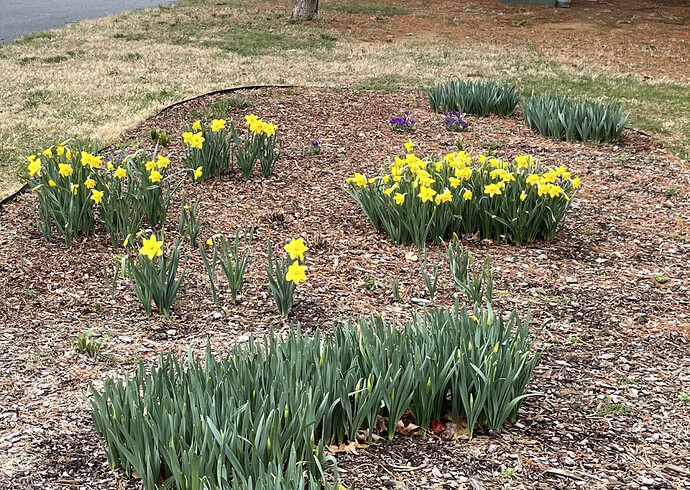 My wife thought ours had died, but they were out there yesterday. Maybe a little later than usual, or maybe she just forgot where they were.

Was last summer especially wet for you? Our was. That can make bulbs to rot.

Something ate a lot of my bulbs. Others must not have been as tasty, they seem to have gotten stronger.

My bet is it was too wet. We had a wet fall here. Hopefully the remaining ones will prosper and spread.
For those of you having problems with animals eating bulbs try daffodils as they are extremely poisonous. Known to kill horses. The bulb has the most toxin but the whole plant is poisonous

When we lived in central Wisconsin, my daffodils thrived and multiplied. Where we live now farther north near St. Paul they seldom last more than a year or two. The soil is very sandy in one area, better real soil in another. I suspect they can’t handle the cold. I don’t see many around town except close to foundations. We have a lot of deer that obliterate any tulips, but I had hoped we could grow daffodils here, since animals aren’t supposed to eat them. Little success after numerous attempts.

I have had mixed results here. I have tulips my mom planted. Not that many left but my mom passed in1986. Still have about ten that come up every year.

Not many bulbs of any sort survive up here. If they are mulched heavily and we get early snow cover, some will survive. In winters without early snow cover before sub-zero temps hit, most bulbs are toast.

Back in 2012 I had visions of naturalizing our acreage with daffodils in a fashion similar to Door County, WI. Nope, not gonna happen.