Grafting and I had a bit of a falling out last spring and we agreed to see other people. I was convinced nothing I had done was going to take and it seems I only had one graft actually fail. Well, failure is relative I guess. I have good growth on nearly every graft, but many of the graft unions themselves are hideous to look at. Probably my worst example: 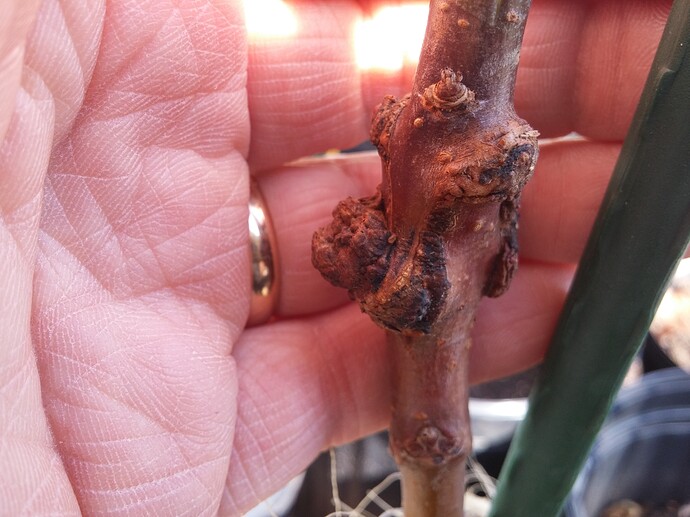 These were all wrapped very tightly in Temflex. What is the general prognosis on a graft like this? Is it just ugly yet functional or is this tree doomed to strangle itself to death with this odd growth?

That’s a Temflex graft. Mine from last year look like that too.

Fortunately, the experts believe this is not a problem.

Should have pulled the grafting tape sooner! General Fruit Growing

no, it is not a problem caused by humidity or pressure, at a forum of my country was discussed for a long time on the subject, there were many people who argued that the problem was the glue that brings the tape, but is not I did some different tests and the problem is isolation. or pear trees and apple trees bear the isolation more than 2 or 3 months we can engraft using plastic tape but before 2 or 3 months we must untie the graft and re-tie with a material that does not isolate, after two mo…

It may be a temporary problem because there may be a relationship to it being a weak graft but that is not the case in that photo, I believe. Looks like tissue is well joined and over time the graft will be complete, gradually disappearing or leaving only a slight swell. I spray paint my grafts so I don’t lose track of them these days.

Did you use a grafting tool for this graft or is that a standard cleft graft? I have a couple of grafts that look like that and they all are associated with a grafting tool. The good news is they are growing well and as Alan said, they should disappear as they age.

This year I did not use a grafting tool at all and went 100% cleft graft.

I believe this one was a tool graft, but I have clefts and W/T that look the same. I left them wrapped for a full year as most of them were breaking the Temflex on their own anyhow. Lesson learned to just trust the unions to be strong enough in a couple months and get the tape off of them.

I’ve used parafilm before this, but wanted a really tight wrap this past time so I tried the Temflex. I’ll use Temflex again next time, I’ll just be more vigilant about removal. 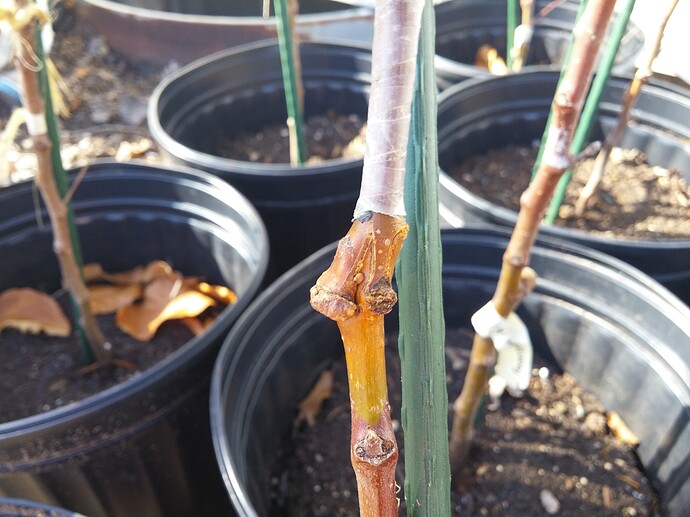 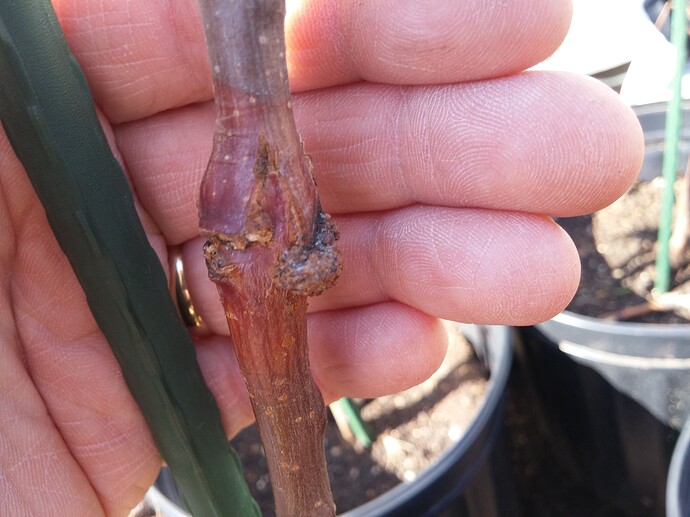 SuperG,
In your last two pics, your W/T looked more like a saddle graft than a W/T.

Number 2 is most definitely a W/T. (You can clearly see the lines in the graft.) I was pretty sure #3 was as well, thought the angle on that one isn’t as handy to tell. Looking closer at the lines, it does indeed seem to be a saddle.

I’ve had the same experience with Temflex: works great, but if you wait too long to remove you get excess callous growth.

Were the unions well cut and tight? I seem to get lumps in places that don’t match up well.

I love the spray paint idea and didn’t know you did that. As you may have seen, I’ve been experimenting with that spray-on rubber coating as final step/seal of my grafts. I’m happy with it but regardless of how it works out, one thing I’d never thought about was how much I’d love the bright white color of my grafts that results. It makes them SO easy to find, easy to see new growth, etc. I’ve actually cut successful grafts off my trees while pruning them before, so I think this will help alot…just like you’re idea of painting them.

In a word; no. Anything with a tool was of course very well fit, but after 2 years I’m still grappling with W/T cuts which is what resulted in my walking away from grafting for a while. No matter the tool, technique, or how many videos I watch I simply cannot make a nice looking W/T without gaps. Next time I try I will look for a single edge blade, but I’ve tried a very thin Opinel, the Craftsman cutters, utility knife, and grafting tools.

I know I have to practice, but I was at the end of my rope last year and thought it best to donate the rest of my rootstock away and take a break.

I like a well fitting graft just like everyone else but to me it is secondary to a good healthy take.

Switch to a splice. It is idiot proof and I’m the living proof.

I’m strongly considering sticking to fall grating with T-buds as I’ve had good success with those taking. Haven’t actually had one grow fruit yet, so I’m not clear if the graft will hold up over time, but golly are those relatively simple!

I have done whip and tongues that were well enough cut but which I pushed together too far, resulting in those unsightly bulges. I thought I was being thorough!

A whip and tongue should line up just like a whip, meaning that the grafted pieces run together smoothly. The tongue helps hold them together while you wrap and gives you more cambium contact to promote healing, but does not, I think, ultimately result in a stronger union.

Just my two cents worth!

I agree, looks are secondary. If it grows and eventually fruits that is what counts.

I use a cleft 90% of the time, but wonder if callous overgrowth is partly caused buy a poor fit? Again I don’t really care as long as it grows.

I have done whip and tongues that were well enough cut but which I pushed together too far, resulting in those unsightly bulges. I thought I was being thorough!

Sorry I just read this, you have observed the same then.

My contribution to the Ugly Grafts. My Winter Banana. 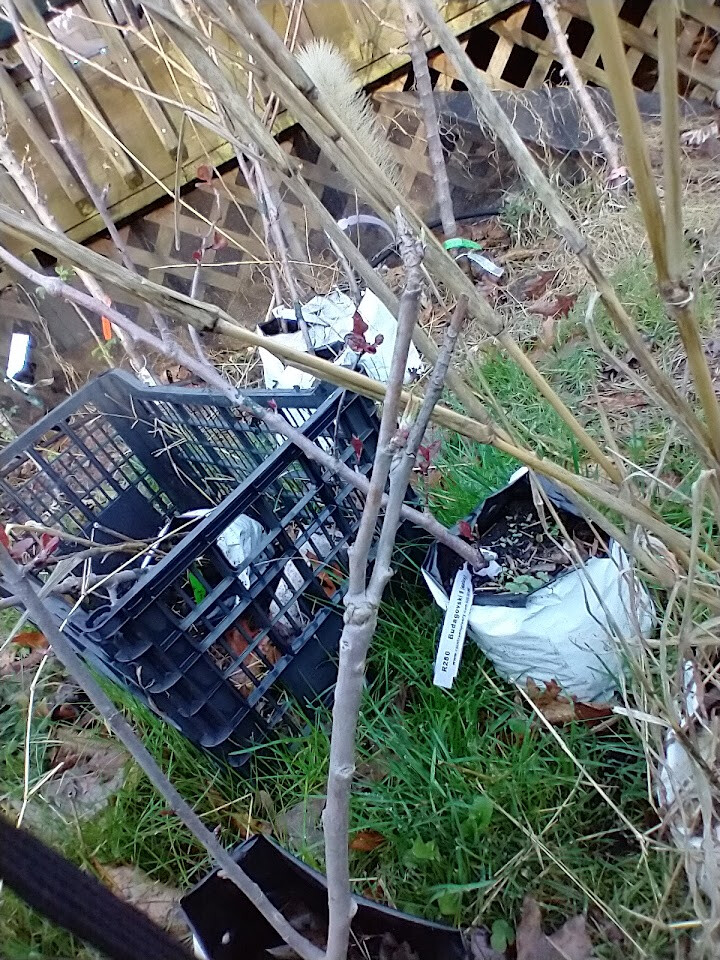