So here in Texas, it’s hot. My grower buddy who grew determinate tomatoes is pulling fruit off his plants, left and right. Meanwhile my not red indeterminate mostly heirloom tomatoes produced 2-3 tomatoes max, and decided it was too hot for them, so they were going to take a break. A long break. They are still on break.

For my part of the market, I like to grow not red tomatoes. So does anyone have any determinate only not red tomato varieties to recommend? Looking for next year. Please no heirlooms unless they are not red and determinate. They probably work great where you are at, but here in the cool part of Texas where the temperature climbs past 95 F every day since late May, not the best option.

Just curious why not an indeterminate like Lemon Boy Tomato? They are hybrids I realize so seed cannot be saved which I don’t like.

Determinates are supposed to set within a short window, indeterminates set over a longer period. If the tomato plant can set before the full heat of the summer sets in, I get more tomatoes.

I hadn’t heard of lemon boy. If I can’t find any non-red determinates, I will give that one a shot next year.

No experience with these varieties, but Johnny’s lists two: Gold Nugget and Sunrise Sauce. Three if you count the “red-orange” BHN 871.

@Fusion_power is sure to have some thoughts on this subject.

Yellow or lemon yellow tomatoes usually have insipid flavor. Orange tomatoes can actually be fully flavored, particularly if they have the b^og gene (beta carotene).

I’ll suggest an alternative to determinates. Look for some compact indeterminates. They have concentrated fruit set especially early in the season but they don’t stop producing like full determinates.

One of the better varieties I would suggest that is a compact indeterminate with heavy early fruit set is Jaune Flammee. Flavor is in the tart sweet group. I have seed of 97L97 and 97L63 which are very high carotene determinates. I’d be glad to send some seed but with a huge caution that when carotene is ramped up to 40X normal, flavor takes a huge hit. I usually mix the high carotene tomatoes with better flavored varieties for a boost in vitamin content without the hit on flavor.

You might look on Tatiana’s Tomatobase for determinate non-red varieties.

Clip the top off your non red indeterminant tomatoes after 2 flower cluster and it will bush like a determinant, with lots of fruit.

This year I’m growing Pertsividnyi Zheltyi, which is a determinate, or possibly semi-determinate paste type that has good taste and can be used for cooking or fresh eating. They are actually longer and skinnier than regular pastes, almost like long yellow peppers. They are fairly early.

It isn’t red, but has red/pink as part of the striping, so not sure if it qualifies, but Maglia Rosa is a semi-determinate grape type that is faster to produce than most small fruited plants that are generally quick to produce anyway. It is worth a try and is one of my favorite small fruited types for taste.

And finally, although it is red/pink, my earliest to ripen has been Limbo, which is a smaller determinate plant that is very productive. The first ones ripen a week or two before any other tomatoes in my garden. While it is a paste type in shape, it is a bit smaller than a roma and not nearly as dry. Because of that it tastes great for fresh eating, but can also be used for cooking. I donate several hundred seedlings to the local PTA plant sale and a lady came up to me this year who got a Limbo last year and said they made the best sauce she has ever had. I eat most of mine fresh. Here is one I just picked, although it will need a few days on the counter to ripen up. 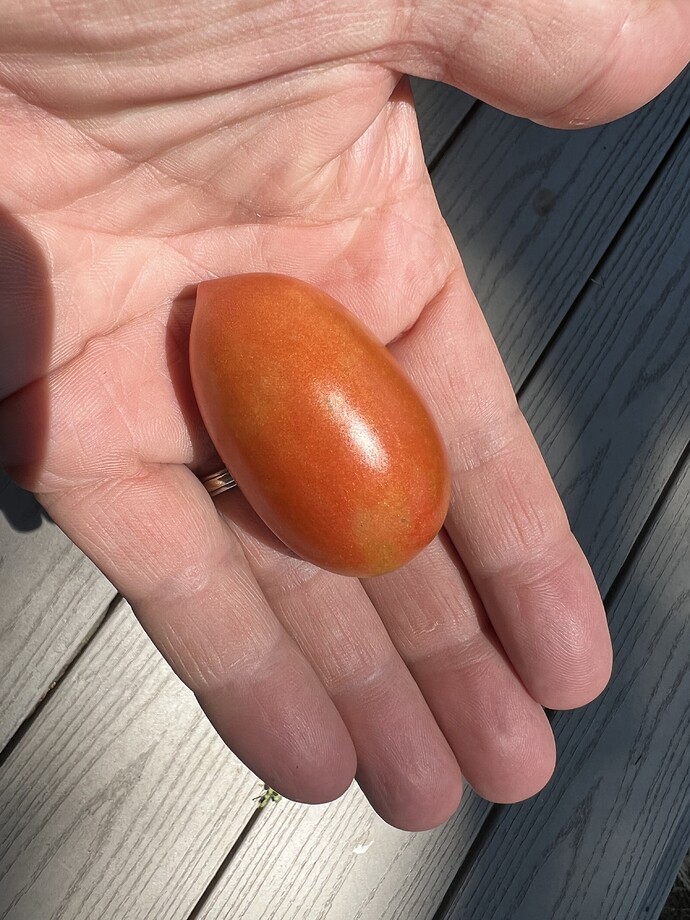 I can save and share seed from any of these if you let me know you want to try them.

And here are what the shape and size of the yellow pastes look like, although they aren’t ripe yet. I got a late start this season. 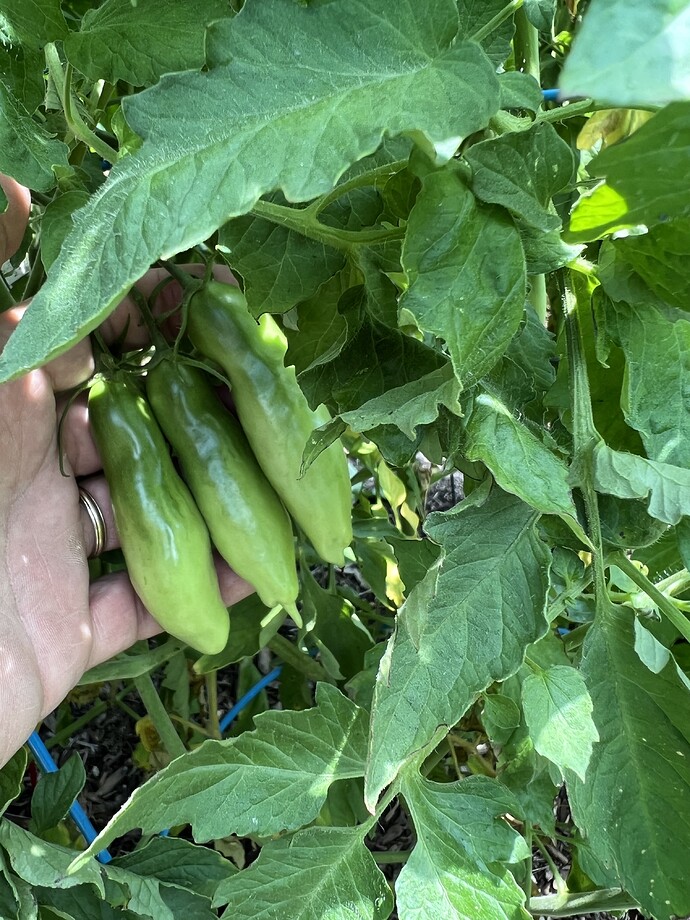 Here is a list extracted from Tatiana’s site that merges determinate varieties with yellow/orange varietes. Of the few I have grown, Golden Bison is a decent yellow and Banana Legs is a decent elongated variety. I’ve read that Morden Yellow is a reasonably good producer. I would generally avoid the varieties listed as Dwarf as they tend to be unproductive.

Yep, my family sells tomatoes and other vegetables at the local farmers market. There are two main kinds of buyers- people who want simple vegetables like the kind their parents or grandparents grew and tourists who want a few vegetables to make a meal at their bnb or something that will travel and they can take home with them. So honestly, if we had more non-red tomatoes, they may not sell as well. I haven’t reached that point in my production just yet though.
Paste tomatoes unfortunately do not sell well for us. When we have grown them in the past, people will buy a few, but my mom mainly ended up taking them home and cooking them into sauce herself.

Are there orange tomatoes that are actually orange? When I grew Chef’s Choice orange this year, it was yellow. Though I might have gotten the seed mixed up with Great White (produced like Great White did last year too…)