So, we just had a severe ice storm here in Tennessee. Freezing rain and sleet all day on Monday. Trees were completely coated in ice. Every limb and twig completely coated. Today, Thursday, the trees are still covered in ice. Would this thick coating of ice act as a natural dormant spray by smothering insects?

The ice coating was so complete that birds were unable to break through it to feed. I had starlings and blue birds trying to feed on my suet feeders - I’ve never seen that before as they primarily feed on insects.

Looks like we are in for another round of ice starting tomorrow!

Edited to add a pic from our back yard. 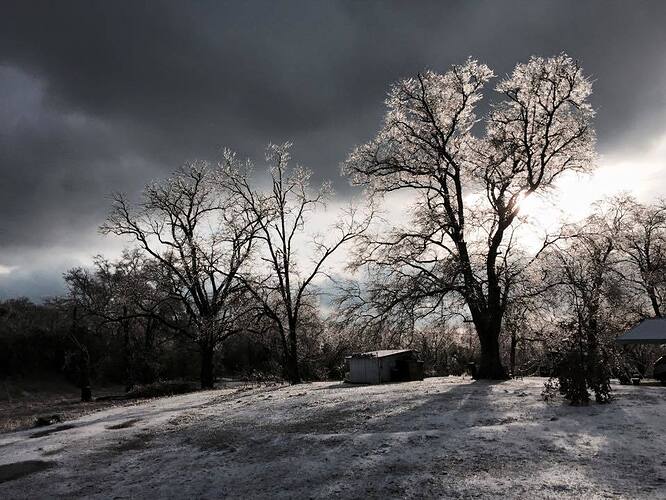 I don’t know about ice smothering insects but that’s a cool picture! You should frame it and enter it into the state fair.

I have no empirical analysis for you question, but my gut feel is that ice doesn’t provide the same suffocation effect as oil.

I remember I once read various species of scorpion can be frozen solid in a block of ice then thaw unharmed.

I suspect the difference b/t oil and ice is that ice has no penetrative ability in the insects cuticle. Plus when it’s cold enough for ice to form, the insect’s metabolism is so slow it probably doesn’t need much oxygen.

Of course I’m no entomologist, but I thought I’d offer some answer.

I tend to agree with Olpea, the oil clogs pores on the bugs in a way that water does not.

I don’t know the answer to your questions, but just wanted to thank you for that great picture. I love the light, the ominous dark clouds and everything about it… although I guess when you’re living it the beauty may not be as welcome. Good luck with the new weather and I hope we all get a early Spring thaw.

I got to tell you, there’s nothing that beats a total and complete crop failure as a natural pest control. We basically don’t have any pests after 3 straight years of this.

Most of the pests that oil targets are usually controlled by mother nature in the form of beneficial insects. The suckers oil doesn’t control, like leaf hoppers, are what can sometimes plague the orchards I manage. I haven’t seen any scale or mites in the orchards where I don’t use oil for a decade.

I was hoping being encased in ice for several days would have done the trick. Oh well, guess I’ll still do a normal dormant spray as planned.

And, thanks for the positive comments on the photo - I’ll pass them on to my wife

Nope… get a spray on there. I still have to spray my pears. I sprayed last winter for the first time…made a HUGE difference. It really does work quite well. If only i could get some days about freezing.

That photo is awesome!

What a great photograph!!! My trees are not quite as tall but are covered in ice as well. Too bad ice won’t work for a dormant oil. Beautiful pic! Mrs. G