The way I recommend people to prune all varieties of trees is generally to prune as little as possible but to remove all branches more than a third the diameter of the trunk at point of attachment. Worry about permanent scaffolds after a trees first real crop and only top the tree when it exceeds the desired height.

Everything else depends on special needs of any given tree and variety. Liberty may benefit from cutting a third of last seasons growth back when trees are in bloom to encourage secondary branching. By delaying it until then encourages more growth further back on the branch compared to dormant pruning where all stimulation is created an inch or two back from the cut.

Some varieties need branch spreading- a few bear sooner if you choose your scaffolds early and open the tree up before it begins bearing- these are the highly vigorous “woody” one’s such as Fuji.

If I had more than one Liberty on a free standing rootstock I would graft other types on all but one tree and do it early. I prefer grafting over varieties from the trunk and older Liberties often only let you graft low in the tree outward from scaffolds. They don’t tend to send out vertical water sprouts from the trunk- even when you top them.

only top the tree when it exceeds the desired height.

Alan- Several of my two year old apple trees are growing strongly toward the sky, not growing new laterals or growing only one or two way up high in a different zip code from the lower scaffold. Would you top them to force laterals? Suppose I could try notching above well positioned buds in spring instead of topping.

Footnote: Limbertwigs are very well behaved here: they spontaneously put out laterals all up and down the leader with no topping required after year one.

I notch trees above a node on the trunk to coax branching where it’s needed or you can score the whole trunk with a sharp knife just above where you need branching. Let the tree grow up and establish itself ASAP. Apples and pears are easy to guide after they’ve reached their desired height.

Lower topping will inspire branching but throws a tree out of whack hormonally. Actually, even for getting scaffolds to grow lateral branches you can use scoring rather than cutting back last years growth.

There are many ways to Rome, I just like to take the quickest root if the destination is the point.

Thanks, very helpful. In your experience do most scaffolds need human intervention (scoring, cutting back) to grow laterals off the scafolds?

Most varieties invariably produce adequate secondary and tertiary branching. Mostly all that is required to sustain a good economy of wood is removal of oversized wood- not just off the trunk but off the scaffolds that are best maintained as central leaders as well, with much smaller lateral branches coming off of them.

Often I will keep a surplus of scaffolds to compensate for inadequate secondary branching, but over time the permanent scaffolds tend to fill in as you gradually thin and then remove the surplus scaffolds. This is standard procedure with Honeycrisp- better more branches than over thinning wood early and ending up with excessively huge apples that tend to rot even in the best circumstances.

I am more likely to cut back the scaffolds of droopy varieties such as Ginger Gold to stiffen scaffolds and bring them back to more upright positioning.

Thanks, Alan, I will follow through. Summer pruning versus winter pruning, and the responses of the trees are still a bit of a puzzle for me.

I have a small yard and chose Liberty instead of Freedom, but I regret it (now that I had the chance to compare the 2, grown in the same environment, under the same conditions). I agree with Matt that Freedoms are tastier, bigger, better looking, etc. My Libertys are good, very good in pies (fortunately), but not as good as Freedoms. I think they are equally resistant to diseases…

I thought liberties break down too much for pie

I do too. Just wondering if they break down.

Just wondering if they break down.

Not really- they don’t turn to sauce or lose their shape, at least in my experience.

I’ll have to make one tomorrow. Have lots of liberties.

On my list too. I think I’ll work in a couple of yellow delicious and maybe a prairie spy as well.

My wife wants a tart, and I plan to make pasties for a hunting trip, so it sounds like it’s time for some crust making!

Not in mine either. In my experience, they break down just “enough”: they keep their shape, but soften a bit.
+Their sweetness/tart blance is just right to me! Delicious.

In any of these discussion of "A"vs “B” I think it’s important to remember how many variables there are. Some years my Liberties are just OK, some years they are greatgreatgreat; sometimes you find a surprise late in the winter -an apple that is wonderful by any measure! And I’ve some pretty bland ones that might have been held too long. So you pays yer money and you takes yer chances.

But don’t compare them to a Cox type apple, cause that isn’t what they’re about. They are, however, great exemplars of the Macintosh clan, with great disease resistance and productivity thrown in.

And yes, good for eating out of hand, great sauce requiring no added, repeat, no added sugar, better than decent cider, very good baked stand along or in pies, or tossed on the grill. And with care, capable of being kept in fair to good condition for three, even more months. The turn brown quickly, it’s true, but tossed in a salad with a little vinegarette you won’t notice.

By the way, I made and froze a pie yesterday. I recommend this crust: 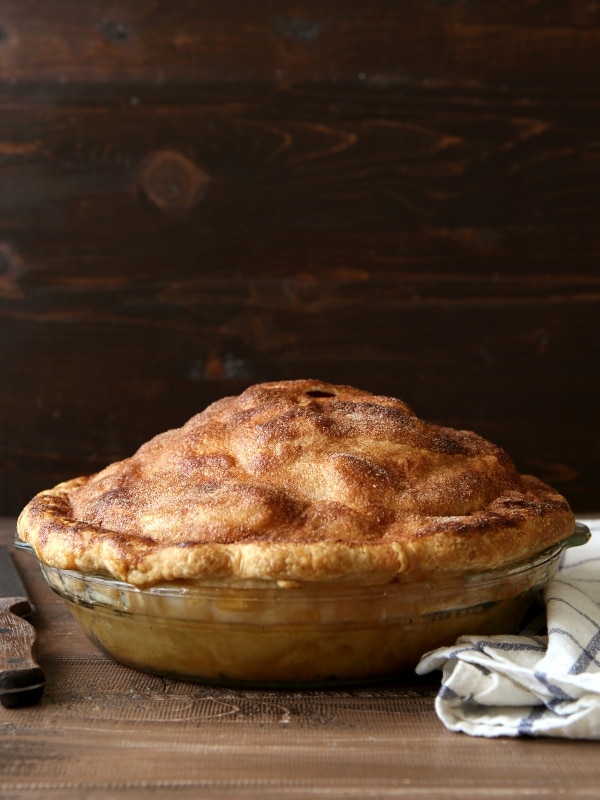 The flakiest all-butter pie crust is easy to prepare and practically impossible to mess up with my tried and true recipe and step-by-step instructions. This pie crust is my go-to for all of my pie baking and I’ve probably made it hundreds of times. I...

Trust me on this one- I’ve made (literally) tens of thousands of pie crusts from a dozen or so recipes and this one is head and shoulders the best.

I filled the crust with thinly sliced Liberties and Yellow Delicious that I had tossed with about two tablespoons of brown sugar, to which was added a generosity of cinnamon, a good grating of lemon rind, the juice of about half a lemon, and a small drop of vanilla, and a few pats of butter. IF you happen to have some brandy lying around a small drizzle wouldn’t hurt, but don’t get carried away with liqueurs and such. Pile it high, push it down and seal it up.

Bake fairly fast on a pre-heated stoneware if possible, and reduce the heat partway through to control the color. Should be ready when the filling boils out the slits in the crust.

The first thing I noticed about Liberty was that the leaves and limbs looked more pristine than most of my other apples varieties. These were grafted in 2016 and this year I had a few blooms and one apple that I think ripened correctly. Based on my one apple sample it was a great tasting and I’m hoping for more next season. I hope our low chill hours are not an issue for it. I don’t have Freedom so I will let others discuss it.

This late spring one of my Liberty apple trees started to brown up on its leaves. Within a week the whole trees leaves had it. So I took the precaution of cutting all of the limbs off just in case it would infect other trees. Not sure what the issue was, but we did have a very wet spring. It’s already growing well I’ll have to keep an eye on it next year. 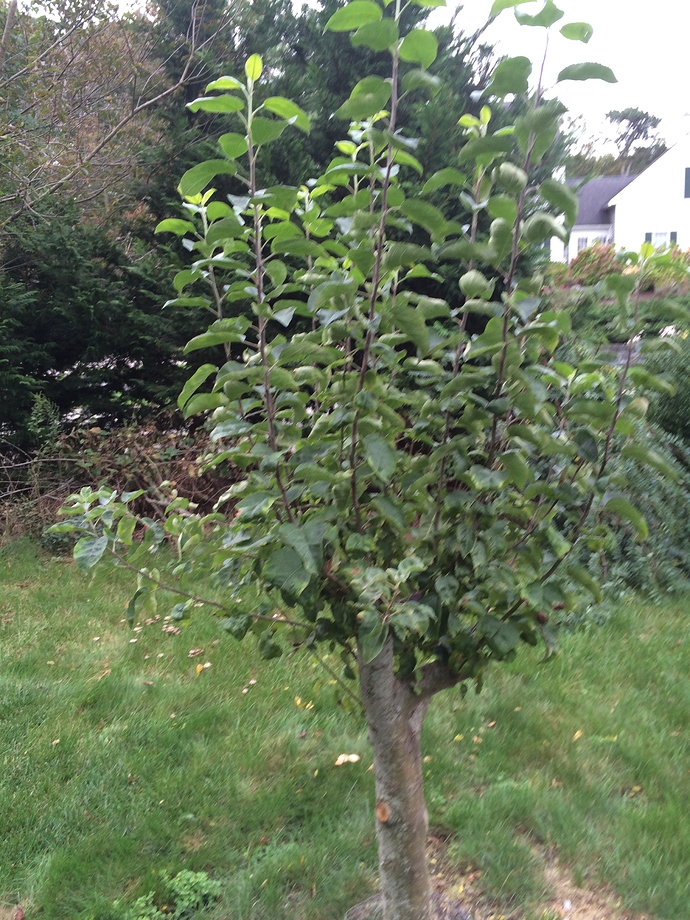 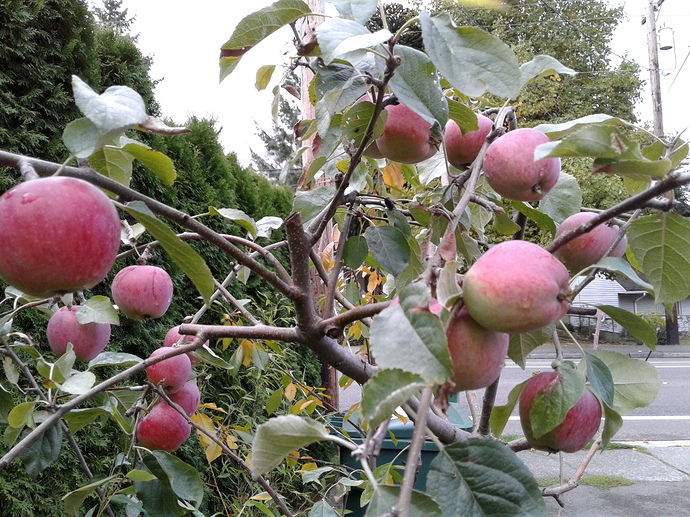 That’s great info for me, I just tasted my Liberty apple this year and was very pleasantly surprised ‘nothing wrong with this apple’ was my impression, it was sweet sprightly, crisp and juicy…I had a feeling that these resistant varieties were not ‘talked-up’ as much as some of the flavourful heirlooms because their only virtue was their disease resistance, now I know differently, and if you say Freedom is better than Liberty, that’s very helpful to me as I swing my attention toward some of the resistant trees I already have but haven’t sampled yet, and away from some of the more troublesome varieties. I wanted to ask the forum what they think of the fruit on the Liberty, Freedom, Enterprise, (I already have a good bearing on Novamac having bought bags of them years ago from a local )…these being some of my healthiest trees…and also what folks think of some other CAR resistant apples I’m pondering such as Belle de Boskoop, Sundance, Kidd’s Orange Red and Sweet Sixteen…but also of Bramleys which I do have but hasn’t fruited yet.