I am having issue with two peach trees, Can someone share what the disease is and recommended treatment?

The first pics are from a Victoria Peach Tree. I noticed it had whatr I thought was canker early in the season. It was very dark. I did not realize it was this bad until today. 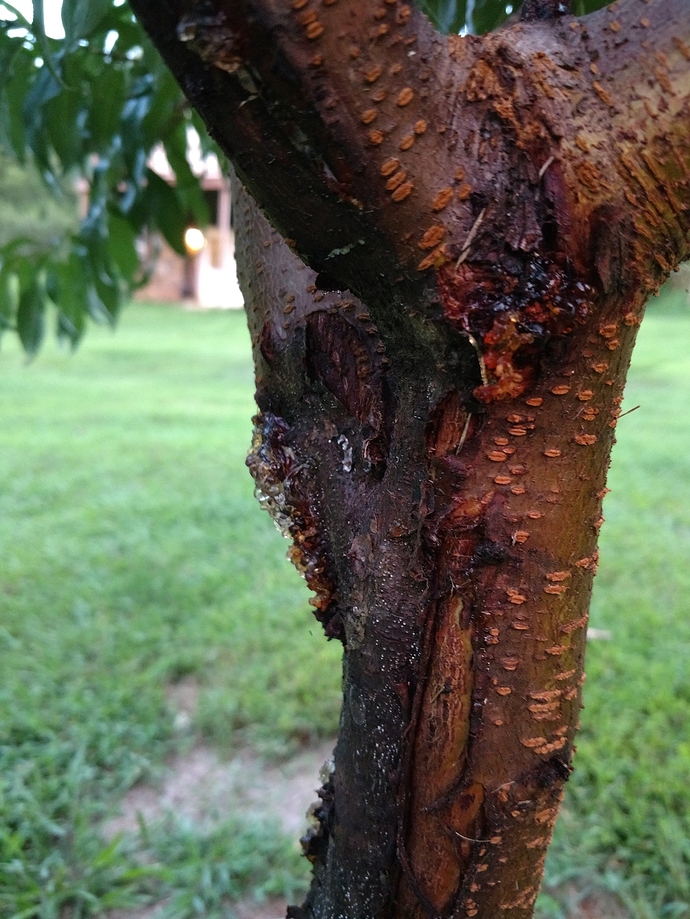 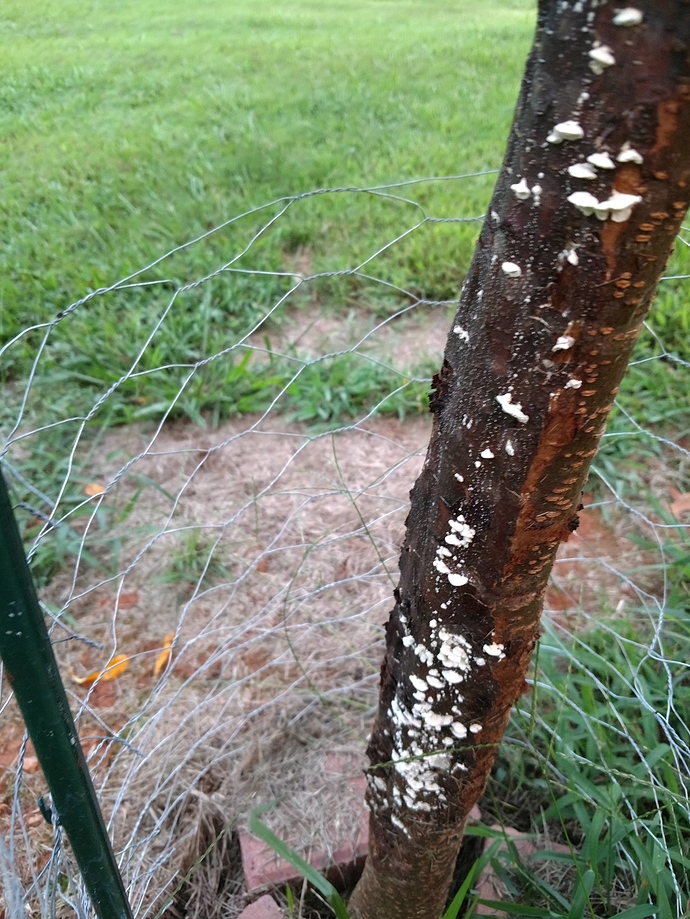 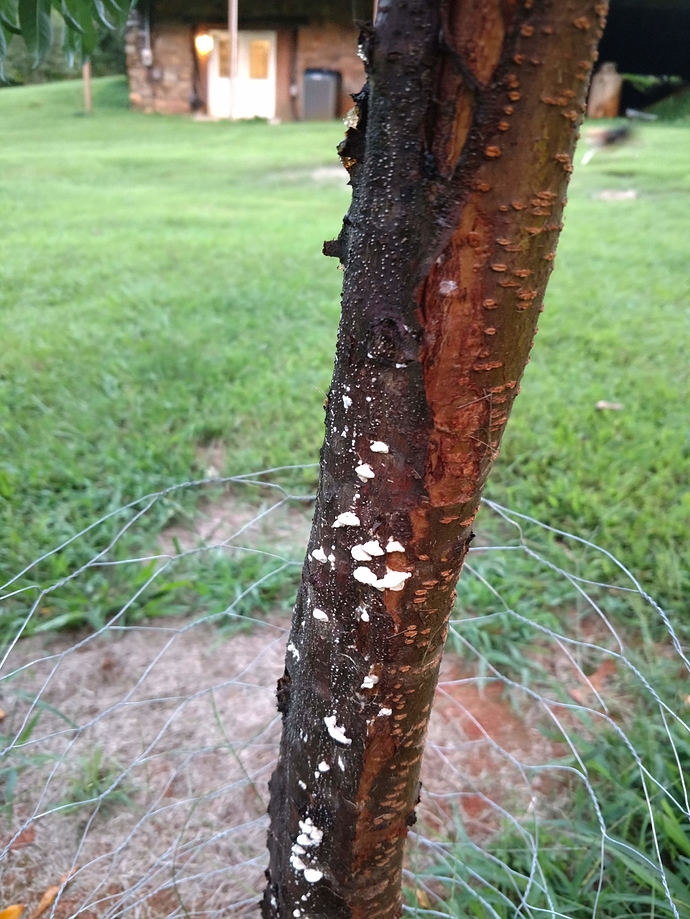 The next tree looks like it has peach borer damage. When I try and run a close hanger to find the holes I get nothing. But when I twist at an angle I can easily run the hanger underneath the bark parallel to the wood/cambium part of the tree and it will come out the other side of the tree. If it is not peach tree borer damage what is it? Should I take a knife and cut the bark back to expose the borer holes? 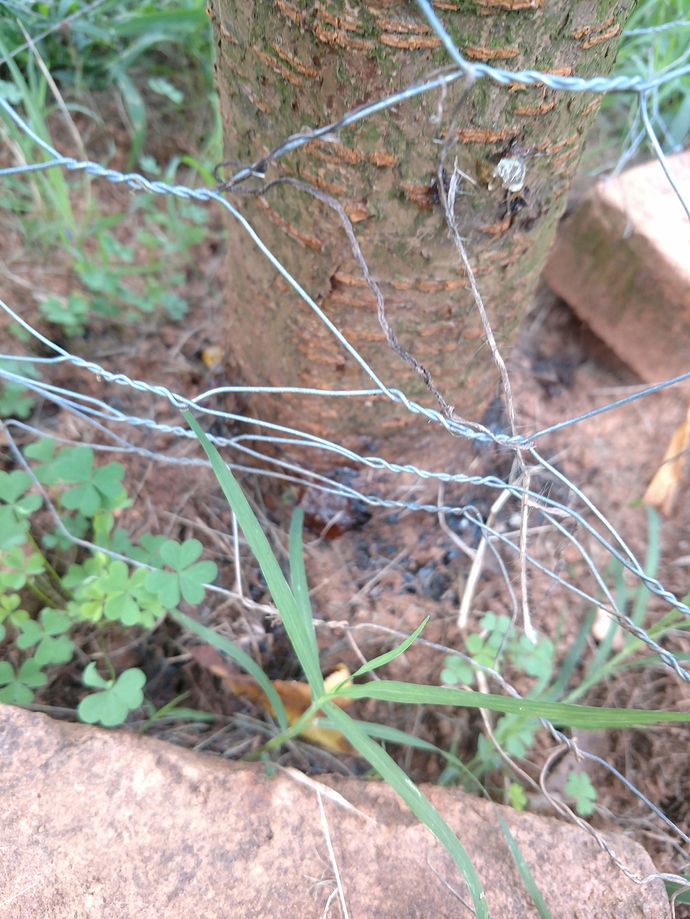 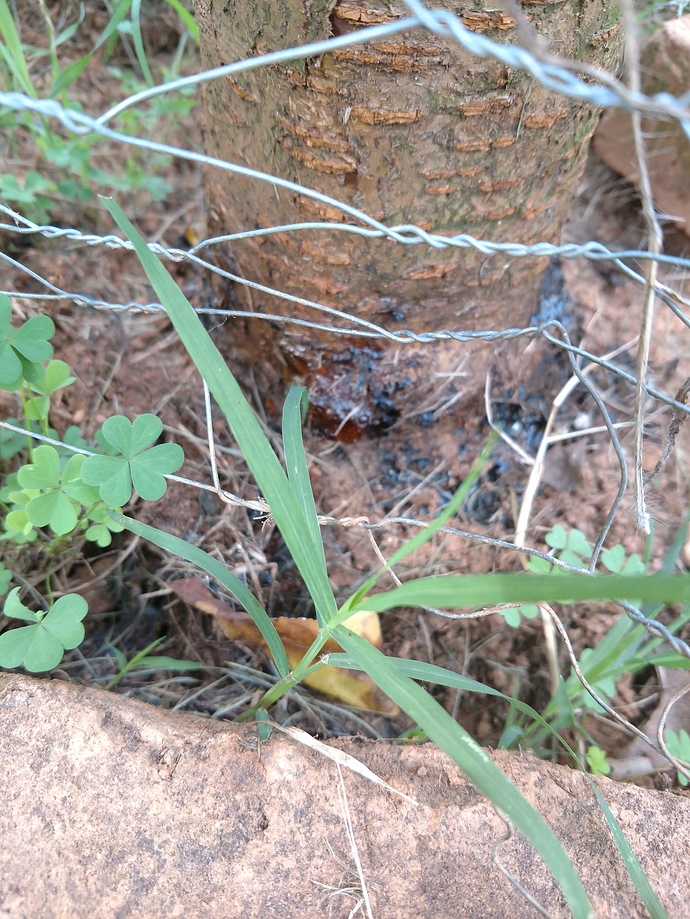 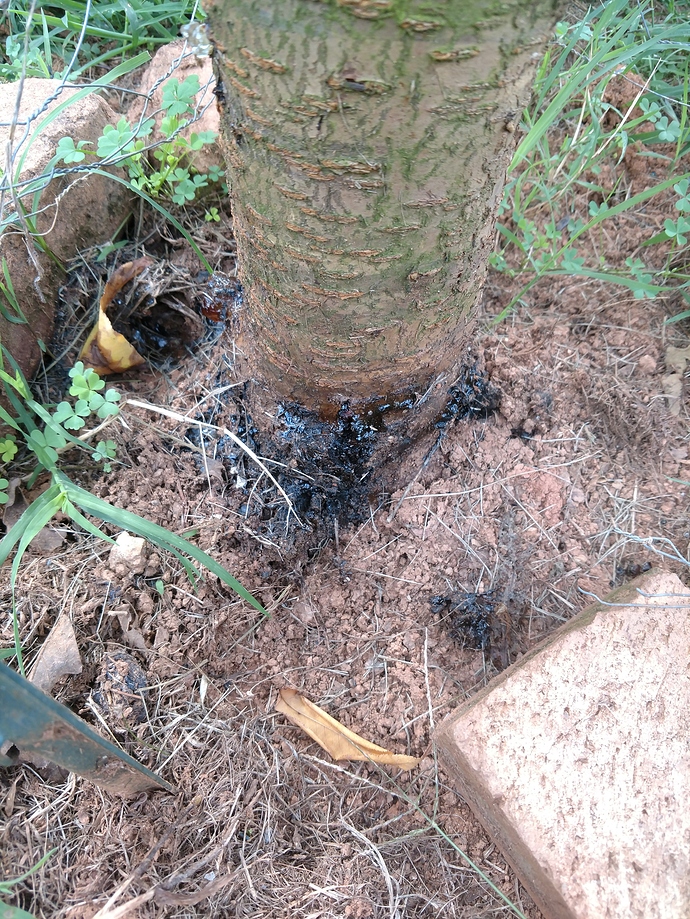 The first tree looks like a bad late case of gummosis, and the tree
is definitely in decline and IMHO should be replaced.
The second tree is obvious borer infestation. Dig around the bottom
of the tree and you may find the larvae, Larger older trees can often
over come a borer infestation, but you need to catch them early, and
spray to prevent later infestation. Get rid of all of the frass (goo) and
repair the area with pruning sealer.

After I saw the gummosis early in the spring what should I have sprayed to treat the infection?

I agree with @rayrose about removing the first tree. It appears that it has been fully colonized by wood destroying fungus that is now fruiting. It may have entered the trunk from an open wound last year. I would put that tree in the trash or burn it to reduce the fungal spore load in the orchard.

Once the disease reaches this stage, there is no cure. There have been many studies conducted by the USDA @ Byron Georgia, of which I had a very minor participation, and the only way to prevent the disease is by painting the entire young tree with exterior latex paint. You must do this for the first twoyears. That’s the time, when the disease spores enter the young tree. Somehow the paint prevents the inoculation of the disease into the tree.
It takes several years after the initial inoculation for the disease to manifest itself. Once it does the tree will slowly decline This method has worked for me on the last batch of trees that I planted.

So I finally got a chance to dig around the contender. I found two Peach borer larva. Is two the normal amount? I tried running an ice pick like tool in every spot where the tree was bleeding - I have no idea if I go any bores in the tree with the pick. How do I know if got all of the borers? 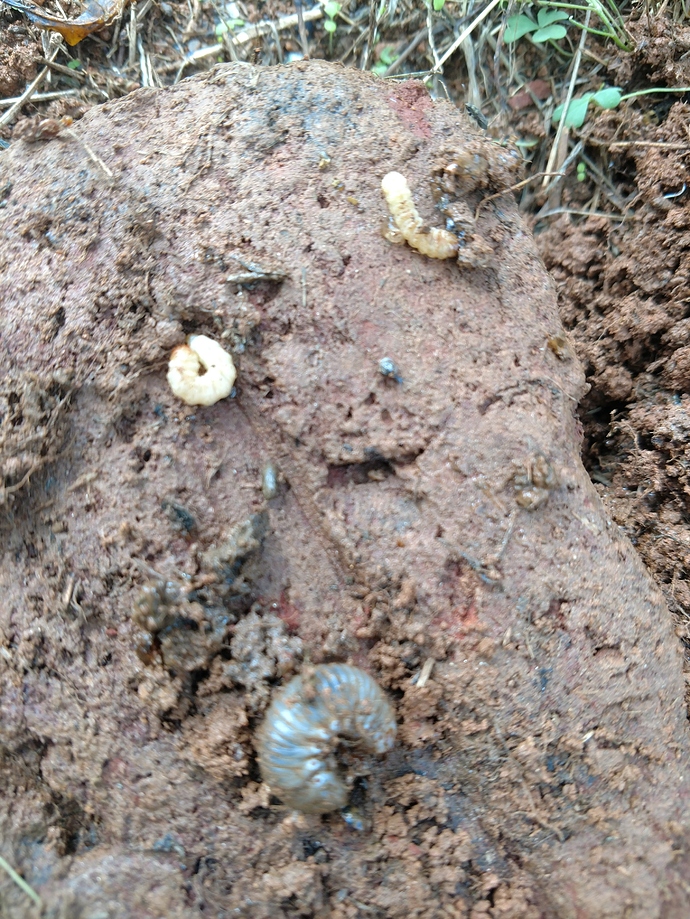 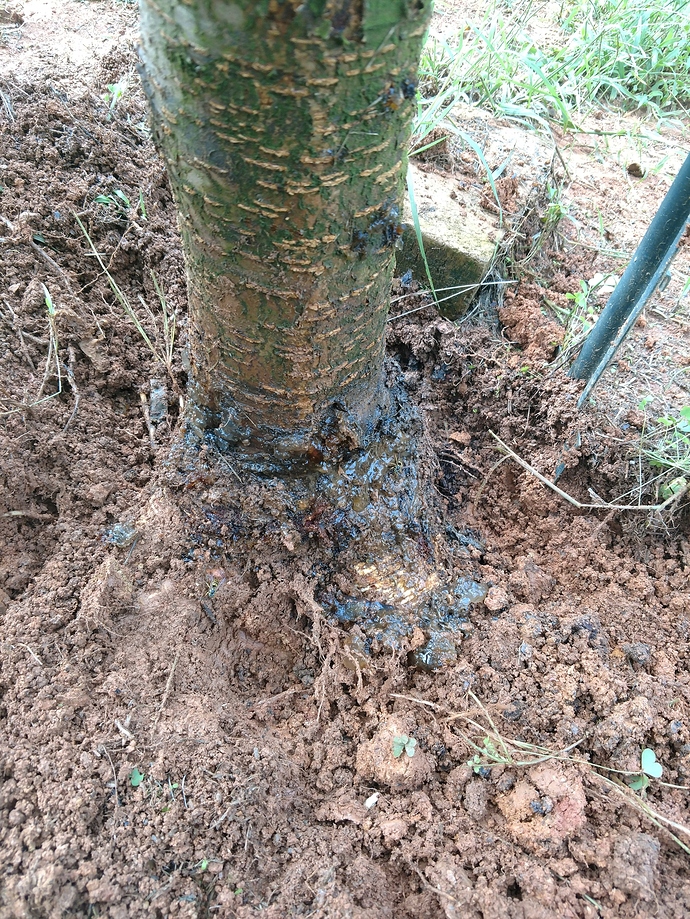 A wire cut from a clothe hanger is a better tool because it can be bent, Once you poked a wire in, you may want to poke around to see where the wire could go in deeper. Sometimes, a hole is straight in. Other times, it vertical up or down the trunk or even side way around the trunk.

I belive each hole will have a larvae. I poke until I got pieces of it out knowing it’s dead.

I will try a clothe hanger tomorrow. What I don’t understand is why am I finding the larva in the dirt? I checked all of my trees today. One more definitely had a peach borer infestation and again I found one larva in the dirt and I have two more trees that look like they may have peach borer holes. When do the larva stay in the trees and when are they outside of the tree?

Not sure why but mine were all inside their holes. I think I got 4 from one tree and I noticed the goo quite early.

Take dirt around the base of your trees off a few inches below a soil line. Some of borers make boring holes below a soli line.

Someone like @scottfsmith uses neem paste to protect bases of his trees against borers. Others spray chemicals.

When do the larva stay in the trees and when are they outside of the tree?

They are usually in the wood, they may be moving to a new spot through the dirt is my guess. The only time I find a lot in the dirt is when they are coming out to molt but thats in May for me and would be June at the latest for you.

This time of year you need to thoroughly examine every inch of bark by the soil line to look for holes or paths. It takes practice to find the tunnels, they tend to head down. Make sure in the May-June timeframe next year that you have some poisons at those tree bases so the ones left will die coming out and the moths that made it won’t be able to lay eggs there.

No matter what. The sun has nothing to do with it.

How deep do the Peach borers go? I am not finding any peach borers in the tree and the trees are still oozing. Any suggestions?

If you don’t find any borers or frass, then your tree is stressed
for some other reason, usually too much water(rain).

So I took a knife to my Contender peach tree today. It is girdled badly, see the pics: 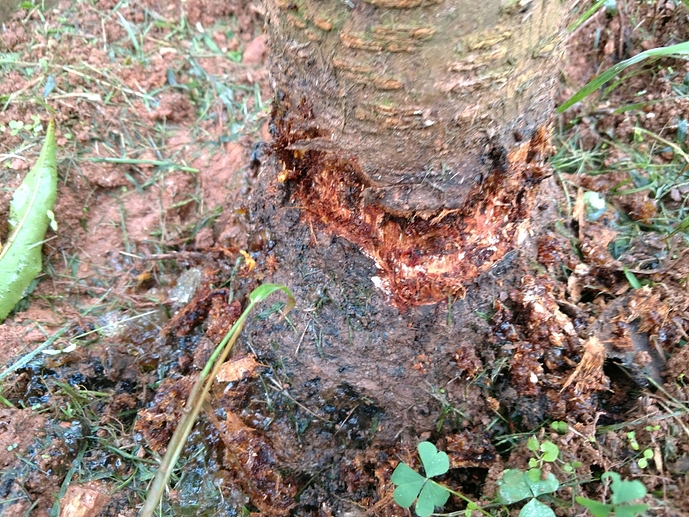 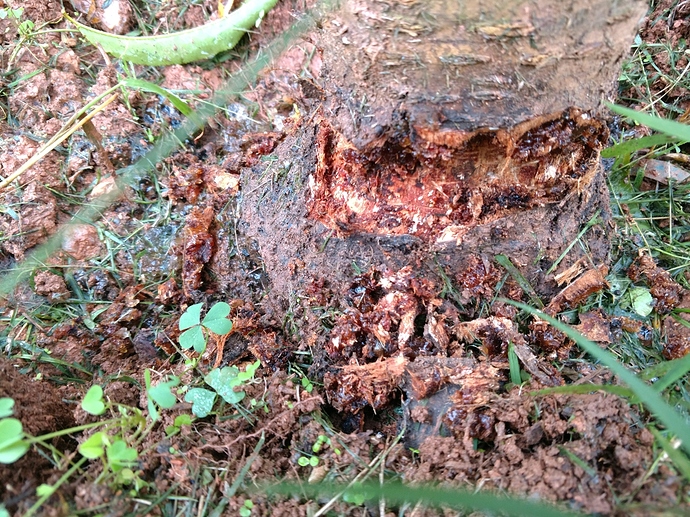 I have yet to find any borers in the wood, I did find some in the surrounding soil (see earlier pics). I will take the clothes hanger to the tree again later today. I am going to cut the tree out so anything I do now is a learning experience.

So I checked all of my peach trees at the house and at my fathers farm. I had damage to 10 plus trees (did not count). On all of the trees with the exception of one the larvae were below the ground line. Just as a lessoned learned and help for other people running a clothes hangar in the holes does not work when the larvae are below the ground.

Some of the larvae were brand new - not much bigger than a piece of thread. It took a lot of effort/digging to find and see the smaller larvae. On each tree i dug around the tree as deep as I could go without damaging the main roots, killing larvae and the soaking the tree/exposed roots with 36% permethrin. I actually saw a mature peach tree borer land on one of the trees, so I know they are still active.

I read through another thread about treating the trees for peach tree borers and I am confused by what I read. Raw Neem Oil, Triazicide, Lorsban, Permethrin were all mentioned. In Virginia I am 90% certain my season is long for Peach tree Borers - likely July through October, maybe earlier. Lets just assume 3 months. None of the chemicals mentioned will have a 3 months efficacy. I think Permethrin last up to 14 days, assuming no rain (may be 10 days I will have to check). So do you spray every 10 days? Depending of the potency of Pemethrin you are limited to the number of times you are suppose to use it on fruit trees - example 38% permethrin is supposed to be limited to 3 application a year on peach trees. Does the limit on applications apply when using it on the base of the tree only? Anyone know how long neem oil lasts? In the other threads people are talking about 1 or 2 applications a season - I do not see how a limited number of applications will work.

My peachtree borers are highly timed, they all come out in late May. They also only have one season a year. Since you are a bit south you should be in June sometime. You may have had a few which are off of the normal tempo.

The things that look like thread I would guess are nematodes or some other kind of worm, not borers. The borers are never long and thin like thread. Nematodes are attracted to wounded areas and I often find them in areas of borer damage.

The raw neem treatment lasts a long time, my trunk bases always look different from the neem coating. The potency wanes but its probably good for several months.

Most of the borer holes have at least a start around ground level. My method for digging them out is I go around the trunk base poking with a knife tip (knife up and down so as not to cut off the sap flow so much) to see if there is any give. If there is give I dig in with the knife and find the tunnel. Then I head down with the knife until I hit the borer. I am using my grafting knife for this because I’m always carrying it. Once I find the hole a hangar would probably be less damaging if I had one. Sometimes in spring you will find them up not down, but thats not very common - they are nearly always down. They tend to be moving up and down, not side to side.