More importantly, is it possible for a hobbyist to make a small scale version? 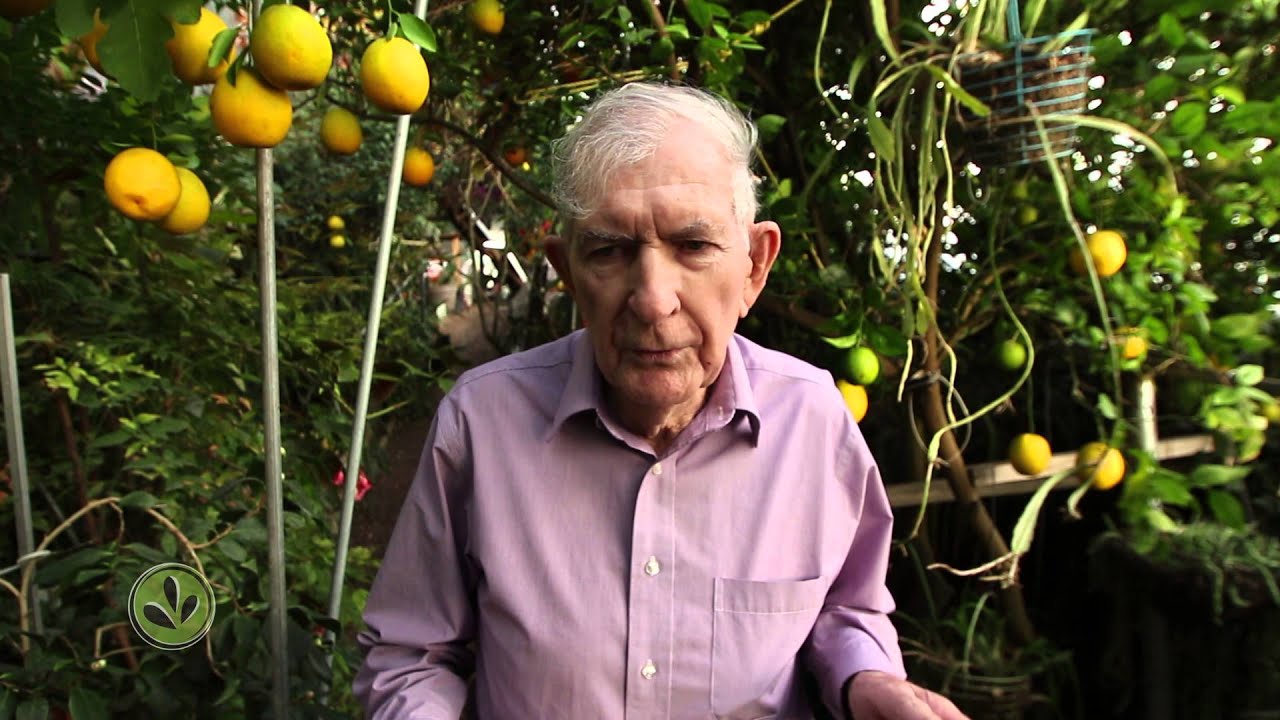 Well, the video you posted is a hobby non-commercial greenhouse. You mean a real small greenhouse? The problem with smaller areas is greater temperature flucuations. I think it would be very difficult to do with something like those harbor freight 8x12 greenhouses. Here is another one, large size: 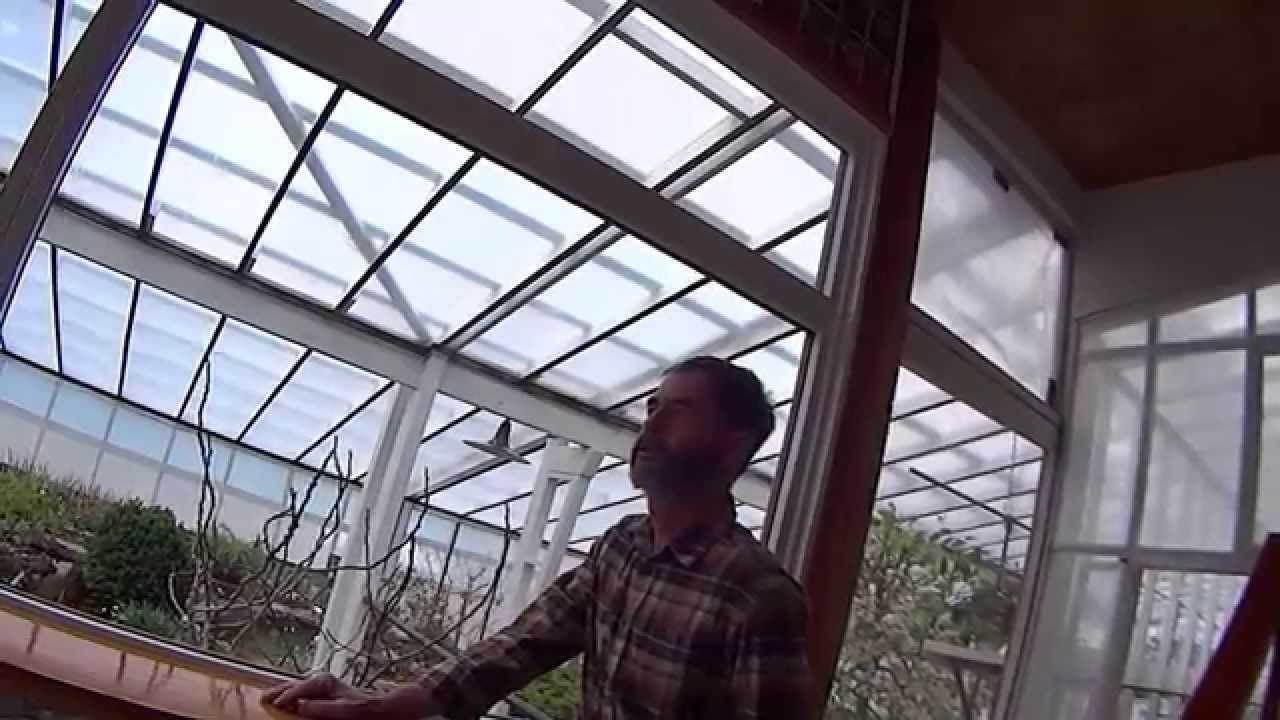 It would work in your climate for winter heating because your soil at depth is warm relatively speaking. It’s not going to work in summer for cooling because the soil is too warm. You could uncover during the freeze free season with no climate moderation needed. But you only have freezes a few nights in winter. Using a heater would make more sense to me.

There are several designs for GHs which are heated with earth’s heat and/or stored excess heat. As fruitnut mentioned they work to a degree depending on the system and local climate.

In general though, it is hard to store all the excess heat from a GH, at least in sunnier climates. And on the flip side it is hard to get enough heat from the soil or your thermal storage to keep the GH warm enough during real cold sunless periods. That is not to say these systems don’t work, they will much of the time; just that in many locations there will be extreme days which will require additional heat or cooling. Properly done, they can reduce the heating costs of a GH by 80-90% or more if you are lucky.

Small GHs have an issue that their surface area to volume ratio is very high. That makes them much harder to heat (and cool) than larger GHs. But this is an issue regardless of the heat systems involved.

FWIW, I did put an active heat storage system into my GH, a SHCS based one. It works pretty much as expected although I did opt to have additional backup heat which does get used over the winter. However if I wasn’t over-wintering citrus and some other tender plants the backup heat would not be needed, I think.

You can build an indoor wall of water, about 3 ft high, 1 ft wide surrounding the greenhouse, except the doors, to buffer temperature fluctuations. Might be good for aquaponics while you’re at it.

A friend of mine uses underground thermal circulation where they buried long pipes of plastic tube (not metal, because metal quickly dissipates the temperature difference instead of tapered through the season) about 6 ft deep and running horizontally under and around the green house. Only powered by blower to keep the temperature of the greenhouse stable. Bury the pipes deeper if you’rs in lower zones. The pipes are the heat exchangers. The more soil volume they run through, the greater is the buffering capacity to keep the temperature of the greenhouse stable, driven only by air blower. They’re called earthtubes.

I have a 10x12 greenhouse that costs me a fortune to heat in the winter. I’ve read everything I can get my hands on about how to lower my heating bills. The Internet is full of people with ideas about thermal mass, hydroponics, the warmth of decomposing organics, etc and how they will one day make it work. I’ve found a total of zero people who are actually making it work inexpensively for a small greenhouse without spending a whole lot of money up front. There are those that say they didn’t spent much money, but you read what they did and it turns out they have access to free pipes, a backhoe, etc etc.

It takes a terrific amount of heat to keep a glass greenhouse warm when it’s dark and well below freezing. It takes me three space heaters running 24/7 just to maintain 50 degrees. That’s a lot of BTU’s!

It takes a terrific amount of heat to keep a glass greenhouse warm when it’s dark and well below freezing. It takes me three space heaters running 24/7 just to maintain 50 degrees. That’s a lot of BTU’s!

I agree. My bill has been running $15 per day lately.

Ouch! I was at about $7 a day mid-winter. Saying I have a greenhouse and it’s great because I have free vegetables in the winter is like when I tell people fishing results in free fish for dinner. Ha ha! Sure I’m eating cucumbers and eggplants in Z7 right now, but if I were foolish enough to do the math they are probably $5 each…

I’ll be digging down 3-4 feet for my greenhouse, but I do plan to open it up in the summer time. Airflow is also a big consideration for me for that reason. I only plan on growing sub-tropical fruit trees for the most part, so I don’t need temps really moderate, just above freezing really.

It depends on your goals, but I think it certainly should help with reducing a heating load during the winter, and I plan to have a backup so that I don’t lose years of work.

Even heating a greenhouse, with some of the new Zill varieties of mangos, I feel it’s worth the cost, but then again, maybe I’m crazy.

I considered burying some earth tubes, but I think it’s more hassle than just a simple partially sunken greenhouse. Sump pump to keep it from flooding, and bermed slightly to keep too much rain from infiltrating directly should hopefully do what I need.

What earthtubes do, is increase the volume of dirt that you can exchange heat with, and increase the surface area available for that heat exchange. That’s a good thing. But not enough in most cases for year round use.

Passive heat exchange is a self limiting process. At first the dirt is nice and warm and gives up heat readily. However the more heat you draw out, the more it cools and the less effective the transfer will be. Same is true in the reverse direction when you are trying to cool (eg pump extra heat into the dirt). And since the dirt itself does not quickly move heat to/from the surrounding soil that limits what can be accomplished with a passive heat system.

That does not mean it doesn’t work, it typically does at the beginning of the season change. It just means you are not likely to be able to pull enough heat to keep a small (or even a large) GH warm when its 0F outside (and the same when cooling and it’s 98F outside). As the size of the GH goes up it improves a bit, because per sq ft of floor you have less glazing, but even then it is usually not possible to entirely heat/cool a GH with just soil heat exchange.

There are certain niches where the system can work quite well. In sunny climates, at the beginning and end of summer is a sweet spot. Extra heat during the day can be put into the soil then drawn out at night in the spring (and the reverse in the fall). Without extra heat one can add roughly a month of growing temps to each side of summer this way. BUT it will not heat the GH thru the winter. There are spots where such a system might be enough to carry you thru winter (depending on what you are growing), but they are the exception rather than the rule.

I’m not really certain how well earth tubes work in practice, but the idea is also to store heat from the day in the ground during the winter, when temps can get pretty hot in a GH. Not just for cooling, but to pump extra heat into the ground. Does it work? And what you want it for? If you’re trying to grow tomatoes all winter, my guess is that it won’t be enough for that.

The SHCS system I put in my GH is an earth tube system (with the heat storage soil being all inside the GH). It does work, to an extent. It does not keep the GH warm enough to grow tomatoes all winter without extra heat (there are issues with insufficient light too during the winter).

It is most effective when the heat/cooling needs are low, such that extra daytime heat is more or less enough to carry it thru the night, and another sunny day is coming the next morning. I do probably get 4-6 weeks of season extension from it before turning on the supplemental heat.

The real problems with this and most “passive” heat exchange systems is that they cannot move the quantity of heat at the extremes, when it is very cold or hot. That and due to the change in temp of the heat storage media their efficiency goes down the longer you use them.

Thanks Fruitnut. I’m starting to think I may actually be in zone eight or nine. I recorded a couple of nights were dropped down to -10 Celsius at my garden. A bunch of my citrus trees died. The area I’m using has no power available, and structures need to be fairly strong or removable to withstand typhoons. Some of the area I’m using is also on solid rock after about a foot or so.
I’m not sure of the terminology, but things from plastic covered tunnels to large unheated green houses appear to be very popular here, mainly to extend the season for vegetables. I was interested primarily for fruit growing, particularly citrus. Mainly just to keep them alive, In good shape,and not dropping leaves during the winter.

I know what you’re talking about. This is one of the problems with getting information off the Internet. . .

I meet a farmer in the carst limestone region of Kentucky ,there were caves under his farm, and sink holes,going down into the caves below.
He said he always hated the sinkholes as he had lost cows and things in them.
Then he built a greenhouse next to one and installed duct work and a large fan blowing the air from the sinkhole into his greenhouse
55 deg. Year round. He really likes it now !
Wish I had one !