Do I need to pick GoldRush apples before 27 degree night?

Hello,
I found this forum after dropping off Gardenweb when Houzz took it over. So hi again! I am a new apple grower with a Goldrush tree. My tree has a bunch of apples this year – they aren’t ripe yet, and I’d rather leave them on the tree a few more weeks. It’s forecast to get down to 27 degrees on Sunday night here: according to Weather Underground it should be below 30 for about 4 hours, and I think our little microclimate is often a few degrees lower
than the forecast. (I am in NY Ulster County Zone 5b/6a.) I read a post Alan Haigh made on GW/Houzz which seemed to say GR could take temps down to around 22 (?) for a few hours without a problem, but of course I’d rather pick them all unripe than ruin them! Thank you for any advice.

I’ve left Pink lady on the tree down to 18F with no apparent damage. Don’t remember how long I stored them afterwards. That’s where it might show up. I probably won’t risk 18 again but don’t think 27 will hurt your apples. Maybe others can chime in as well.

Welcome to the forum!!

Thank you. I doubt we’ll be storing them long as we’ll be eating them fast! And I forgot to say thanks to Scott for starting an independent ad-free forum.

You should consider putting your Goldrush in the refrigerator until December. They don’t achieve their superior flavor until then. Ed Fackler used to say, if you eat them too early, they can taste like “battery acid.”

Ed Fackler used to say, if you eat them too early, they can taste like “battery acid.”

No, he said they DID taste like battery acid off the tree. But he’s a chain smoker with a cloudy palate.

Just kidding, I love Ed (and hope he still lives) but I like GR right off the tree when its ripe- fully yellow with a red blush. It’s still good out of storage but I love the highest acid version.

It’s probably almost as tough as Pink Lady, although just because an apple stays hard after a deep frost doesn’t mean it will store as well after. That is info I can’t seem to find and haven’t really tested.

The apples should be fine if temps don’t get below 24 anyway, and will stay firm well below that. Green GR’s aren’t worth much so try to hold off as long as you can- even if it does go below 24 before they are ripe.

Thanks. Matt, I like “battery acid.” In fact stored GoldRush are too sweet for me. I agree with Alan that fully ripe, right off the tree, they’re sensational. We got the tree after buying a bunch of GR from a local orchard, and I liked them the best when we first got them. Don’t get me wrong, I’ll eat them happily after a few months’ storage, but just not AS happily. And thank you for the confirmation, Alan, they’ll stay on the tree a while longer.

I have either Jonagold or Fuji, not sure which left on trees. Temperature will go below freezing tonight. Should I crop them. THanks!

It may go as low as 22 tomorrow here and I will likely pick my Jonagold and Baldwin. I’ll leave Goldrush and Pink Lady on their trees. It probably won’t be cold enough to hurt any of them but the first two are about ready anyway, if they are a bit green they’ll store better.

I think it will be 30, may 28 tonight here in PA and lower tomorrow. I will pick them today, only a few. that is it for this year. thanks Alan

Went out and checked mine (it fell below freezing here also last night), so far, don’t seem hurt by it. Tonight is supposed to be much colder though.
I picked one yesterday to see how close it may have been to being ripe, It was juicy (maybe better described as “wet”) with nice texture, but the flavor was horrid and it certainly fit Fackler’s description as “battery acid”. They look beautiful, both the apples and the foliage are still pristine.

I wonder if the freezing temps (even if not damaging the apples) may shut down any further ripening process? One thing that is abundantly clear to me…this apple requires a far longer season than I have. It snowed here yesterday, yet this apple needs 3+ weeks yet.

I wonder if the freezing temps (even if not damaging the apples) may shut down any further ripening process?

The freezing won’t shut down ripening. The primary factor will be temperatures going forward. Some warm days and they’ll continue to ripen. Eventually you’ll need to harvest and let them continue to ripen in storage. They do ripen in storage at 30 something so will faster on the tree if it’s warmer outside. The advantage of being on the tree is packing in a little more sugar/starch that will make them sweeter. In storage acid will drop and starch will convert to sugar making them taste much sweeter.

Apple leaves are very frost resistant so that part will continue to function for a while.

Maybe they will mellow and sweeten up in storage. Thanks for sharing your experience. I have a pair of Goldrush apples still hanging under similar circumstances. I will pick them as soon as I can get up there again…

Oops. I wrote the previous message before reading Steve’s sage advice. So maybe I’ll let my apples hang quite a bit longer…

It may get down to 21 tonight here but the Goldrush and Pink Ladies are staying put. A little frost never heart any apple I’m trying to ripen. As FN says, if the tree still has decent foliage the apples will continue to ripen on days in the 50’s and above.

It was 25 when I got up this morning and all the apples out there appear unaffected.

Matt, I’m thinking they won’t ripen in storage if they are picked too soon. Last year I harvested them right about this time and they went bad quickly. I’m thinking the great keeping abilities etc must not manifest itself unless it was at least partially tree ripened to begin with. The seeds of the one I sampled yesterday were like a mocha brown…I kinda expected them to be darker. I’m thinking they have a ways to go.

Also, the skin is again tough and kinda bark-like again. I’m not at all fond of that. This apple has so many positive attributes though that it’s a darn shame it couldn’t be a pinch earlier. Mine have remained unsprayed since sometime in July I think and there isn’t a single solitary tiny mark or flaw on any of them…not even the slightest blemish of any kind.
I’d definitely recommend this apple to anyone who likes it and has the season for it. Hopefully I can get through tonight unscathed, that alone will buy it another 10 days at least.

I understand how the frost may not bother them, but the freezing seems another story.
I can’t understand how freezing temps don’t cause the cells to expand and rupture…like it would on any other fruit. Does sugar content aid or abet freezing?
I’m gonna give it a go, but I’m a bit skeptical I must admit. Seems everyone is in agreement that it is preferable to early harvest, so we’ll see what happens.
This cold aside…this has been a truly spectacular year for apples. For that I’m truly grateful to mother nature. A wonderful year!

Sugar is an antifreeze. Ability to withstand cold damage seems a combination of sugar content and general firmness. I’ve not sure at exactly what temp causes GR to turn to mush but have been very surprised to see firm fruit well into Dec most years.

I don’t fault any skepticism, when you google for info on the subject you will find nothing about the ability of some varieties to hold up to this level of cold. Leave a couple fruit on your tree and find out for yourself. Or leave them all- no point in harvesting still green Goldrush. If they don’t at least start to turn yellow they aren’t worth much, IMO. I’ve had years where they never ripened here.

this has been a truly spectacular year for apples.

This year has been very good for my Goldrushs and several others (Sweet Sixteen, Priscilla, and my best year for Ashmead’s Kernel yet)- some of my others were more iffy. At this point, only Goldrush, Sundance, and Crimson Crisp have any apples left on the trees. Of those, 80-90% are Goldrush. Here’s one of my two GR (both are loaded). 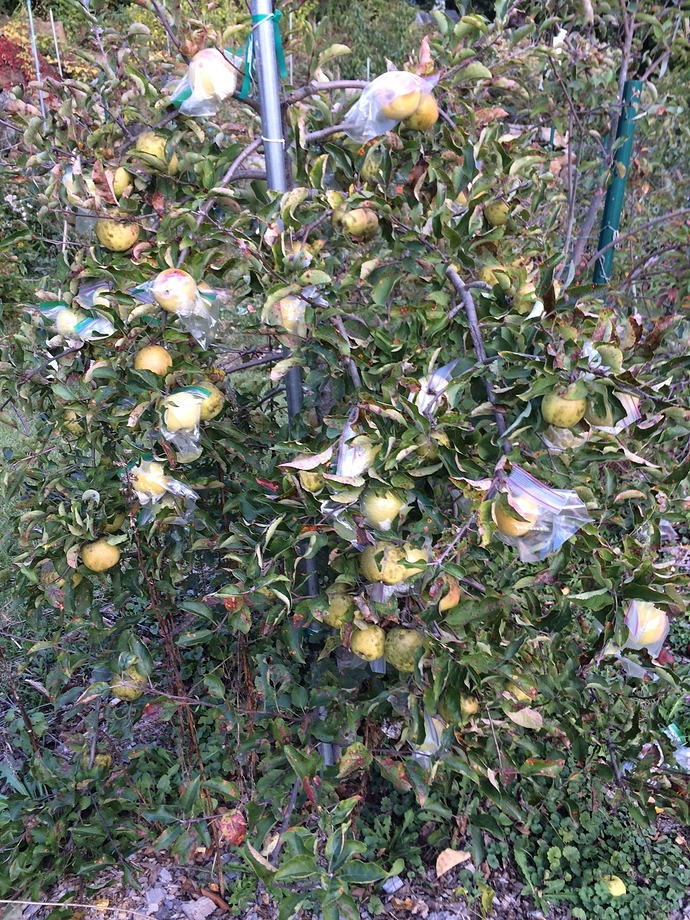 It was really cold today- it was 45 when I went out and 39 when I was done (in the dark). I bundled up for winter (4 layers, and some face protection). Here’s me picking as many kiwi as I could find. I wouldn’t have been suprised if my neighbors reported a masked man stealing my fruit 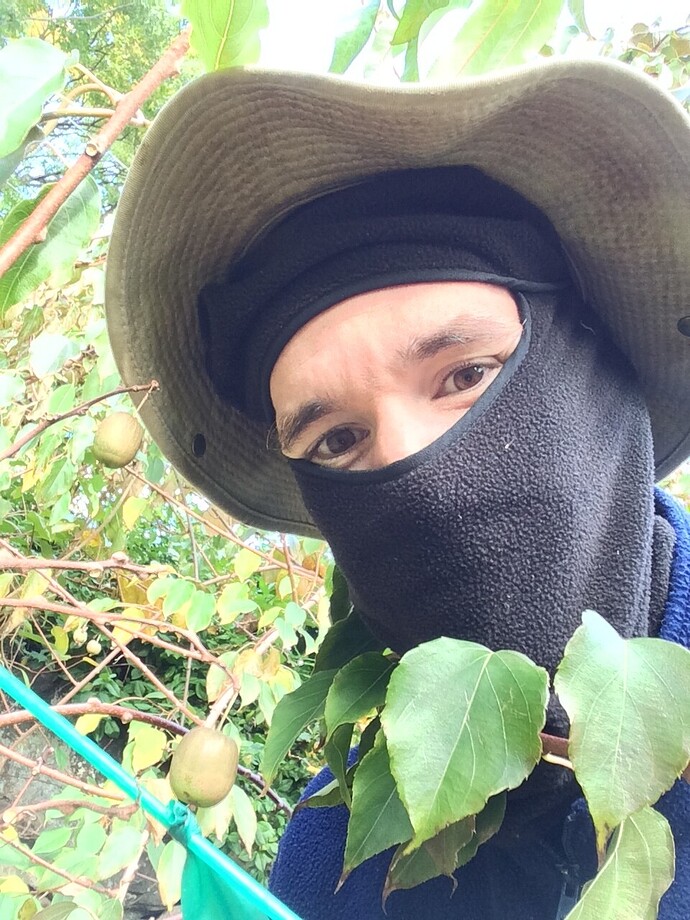 Bob,
Without a hat, you could be mistaken for a Ninja

Without a hat, you could be mistaken for a Ninja

A katana would have been helpful with the kiwi- they were very overgrown. I’ll probably post a thread on them soon.