I will eventually sell them, probably through Sandhill Preservation. First I need to do a lot more work to stabilize the genetics.

There are two lineages of blue egg laying chickens. Both have similar origin in a segment of viral DNA on chromosome 1. The South American lineage is the one most people in the U.S. are familiar with. Araucanas are one of the breeds from this lineage. The Asian lineage is not common in the U.S. but has the same basic viral DNA as the South American lineage with the exception that it is offset a few steps on the chromosome. So while I agree that there are probably araucanas in the background of my birds, they are not the only blue egg laying breed to come out of South America and the Asian lineage is not related to them except very distantly.

my siberians have Araucana genetics in them. the color is a much brighter blue /green than reg. strait Araucanas lay and also bigger. they really pop out in a mix doz. carton.

My DIL runs a heritage breed chicken farm so I end up with a mish mash of chickens. That said, my all time favourite is the Bresse. We stumbled upon it trading eggs and although it is just hum drum white it is the best breed for up north I have ever had. It is the type of bird that even if butchered young it is still a full breasted nice plump roaster. For egg laying in the north it can’t be beat, unlike other birds I have raised these don’t slow down when the weather gets cold or the days short. Every day like clockwork they will lay. 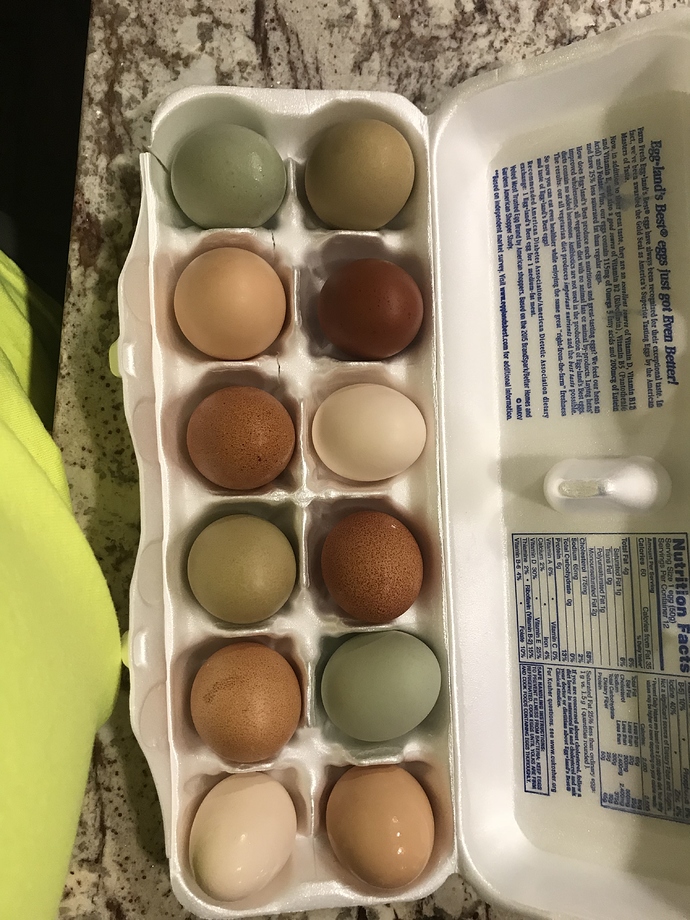 I’ve never heard of them. who sells the chicks.

https://www.bressefarms.com/ is a source for Bresse chicks.

Chantecler was selected for northern environments. They can be purchased at https://www.sandhillpreservation.com/chickens

Here is a photo of my coop,
I have trained the birds to walk up that ramp, and jump in to that upper entrance.
The ramp is a good 4 ft. Away from the coop.
The entry is made with steel sheet metal to the out side.
Completely smooth. Metal.
And bigger than a raccoon can reach.
Have had this set up for 10yrs or so.
"Never "has a raccoon or opossum , or anything else ever got in that entrance to bother my chickens.
A black snake did get in once and ate some eggs
So I do not shut the coop at night, nor do I have to open in the morning,… My birds are free range.
All I do is collect eggs.
There is a walk in door on the other side.
Best coop I ever had.
To train the birds when they were little the ramp went all the way to the entrance , I would cut a little off the ramp every few days, now they jump that last 4ft. 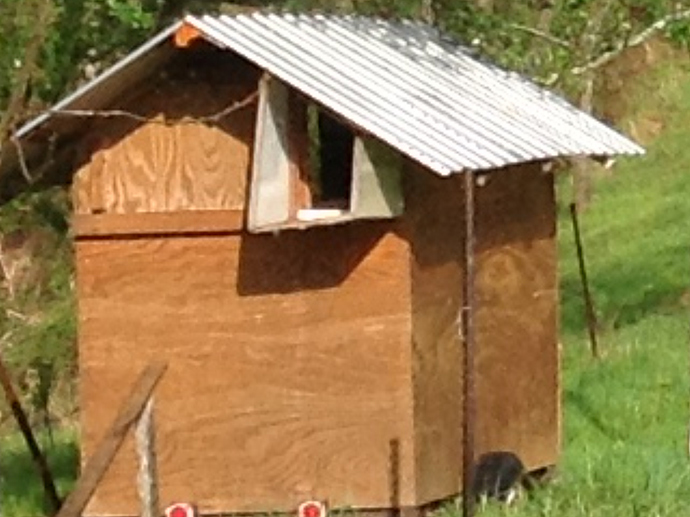 They seem hard to find in Canada and I am not sure who sells them in the US. I have done the Cornish giants for meat birds but I find them slightly stupid and slow, I also wanted a dual purpose bird. The Bresse we hatched in April started laying by the time we butchered my older stock at the end of Sept.

Now that is very cool

great design! it wouldn’t help me protect my birds here as its foxes that get them. ive seen them grab birds in broad daylight. their run is built like ft. knox for that reason.

I had some Bresse too, they were nice birds. I had the white ones but they come in blue and splash too. I got mine from Bresse Farm. They were good layers, and very calm birds - but we didn’t think the meat was what it was touted up to be.

Need advice dealing with a mean rooster.
It’s a road island red.
Often when I go out the door he will stand his ground,
And challenge me, I keep a stick by the door now.
Twice I have had to use it to the point , that I though I killed him.
I don’t want to, but… Enough is enough,
He does protect the hens very well.
But often I go out carrying something, and I have to fight that roster !
If we cannot come to a understanding soon ,…
He’s looking like soup !
Any advice is welcome, short of, and including recipes😊

can’t the raccoon get in by climbing up the ramp?

Roosters are a dime a dozen. IMHO a mean one belongs in the pot! Roast him, pick off the meat, simmer the bones in a crock pot with salt, a sliced onion, sliced carrot and stalk of celery with leaves, strain and you have a couple quarts of broth. Add a diced carrot and the cooked meat, simmer until the carrots are done and add a half bag of Kluski noodles. Salt and pepper to taste. Rooster soup!!!

I would say a smart raccoon could jump the 4ft . distance.
None have.
There are scratch marks on the out side wall . So they have tried to climb in , but could not

I’ve dealt with mean roosters by kicking them across the yard at the first attempt to fight me. Keep in mind that chickens live in a very rigid hierarchy where “position” is critically important to daily life. We can speculate that the rooster views you as an unknown in his hierarchy and is attacking to determine who is the boss. Once he is convinced that he is NOT the boss, he will generally leave you alone.

I will illustrate this with a story from 25 years ago when my son was 7 years old. He was playing outside when the rooster I had at the time attacked and flogged him rather badly. He came to the door crying. I took him straight back out where the rooster promptly attempted to attack him again. I drop kicked the rooster across the yard leaving him stunned. Then I had my son go and kick him 4 more times until the rooster finally got up and ran away. From that point on, the rooster respected my son. This might have had something to do with my son deliberately running at the rooster and kicking at him from time to time to reinforce the lesson. He did not have to actually kick the rooster, just show dominance.

My suggestion is the next 4 or 5 times you go out the door, deliberately run at the rooster and whack him a couple of times until he gets used to the idea that he should stay far away from you. So long as you only whack him when he attacks you, he will continue to challenge because you have not established dominance.

Interesting , I will try that…
But,…
If you don’t hear from me after several days…
You will know who is dominate…
…thanks …( ?)

In regard to the rooster, he belongs in the freezer. Get another one, and if you get a good one ride him until you he dies. I am not totally understanding your coop. Is there a ramp (with the chickens hopping up the ramp, but it is not shown in the pic), or do they simply fly up the 4 ft at dusk. Also, it is a set up that does not protect against horned owls.