@glib
Yes, the ramp is shown in the photo,
It is shown in lower left of photo, pointing toward that upper entrance. Just a 1"x4" board, held up by a small stake.
It is 4ft away from the coop.
They walk up that ramp to the end , and jump/ fly to the entrance .

i agree. i had to do this to several roosters and a male goose. geese do bite hard!

Randy …( the mean rooster ) update…
Well I took @Fusion_power 's advice.
Chasing him with a bamboo stick ,…
Every chance I got…
I think I was defiantly getting the upper hand…
He was more or less on the run
Seamed to be working.
He would still occasionally stand his ground.
At which point I would wac him with the bamboo,
Sadly, I found him dead yesterday …
Thinking …I just scarred him to death…!
May have been one to many “wac’s” ? !
Anyhow, problem solved…
I did sleep in this morning…
Seamed earily quiet …when I awoke…

I doubt you killed him, I’ve smaked them with 5 gallon buckets half full of grain and it never slowed them down. I’m never an advocate for being mean to animals but roosters are a different story. If you don’t get your bluff in they can inflict some serious damage. I finally just got to where I would kill any of them that became aggressive.

some of them don’t get it no matter what is done to them.

Turning this discussion into fruit growing, how have you prepared your chicken manure for orchard mulch?

I don’t use fresh chicken manure, but I’m now using some that overwintered and mixed with straw as a top mulch – being careful to keep it a foot away from the tree trunks.

i use it fresh as a mulch but i applied it over last years mulch and kept it away from the trunks. no issues. I’ve done this with other fresh manures also in the past. just composts on the surface.

i thought my brown leghorns were welsummers until their combs started flooping over. their colors are similar. got 4 more sex link chicks and 4 R.I.R to add to my flock. got to get rid of 2 roosters. they’re making the girls a little ragged.

I hatched out some chickens for the grandkids. My grandson wants all roosters because he wants to hear them crow. I haven’t explained the economics of raising chickens to him yet , lol. 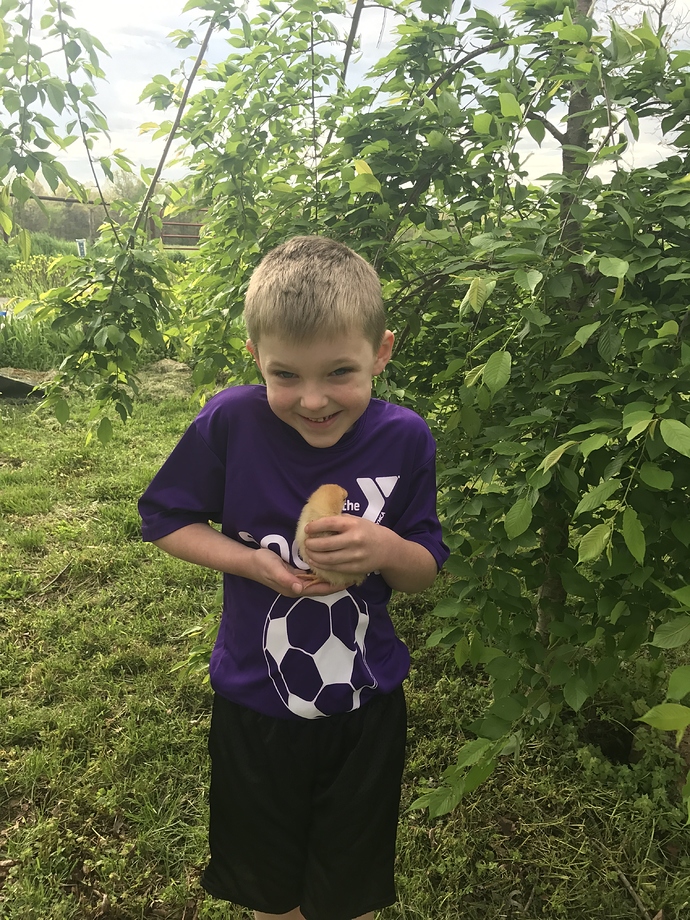 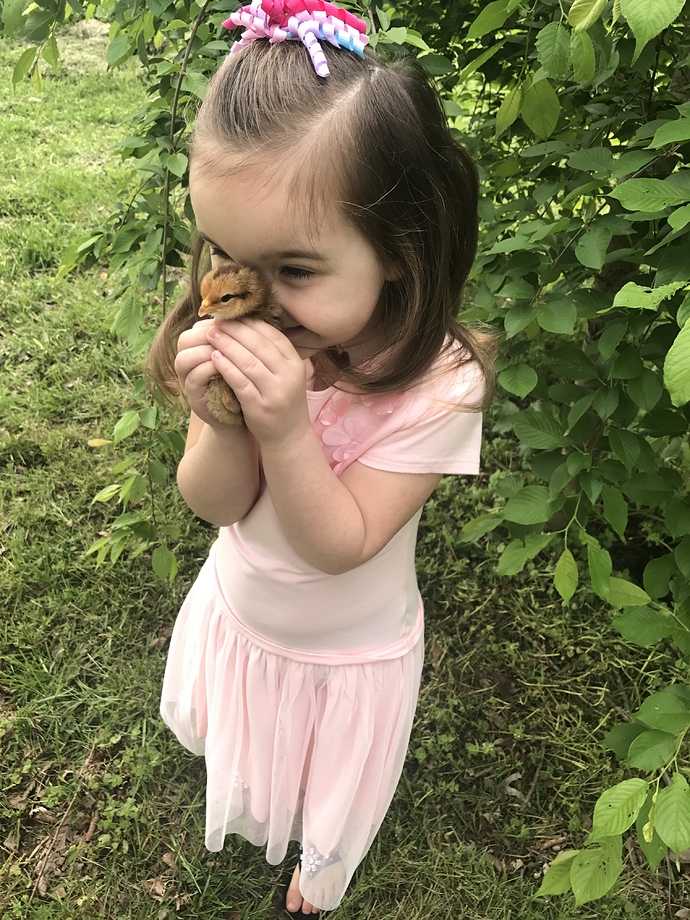 the kids in the neighborhood always ask if i got anymore chicks yet. got 8 more in the nursery coop I’ve been showing to them. kids and chicks go hand in hand.

I decided to get back into raising some chickens. So far we’ve got 6 ISA browns (the workhorses), a white leghorn, a cinnamon queen, an Easter egger, a blue orpington, a gold laced wyandotte, and a naked neck.

Chickens are just so much fun!!! And at least the way I do it, they are the easiest animal on earth to have. Mine are 100% free range. That means they just wonder around my 7.5 acres (and occasionally my neighbors) and eat bugs, which is also a benefit. Therefore, I don’t have to give them food for more than half the year- though I do throw all my table scraps out in the yard and they appreciate it. I love that too. I do loose some to hawks but just consider it the price I pay for free ranging. I now have only Jersey Giants, and once they get grown they are so large that I rarely loose one to a hawk.

This year I have 2 that have been doing something really fun for me. My front porch is one of those that are just inset on the front of the house- concrete, covered by the house roof, has a porch swing, etc. There is a banister across the front and the sides, and 2 of my girls have taken to roosting on that banister. I’ve really enjoyed that. In the evenings I can go out and pet them (they are more tame than a lot of my free rangers which won’t let me touch them) and watch them and so on. The only downside is they leave a pile of pop every night but its off to the side and I keep a broom nearby and just sweep it off every day or two.

These are my first full blooded Jersey Giants. While I love their large size, I must say their eggs do not correspond to their large body size, which surprises me. I’ve had lots of mixed breed chickens that were quite a bit smaller bodied but laid larger eggs. Still, its fun to have these very large chickens running around my property.

Do you have trouble with your free range chickens laying eggs all over the place? I’ve kicked around the idea of free ranging some Jersey Giants in my goat pasture, but we have so many hawks and owls (soooooo many owls) that I wasn’t sure if it would be worth the hassle.

It’s a great question, Andrew. The answer about the egg laying is no, not really. I have a small shed (30x by 24 ft) and its where most of my free range chickens go to roost at night. I put nesting boxes in there and 80% of my free range chickens actually go in that shed and lay in those boxes! SO it works great. The other 20% do sort of lay “all over the place” but its always easy to find their nests- they almost always pick a place that has some kind of cover over them. I’ve had them lay in a pile of old lumber that had some hollow spaces, and in some brush piles they could get into some hollow areas within it. Right now I have a hen who is sitting on a nest of eggs that she laid under an old car that hasn’t been moved in a couple years. I’ve also had a nest in my large barn over in a corner. Honestly, Its fun to me finding them, and its never hard. And again, the vast majority go into their little roosting house and lay in the plastic milk cartons with straw that I put up for them.

So the egg thing is no problem. However, I may have understated my hawk problem. As I said, I just accept the hawk kills as part of the “cost” of free ranging, but it is a big “cost”. To put it in perspective, last spring I started with about 25 chickens and by late fall I was down to about 8. And I think it was all hawks- not coyotes or owls. Strangely, owls here almost always go for ducks and geese over chickens. Now, that is acceptable to me since I don’t need but about 4 chickens and really love not having to feed or water. (they drink from a pond at one end of the property and a tub of water I leave out at other end). I also just hatch eggs my own chickens lay, so there is no cost to my loss. But for a lot of people and maybe you, the loss of so many chickens might be unacceptable.

Wanted to show this egg my chickens laid yesterday.

That’s an impressive egg! Has anyone actually tried incubating a suspected double-yolker? Can they even be viable for hatching?

I had a flock of poultry at my grandparents when I was in middle school. Mostly chickens, guineafowl, a silver pheasant and some quail. The quail gave me the best eggs I’ve ever tasted, much creamier than the chicken eggs in a scramble. For chickens, I had a mixed flock: Jersey Giants, Cochins, Sebrights, Turkens, Silver Phoenix, and my favorites, Pekins, among other breeds.

Spending my time with the chickens was one of the best stress relievers I had back in those days. Most of them free-ranged at some point, but the pheasant and the quail had to stay caged.

I’d like to get back into poultry some day. I’d have separate flocks for Pekins and Black Sumatras. Also Quail: Japanese, Bobwhites and Gambel’s.

I’d also like to try my hand at introgressing the common pheasant into a flock of chickens. My interest in hybrid breeding goes back a long time. As far as I’m aware, Chicken X Common Pheasant = Partial Sterility (I don’t remember if it’s the male or female hybrids that stay fertile). I would backcross them to chickens repeatedly until I get decent fertility in both sexes, then breed them among themselves. Aesthetically, the goal would be a chicken with some pheasant features. Practically, I might get a bird that tastes like pheasant but would be easier to keep. For the aesthetic goal, I’d cross Melanistic Mutant with Black Sumatra.

Note: Do not crossbreed gamebirds lightly. Many, especially among pheasants, are rare species, even endangered. And some domestic populations have almost been lost to reckless crossbreeding (it’s almost impossible to find pureblood Golden or Amhearst pheasants because they’ve been crossbred so much). I consider my idea fair game because: 1. I’m breeding pheasants into chickens, not the other way around, 2. Chickens and Ringnecks are both very common species. Proceed with caution, and make sure your efforts don’t sabotage conservation.

my barnevelders and R.I.R will throw a occasional double yoker but that is a esp. large one! nice bright yolks on them.