Does this apple tree need water?

I took this picture this morning of my Honeycrisp apple tree. All of the leaves are curled like this. None of my other trees leaves look like this. Could it need water? It’s been hot and dry here for the last 5 days or so with high’s 85-90 degrees. Since my soil is pretty heavy I’m afraid to water it too much. 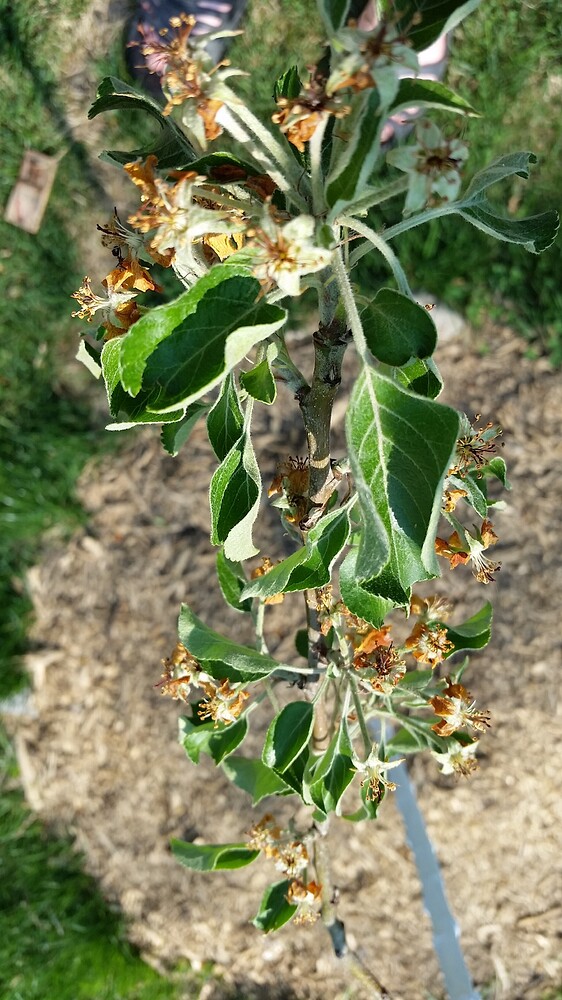 It looks like heat stress. All apples can look like that in the hottest parts of summer. I would give it some water, especially if its a relatively new planting without deep roots.

Thanks scott. I’ll put some water on it asap.

An update on my tree. The condition appears to be getting worse. It’s been cool the last couple of days and the leaves are curling more and some are turning yellow. I checked the soil with a moisture meter and it was just at the high end of normal. my other apple tree looks fine.

I’m starting to get a bit worried. Is there anything I can do. 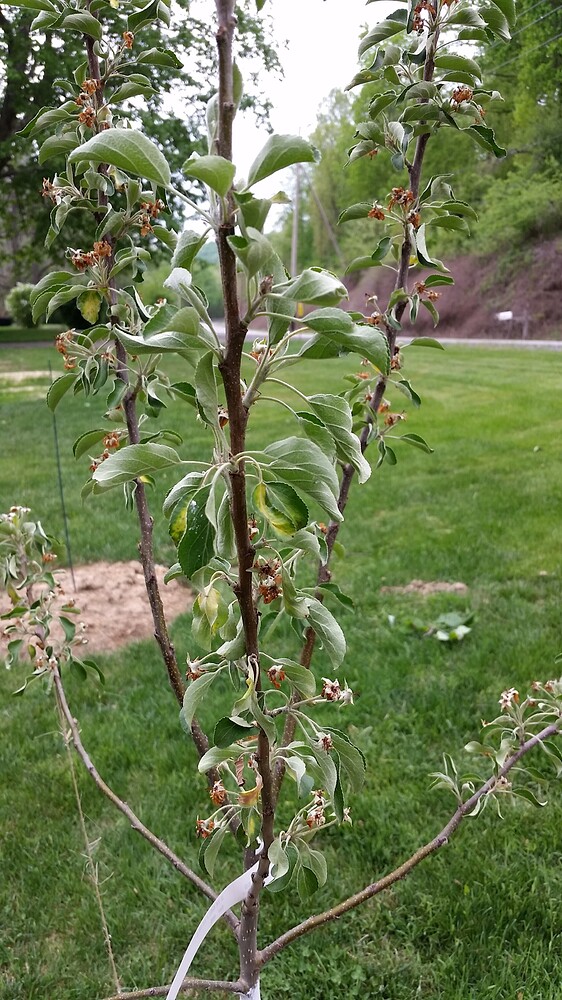 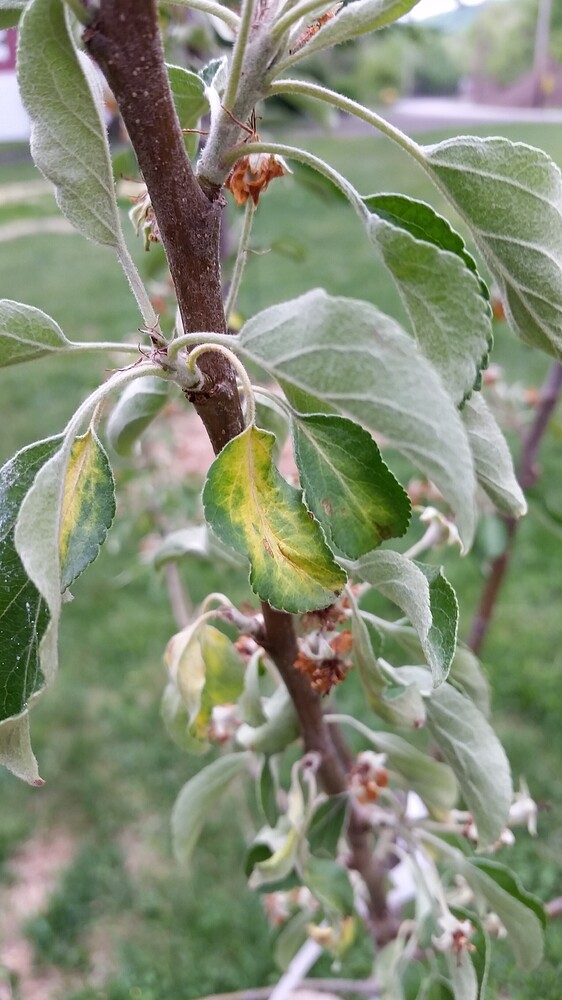 This is the first year I grew apple seedlings. I had them outside to harden for a few weeks before the weekend heatwave that hit low 90’s here. By the end of the first hot day they didn’t look so good.

Now half of their leaves are crispy brown from being scorched.

They had plenty of water, so it had to be they weren’t ready for that much heat. I had no idea that apples could be so delicate.

wierd. The odd part for me is that they’ve been in the ground for nearly 2 months now. The tree in question was the most robust best looking tree I had. It was the first to leaf out and was full of blossoms. My other apple did not blossom so there were no pollinators so I left the blossoms on. It got the same amount of sun and was planted in the same soil and same methodology.

Could be a root issue and/or soil too wet. It’s almost certainly a root issue. Just a matter of what’s going on. I don’t trust those meters. Better to tell by feel.

What are my options then? Can I remove the mulch and dig down around the roots to investigate? Could ground moles cause issues? Although I have not seen moles near this particular tree they are tearing up my yard pretty bad in the vacinity of the trees.

I don’t have experience with moles but pocket gophers are like death rays for tree roots. Yes dig down gently and see what things look like.

If it’s voles (eats roots, herbivorous), it can eat all the roots of a young plant. You can practically lift the tree off the ground and nothing much left underneath. I saw several of my friend’s roses got wiped out that way.

Moles is carnivorous. They eat grubs. You could have both. I don’t care for either.

Hope you find out what cause your tree to suffer.

Whatever it is, its not good. I had three apple trees wake up and grow some this spring, but then wilt and fade. Something happened to the roots. Two of mine were virus infections I expect, they were G16 stocks which are very sensitive to viruses. Make that three - I didn’t look up the third until now and its also on G16. I expect there is nothing you can do for your tree, and it will probably not make it unfortunately.

I’m fairly certain it’s not voles. I never see them this time of year. I’ve only ever seen them during winter time and snow. Moles on the other hand have been a significant problem. I’ve killed 5 so far this spring with peanut butter filled mousetraps under 5 gallon buckets. 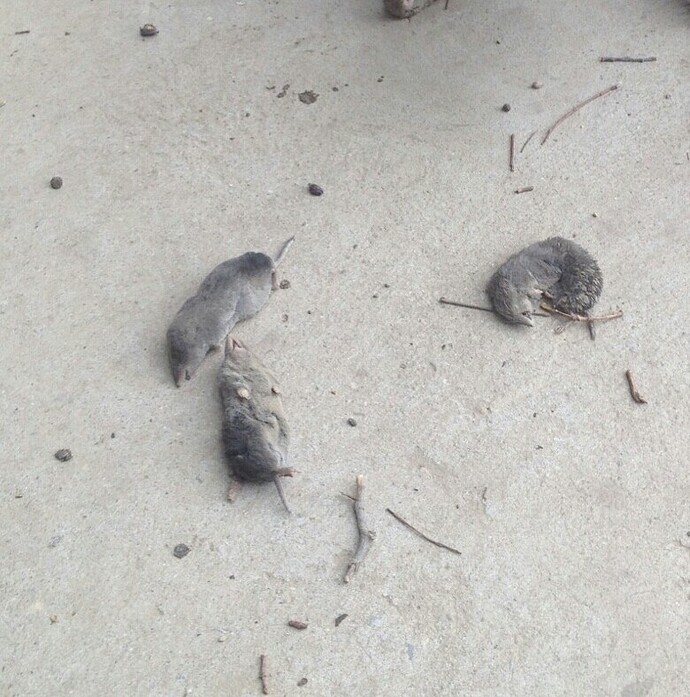 I hate to hear that this tree could be lost. I’m going to try to get a look at the roots tomorrow.

Speedster, voles don’t just melt away with the snow. If they were alive in the winter, I think the chances are strong that they and their offspring are still in the area.

Where did you purchase your tree? Is it one of the bareroot ones that you snapped pics of the rootstocks? If it is, then if you eventually wind up digging it out, maybe you could see whether they developed and then declined, rotted, were eaten, or if they maybe never had enough to support the above ground portion. I know it won’t help the current problem, but most places do have a guarantee, and will probably ship you a replacement in the fall or next spring.

This part of my reply isn’t really aimed at you. It’s just a general thing perplexing me. - What’s with so many people having newly planted trees flowering? The very earliest I’ve ever had an apple flower, even lightly, has been the third year I’ve had them in the ground. Most often my trees tend to be like me - late bloomers.

I’m know that voles don’t just disappear during spring summer. It’s just that I’ve never had issues with them nor have I ever killed one. They seem to prefer being off in the woods.

This particular tree was the one potted tree that I purchased from a big box store. It was not bare root. It had plenty of blooms but since I didn’t have a pollinator nearby I just let it bloom. Was this a mistake?

Even if it was a “mistake” to let that tree bloom, I doubt that is what is sending down hill so drastically. I know this won’t be much consolation to you, but I also bought only one fruit tree from a BB store this year, and that is the only one that has never been happy so far. It started off with a major case of being spiraling, bound roots. I probably should have lopped off most of them and most of the top, as well. (But now I understand why your tree bloomed.)

If it doesn’t make it, drag crispy remains back to the store and get a refund. They’ll have Honey Crisp again next year. I know how disappointing it is to have a tree doing well and suddenly take a nose dive for no clear reason.

Was the tree root bound? Is the problem occurred because water could not penetrate/distribute adequately?

Muddy - “The very earliest I’ve ever had an apple flower, even lightly, has been the third year I’ve had them in the ground. Most often my trees tend to be like me - late bloomers.” Same here, both trees and the person

Potted up trees do flower sooner. I see them flowering at the big box stores. I suspect they flower because they are just older.

Know that too much water looks the same as not enough. Most of the time when I’ve lost trees this time of year, it’s because they had too much water. Keep in mind this is coming from a perspective of losing lots of trees to drowning. I have lost some new apple trees from lack of water, but they didn’t die till much later i n the season. The soil was super dry.

Perhaps it’s a virus as Scott suggests. I don’t have any experience with that type of tree mortality.

I know Honeycrisp is susc. to “Honeycrisp yellows”. I wonder if it’s possible you are seeing the early stages of the disease?

What has the tree or the lawn been fed so far this year? By any chance was “weed and feed” applied to the lawn?

The trees have not been fed anything. I put some milorganite on my lawn but didn’t even get within 20 feet of the trees with a broadcast spreader.

The tree was not root bound. When I planted it I shook the tree and knocked off the loose potting mix. I did not remove it all, just what easily fell off… Could that matter?

I wondered about the lawn chemicals too speedster because your lawn looks free of weeds.

I don’t think you done anything wrong, it’s just one of those unfortunate things. I wouldn’t totally give up on it either, although it doesn’t look very good.