I ran some black tubing for a drip irrigation system to water all my potted and in ground trees but since the hose is on top the ground the water that sits in the tubing from the last watering gets boiling hot which I’ve just been flushing through the end of the line every time I’ve watered but I would like to hook up a electronic watering gauge so I wouldn’t be able to flush the hot water out if i’m not there. Would the initial hot water hurt the roots any until cool water evently comes out? I have about 100 gallons an hour going out to all the plants and pots

I woudlnt worry about it but you could always paint it white I suppose, or cover with wood chips…

Are you watering more than once a day? If not set the timer to water first thing in the morning (which is when you should water anyhow) the water in the tubes wont be any hotter than the air temp at that point. I have sometimes wondered the same thing in regards to water temp but it is probably no big deal. Probably a bigger deal to dump 55 degree water on a plant when it is a 100 degrees out, which is the temp of our water coming out of the lines in the summer.

I’m setting up similar irrigation for my container plants and plan to use the approach TurkeyCreekTrees suggests, partially out of concern for the heated water, but mostly because it seems like it is the best time to water. I’ll basically set it up to end the watering around 6am so that when I go out in the morning I can quickly see if it is still wet which would mean the cycle ran and I can also see if for some reason it is still running. It seems from the reviews of most timers that when they fail they are most likely to fail in the open position so if I see it still running in the morning (or ask a neighbor to take a look if I won’t be around) hopefully I’ll catch it before a major flooding.

The morning run means I or a neighbor can see if it didn’t run as well, so I can avoid having the plants go through a 95 degree day without water. I know one fig collector that lost half their collection when they were away for a weekend when their system failed to run.

I might also run a second shorter cycle after sundown when the water has cooled off if it seems like they are really drying out during the day.

I planned on a timer going off around 11 and then 4 for an half an hour each and see how that does, the soil in the containers are heating up around noon so I’m trying to cool the temps down. I have a 2 zone timer so I might re due it so that 1 zone goes to the planted trees and 1 zone goes to the pots so I can water at different rates.

I just lost a water hose today, had water pressure in the green water hose and the sun heated it up and it busted, so I’m running the hard black plastic tubing all the way to the water faucet and I will turn it off every night since I walk around the trees anyway.

I painted the pots white, it seems to have drop the soil temps about 2 degrees. 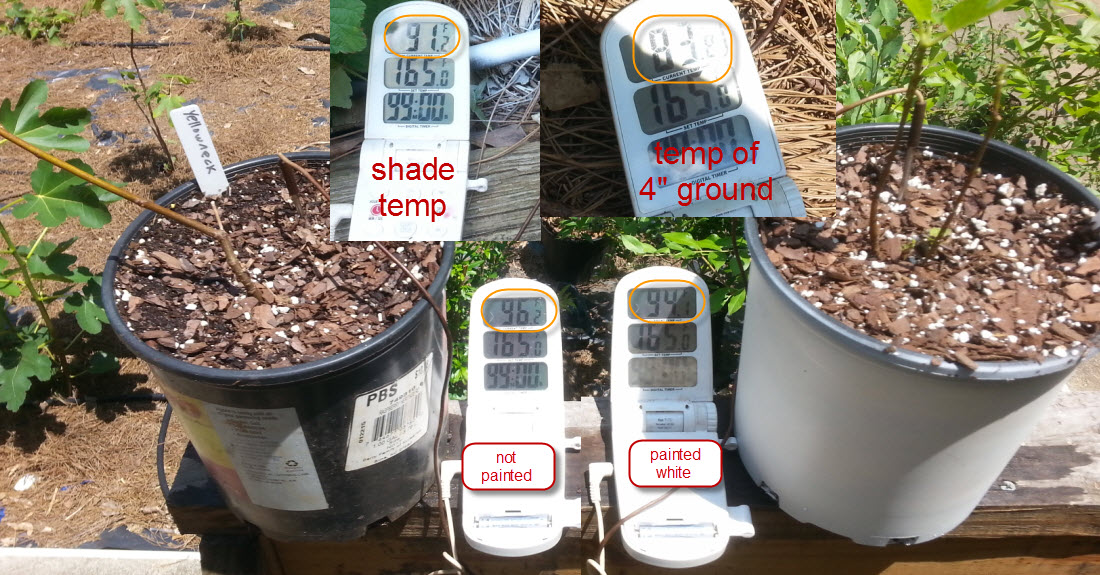 I’m going to re-figure my drip irrigation zone 1 to water the pots 3 times during the day 2 hours apart maybe 5 minutes each time and see how that does to cool it down, I also hooked up a Miracle-Gro liquid bottle onto the drip irrigation line so I can fertilize at the same time, just flip the switch to feed. On zone 2 which waters the ground planted figs I will water once a day for an hour and use a granular fertilizer. The picture below you can see the leaves really drooping at the end of the day.

The Miracle-Gro Liquafeed Universal Feeder which I had on my drip irrigation line is just not working so I’m going to return it (it didn’t work good with low pressure and now it stop all together). Before I buy another in-line fertilizer that I’m disappointed with can anyone give any advise on a product under $50, I have a small area to feed about 100’ of line in each zone with a 25 psi regulator and backflow preventer. I’m thinking about the Add-It fertilizer Injector

We run EZ-Flo tanks on all our drip. So far so good.