Ducks in the orchard

I have read about the benefits of ducks in the orchard.
Used in China for pest control,
Duck poop fertilizer is the added bonus.
Here is a photo of my little experiment 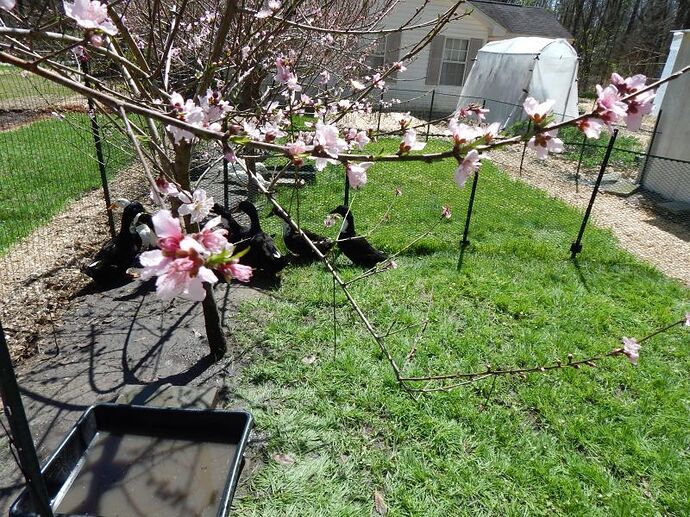 Im interested in seeing how you come out with this long term. Turf control in our 3/4 acre high density side orchard is something I am fussing alot about as we slowly plant it put. Right now im using chemical (round up) to control the turf but its tediious and very time consuming. After the trees are established im planning on letting the turf grow back and use a combonation of our own line of pot belly pigs and chickens to control the turf. Pot bellies (or at least our line of them) are very efficent grazers. They are short and cant reach up real high so anything 2 ft off the ground should be safe. Ive never had our try to root, and if ever that became a issue I would have no problem putting rings in thier noses to stop it.

But please do report back on how you do with the ducks. Id be afraid they would eventually find your fruit. But maybe not.

@amadioranch
The domestic breeds cant fly or perch so any fruit above 1.5 - 2 feet should be safe.
The problem is the ducks need a lot of water every day.
This is great in the summer because you are watering and fertilizing your trees.
In the winter you are adding water to already wet ground.

I have seen them eating bugs from the bark and at the base of the tree so that is a good sign.

I mainly have them for slug / snail control and summer grass hopper control.
Now if a biblical plague of hoppers moves in I am happy for the free duck food.

@David. I was wondering if you could update us on how your ducks worked out under your trees? I’m thinking about getting some for bug control.

I’m interested too. I have a muscovy duck and drake and their 9 two month old ducklings in my citrus orchard, and so far they do less foraging and more eating of expensive feed! Any tips on encouraging the grazing? I’ve been free feeding them since the ducklings were growing, but I think it might be time to start measuring out the feed… What do the rest of you do?

I am not sure about ducks but I had what I called weeder geese in my peony field ( I grow commercial peony roots and flowers). The geese ate only the weeds and left the plants alone. To get them to do this instead of eating the expensive feed I had to slowly increase the times between feedings till they were weaned totally onto the weeds. They did a wonderful job and it was lovely to see the tall sow thistle topple because for some reason they liked to eat it from the top down. Funny thing is that the only weed they would not eat was what we call “goose grass” LOL.
They never flew and the fence was about 3 feet high, I think they get too heavy.

To be sure my ducks were getting enough to eat, I would think to feed them all the grain (or comparable nutrient-dense feed) they would eat at the end of the day every day. By morning they should be hungry again, and should eat whatever forage ducks would eat all day long.

In my experience, ducks – I haven’t had muscovies yet, which may be a little different but I’d think mostly pretty similar – hardly bother fruit trees/bushes/vines at all. They don’t hardly jump, and I definitely haven’t ever seen them climb (jump from branch to branch) like chickens (especially young chickens) can, so they’re not going to bother anything above about 2’ high. The only thing I’ve mine I ever noticed them eating were the ripe figs they could reach.

Edible Landscaping keeps a small flock of ducks that run loose every day at their nursery.

Do ducks prefer bugs or weeds, I know geese prefer the weeds but I am not sure about ducks. They would be easier to keep than geese.

Masanobu Fukuoku grazed ducks in his citrus orchard in Japan. His book, One Straw Revolution is a must-read for anyone interested in ecological agriculture.
I have a flock of ducks, mostly Ancona, who do a great job of pest control at my place, especially slugs, but also ticks, grasshoppers, and all manner of worms, grubs and other soil dwellers that they dabble up. Great for eggs and meat, too. Plucking is much more work than chickens though. They don’t require a pond, I have a kiddie pool they swim in.
Fun to watch them forage, they are real characters.
Ducklings just hatched!

Thanks for the book title, I looked at it online and have added it to my cart.

I think ducks will be my next year project, I have the fencing. I found that geese were very hard to butcher. We raise all our own chickens for meat, duck might be a nice change. You are right about character, the geese were certainly entertaining. I looked up the Ancona duck, it is a lovely breed.

There is a free download of that book you can find online (sorry, don’t remember the site).
It also had some other classics dealing with agroforestry, sustainable ag, etc.

I’d like to hear from anyone who used ducks in their orchard, and if they had good results in the control of the insect population, to the point of significantly reducing pesticide usage.

I’d think about ducks if they could significantly control insects, and I could do less work and less spraying of toxic pesticides, but if I have to do the same amount of spraying, then I don’t really see the point of getting them unless you already wanted them.

What insects could we hope for a short, ground-dwelling animal to even theoretically be able to signficantly control? I would second what Jesse said about slugs: ducks really go after slugs. But from what little I know of PC, OFM, Japanese beetles, stinkbugs, codling moth… I don’t see the potential for a short, ground-dwelling animal to significantly control those fruit pests (or any others I know of), especially with low stocking densities or situations where the population of ducks wouldn’t completely overwhelm any available forage (including fruit pests), thereby rendering the forage of negligible value to the ducks. VSOP, I think the short answer to you question is that ducks aren’t going to satisfy your criteria. That’s not to say that ducks can’t make a lot of economic sense, but for ducks to make economic sense I think you’d have to place significant value on the duck meat (and eggs, etc.) and I think you’d also probably have to place more weight on the opposing cost of pesticides (externalized costs, unproven risks, etc.)

Ducks do love (much more than chickens, for example) things like Japanese beetles, June bugs… but unless you’re considering things like daily shaking your trees early in the morning (and possibly confining your ducks directly beneath particular trees) when such pests are a lot more likely to fall to the ground instead of just flying away, it’s hard for me to see ducks making much of a difference.

I want to add: as someone that has kept ducks, I’m inclined to think the benefit of orchard pests and other incidental orchard forage to ducks probably outweighs the benefit of ducks to the orchard, although there are certainly some benefits in both directions.

I have a flock of Muscovys and highly recommend them. Any potential benefit of insect control is totally undermined by being unable to spray the trees where they congregate. On the other hand, they are entertaining, productive and delicious!

We don’t have any pest pressure on the fruit trees etc. so my interest in ducks is purely for the weeding aspect. I can’t find much information on what weeds ducks eat so it will be trial and error next spring.

I looked up the Ancona duck, a very pretty bird.

I’ve had ducks and geese for eggs most of my life. they don’t eat your fruit and leaves like chickens, scratch up your mulch and a lot more hardy as well. they eat mainly grass, bugs and grubs. they will eat broadleaf weeds if you feed it to them when they’re young. there is a hybrid 300 breed that lays more eggs than a leghorn chicken and gets good size for meat too. metzger farms has them. great foragers too boot! getting a doz. next spring. have khaki cambells which lay well but are very nervous. the hybrid 300 supposed to have a calm demeanor. i also raise mealworms to feed them as a supplement in winter. they love them! i too give them a kiddie pool when weather appropriate. they’re great to watch. comic relief!

Thank you for taking the time to answer my question. I think the reason I asked is that when the subject of ducks and orchards come up, I’ve read a lot of people who just gush about how good the ducks are for the orchards and they eat soooo many bugs. (Not necessarily here, but from a number of different places.) And I thought to myself, “Huh. I didn’t think they would be that good except for maybe the manure.” But the more and more I’ve read about ducks and orchards, and the more people gushed, the more I felt compelled to ask. Because I’ve read many of these very positive accounts, but never read an actual account that quantified to what extent they were able to “help” the orchard.

You’ve confirmed what I thought all along, which is that ducks have a benefit, but it’s more an incidental one for people who already have/already want ducks.