Hello all. I’m an apiring chestnut grower in South Carolina who is planning on planting dunstan chestnut seeds sourced from Chestnut Ridge of Pike County since dunstans are blight tolerant and were originally developed in the South, so should grow well here. Does anyone know anything about this strain of hybrids and if they are worth bothering with? What is the general nut size and quality?

Don’t plant anything until you hear from @castanea.

Dunstans seedlings are just Chinese. In theory they have an American ancestor but you will rarely see any American traits in random Dunstan seedlings. There is no evidence they have any more blight resistance than other Chinese trees. Almost all Chinese chestnuts do well in the southeast in zones 7-9. Nut quality and size on Dunstan seedlings is usually average for Chinese chestnuts. Szego grafts OK on most Chinese rootstock because Szego is very vigorous and grafts well on all kinds of stock, but in the long run Szego will probably overgrow Dunstan stock. If you want above average seedlings, your odds are better if you plant something other than Dunstans.

Thank you! Another question. Are seedling chestnuts okay for commercial production, or am I better off grafting known cultivars onto rootstock? I have seen conflicting information on this, with some sources saying that seedlings from good cultivars are fine and will produce marketable nuts reliably, wheras other sources say that grafts are necessary if you’re doing chestnuts seriously due to the inherent inconsistency of nut quality with seedlings. I’m a Horticulture student at a major land grant university, so I already know how to graft scionwood myself and it wouldn’t be an issue for me, but I plan on planting thousands of these trees within the next 5 years or so and just planting seedlings would certainly save me some time and money.

If you’re growing European trees on the west coast you want to plant grafted trees. If you’re growing Chinese trees in the east, you want to plant mostly seedling trees from high quality parents. There’s nothing wrong with planting some grafted trees to use as seed sources but in the long run seedlings tend to do better. Additionally, if you have some poor quality seedlings, just top work them with better varieties. Chinese trees graft best on trees that have been in the ground for 5 or 6 years anyway. 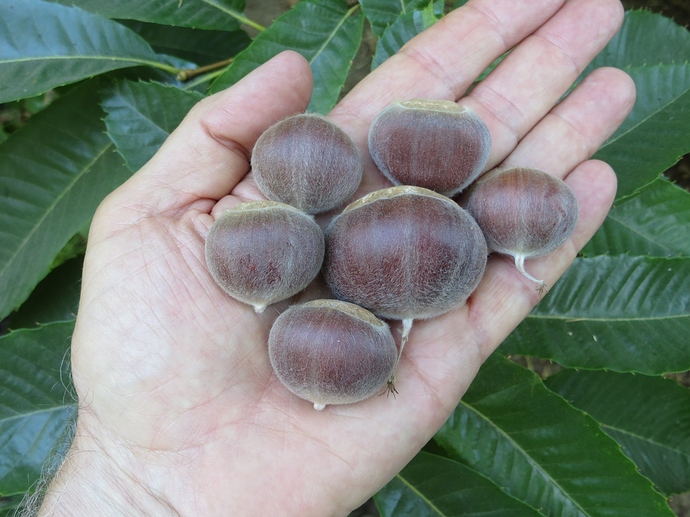 The photo below shows nuts from a Jenny seedling tree. The nuts are not as large as those on the Jenny ortet, but they are larger than the nuts on the grafted Jenny tree. 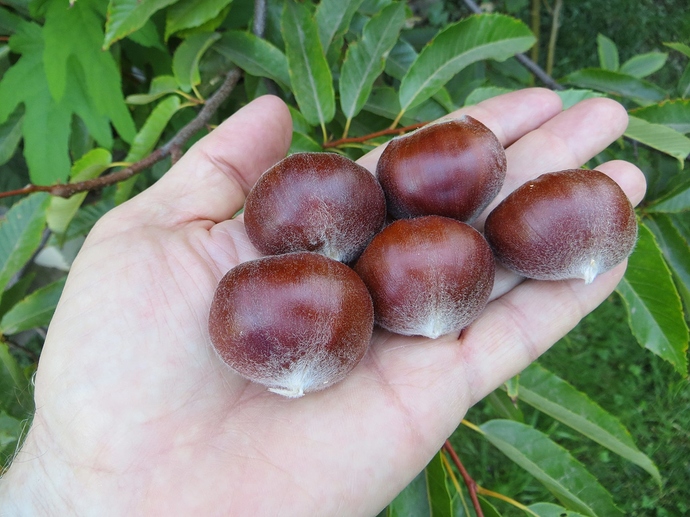 Very interesting! I’ve been thinking of planting a few chestnuts and was considering the Dunstan but after seeing this I may look for seedlings. And I have learned a new word: “ortet” - thanks @castanea!

The best Dunstan cultivar is Revival. If you can get seednuts from Revival, they may be worth planting. Otherwise, plant something else, like nuts from Jenny (above) or nuts from Ness (below): 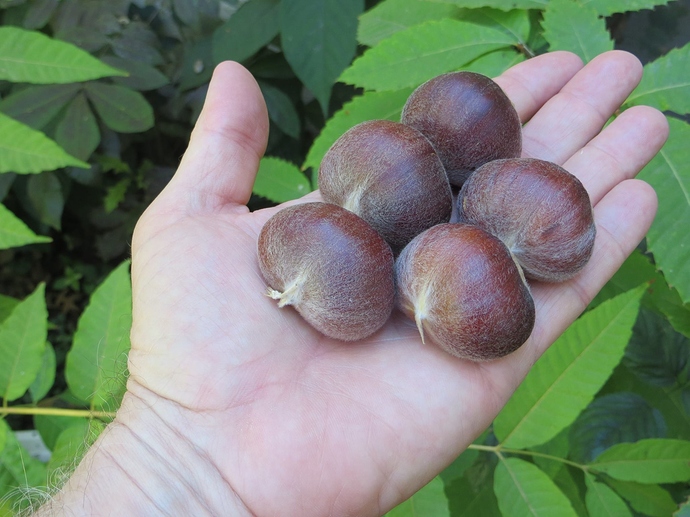 Thank you, Castanea! Looks like Chinese seedlings it is, then. I’m considering primarily planting Peach, Qing, and Kohr seedlings from Red Fern Farm. I do think that Szego will still be a prominent part of my orchard though, primarily as grafts for any seedlings that may produce inferior nuts.

Anyone have an opinion on Layeroka? You don’t see Chinese x European crosses too much, so it has captured my attention.

Are there any improved chinquapin varieties you recommend?

Szego is susceptible to blight in areas with high bight pressure so Szego seedlings with Chiense pollen parents are better in the eastern US. Same with Layeroka. Layeroka does not have a high level of bight resistance. Layeroka seedlings tend to be vigorous and productive. If they have Chinese pollen parents they may have enough blight resistance to survive in areas with high blight pressure.

Layeroka is one of the Gellatly trees, which includes Skioka, Myoka, Skookum, Manoka, Britoka, Penoka, Willoka and others. These were originally all thought to be Chinese trees and later to be Chinese/European trees, but there’s nothing about the first generation trees that suggests any Chinese heritage at all. I suspect the first generation trees are American/Japanese hybrids.

Chestnuts : ,at the NNGA meeting last year. There seem to be “two camps” among Chestnut growers.
One ,preferred seedlings. The other grafted trees.

I am not a chestnut grower , only have a few.
So not sure which is best?
What I have noticed over the years is that they don’t like to be crowded. They need a lot of room for a full canopy .
Umbrella shape. As soon as they crowd , production declines.
Many plantings I have visited ,have been planted too close. With the intentions of thinning in later years.
It seems no one has the heart to thin those trees when they start to crowd. Production declines .
So give them some room

If you are in the eastern half of the US in zones 5-7, and are growing Chinese trees, seedlings are clearly the best option.

If you are in the eastern half of the US in zones 8-9, and are growing Chinese trees, seedlings are still the better option, but grafted trees are a viable option.

If you are in the eastern half of the US and are growing European trees or hybrids in any zone, your trees will eventually die of blight or cold, so it doesn’t matter what you plant.

You will notice there are no names on this list. That is because there is no one in the US more knowledgeable about growing Chinese chestnut trees. No one.

Tom Wahl of Red Fern Farm in Iowa also prefers seedling trees and has explained why in detail in both writings and in a video. Those can be found online.

Yes .
I too …have great respect for Greg Miller, and his knowledge of chestnuts

I really don’t know why people with far less experience than Greg want to disagree with him on this issue. I think some people really do get confused by the fact that it’s better to grow grafted Europeans than seedling Europeans. But Chinese trees are very different than European trees.

I realize this is an old thread, but thought I’d bump it to see @chestnut24 could give us an update on how things are going with your chestnut project.

Also, I’m wondering if @castanea or any other chestnut growers have any thoughts on starting chestnuts from the nuts purchased from local markets. Here is a bag I got from a large Asian grocery store in our area and they are pretty large, probably about 25 nuts to the pound. Would these be viable or are they treated in some way that keeps them from germinating? And would these be likely to be good trees, given the nut size? 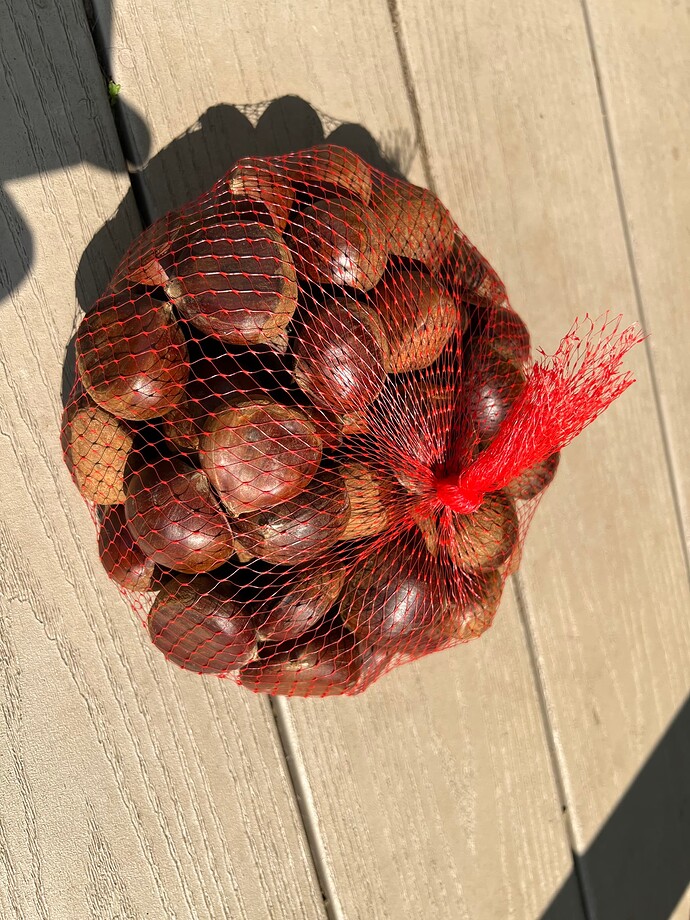 Chestnuts that have dried out rarely germinate. Usually, between 4 and 8 weeks from harvest, they will lose viability if they are air dried. Those chestnuts look dry.

This is just my opinion, but with chestnuts - like many other fruits and nuts - size is not nearly as important as flavor. I would taste some of them and see if the flavor is acceptable before planting them. Even then, you have no idea of parentage so there is no way to know if they would be adapted to your area or if they would be blight resistant.

Those large nuts are from Korea. They may or may not germinate. The seedlings they produce will have nuts that do not peel well. If you don’t live in an area that is compatible with Korean trees, they won’t grow well for you either.