Loving the mix of cooked and fresh peaches! 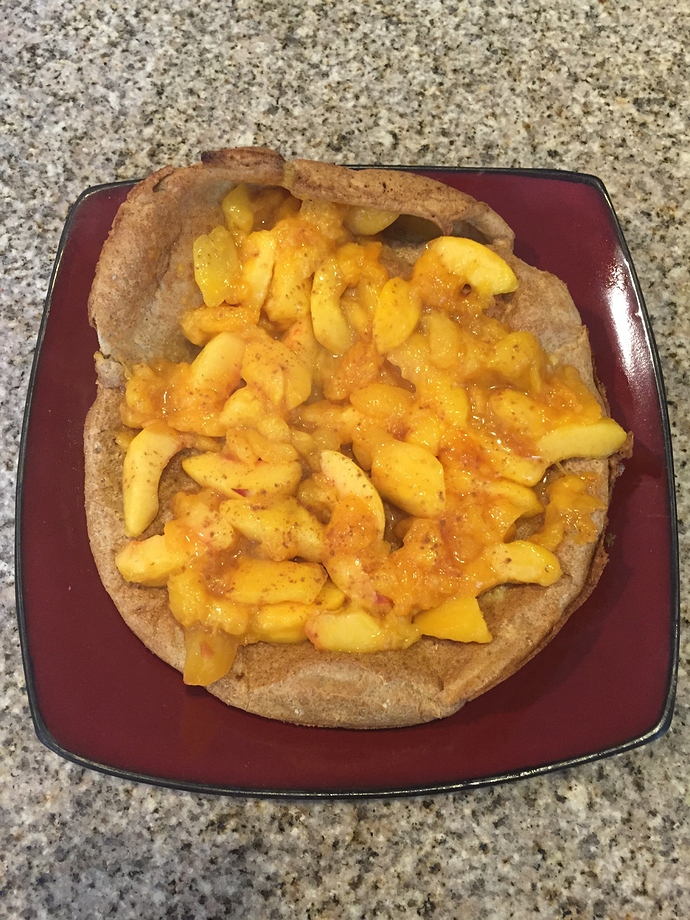 And the recipe? That is just too tantalizing to just leave us with the picture.

It’s super simple and looks more impressive than it is.
Preheat oven to 420 with cast iron skillet in oven.
Beat 4 eggs, add 1/2 cup milk (or milk alternative, coconut and almond milk both work fine), mix in 1/4 cup flour.
Remove skillet (wear oven mitt), swirl small amount butter in hot pan, add batter
Bake 25 minutes
Meanwhile…peeled and sliced peaches. Cooked half with the juice of an orange (not necessary, could use water or butter but had lots of oranges on hand)
Mixed in the other half peaches right before serving.
Topped pancake with peaches and sprinkle of cinnamon.
I hope you get to try it out, I’ve tried with apples, blueberries, guava and it adapts well!

Fruit topped Dutch babies have always been one of the first things I’ve taught my kids to cook, starting when they were around five. We used the pulse feature of a blender for beating the batter. Of course, I handled the part about putting them in and out of the oven. It’s a super impressive dish for a kid to share with the family, and fun to watch as it inflates in the oven.

4 eggs with 1 cup flower- that’s almost an omelette! I would have said frittata but I’ve never made one.

Thanks for the recipe @Lids. Had frozen peaches in the frig from the summer. There was a large amount of peach juice when the peaches defrosted so I didn’t add the orange juice. Next time I will.

Hope it was delicious! My new favorite version is lemon curd and blueberries, can’t wait for spring!

My son makes a Dutch baby nearly every morning. His recipe is similar except oven and cast iron heated to 450, 4 eggs, 1 cup flour, 1 cup milk, 20 minutes. He puts a generous amount of butter in the skillet before the batter. The whole thing inflated like a giant crispy puff ball and looks like the cover of a food magazine. He finishes with powdered sugar and a large dose of lemon juice. I never thought about peaches…I will definitely try it. Easy recipe and batter is good overnight.