Dwarf mulberry not really a dwarf?

Hello all! I planted a few Dave Wilson Everbearing Morus Nigra “dwarf” bushes at the end of May. They were little sticks and 5 months later are now 6’ tall. They are supposed to only get 6-8’ tall but I’m thinking if they have grown this fast already, I may be in trouble! I planted these for shade for my chickens but they are somewhat near a block wall. I was told by the nursery that because they were “dwarf” the roots weren’t invasive like a standard mulberry. Any experience with these? I’m in Phoenix which is a perfect climate for mulberries. Considering taking them out now and planting something else if they are going to get too big.

Here is the description from Bay Laurel:

could you post pictures of your ‘dwarf’ mulberry?
even without pics though, have almost concluded that dave wilson nursery has no clue what true morus nigras are. Either that or may just have been an inadvertent clerical/label error

I’ll try to remember to post a photo tomorrow! Yeah, def not a true MN. And honestly I don’t care about the fruit much on these since the purpose was shade but I think I may have a mammoth beast on my hands with these! I don’t mind pruning and shaping and whatever to keep small but I just get a sense that these aren’t really dwarfs and removing them now will be much easier than a year from now!

have almost concluded that dave wilson nursery has no clue what true morus nigras are.

That’s false. The real question is what root stock are they on. If it’s Morus Alba, then they will grow like crazy in the southwest.

That’s from the Bay Laurel tag?

real question is what root stock are they on. If it’s Morus Alba, then they will grow like crazy

i disagree. Moreover, practically all nigras are grafted on albas.

of course it depends on the actual size/caliper and condition of the original ‘sticks’ @sarahw planted. 3 feet growth in 5 months in phx is possible, but not probable.

4 feet growth on an originally <1 ft stick in 5 months is unheard of.

I’ll try to remember to post a photo tomorrow!

Thanks @sarahw ,
if not an inconvenience, it would help if you post close up photos of foliage and stems as well

Ok, here are a couple of photos. The leaves on these everbearing “dwarfs” should be small. Look at the size of the leaf! The trees are 1’ over my 6’ block wall already. When they were planted (I wish I had a photo), the trunks were the size of a pencil and they were about 18" tall and were in a small liner pot. I’m pretty much convinced these need to be removed. They are 3.5’ from the wall which I figured wouldn’t be an issue if they were small. 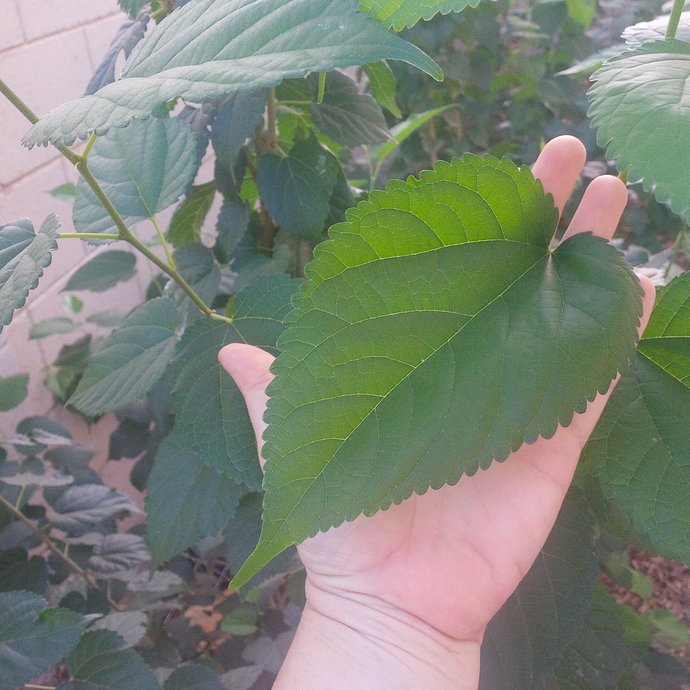 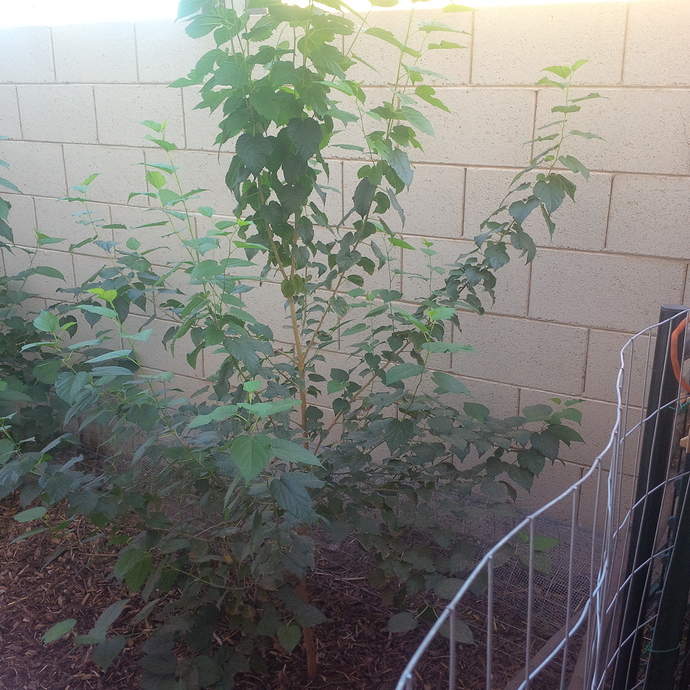 I planted a few Dave Wilson Everbearing Morus Nigra “dwarf” bushes at the end of May.

Dave Wilson does not have a plant by that name in their Mulberry catalog.

The Bay Laurel mulberry offerings do not mention Dave Wilson. Further, they erroneously claim that Morus nigra is hardy to zones 4 and 5.

Here’s the tag tat came with the tree… 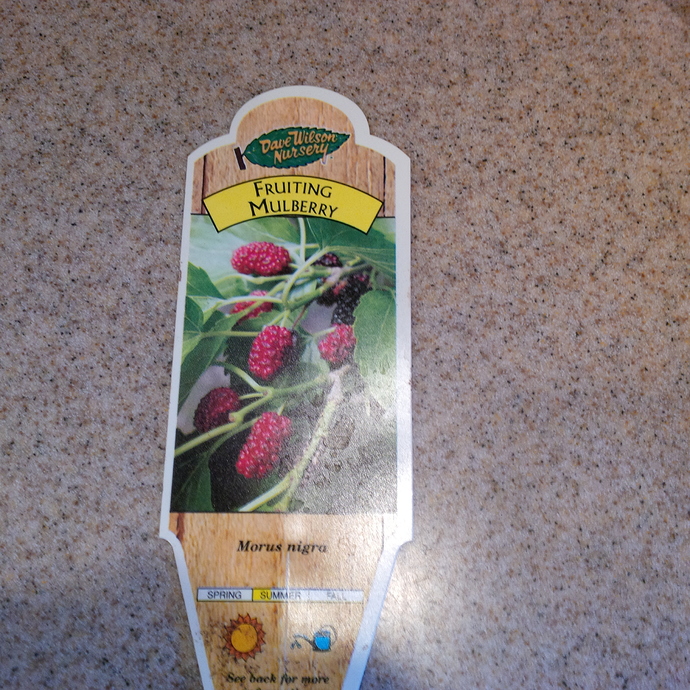 That tag corresponds to this tree in the DWN Catalog:

Also on the tag, notice that the bearing season is marked (in yellow) beginning of summer, not everbearing.

Okay, thanks Richard. Still wondering about these being true Nigras as I have a Noir de Spain and it is growing SLOW! I had thought they were slower growing but maybe it is on Alba root stock as you said.

I have a Noir de Spain

Is your Noir de Spain from Burnt Ranch? I believe those are on their own roots … but you could check

Also, the branch tissue and undersides of the leaves on your Bay Laurel “plant”, do they match?

sorry @sarahw but the photos show enough details to conclude it is not a nigra. Not sure if @Richard is affiliated with dave wilson, but dave wilson’s tag is enough proof they have no idea what true nigra’s are— or what a nigra looks like(the picture on the tag depicting the purported nigra is an impostor)

… that Bay Laurel is misrepresenting the plant. Their description

is not a match to the Dave Wilson description

yeah, and they are batman and robin aren’t they?
http://www.davewilson.com/node/1864

I got suckered by Bay Laurel as well.

Anyone know where I could buy the real deal? One that stays as small as possible.

I have a Noir de Spain and it is growing SLOW!

they do grow slow in our respective climates. Nigras will grow faster in OR and WA or northern ca, but only if calipers are ~1" or more. A 0.5 cm caliper nigra can’t possibly undergo a 5 ft growth spurt in phx, and not even in or and wa, or no. ca.
and even most ‘big and old nigras’ you see being sold at nurseries are actually grafted high on albas, just to make them look big and seasoned.
below are a couple of nigras we bought from star nursery(do you have star nursery in phx)?
was peeved the nursery trimmed these just so they could cram more trees in tight spaces, but figured still worth it since the calipers above graft are quite thick 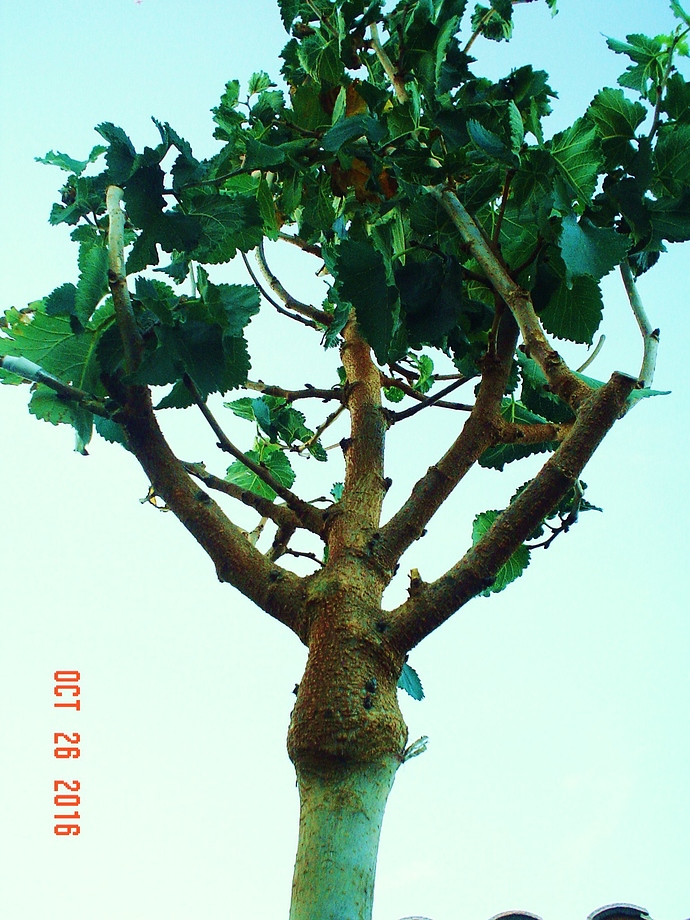 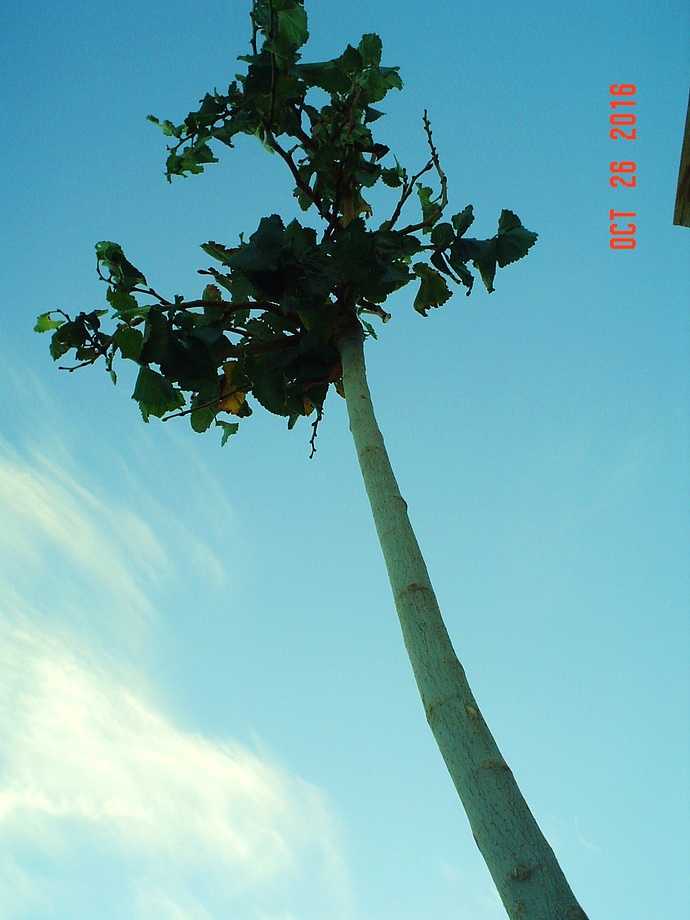 and below is a nigra re-tagged as a paki, which is not really a bad deal, except that the buyer will later realize that it grows so slow. And that berries are delicious, but not >3 inches long… 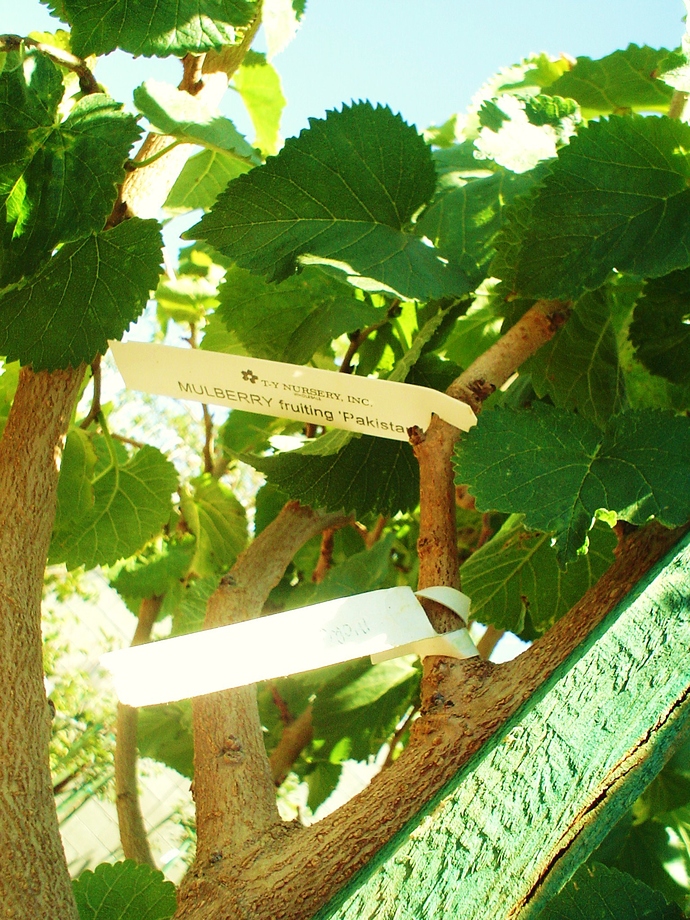 whitmanfarms.com is probably the only reliable source. Only problem is that the website does not allow online purchases, so you have to call and give them your credit card number details, or send a check.

am sure burntridge has the real deals too, until lately, when they too-- seem befuddled with the ‘everbearing black beauty morus nigra’.

yeah, and they are batman and robin aren’t they?

No. In my opinion, it is Bay Laurel that is putting the spin on an otherwise valid DWN product.

Anyone know where I could buy the real deal?

Sure! Get ahold of an M. nigra grafted on M. alba and then root cuttings of the fruit wood. Or contact Burnt Ranch Nursery and see if that is what they’re doing with their Noir de Spain.

I have a Black Beauty from Peaceful Valley/Grow Organic,that is definitely a Nigra. Brady 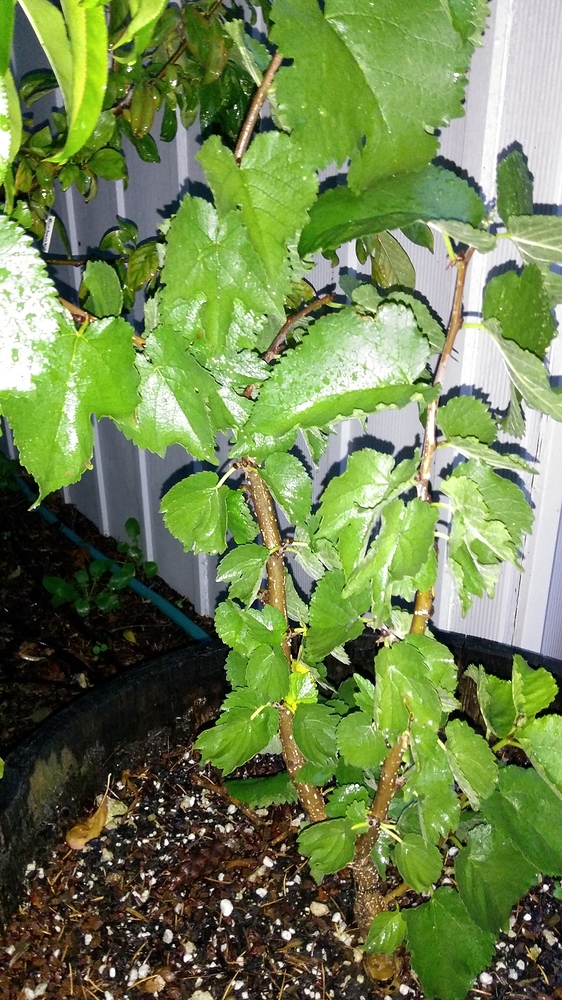