Looking to put in an early season apple. Earlier the better, but also looking to eat it straight from the tree as well. Can anyone list the best early varieties that are not all sour?

State Fair. U of Minn. 1979, very attractive, tasty, juicy, a little on the sharp side but sweet enough. Really good flavor. Texture is more open than I prefer, skin is tender, keeps a few weeks if carefully stored.

Picked a couple of State Fair apples today. They’re pretty good but need at least a week on the tree still. A very bright flavor, tasty but not fully developed. I expect some of the sharpness to recede into the background a bit as they finish ripening. They got decent size and have colored up beautifully. I think it would take a little more heat in the weather to bring out their best flavor. [DSC_0075]

Scott, what do you think of the texture? Mine this year aren’t nearly as dense as I like, but they’re my earliest apple and that counts for a lot.

Lowland Raspberry, July Sweet, Williams Favorite, Kinnairds Choice……….one of those might work for you.

Williams’ Pride, Pitmaston Pineapple, Lamb Abbey Pearmain, and Strawberry Parfait are the early not-just-tart standouts from my orchard. Gravenstein is also excellent, but slightly later here and a bit tart until fully ripe (when the texture begins to suffer).

What about the jerusalem apples. Anna, Dorsett, and Ein? Aren’t they supposed to be early and sweet?

When does pristine and zestar ripen? Are they sweet?

Discovery is my favorite early apple. More sweet than tart with a strawberry aroma.

Forgot about Pristine! That’s a good one here, too.

@jerry Pitmaston Pineapple is not an early apple. It should ripen after Gravenstein.

Pitmaston Pineapple is not an early apple. It should ripen after Gravenstein.

Not in my climate (coastal Northern California). I’m down to my last couple of Pitmastons now (and they were very good this season), whereas my Gravs won’t be properly ripe for about another week. Your orchard may vary, of course.

Indeed, our climates are very different. I’m in SE Europe and I’m already done with Gravenstein and Pitmaston is not ripe yet.

To OP: Red June (aka Carolina Red June) is worth to consider.

Carolina Red June?? (I understood that he wanted a SWEET apple.)

The one I have is sweet-tart and definitely more sweet than tart. I’m pretty sure what I have is Red June: 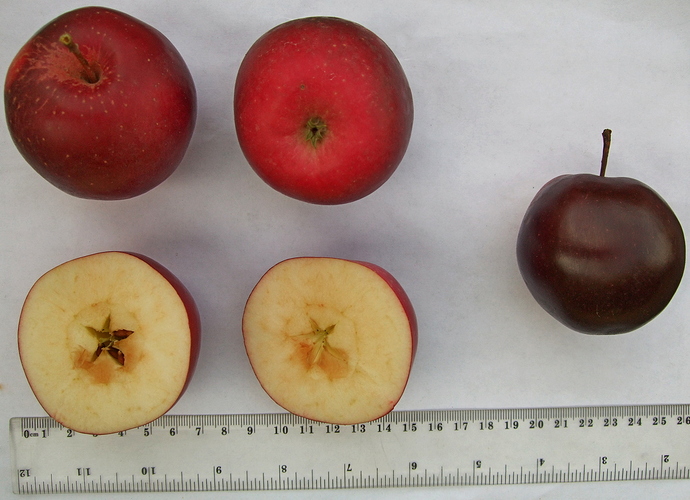 The nearly black one is overripe. Many apples have some red flesh too.

(Guess I’ve never had one within that ‘window’). Always sour to my taste.

MonArk is the best early apple I’ve grown - ripe here near the KY/TN border in early to mid-July.
Good for fresh eating, cooking, drying… and unlike most early apples, will keep 6-8 wks in the fridge without going mealy.

There is summer rambo for sale up the street. Does anyone know anything about them? How early-sweet?

Seems the earlier the more sour. Think early august is best I can do for keeping and sweetness. In the easier to find category I was looking at Zestar, Pristine, Summer Rambo and maybe Lodi. Any experience with them?