Cuttings of black currant Consort (thanks Bob) were put in sand/potting soil mix 17 days ago and kept at temperature in mid to upper 50s in an unheated room. Notice the roots developing at the top of the cutting! I’ll cut that top off in a few days and pot it up for now. 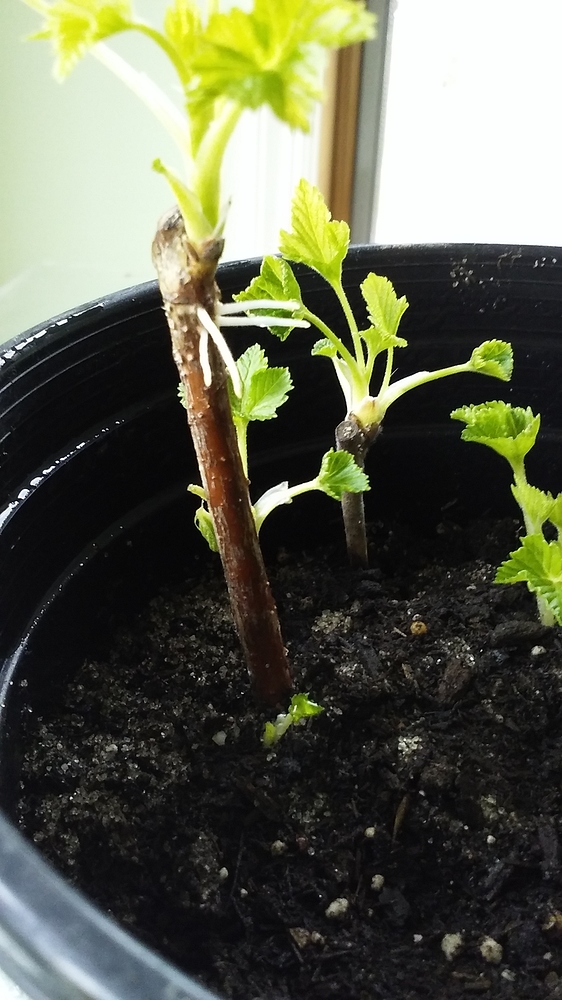 Looks good, I just got a belaruskaja and took some cuttings off the top and stuck them in soil/sand mixture on a heat mat. Seems they will root rapidly! Ive never tried BC before so it will be interesting… How are yours looking now?

Is it “belaruskaja sladkaja” you have? Where did you initially get the cuttings?

Its from hbusa, you can check it out on their website. I bought a plant that was a foot or so tall when it arrived but I cut it down to just a few growing buds and planted it like that, trying to root the stuff I cut off of it.

I got Tiben from there, because of the high production. 2nd leaf now, but has not set a lot of currants. Hard to find any from this Polish series of hybrid currants. It is supposed to out produce everything else. I got Consort also from Bob and that thing is a beast. If it can be out produced that would be cool! Always willing to trade for others.

I found this article insightful. Id be interested in doing some trades possibly down the road as well. Not even sure if Ill like black currants as I have never tried a single one…
https://thefruitnut.com/2014/07/09/black-currant-tasting-varietal-comparisons/

I have Tiben and this should be it’s first year to fruit so I can’t comment but I have Titania and that is the one to beat for sure. Tall plant with a less spreading form. Large berries and CRAZY productive.

I use to be OK with fresh berries and loved uncooked jam back in Russia, where black currant is very common. And it is absolutely must have for leaves if you pickle. But when I finally got my first bush(do not remember name) here I was surprised how unpleasantly bitter fresh berries were. My second one (Prince Consort) is better, but still not that sweet as I remember the berries form Russia. This is why I am interested in Beloruskaja, I know we had it at some point back in Russia.

Finally, someone to translate!!! https://youtu.be/Qc9hqdLwKQc

I also have black currants and have never eaten them and want to know about propagating them from cuttings…enthusiastic aren’t we! Right now my currants have leafed out and flowered; is it too late to snag a branch and try to root it…should they be (more) dormant?

I would cut a few 6-8 inch twigs, remove all growth but the very end leaf or bud and plant so just the end is out of the soil. Use no nutrient potting mix or sand/perlite. Cover it with something clear/opaque and put it in a shaded area. Check for roots after about 3 weeks. Once they start actively growing and have roots, you can transplant them wherever you want.

I up for trades in the future for sure. Looking for Blackdown I had it from Bob, but it just died on me. Belaruskaja sounds good too.

Do you expect me to translate whole thing?)) This is about Honeysuckle, not currants. They mostly discussing properties of different varieties and way to harvest.

Yeah, I was mostly kidding. Im impressed with some of those berries and Ive heard that BU has brought over a bunch of russian honeysuckle varieties to the US, but no idea what is what and their descriptions arent great either… on their site. They could have at least added subtitles!

Lets do this, you give me names, I will search Russian info and translate it for you. It is much easier to do from written text than from video. Or give me link where you see it.

Where I live, the transition from winter to spring is very gradual. It rained nearly every day i March and April with temperatures around 50 degrees.

Here, I can cut dormant, or emerging stems, and just literally stab them into the ground where I want them to grow, and get very high success rate at rooting.

ets do this, you give me names, I will search Russian info and translate

Berries Unlimited renamed them to American names, so that won’t do any good!

Here is some info on the new cultivars from BU
https://www.berriesunlimited.com/HoneyBerry_History/info_18.html

I have Honey Gin and Blue Banana coming I would trade rooted plants for Honey Delight and Honey Joy. I’m already trading for Giant Hearts a Sweet Plus Japanese cultivar. You will need other Japanese cultivars for pollination, I already have three. I can trade those too if you need a Japanese one for pollination. I have Solo and Maxie and an unamed cultivar obtained from Dr Thompson’s orchard.