My mother wanted to plant a row of blueberries as an edible landscaping hedge. Ornamental qualities are the most important, followed by taste. Blueberries with pretty foliage that want to grow in a more compact Bush shape, as opposed to some varieties of rabbit eyes that just want to grow UP.

I have Centurian, Powder Blue, Brightwell, and Pink Lemonade, and the only one of those I could really recommend for ornamental use would be Pink Lemonade, but I think she’d like two different kinds to alternate. Pink lemonade has gorgeous minty-green leaves, a bushier shape, and beautiful pink berries…contrasting that one with one that ripens to a beautiful blue would make a nice effect, I would think, but I’m open to any thoughts or suggestions! (Or even another edible landscaping idea that would form a nice, carefree hedge in the South, Zone 8a.

I appreciate your help!!

ETA: I just put rabbiteye because to my understanding, rabbiteyes are much more carefree, and my mom won’t want to be fussing a lot with them. But Southern high Bush would be fine too, as long as they wouldn’t require specialized care.

Spartan seems to have a bushy aspect to it. Personally, I think powder blue has the best foliage color, but as you indicate the bushes tend to go up. There are some more or less dwarf varieties out there, but I don’t know which ones they are.

The University of Georgia is working on ornamental cultivars of Vaccinnium elliottii (Elliot’s Blueberries, May-berries, or Huckleberries). This species has very small leaves, and small eatable (delicious) berries. It’s ornamental claim to fame is great fall color and the colorful leaves tend to hold on through much of winter. I don’t know when UGA plans to release these ornamental varieties, but it might be worth checking into. I grow V. elliotii in my home orchard and they fruit well for me. I find them attractive, especially in fall but they tend to be large shrubs. They do have a nice wispy appearance to them, and some of them also weep. God bless.

Brazelberries are a line of ornamental raspberries and blueberries. The name has since changed, and the price has come down too. Not sure if suitable for your area? Check other nurseries too.
http://www.raintreenursery.com/BSH_BRY/

The Glaze cultivar I see has red berries that turn blue, this is a trait of rabbiteyes I think? I know Northerns don’t do this. They turn green to blue.
They suggest using it as a hedge.,

I grow about 15-20 different varieties of rabbiteyes, and of all those Bonita has been the most outstanding for fall color. It’s a pretty good tasting blueberry, too.

This year, my young Climax rabbiteye threw out crazy-lush blue-green foliage growth. Not sure if it is too vigorous for your purposes, but in the summer, it looked impressive. The tent caterpillars sometimes work it over, chomping up the leaves (surprised when I saw that).

Northcountry Minnesota northern half-high has pretty fall foliage, and a squat spreading nature. Small yummy berries. Mega cold hardy; can be left outside in z7 in a pot all winter with no protection. Not sure how it would take your warmer zone.

Northcountry Minnesota half-high blueberry just this week beginning to show its ornamental autumn colors. Here it is this evening at dusk. 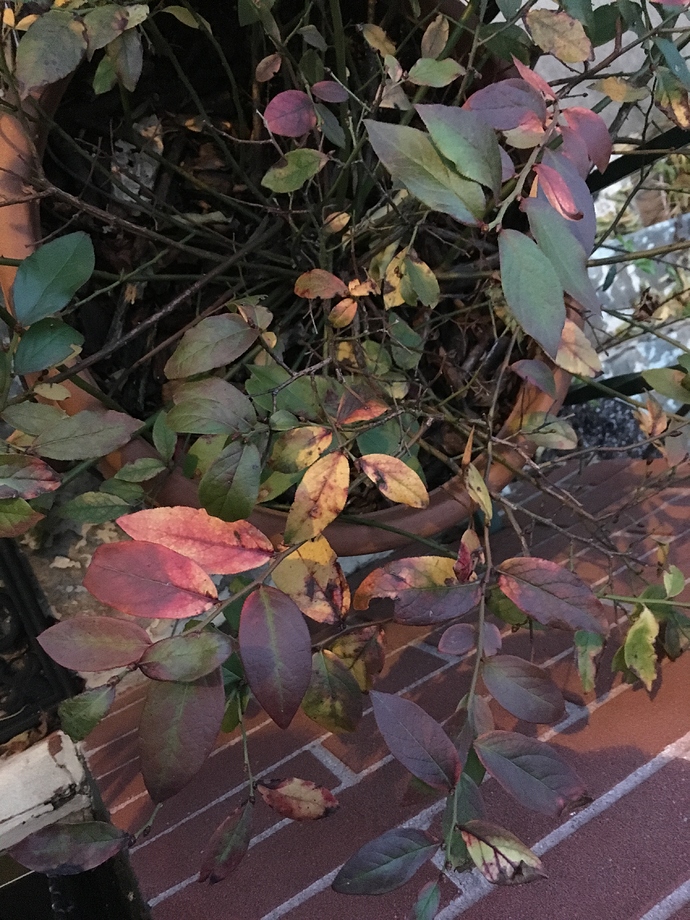 Here was my Climax rabbiteye back on May 30th outgrowing a sea of Japanese stiltgrass. Look at the lush foliage. 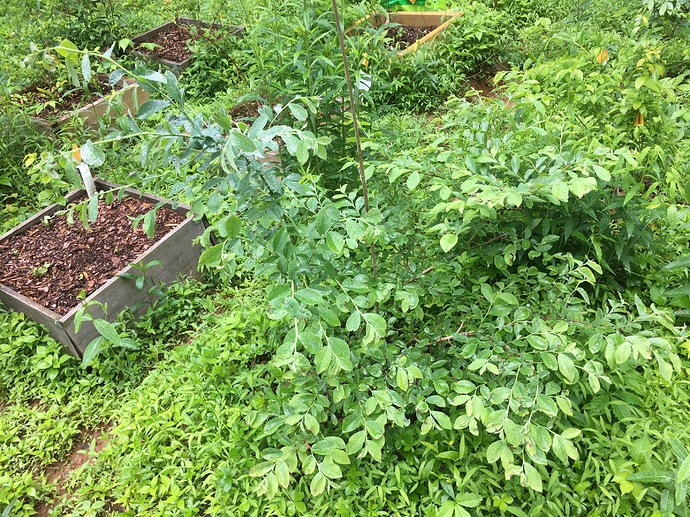 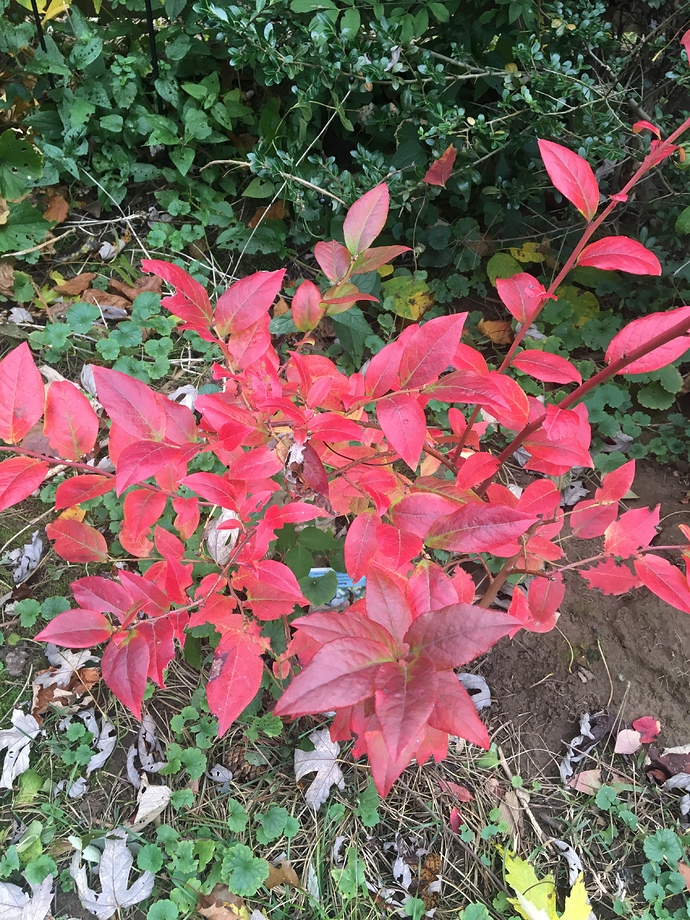 Gorgeous! The leaves on that one seem big. Where did you get it? Elliot’s blueberry is what I call “huckleberries” and yes, they have exceptional fall color. UGA is working on ornamental varieties of it. I don’t know how close they are to releasing it. God bless.

Summer Sunset is another ornamental variety that has multiple colors on its fruit.

Do you have it? What is your opinion on the fruit? How about the growth habit?

I don’t have that one, but it was released a few years ago. There’s some more info here:

Nice colors. My 4 different bloob plants are a bright red as well. I just planted them in May, so I doubt we’ll get any fruit next year.

Has yours produced anything?

Nothing yet. I planted them last fall. I hope next year is the year!

The leaves on that one seem big. Where did you get it?

Got it last fall from Lowes. Also got a Blue Crop. But Elliott put on more growth than Blue Crop this year. I like the growth habits and color on Elliott better.

My Ochlockonee rabbiteye reached six feet tall this year! It is still holding its leaves while most others are bare. Beautiful red fall color. 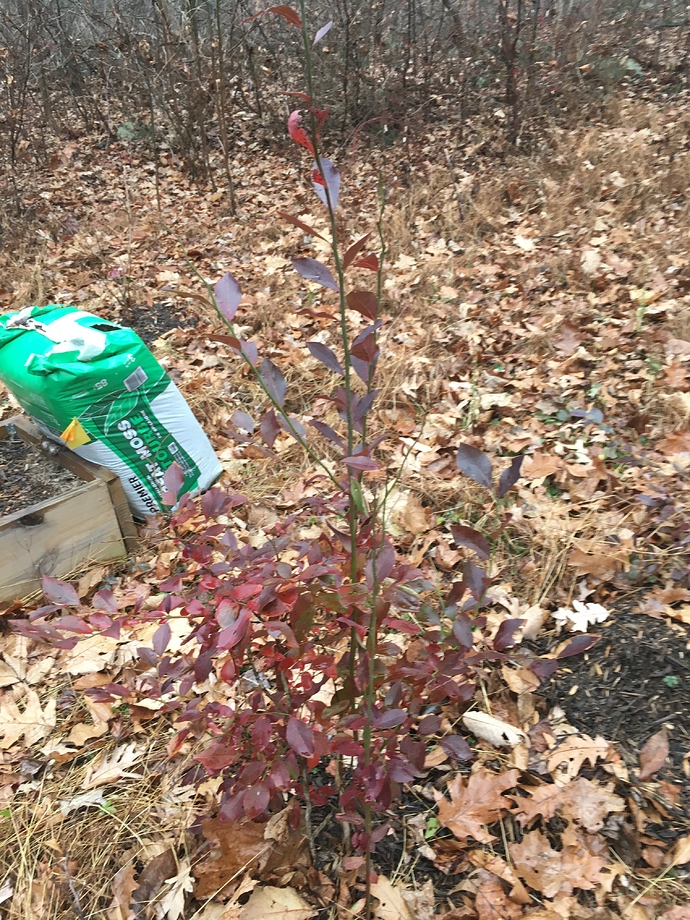 I have a big mix of both types, although not so many of the new varieties. The one that was just too pretty to take out of the pot in front of the house was Sunshine Blue. They have some very odd characteristics that make it really good as an ornamental. It even flowers in the winter in the snow here!

I have Centurian, Powder Blue, Brightwell, and Pink Lemonade, and the only one of those I could really recommend for ornamental use would be Pink Lemonade, but I think she’d like two different kinds to alternate.

Premier plants show nice fall color and also very early fruit. Legacy is a week to 10 days earlier and produces nice fall color too. Its easy to grow like a Rabbiteye. Both Premier and Legacy produce large bushes and may not fit the need for a smaller more compact bush.