Does anybody have multiple varieties of American Elderberries growing in a zone 7 climate?

We are looking for information on variety performance for our area.

No research on Elders from my state University at the moment so we are testing 8 varieties.

We see differences but it’s too soon to say which varieties are best suited for my central NC climate. All of the varieties grow like crazy. A little nitrogen produced 12 foot canes on some varieties.

I understand the USDA provided a $5 million grant to get better information. Some of the grant money will test for health benefits for American Elders compared to European Elders.

Have you seen the freeze first methods?

I have only tried using a fork… But fabricating a “really big fork” would be helpful for a commercial producer.

I am growing every named variety that exists as far as i can tell…even obscure ones.

I cant give you any data as im only a year into the madness that is likely to happen.

This is the most comprehensive data and information that i have come across and its extensive… on every aspect of everything to do with Elderberries. If you are interested.

THE HERB SOCIETY OF AMERICA’S ESSENTIAL GUIDE TO ELDERBERRY

Thank you for that information. It looks very good. I’m reading through it now.

West Virginia University has a pretty good guide on most American varieties.

University of Missouri has some good research for their climate including some video. The guy in some of the video is their fruit specialist who selected several of the newer varieties from wild plants

@disc4tw
We tried destemming the frozen berries which was easier but it left a lot of small stems and junk behind. Really big fork is interesting idea. We raked the fruit over 1/2 stainless hardware cloth last year but it was not much fun and we still got a bunch of stems and junk with the ripe fruit.

Im sort of interested in this technique for removing the berries from the stems…by using a gold mining pan.

Which gave me an idea for sifting my compost… so i might have to buy two of them. 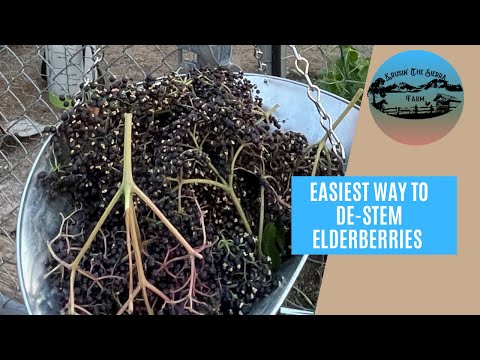 I was thinking one way to deal with the remaining stems would be just washing everything once it’s done.

Another is a blower or strong fan to blow away the lighter pieces (stems).

Would cooking and straining the juices be an option? I’m not sure what your intended final product is.

if youre juicing or jamming them some stems wont hurt as its getting strained anyway. the best producing ones i had here were wylewood and bob gordon but i heard the hybrid marge produces even more. unfortunately the 1st 2 mentioned didnt have time to ripen in my z4 climate but had huge cymes. now i grow johns, adams , york and the only wild one i found growing on a old logging road.

How does your wild one compare to the named varieties?

the cymes and berries are smaller as is the whole bush but it has alot more of them so it makes up for it. tastes a little different. i like it.

I bought a couple named varieties from OGW… ranch, york… and they could not hack it here.

Awful foliage issues… i pulled them after 3 years and no fruit.

Saturday i dug up a wild crown of elderberry and transplanted them into my field. I expect these will do well. I am going to add one more crown to that bed soon from a different location.

Ps… that clump of elderberry was pretty easy to dig up and transplant.

you might try the blue western elder and the European ones. both are more heat tolerant from what ive read. i believe one green world carries both.

Thanks for the recommendation @steveb4

The york and ranch elderberries did produce a few berries the first year I had them… and they were at least double the size of my wild berries. But by that fall… the heat and humidity here had them seriously stressed and they went down hill fast. The next two springs they did not even bloom. Those varieties are definitely not for the hot humid south east US.

I like the wild berries just fine, they are smaller, but I expect more potent too.
And they live and thrive here bloom and set lots of berries.

I think I will be happy with them.

I tried to root some wild cuttings one year, but had no luck. This time I just dug up and transplanted a clump. I think that is going to work.

by using a gold mining pan.

I love the idea but the gold mining pan would not work on my fruit. They are too large to fit through the opening.

We used 1/2 inch stainless hardware cloth last year to rake the fruit over which fell into a food grade bus tray where we washed the fruit and skimmed off as much of the trash as possible. Did about 200 pounds and hated it.

I like to dehydrate them… and store them … vacuum sealed … in mason jars.

Easy to get some out and make elderberry tea or syrup, if you start feeling a sick.

I’m 7A, possibly 7B, and have 3 varieties - Nova, York and a wild variety that I got in a pack of 25 from the Missouri Conservation folks. The one that I’m growing from Missouri is actually equal to if not better than the York and Nova plants. They are all vigorous and I usually chop them down to a foot or so each winter and they are 10-feet or taller by fall without any fertilizer. I see a lot of descriptions for cultivars saying 6-8 feet, but that has not been my experience. I can only imagine how big they’d be with a shot of N.

Nova is probably the shortest, although not by much, probably topping out at 10 feet. It seems to be more spreading and has sent out suckers 4-5 feet from the base. York is the tallest, probably hitting 12 feet tall without any fertilizing and I haven’t seen any suckers. It also seems to have stronger canes and stays more upright. The Missouri one is between them in height and hasn’t suckered yet either which I like. If cut back to the base they all produce a lot of cymes and tons of berries, with York being slightly bigger cymes and berries than Nova and the Missouri plant being the largest berries (still only about 1/4 inch at the biggest) with cymes almost as big as York. Keep in mind, this is one plant of each and they are in slightly different situations in terms of crowding by other plants, a little shade, etc.

My Nova and York were from Pense, which has given me and some others here mismarked cultivars of other types of berries, so I hope they are correct but really have no way to tell. In fact, I wonder how many that are floating out there are really the specific named varieites they claim to be since people trade cuttings all the time and I’m not sure someone could really tell for sure if they had something other than they thought since the differences don’t seem that obvious to me and the variety descriptions I’ve read don’t provide enough detail for exact IDs.

We use about half the heads as flowers to make syrups, cordials, etc. Separating flowers from stems is just as tedious as separating the berries, but we like what we get from the flowers and it spreads out the annoyance of processing them to two separate times of the season. For simplest processing of berries, I’ve frozen the full cymes of berries and then just put them in a fine mesh bag to squeeze the juice out, which has worked for making jelly pretty efficiently without all the destemming, but I don’t know if not cooking with the skins and seeds included reduces some of the health benefits.

I see a lot of descriptions for cultivars saying 6-8 feet, but that has not been my experience. I can only imagine how big they’d be with a shot of N.

We put out some N last year and the bushes grew like crazy. Not going to do that again.

Did you squeeze the juice with some type of press?

If I understand, cooking the fruit first removes some of the desirable health benefits but also reduces the chance of potential toxins.

Did you squeeze the juice with some type of press?

If I understand, cooking the fruit first removes some of the desirable health benefits but also reduces the chance of potential toxins.

Each year I protect 10 or so heads of berries by putting a mesh bag over them (sold as 5-gallon paint strainers) and cinch it down on the stem with a small cable tie. To harvest, we just cut them off at the stem leaving the bag in place until we process. One time, when I didn’t have time to process right away, I just threw them in the freezer to deal with later. When I took them out they started to thaw and I could see the juice already coming out from the thawing berries, so I just took the whole thing, still in the mesh bag, and wrung it out right into a saucepan. I’m sure you could do it without freezing, but it did seem like the freeze/thaw broke them down a bit and the juice came right out.

I do feel like there is just so little research out there on elders that whether this is a good technique or not is hard to say. Maybe I’m missing out on a lot of good stuff in the skins and seeds, but then as you say maybe it is actually keeping most of the toxins out of the pan.

I really wish the descriptions for the various varieties seemed more complete or even accurate. Have you noticed any that seem like clear winners for berry size, production, etc.?

try steeping them in mason jars in vodka for a few months then strain and warm the liquid for a few hours to remove some of the alcohol. add a 1/2c sugar and large squirt of lemon juice. dissolve sugar, then bottle. its shelf stable and very concentrated. take a couple tablespoons for what ails you. found the recipe in a 1930’s home remedy book i found. except they used whiskey instead. i chose vodka for its neutral taste but could use any hard alcohol. this way you have some on hand and dont have to make any when you’re already sick. sometimes mix in some black currant for variety. if left at full strength it makes a great adult beverage mixed with some sprite or ginger ale.

@steveb4 that sounds like a great recipe. Thanks for sharing it.

@steveb4 … yes thanks for that recipe.

I have made tincture with ginseng and vodka before… never thought about trying that with elderberries.