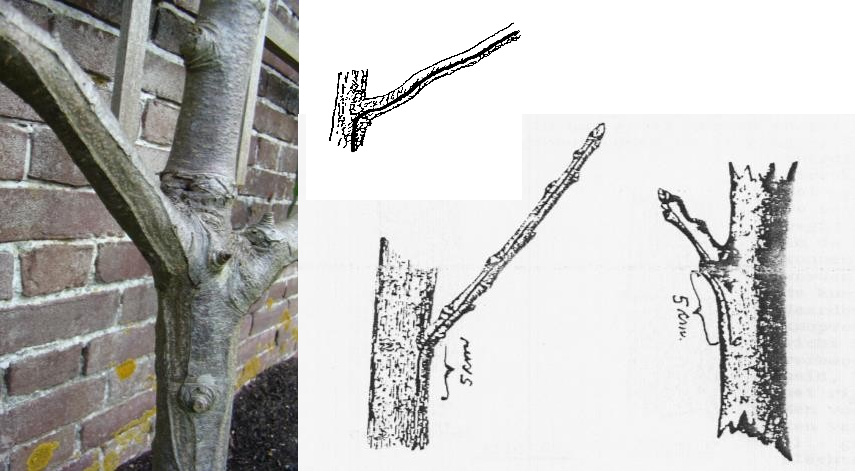 To increase thickness and grow of a branch. Make a lengtcut on the downwards direction of the branch. Start 5 cm in the main branch and cut through the cambium.

Perform this technique in spring when buds start to give leaves.

Roland Thank you. This is very interesting. I don’t believe I remember ever having read about this technique.

Where is that image of lengtesnede from?

I mean the source - which book or document?

Information from my dutch teacher and he wrote this book: 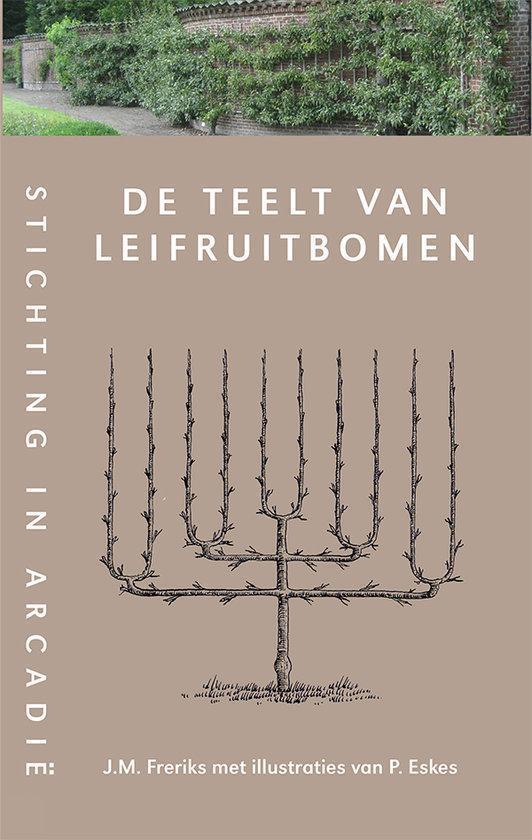 I’ve just pruned back my 2 espalier apples and finally noticed somethings from my trees that I have not paying attention to!

The trees overall look is a little odd due to this “issue”! The trees also need some fungicide treatment next year. I wonder how much impact would leave fungus caused for flower/fruit production? 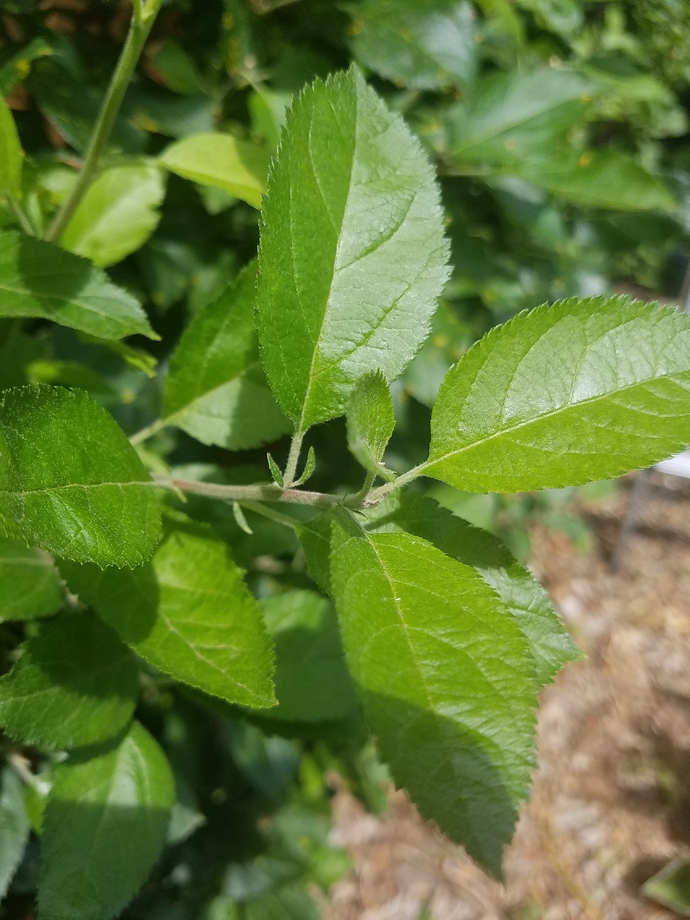 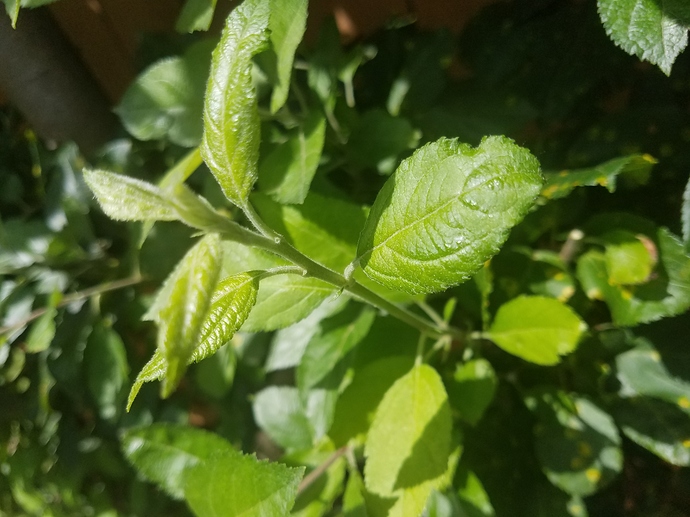 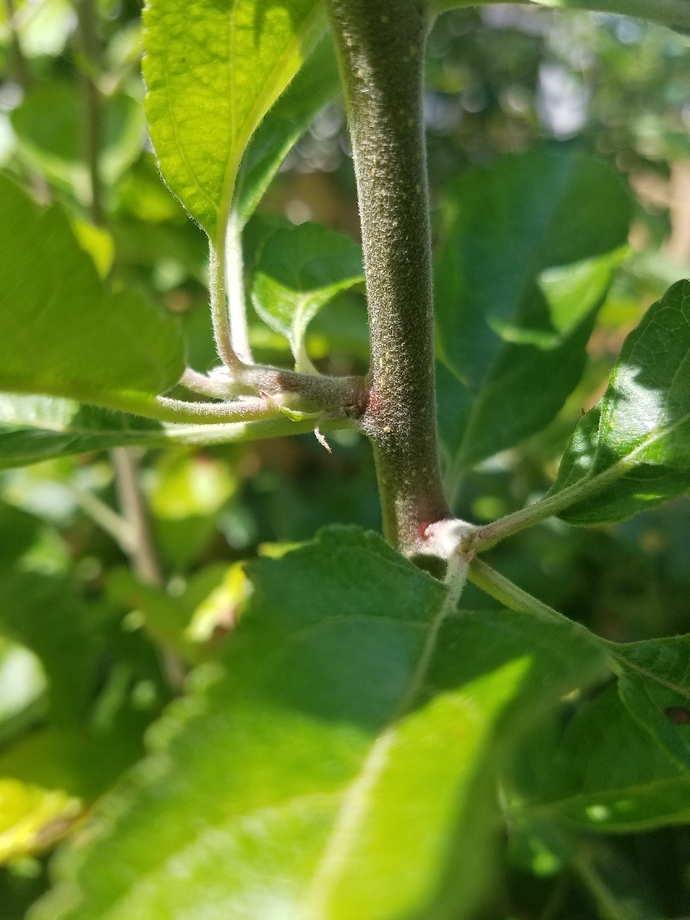 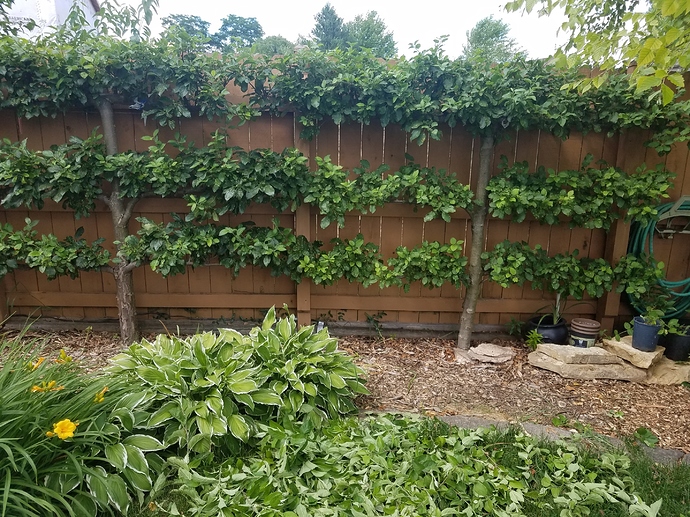 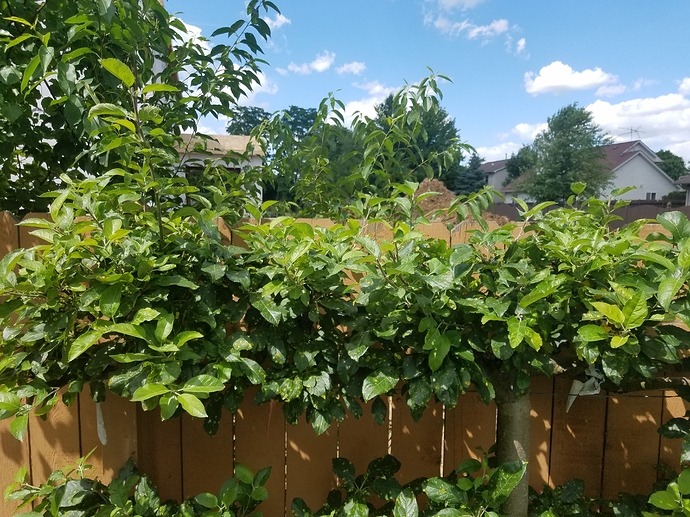 The trees look very nice, I’m hopeful for you to get some fruit

It seems u did a good summer pruning. Let me give u some feedback.

Pic 1, The top stop growing and this can be converted to long fruitwood. At the end there can grow a fruitbud.

Pic. 2 Like i write in my previous post. U are correct to prune this to a downward bud.

Overall, the trees (special the top layer) looks very crowded. Maybe next year in May u can remove some vruchtzetels that are spaced to close. Remember a vruchtzetel need enough space. U can place about 8 to 10 in one meter main branch.

Don’t forget, the pruned branches in Pic 2 will start to give new growth over 2 weeks. 6 weeks later u have to pinch the new growth like i write in my previous post.

About the fungi: In Netherlands its better not to espalier a apple in front of a wooden fence or wall. A apple need a lot of air circulation to prevent diseases like fungi and aphids.
Pear and peach are very good in front of a wall.

I think I finally found the thread I need! Pruning espaliers!!!

I planted these 2019 on Mother’s Day. This spring I had loads of flowers on apple on right. Nothing on pear on left.

In June I pruned them back for size management and left only a few apples on.

Now, they have grown to the sky. Can I safely take them back down to 3-4 leaves? 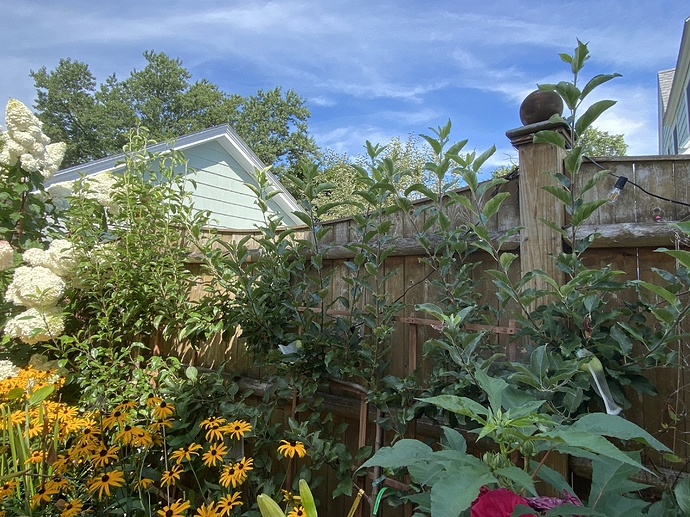 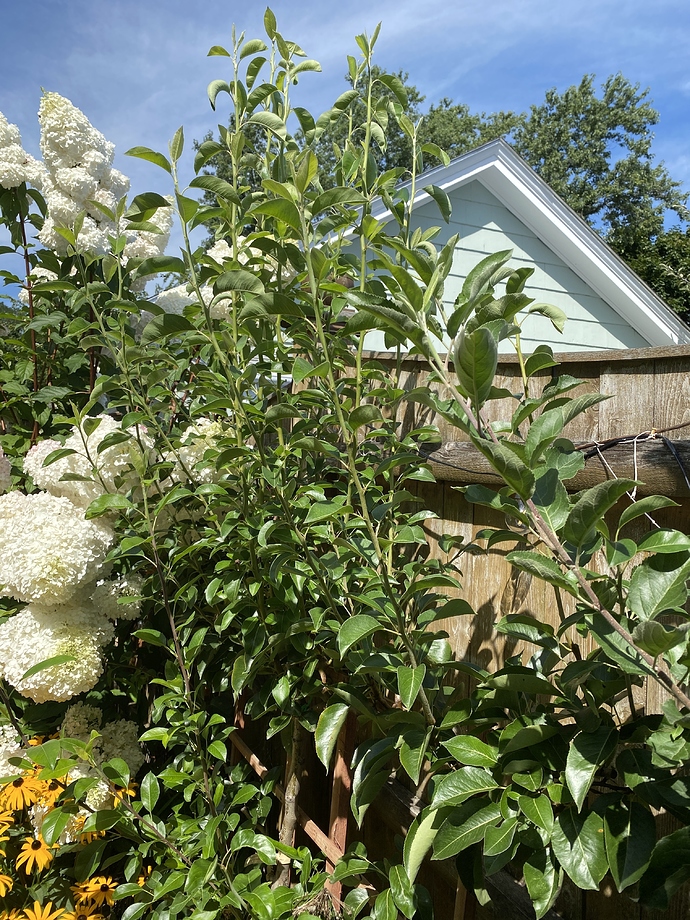 @Colleen7
As to the apple…
I would prune to 3-5 leaves now. Expect some new shoots to start and if they are in a good spot leave them grow until late Sept and tgen prune those off the same way and then mercilessly cut off ANY new growth that comes after the Sept haircut.

As to the pears, do the same but, depending on the cultivar, the pears may take 3 years plus to flower. Most of the pears I planted in 2012 only started some fruiting in 2018 and only this year will I have more fruit than I can use myself.

This is what worked for me.
Mike

My espalieried Reinette du Canada is pumping out new shoots and blossom cluster and pollinated new fruit. I am just pinching out the leaf buds I do not want. I want it to have a certain shape, A giant pitch fork! Its working.

Love this. I am an Edward Scissor hands st heart.

It’s a bid late for correct summer pruning but just try. U will not kill the tree by it J

There are a lot of strong vertical branches. Prune them at 0,5cm, hence the sidebuds will wakeup and give more horizontal positioned branches.

Youre branches that grow more horizontal can be bent to 45° or lower and pruned at 10 leaves (for apple). The last bud have to be pointed downwards. Reed my previous post in this topic.

I notice also a big problem. It seems u have two horizontal layers. The toplayer is already mutch stronger as the first horizontal layer. This will make the first layer will be his full live weak and gave less fruit.

This problem is because the toplayer is made to early. First the layers below have to be fully developed before u can start with the next layer.

I see this big mistake a lot!

@tomIL @Colleen7 how are the trees now in winter, can u show some pictures and do u see fruitbuds?

I really appreciate you following up with me. I will take photos and send to you. Thank you so much for your guidance!

I’ve just gone out to take a look but hardly detected anything. We’re deep in winter now, everything seems tightly hold up. If there’s any sight of budding, I guess I won’t be able to detect until springtime! Still a newbie with apple!

Still a newbie with apple!

or any espalier expert, please advise. Thanks.

you’re so humble. You are actually the expert, since your espaliers actually have the thickest trunks, and most importantly, the thickest rungs have seen here . With other espaliers, the laterals are too spindly and need to be conspicuously suspended/bent in place by wire, whereas yours don’t even need the wires anymore and will hold themselves like stiff candelabras

i am not an expert myself but my 2 cents’ advise(for an enhanced cosmetic effect) is for you to remove the wires . The laterals seem to be holding their own against gravity. Once an espalier attains a freestanding stance-- it will also have achieved the most desired aesthetics. Yours have enough biceps so removing the wires is one way of flaunting it

you could further fatten those laterals if you deflower or defruit(if that is easier) the shoots for at least a couple more years. This will make the specimens want to grow vegetatively even more. And don’t prune the shoots at the most distal parts of the laterals, as the only way one could thicken the distal portions of the lateral stems is for the most distal shoots to keep growing. The distal portions might start sagging, due to the weight of the shoots, but you can simply just behead the apical growths radically once the distal stems get thick enough.
if you actually decide to remove the wires, and the laterals start sagging distally at the tips, you could take advantage of the wooden fence and just drive thin nails on the fence closest to the tips that are sagging, and tie the tips for support. The nails will be less conspicuous than wires.

In Netherlands its better not to espalier a apple in front of a wooden fence or wall. A apple need a lot of air circulation to prevent diseases like fungi and aphids.

i agree with the dutch’s approach, and more-- especially if you want your espaliers to be less leggy/droopy and more fruitful. Full sun makes for stiffer wood growth(girth wise, relative to length), so it would help speed up attaining the desired freestanding stance. Moreover, a wall(of course depending on its orientation along the earth’s axis) will likely cast shade on the specimens, and more shade means less fruits.