So just let the most distal shoots grow? What about the shoots closest to the trunk?

yes just let the most distal shoots develop @Jenna1, and would actually prune all of the most proximal shoots as soon as they sprout in spring. The OP’s trees’ laterals are already muscular near the base, but may need to get beefy at the tips. The intent is to maintain metabolic/physiologic relevance of the most distal portion of the laterals. Since with espaliers, longer AND thicker laterals are what impart the established/seasoned look.

What do you mean by metabolic/physiologic relevance?

it is just the 5000$ smarty-pants term i used for “leaf-out-or-die” pruning technique to promote and maintain girth growth at the distal portions of the laterals lol. Anyway, as have mentioned, the thicker the laterals, the more aesthetically pleasing the espaliers. The OP’s specimens’ proximal halves are already muscular and stiff, but the distal halves may need a bit more bulking up in girth

will post a pic that explains my rationale tonight

so @Jenna1 , below is a jujube lateral segment. The segment below spanning X to X.
jujubes are the easiest species to espalier as the stems are initially bendy and can grow up to 4 feet long, and they are typically borne perpendicular to the main trunk. They literally espalier on their own as uprights develop from the laterals and capable of developing at the most distal nodes. On photo below, the upright stem labeled as B is more proximal to the main trunk, so it obviously gets the lions share of sap. Generally speaking, if there are several uprights borne on a lateral, the upright most proximal to the trunk will be the most robust, and in this photo, it has practically taken over as shown by the girth of the segment from base of B towards the trunk is quite thick, whereas the lateral segment distal to base B(depicted by yellow arrow) has lagged in bulking up and quite spindly. If i wanted to impart ‘physiologic relevance’ to the lagging segment(the distal segment), all i really need to do is decapitate B and radically prune or de-node the rest of the tree and just let the nodes on upright A to grow. Ultimately the distal segment would get thicker as the upright stem finally gets the lion’s share of sap. This is what i meant by “leaf out or die”, because the tree will be obliged to grow more leaves and stems where there are viable nodes, and if the only viable nodes are at the tips of the laterals, the tree will have to develop . Jujubes are fairly related to apples, but even if they are not, if you look at the shoots growing along the lengths of OP’s laterals, the most robust ones are closest to the main trunk. By pruning those proximal shoots radically, the tree will be obliged to develop new growth at the distal segments of the laterals, which would then further thicken the entire lateral and impart the seasoned, muscular appearance 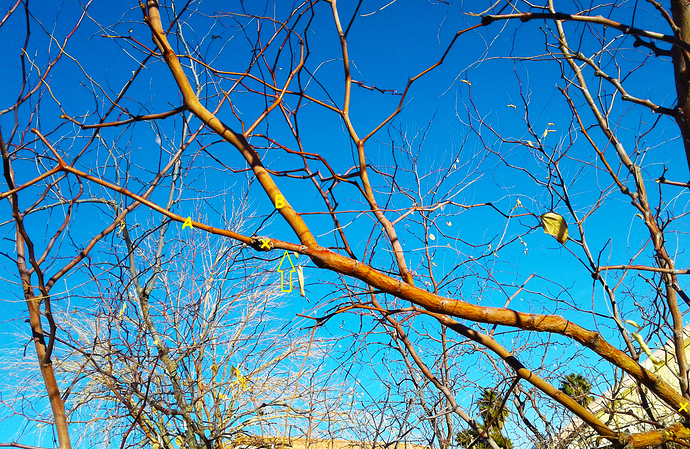 and below is another example of a jujube tree espaliering on its own. It is not too visible because there are so many other branches of neighboring trees, but the lateral segment spanned from X to X is 3.5 feet long and is borne at a right angle to the trunk. Can make it longer by decapitating the sole upright on it to let the distal segment develop, or simply cut the distal segment and just bend that upright down and splint it with the lateral, to make the lateral even longer and in a straight line. Anyway, below photo again exemplifies the need to keep an eye on active shoots(on laterals) growing close to the trunk. If we leave them to their own devices, the lateral segment distal to the bases of said shoots will regress(segment of lateral depicted by yellow arrow) 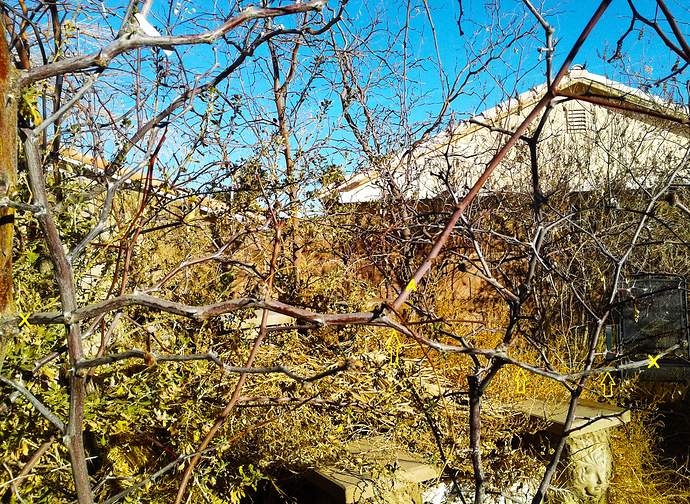 Just to clarify, by “espalier on its own,” do you mean, “generate spur-laden horizontal scaffold branches with a minimum of vigorous vertical growth that would require pruning”?

I’ve actually been curious about whether jujubes would be suitable for espalier, though probably just idle speculation for my climate/microclimate.

by “espalier on its own,” do you mean, “generate spur-laden horizontal scaffold branches with a minimum of vigorous vertical growth that would require pruning”?

you can have that if the jujus’ laterals are long enough which gives an instant espalier appearance. Juju laterals are where the majority of fruiting spurs are borne, from which herbaceous fruiting stems grow out of. Laterals are semi-deciduous, usually lasting 4 or more years if the tree specimen is not strategically pruned. They can last longer than 7 years from my experience, and likely indefinitely if uprights are continuously pruned. The nodes will grow into spurs more than an inch long. I posted a photo somewhere here of a juju tree with really long laterals and will repost once find it. Jujus’ laterals and even uprights, are quite malleable at a young age(you can braid them), so all really need do is splint while they are young and bendy. Since the laterals are usually borne at right angles to the main trunk, all one need do is splint them to straighten them. Laterals will thicken with time, especially if tree is strategically pruned. The advantage with jujus is that they are immune to blight/canker/borers, which could ruin an apple tree that has been nurtured, trained, and manicured for many years. One could literally customize-graft a jujube tree by drilling holes onto them and inserting debarked upright juju stems without worrying much about microbial/fungal infections or insect infestation.

closer to the poles, though, apples have one thing going for them–being more resilient to frigid winters and late frosts, hence less dieback. In warmer climates, jujus and figs are easily the most ideal for espaliering since they are bendy, long-lived, and virtually pest-free and disease-free.

anyway, wouldn’t want to hijack this apple espalier thread so will just tag you when find that photo. Posted it here @JinMA

Thanks for the enlightening posts Rafael. Your pics and explanations are so instructive

Apple on top
Pear Below. 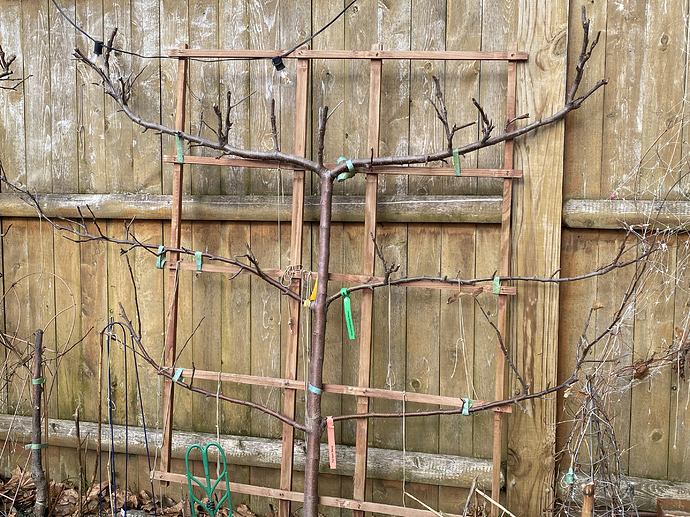 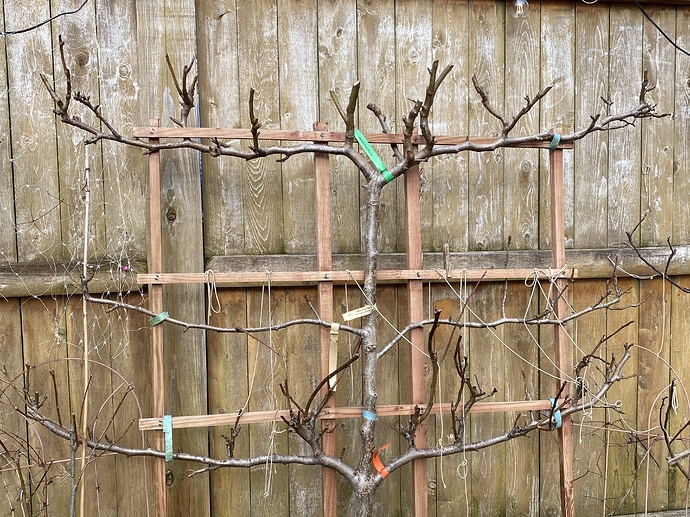 Thank you for posting these pictures. They give a really good look at the complications involved in managing a multi-tiered espalier. (My only experience is with a Belgian fence, which at least on the level of individual trees is quite a bit simpler.)

Here are a couple of things that stand out to my non-expert eye:

Hope this is helpful, and enjoy your trees!

@Roland, Thanks for your helpful feedback! A few of my trees have the problem of top layers being thicker than bottom layers. What can I do about it at this point? I have 3-4 horizontal layers and would rather not chop them back to the lesser developed layer at this point.

A vruchtzetel consist off 1 branch with some flowerbuds and at the end a normal bud. So remove the extra branch at you’re vruchtzetels.

The top layer is strong and u have to do something to give it the same growth as the bottom layer. To do this cut at the bottom (bleu lines) 1/3 deep in the top layer. Do this when the buds open. 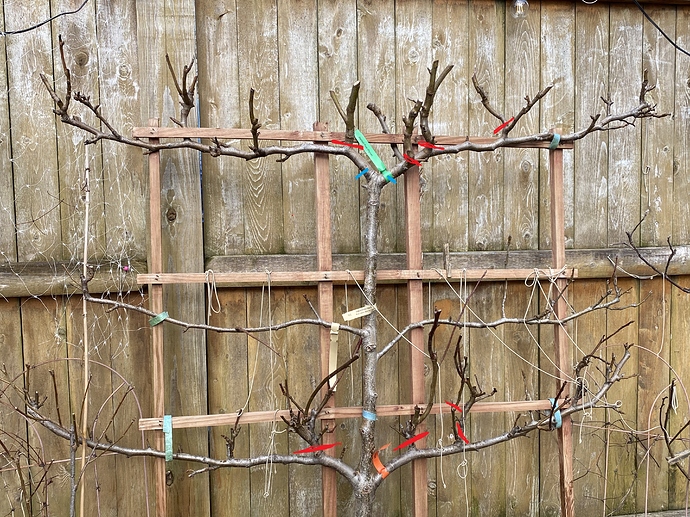 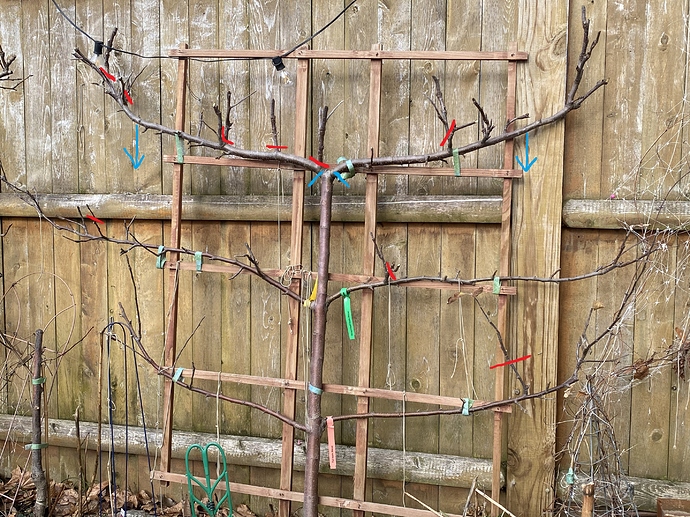 The weak horizontal layers u can give a Lengtesnede when the buds open. (See my posts in this topic).

Because of the lengtesnede the branch will get more thickness and thickness is more growth.

Cut 1/3 deep in the top horizontal layer.
And use a lengtesnede in the weak layers.

Do this when buds open.

See also my posts in this toppic.

Thank you so much Roland!
One question, when should I cut the thick Fruit branches (vruchtzetels)? Can I do it now? I can’t wait to try the other techniques you mentioned. This is all so interesting. I love my espaliers. I have a tiny yard and they are my pride and joy. I examined them every day.
Thank you again.
Colleen

In this topic we see a lot of people have a weak bottom (lower) layer and a strong top layer. This is because in the first 2 to 3 years u make the bottom layer. When its full length and have a good thickness u can start with the next layer.

When u start to soon with the next layer, the lower layer will be always weak. It’s almost impossible to correct this.

The vruchtzetels u can do now. Dont prune when its freezing.

I will get right to work after I pick up all my garden tools at the knife sharpening expert on Friday. But until then: I have pretty snow to admire. 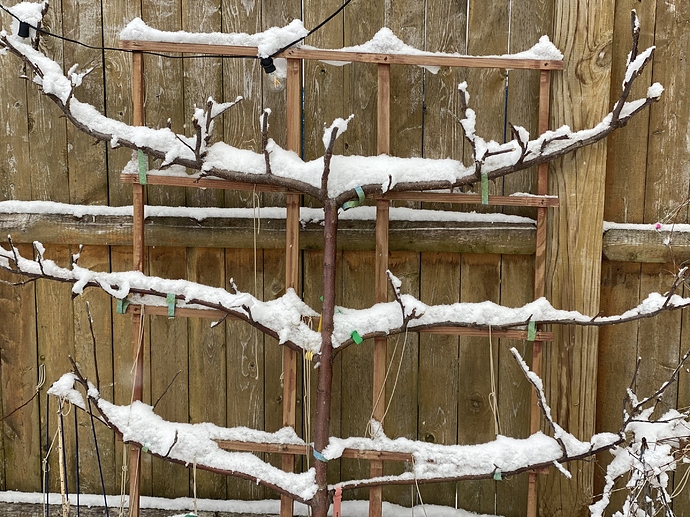 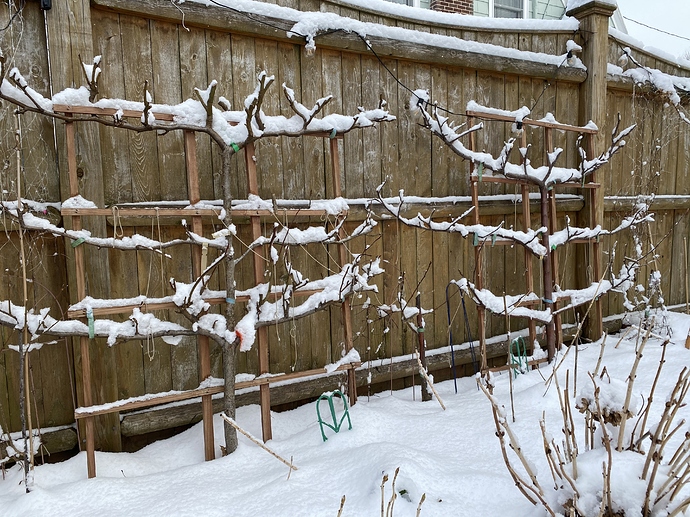 Roland,
I have a question about cutting into the cambium. These are all horizontal grafts. Is that ok?

I did do the cuts recently recommended for the winter. 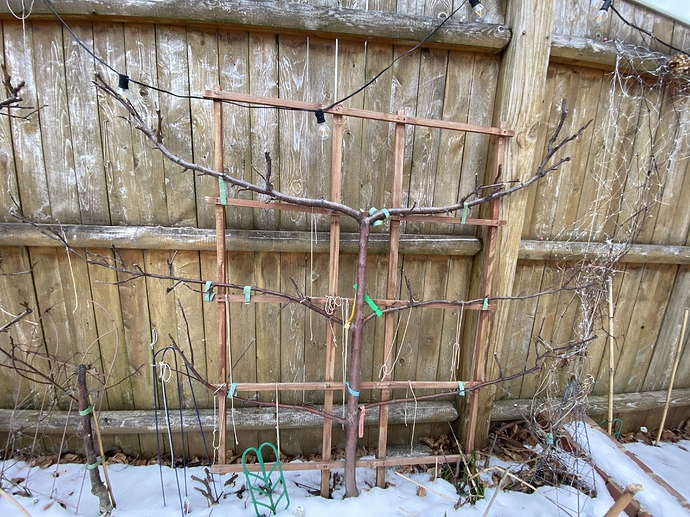 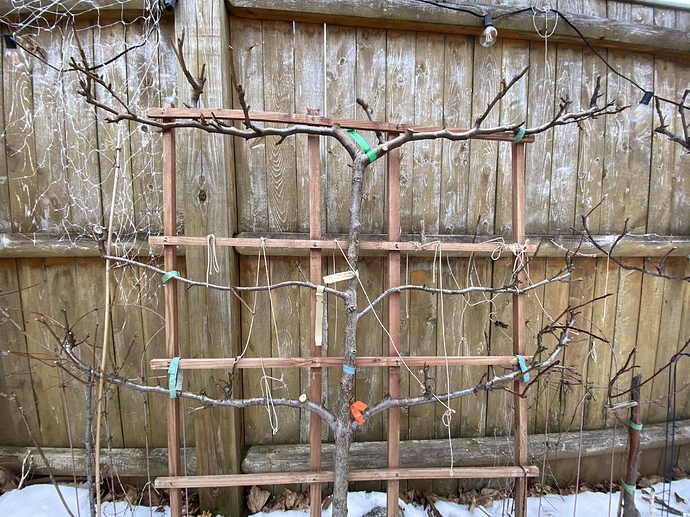