Lemon Frost is truly intermediate between a Lemon and a mandarin since they got it by crossing the Meyer lemon back to the mandarin. Actually I very much like the combination, but I like it because I’m not trying to peg it as a lemon necessarily. It’s just a very tangy somewhat lemon flavored tangerine. I would probably very much like a very ripe Myer Lemon as well. 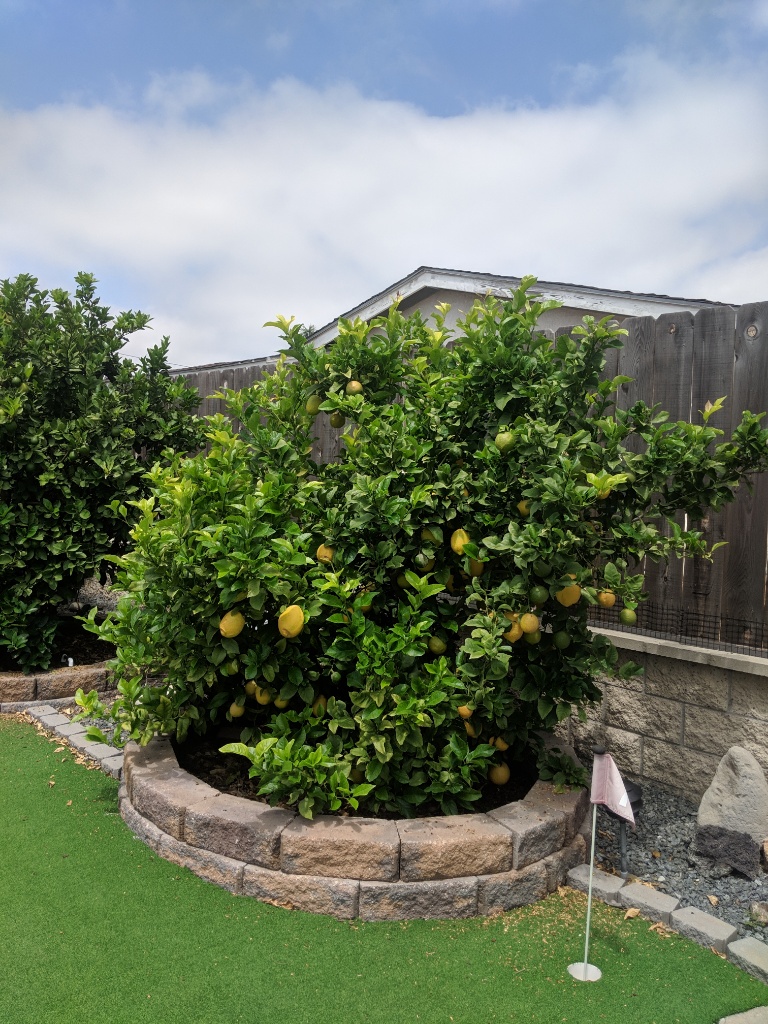 A friend gave me a Allen Eureka Lemon tree, and some lemons from his eureka tree have seeds.

Is there different type of eurekas lemon?

A friend gave me a Allen Eureka Lemon tree, and some lemons from his eureka tree. Lemons have seeds in it.

True Eureka is seedless, although occasionally you might find one or two seeds in a fruit.

Eureka Lemon is a seedless cultivar of Lisbon – and my favorite. I do not care for Meyer Lemon and in my very opinionated point of view those who like it are victims of a well crafted marketing campaign by the patent-holders, including recipies et al. I can further relate that the New York Culinary Institute rejects the idea of using Meyer Lemon for any purpose (one of my daughters is a recent graduate). So anyway, I’ve had a Eureka Lemon in a 24" box container for about the last 3 years – and …

I’ve been growing citrus in the ground here but have to cover in winter. For 2 years now my Meyer bloomed like mad but ever fruitlet fell off. I’m going to yank it up and put my 9 year old Lisbon seedling in it’s place. It finally started fruit at 7 and makes a nice flavorful tart lemon.

First full year for our Eureka, can’t believe the size of these lemons and barely a single blemish on any of them… 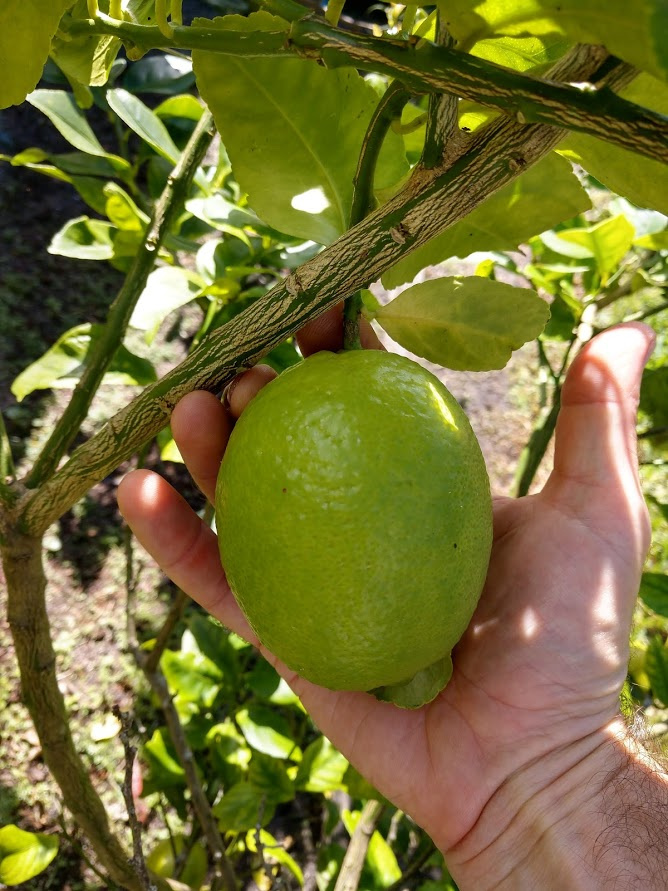 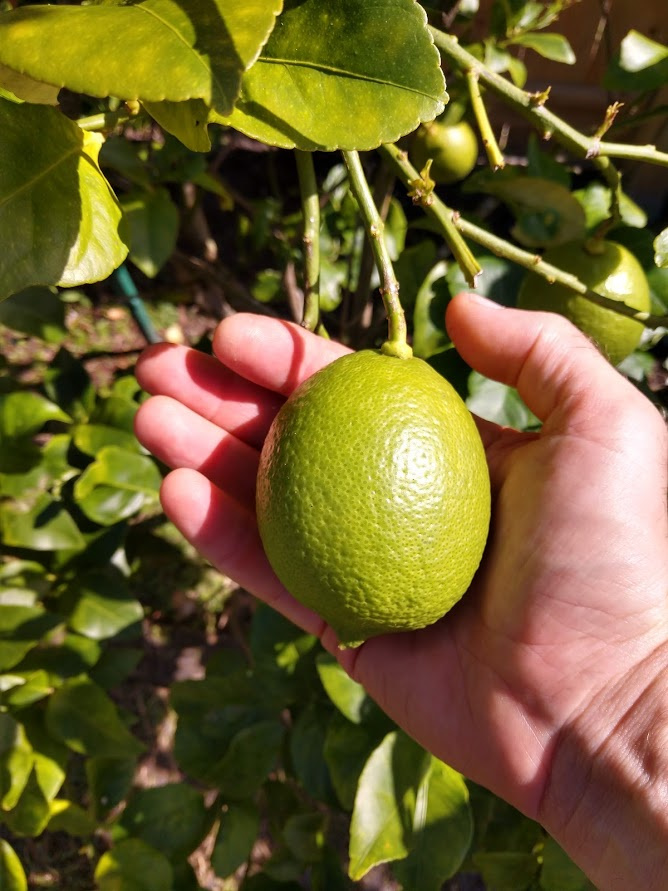 After pruning today. The cuttings filled up the barrel on the right. 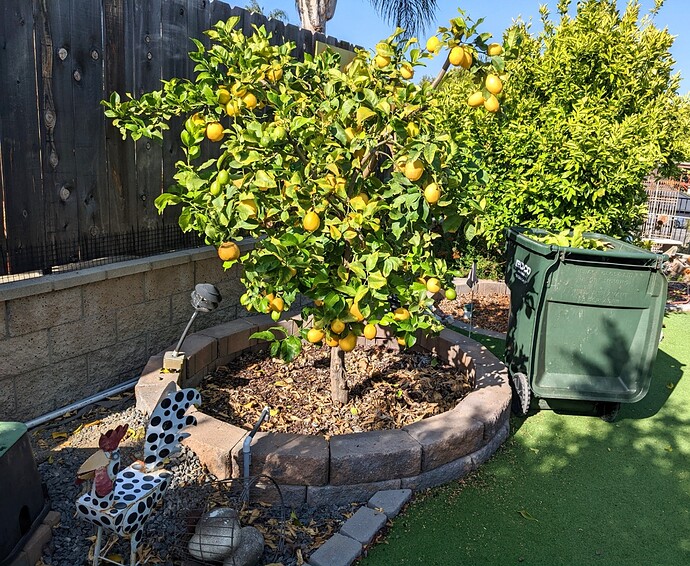 What are you doing for water? Did they implement a 55 gallon daily maximum in some parts of California as they discussed? That’s a beautiful tree! https://gvwire.com/2021/01/31/despite-rainfall-state-still-aiming-for-55-gallon-per-person-water-conservation-target/ . That’s still plenty of water if its used twice as Grey water. It’s very tight on water considering appliances use a lot. Hoping you all get bigger desalination plants soon!

What are you doing for water?

I am watering once per week in the absence of rain, which is about 8 months (not contiguous) per year.

Did they implement a 55 gallon daily maximum in some parts of California as they discussed?

San Diego county is in a better water situation than many other counties in the state.

That’s still plenty of water if its used twice as Grey water.

In the suburban setting, gray water is a waste of money and environmental hazard promoted by zealous contractors. In fact if everyone did it the sewer utilities would have to pump water down their neighborhood pipes. An efficient washing machine (and dishwasher if you use one) are far more economical.

Hoping you all get bigger desalination plants soon!

Desalination is a horrible way to increase water supply. Recycling municipal waste water instead of sending it out to sea is a far better solution all the way around. Orange county CA and other US locales are excellent examples.

Was watching a special and they said many locations California included that desalination was the only option. They don’t always tell us the truth in the Midwest about things. They said the Colorado did not have enough water and the reservoir was critically low. We have no idea other than what we are told. We here desalination is hard on ocean life as well according to some sources. The waste salt levels are to high for safe levels.

Politicians often avoid mentioning the sewer word because much of the electorate is squeemish about it. If they understood that the treated water is piped back to the origin of their current water supply and then treated once more with the water out of the canal, aquifer, lake, or whatever - they might start to think differently. 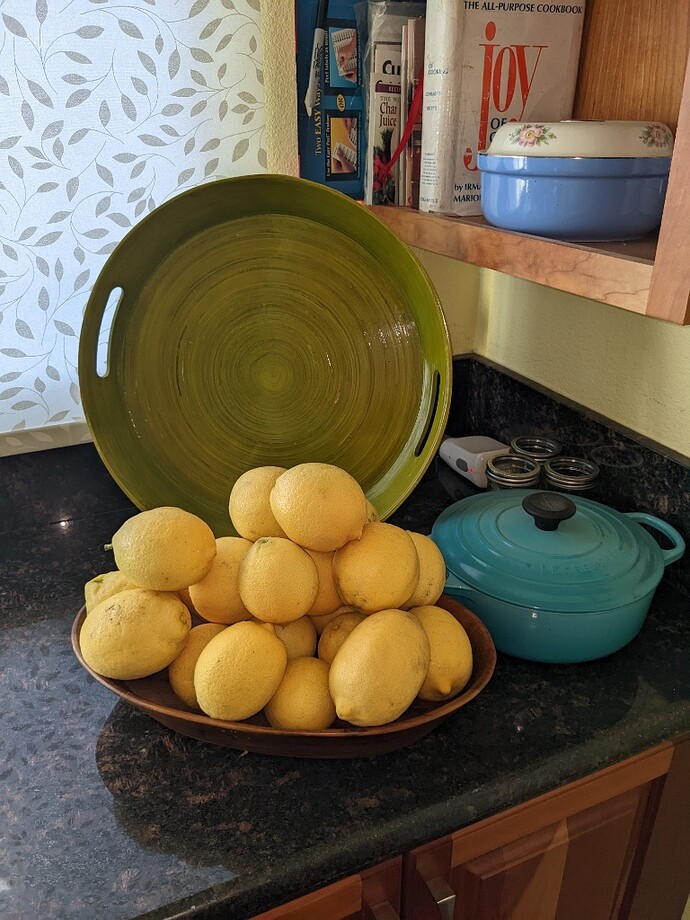 I have all 3 variety of lemons, I just bought when they were cheap, all from Costco.

Lemons and their hybrids

I only have Lisbon, Eureka, and Meyer. I love all 3 varieties.

Lemons aren’t safe around Janet. Here’s what happened to the plateful above. 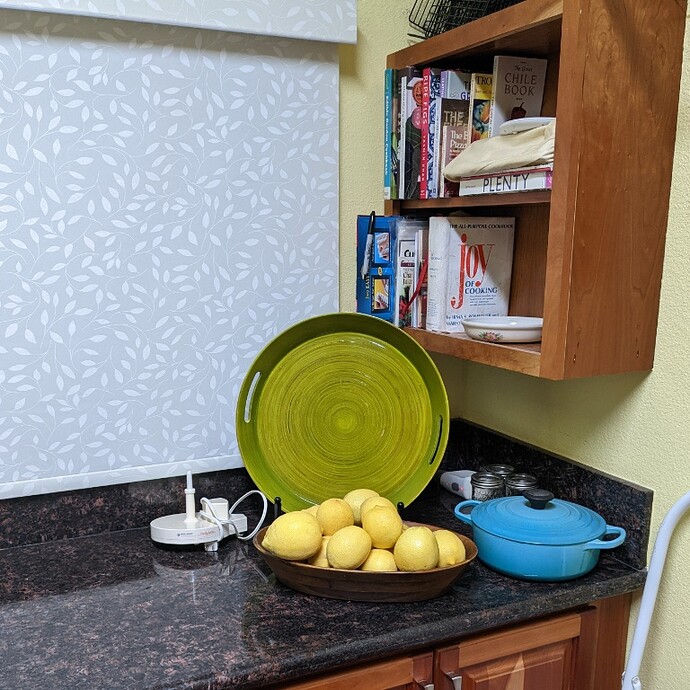 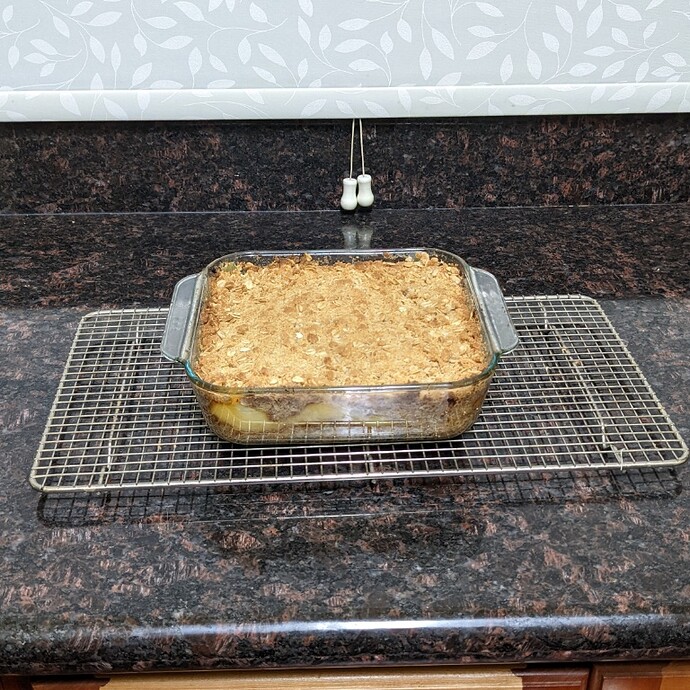 What dessert is that? I can’t tell…A lemon cobbler?