I’ve got a few dozen seedling black walnut trees established between 15 and 20 years ago that have a decent crop of nuts this year. Black walnut will often bear at 4 to 6 years old if grown on a good location, but the early crops don’t really tell the story of nut quality due to effects from young trees. When the tree is large enough to carry a heavy load of walnuts, it can be evaluated with reasonable accuracy. These trees are old enough and had a decent crop of nuts. The seed source for these trees were mostly from nuts purchased from Gerald Gardner between 1999 and 2003.

So what do I have to report? So far, of 6 trees tested, 5 are no better than average seedlings. That leaves one tree that is a pretty good walnut. It produced a very good crop of nuts this year. They are still too wet to shell but from test cracking a nut, I can see it is going to have a large light golden kernel in a fairly thick shell. I think it will be at least as good as Neel #1, perhaps just a tad better. I’ll post more here in 2 or 3 weeks when I have enough dry nuts to get the percent kernel.

Can’t you take a nut and remove the outer cover and place it in front of a fan or air conditioner…and crack it in 3 to 5 days rather than 3 to 5 weeks?
(I can and did yesterday.) Small tree in a yard…small nuts…but the kernel is very nice and a good % of the total of the nut. So, I collected half a bushel.

I could dry them faster, but I’m not in a rush. Besides, fast drying often makes the shell split at the suture. That lets fungi get in to attack the kernel.

Update that I sampled a nut from another tree a few minutes ago that is maybe double the kernel weight of a typical wild walnut and has decent flavor. It won’t hold up in comparison to the best selections like Thomas and Neel #1. I may keep the tree around but would not consider releasing it. This is typical of nut evaluations I’ve done in the past. When it comes to seedlings, they rarely exceed performance of highly selected parents. When they do, they may still not be good enough to consider propagating.

I’ll give an example where this should be considered. Surprise is a walnut variety released about 30 or so years ago after being found in a row of seedling walnuts. Surprise is fairly decent, but it was not until I saw producing trees in 2003 that I found its flaw. It tends to produce 10% pops every year. That may not sound like much, but it takes the variety from one of the top 10 producers to maybe one of the top 100 producers. I still have a few Surprise grafted, but I would not propagate them for nut production in my climate.

To me a black that is easy to get the meat out of would be high value along with taste. Blacks grow wild everywhere here, but nobody wants to fight with them. If you are growing to sell them, I would consider the shelling as well as taste.

I have a list of about 50 items to evaluate a walnut but all of them can be summarized as:

So for example, I would evaluate a kernel to determine how much it shriveled after drying. A shriveled kernel is not as valuable as an unshriveled kernel. A thinner shelled nut - all else being equal - is of more value than a thick shelled nut. A nut that is easily cracked and shelled has more value than a nut with bound kernels. A tree that consistently produces a heavy crop of nuts every year is more valuable than a similar but light cropper.

I have a row of seedling BWs, planted in a CRP riparian bufferstrip area, adjacent to the creek here…planted in 2000 as 2-yr old seedlings, grown from nuts I brought home from a KyNGA meeting and some Emma Kay nuts I bought from Gerald Gardner. I’ve not evaluated them in-depth… the nuts mostly go unharvested - but I did gather some from all that were bearing 2 or 3 years ago. Have not found one that is as good as any of their named-variety parents… not sure many are any better than any local ‘wild’ natives, though some are significantly larger than many local natives.

I’m of the opinion Emma K should not be propagated. It is very difficult to get the nut out of the hull. In addition, the kernel darkens very rapidly. The best parents I’ve found in order are Thomas, Neel #1, and Farrington. This is specific to my climate so don’t read too much into it.

I have a Thomas seedling that is every bit as good as the parent. That does not mean it is worth propagating, but it says something about Thomas producing fairly good seedlings.

I saw some 3-4 foot grafted Sauber (black) that had a few nuts on them earlier this year. Fastest I have ever seen a crop. Didn’t buy one so don’t know if they are any good though. I prefer the buttery taste of whites and heartnuts.

Sauber #1 is a fairly decent walnut. It is not one of my preferred varieties mostly because of size and climate adaptation. It is a better performer in Kentucky.

Seedling Black Walnut typically produces first nuts at 4 or 5 years old given that the trees are properly taken care of. This is dramatically different from pecan which can take 15 to 20 years. The problem with evaluating the early produced nuts is that they are often larger or better filled than when the tree is older and has a full crop of nuts. Football II is a good example of a tree that produces and performs very well as a young tree but as it gets older tends to overbear which reduces nut quality.

I took a trip on the Natchez trace today just enjoying the cool sunny fall weather and looking at the leaf colors. I made several stops along the way and picked up walnuts from about 30 trees. Most were pretty much typical seedling walnuts with some that were totally worthless and maybe a dozen trees that were good enough to pick up and crack. Of the dozen good trees, one was very unusual. It has kernels that are twice as large as any wild walnut I’ve ever seen. I have Farrington which to me is a very large walnut. This walnut is just as large as Farrington and maybe a tiny bit larger. I gathered half a dozen nuts to bring home. They need to dry for at least 3 weeks before I can evaluate them properly. Presuming they are reasonably easy to crack, I will still have to check the tree to see if it is productive enough to be worth propagating.

This link shows a google maps picture of the tree which is about 50 feet to the right of the person standing back near the branch in this picture. https://goo.gl/maps/gHq59kVzKshw4hNPA

Walnuts.
The best tree I’ve sampled this year (big nuts and light tasty kernels) has been inferior in recent years.

And one I park under has very small nuts but they are as good as you’ll find.

Tried nuts this evening from three other sources…having dried them 10 to 13 days in front of a fan…all good.

A fine year for seedling nuts of various sorts.

Plan to harvest a bushel or more tomorrow. They’ll be tasty in cold spells.

Here is a picture of some walnuts to show the difference between typical native seedlings and selected varieties. The nickel is for scale and the nuts are arranged in counter-clockwise order.

I will crack these in a couple of weeks and post a picture to show what they produce when cracked. 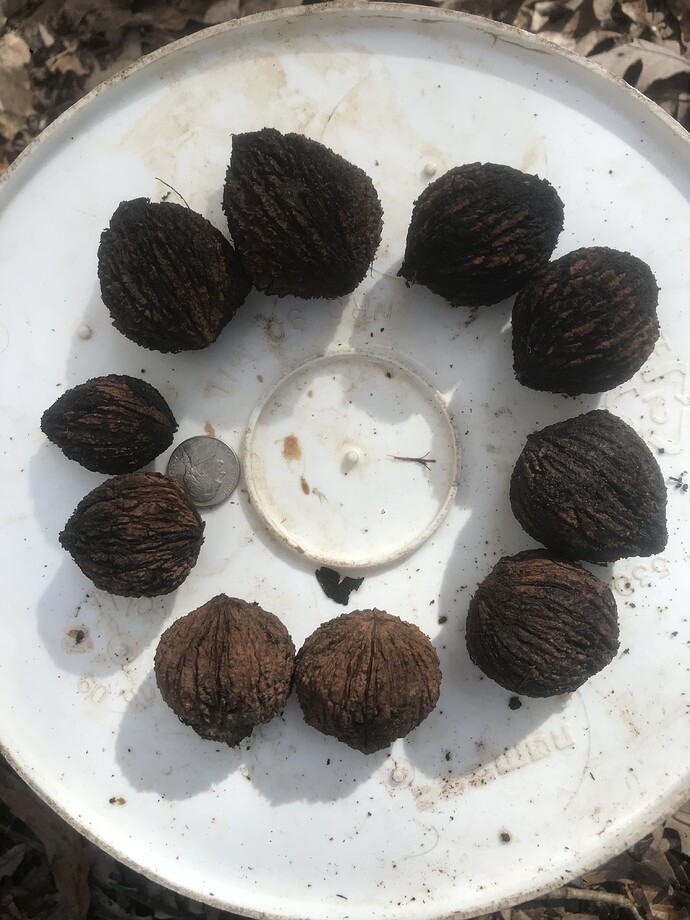 Here is a photo of the nuts above cracked. From top to bottom:

If I were picking a tree to propagate, the Thomas seedling is the best of this bunch and the Burns Branch tree would be second. 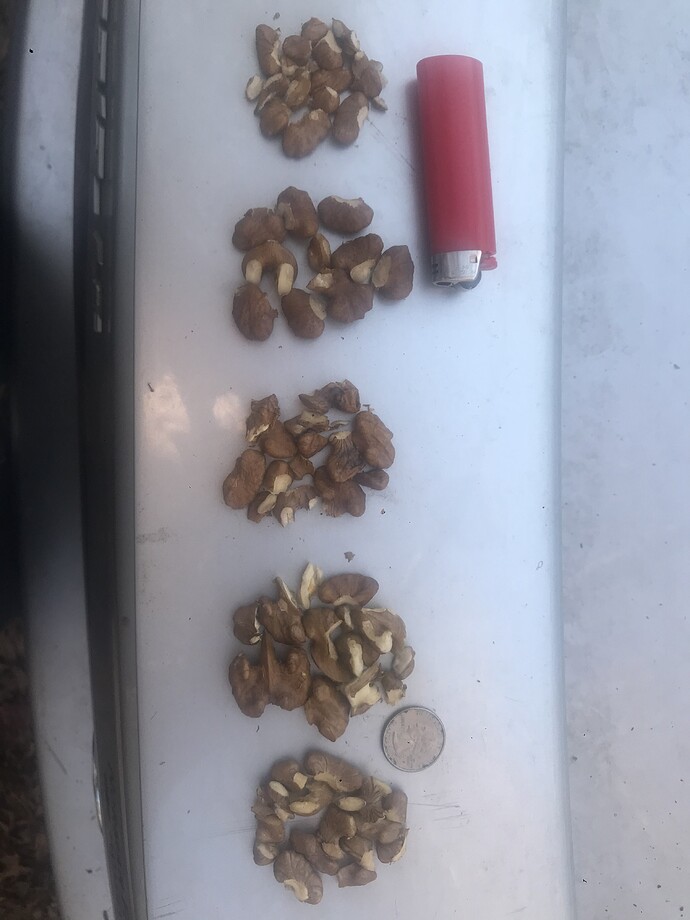 I ‘evaluate’ seedlings by collecting half a dozen and drying them…for sampling the harvest before collecting a larger quantity of them.

But, if I’m going to use them for planting, I’d rather have a ‘track record’ for not every seedling produces good nuts every season…and other trees do.

Have you thought about joining Kentucky Nut Growers?

I’ve found 4 or 5 native seedlings that were much better than average. One of them was unusual for producing good nuts and exceptional rootstock. The ortet was cut down about 10 years ago when the road was widened. Fortunately, I had 2 grafted trees from it by that time. Of the others, one is exceptionally productive but tends to alternate bear. One makes good nuts, but the tree is competing with a forest which means it makes nuts only at the top of the canopy. As above, the Burns Branch tree makes nice large nuts, but I want to find out how productive it is before deciding to collect scionwood. Typical seedlings make 15% to 20% kernel. Thomas makes 22% and the seedling from Thomas shown above runs about the same.

That Burns got that elongated tip and lemon shape of shell. Nuts you guys find that have husks that come to a tip like this and the nut inside generally “I guess” have a lot of appeal to people cracking black walnuts for further propagation or forage. 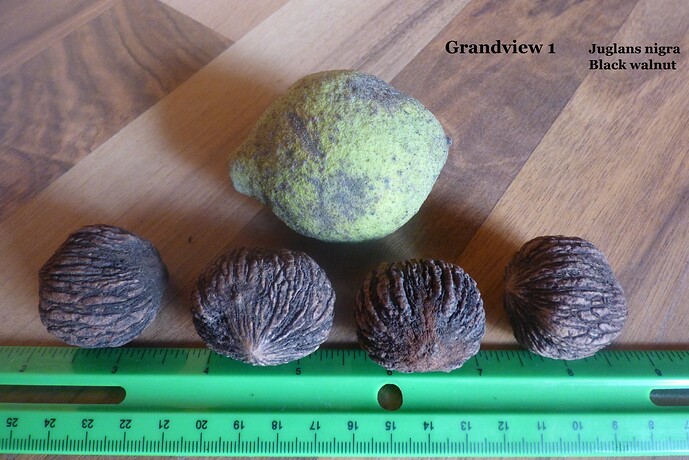 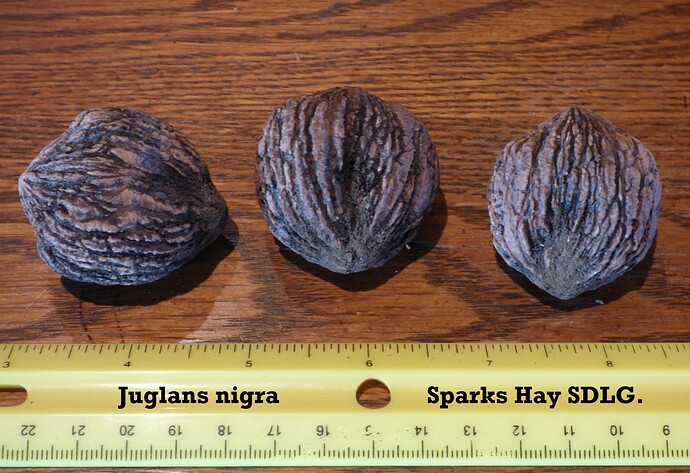 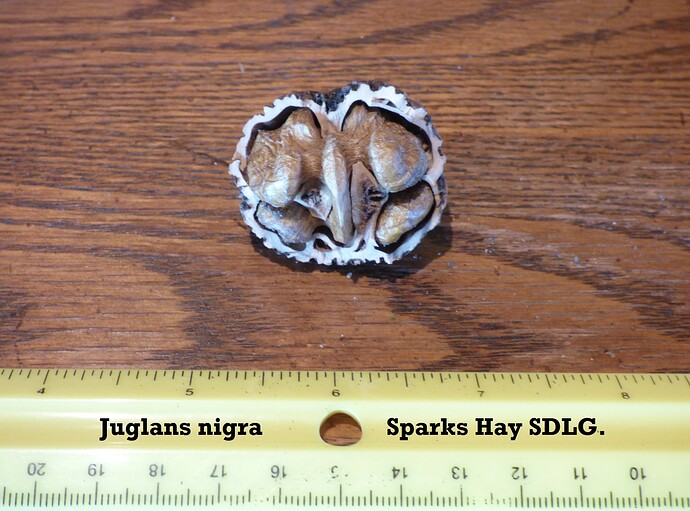 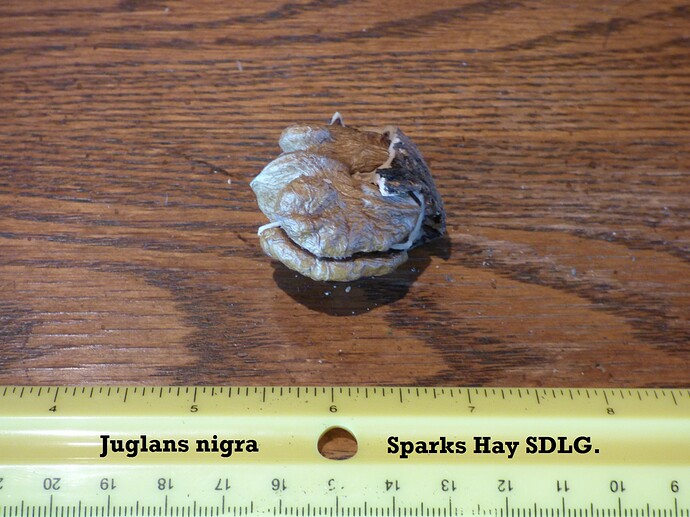 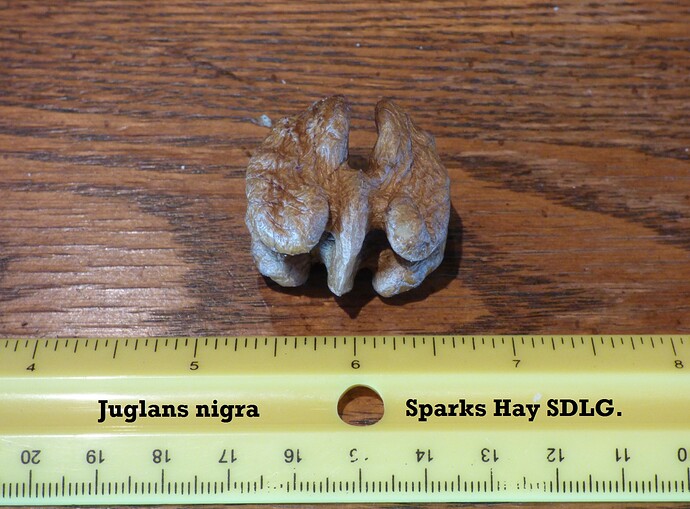 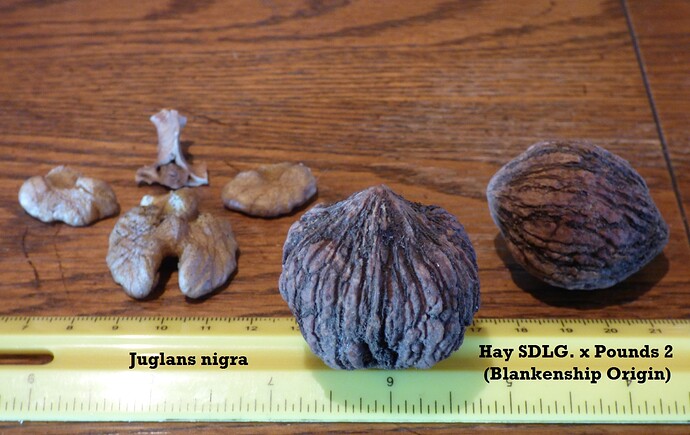 Just as Darrel said, these are the reasons to graft . . . 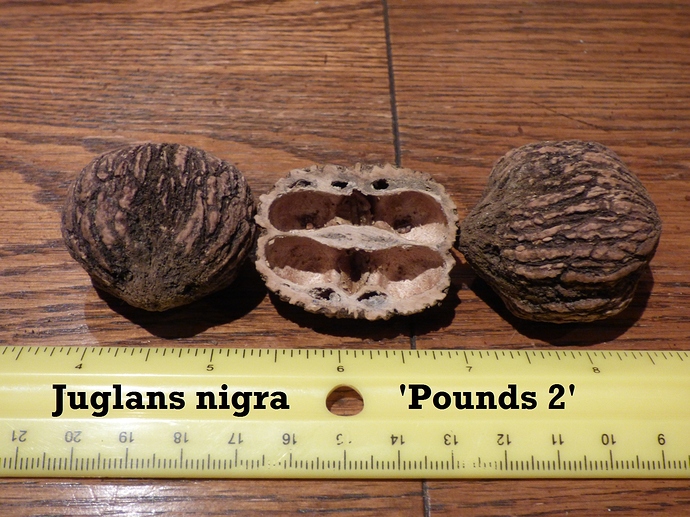 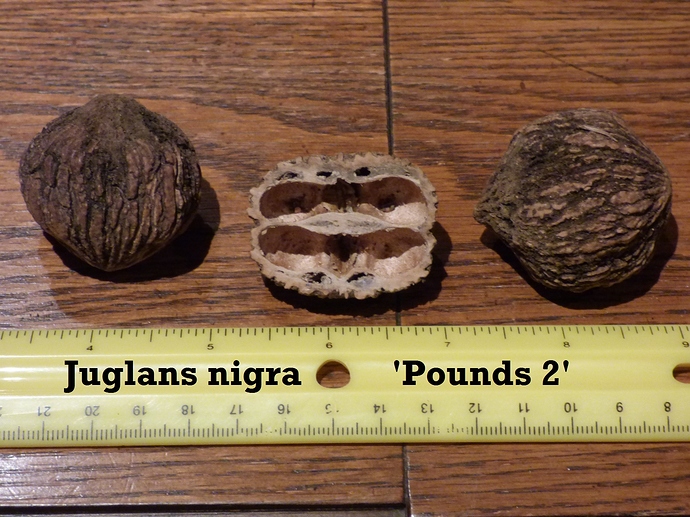 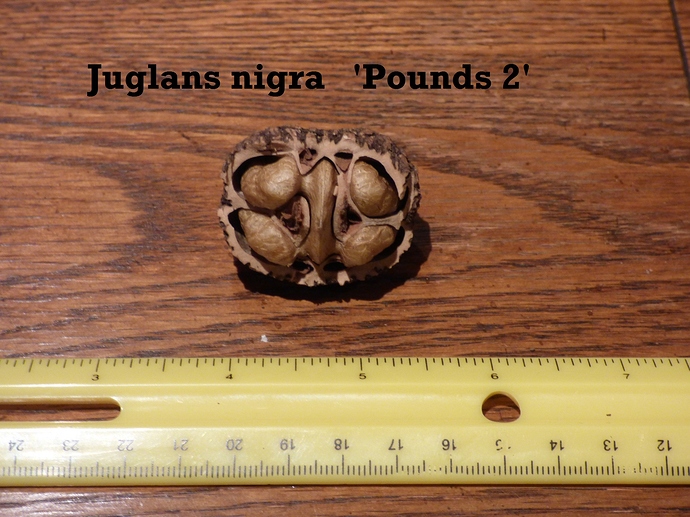 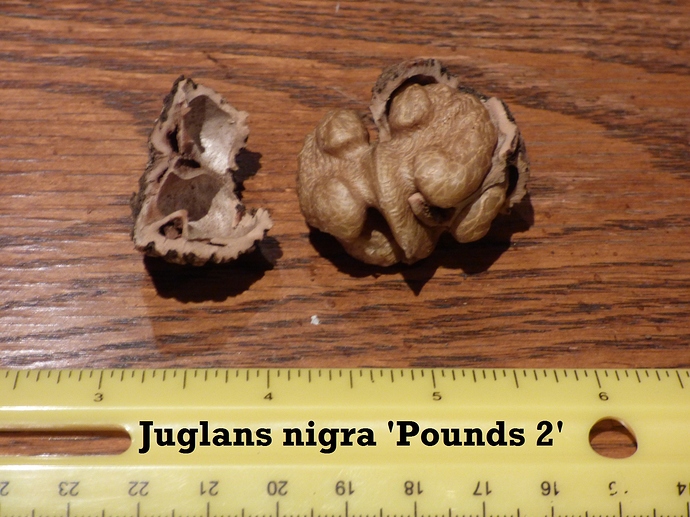 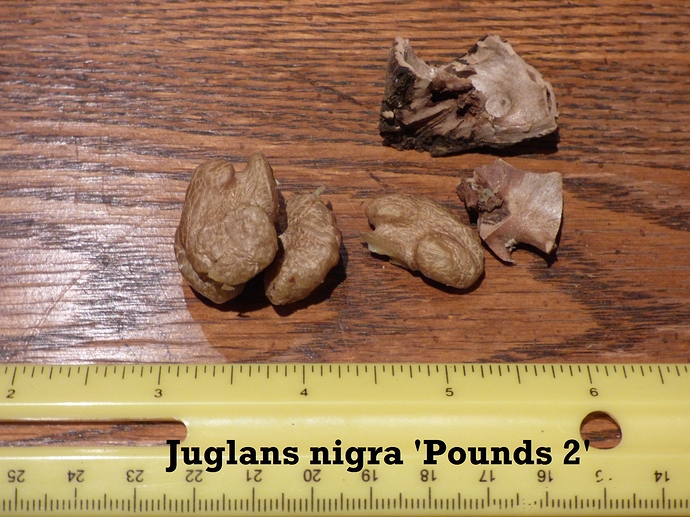 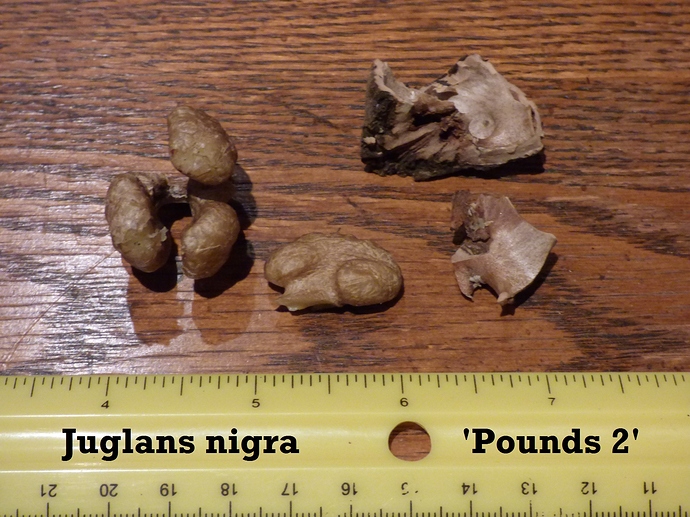 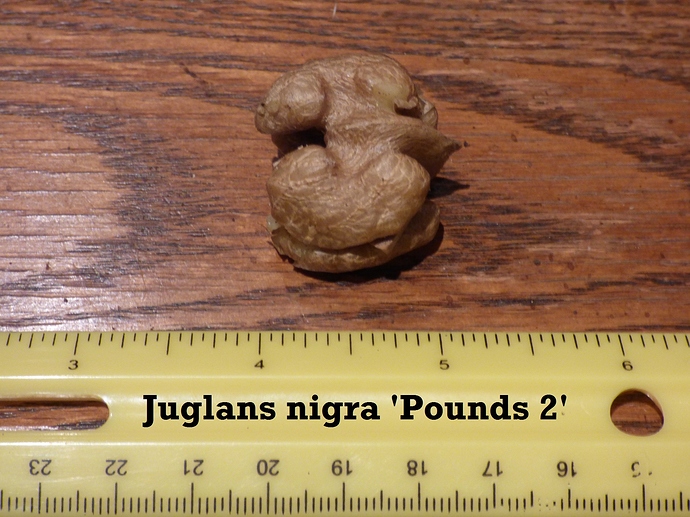 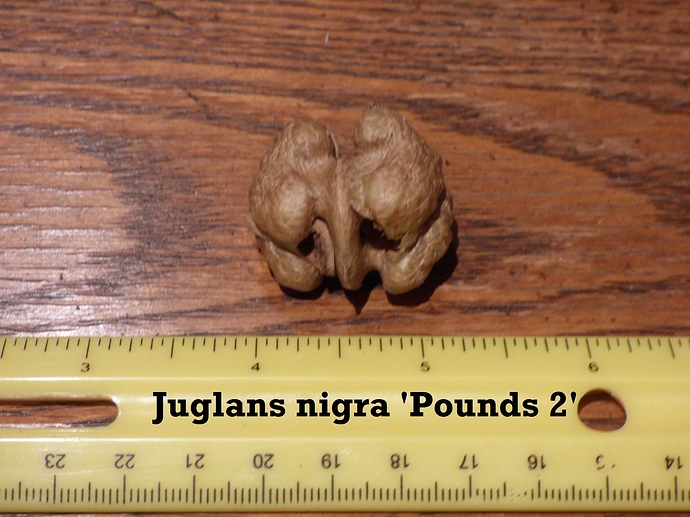 Nuts were cracked using Fred Blankenship’s ‘Mr. Hickory Nutcracker’. He builds them one at a time and when he starts building them again may be, soon . . . 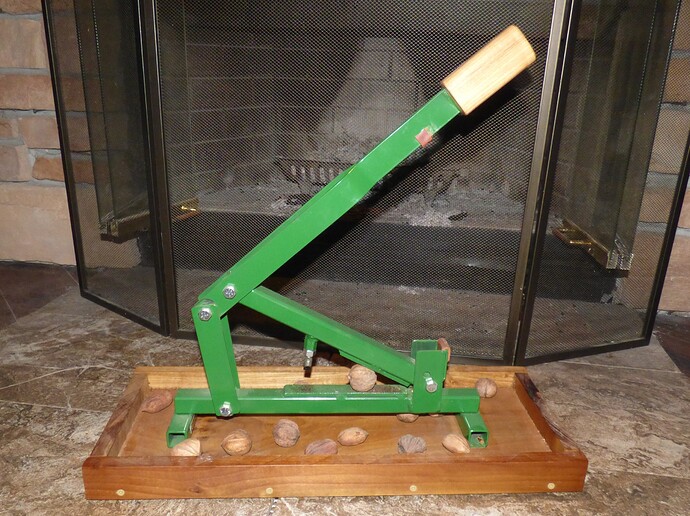 I have 20 year old trees of Hay Seedling and Pounds #2. While crackability is good, Hay Seedling is not IMO productive enough to make it as a commercial tree. Pounds #2 is slightly more productive, but still not up to snuff. Both are good walnuts, just come up short for production. I should probably rank this in a way to make sense. Bowser is an extreme low producer making about 1/6 as much as a Thomas tree of the same age and size. Hay Seedling makes about 1/2 as much as Thomas. Pounds #2 makes about 2/3 as much. This is in my climate and with my soil conditions. Either would be a good yard tree. I just wouldn’t plant them in a commercial operation.

Since you are likely to ask, I got both Hay Seedling and Pounds #2 from Fred Blankenship. I met him at the KY nut growers meeting back about 2002 or 2003 and had talked to him on the phone for about 3 years before that.

While I’m thinking about it, did anyone show you how to use the cutter stub on Fred’s cracker? I was amazed when it was demonstrated cracking Stoker walnuts. Properly used, it will turn out 1/4’s almost every time.

I have access to a tree that has probably a bushel if hulled…tree is about thick as a pint jar…
nuts are flattened and large (not pointed end to end),
but the kernels vary in quality even though large and easy to crack.
Maybe it’s just a youthful tree…for it’s mother had smaller nuts, but consistently good.