I though I might have lost the Giant Russian. Put it on G890 and G202 last spring. The 202 failed after initially putting out a leaf or two. The G890 seemed in doubt.

But, this year, the leader and two side buds have over 6 inches new growth…so we should be good to go. And next year I’ll have extra scion wood to put on a ‘frankentree’ or something.

I didn’t buy or trade for any extra red fleshed this spring…unless a KAZ 96 3-15 is red fleshed. But have grafted 99 apple grafts this spring, and somewhere between 78 and 96 will be successful…3 have died, 78 have made it, others are pending.

So far I have a few red fleshed apples grafted and they seem to be taking, props to @BlueBerry for the help!

Varieties are Redfield, Niedzwetzkana, Red Merylinn and Veralma. Excited to see how these do and also excited to see if I can add more next year!

Hi Poncho…I have ‘Red Merylinn’ from two different sources. Would hope they are the same.

The one your scion came from apparently is dying, not sure why, pruned it too hard maybe.
Might want a twig back someday

But I’ve seen no blooms nor truit from this variety.

I just mention I have 2 points of origin…and the leaves didn’t appear quite identical. There should be some red veining in leaves that are mostly green after a few weeks old. (At least there is on my other ‘Red Merylinn’.)

Happily you sound like you’re off to a good start!

(ps) Redfield, Veralma Simontornyai, and Niedzwetzkyana sure do look glorious when in full bloom! (As does Odysso…which I can perhaps snip some on next year…as I have 6 copies of it…from three sources…no one died from the same source as this apparently dead Red Merylinn).

I sure hope that I can keep all of my grafts alive long enough to get them in the ground and start growing well. Hoping to plant them all in the Fall and next Spring will for sure tell me what all has made it.

Redfield, Veralma Simontornyai, and Niedzwetzkyana are all looking great but just checking on the Red Merylinn yesterday evening and unfortunately it isn’t looking as good

I will keep it there and treat it as the rest of the grafts but not sure it is going to take (or maybe has already failed) Also not sure I had enough of it but to make the one graft… I need to check and see if I grafted it anywhere else. 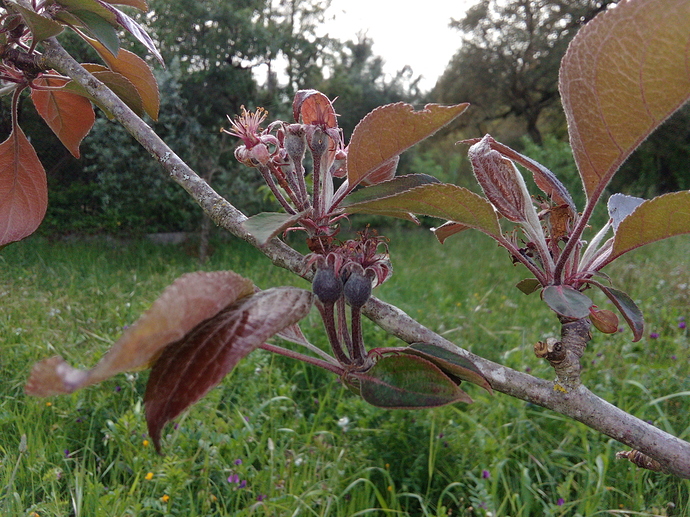 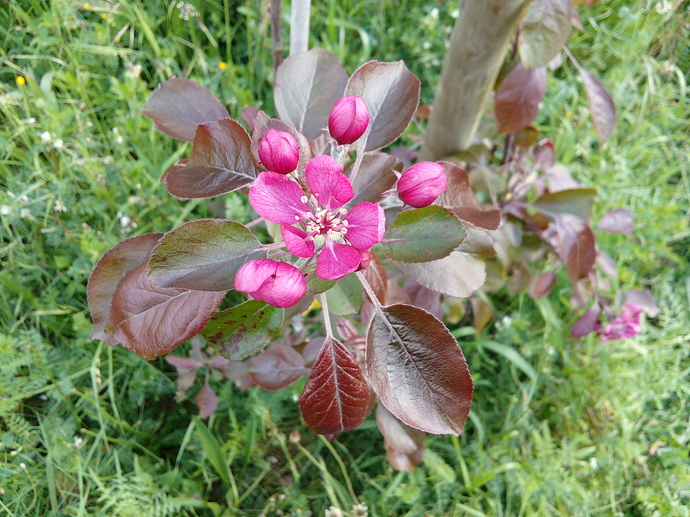 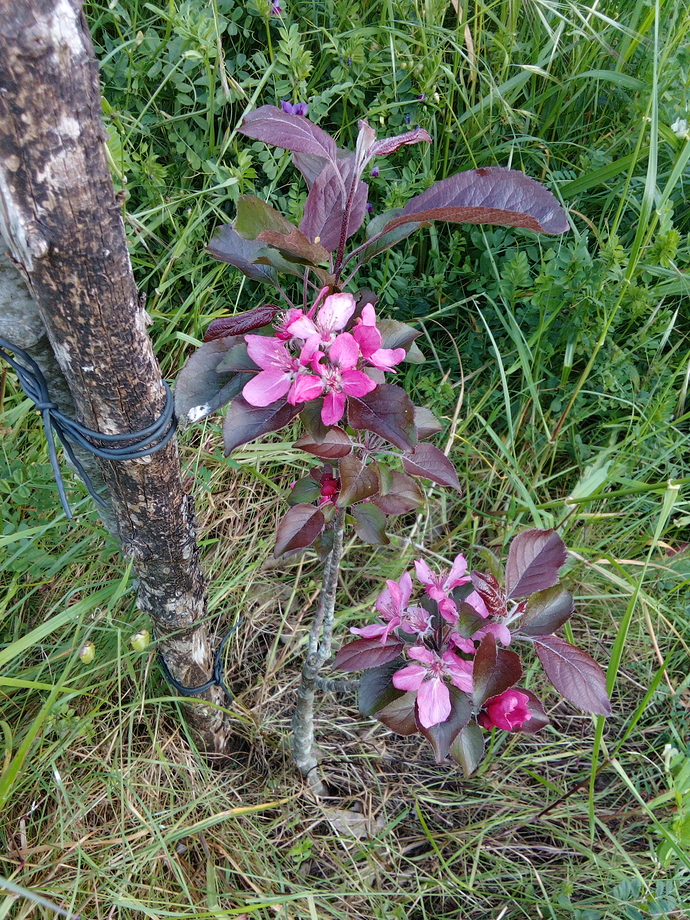 Thank you my friend!

I grow that one, it is not bad, should have a pretty good crop this year as it bloomed early before the hard freeze and the fruit set

As I told you previously, Winekist, Bellflower and Keepsake did well for me.

What other red fleshed apples are you growing besides Winekist?

I have several Winekist, Red Vein and Redfield in my new orchard. The Redfields were either grafted this year or purchased. The Winekist and Red Vein were grafted to B118 and have been hit-or-miss. Some look great, some have no vigor. Hoping the runty ones perk up this year, all my red fleshed have leafed out now and will hopefully put on good growth.

The Red Veins are already blooming, they’re such incredible blossoms. The Redfields are about to start blooming, not sure if they’re as spectacular… I’ll find out

I’ll have to say, Redfield bloomed first time on M111 for me, and I was very impressed.
Was prettier than Niedzwetzkyana in bloom. Will hope to sample it this year, as I have thinning to do unless the weather thins for me.

I assumed things bloomed earlier for you than here in KY. I guess not. 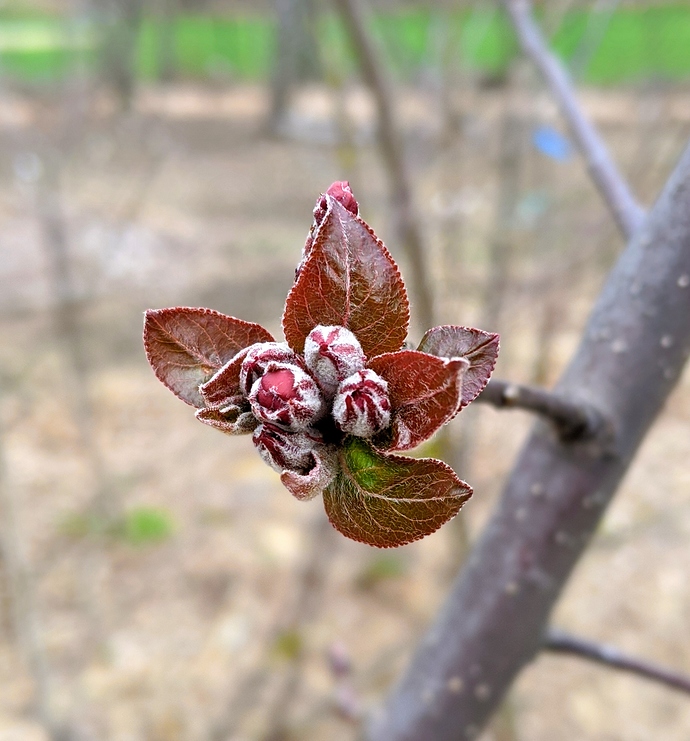 It all depends. We had some warm days in March and February, but it wasn’t very warm here until just recently. Now all the plants are cooking in the sun…

I have a new Winekist graft, and a few others, with 8 to 10inches of new growth.

Update…the Redfield loaded with blooms 15 days ago…didn’t come through the freeze two weeks ago very well. “Maybe” there is one fruitlet going to make it. Too bad.

There’s next year I reckon.

(Anoka, Braeburn, Fuji, Granny Smith and “not Macintosh” all have a few surviving fruits, but not many. These are 29, 30 year old trees.)

Too bad about your Redfield. Maybe you could try it against a white wall to pick up light & heat. Out my way light is no problem. At least halfway through the flesh Redfield is deeply red. Love it.

Yeah, my place is somewhat frost free on the average spring morning…but when it gets into the 20’s and they are in full bloom, what can you do?

If the fruits are big/juicy, might be worth saving, even if not very tasty. Also, if it is healthy and not prone to scab, CAR, etc?

I am looking for more red fleshed ‘candidates’ to try and cross and get a better apple.
I know the Niedzwetzkyana isn’t an apple anybody would carry around to snack on regularly!
But, someday there will be such a red fleshed apple.

The health-conscious folk will ‘eat them up’ if we ever get a good tasting red fleshed apple.
Hoping I already have one or two out of the 30 I have that I’ll like when they all produce fruit.
But, I’m glad to get scions of new ones to try.