What are your favorite Dave Wilson Nursery retail variety of peaches? I’m thoroughly disheartened by the ongoing lists of excellent peaches that us Californians don’t have any way to access (e.g. Winblo, Ernie’s Choice, Foster, Glenglo, etc etc etc.) I’m hoping to find some peach varieties that I can actually acquire that are vetted by forum members. I don’t really trust the DWN ratings, it seems like every single fruit is a “taste test winner”. Nectarines aren’t an option for me due to brown rot, it’s ruining my life.

Well Zaiger didn’t create it, but DWN sells Indian Free, for sure my favorite. Although I have not tasted that many. Red Baron is reported to be extremely ornamental with the double red flowers, and produces a good peach too.
Bay Laurel sells them and also has Loring, O’Henry, Redhaven, and Rio Oso Gem. All winners. Well winners here, in CA I think Rio Oso Gem have proven to be good there. If you have brown rot problems, skip Indian Free.

For me it’s a tie between Mid-Pride, Eva’s Pride, and old-fashion Saturn (not the donut Saturn).

Indian Free is actually my favorite too. Never had it get brown rot, I would assume because it’s so late in the season. I lost almost all of my nectarines this year to brown rot, and Indian Free went unscathed. It sounds like our tastes are similar, I’ll definitely check out the ones you recommended!

@Richard Thank you for the recommendations. I know you’ve been in this business/hobby a long time, so I definitely value your feedback!

I have had very good luck with Red Baron, Rio Oso Gem, Indian Free, O’Henry, Gold Dust, and Baby Crawford from the DWN lists. They are all relatively OK for rot except for Indian Free.

Loring, Redhaven, Sugar May, White Lady, Canadian Harmony, and Arctic Glo (nect) are all top notch in the taste department, in my opinion.

I’ve only got 2 fruits from my Baby Crawford tree so far, but they tasted good too.

Man now I want more trees! Oh well, at least I have some trees!
I too don’t really have rot problems. My Indian Free fruits look great! I quit spraying in July too.My fruits are at last starting to swell. I have been reporting mine ripened October 3rd, I was wrong I just looked at my notes, October 12th! Wow that is late for here! October 15th is usually the first frost date. Well it works, and is a super late peach, now if only I could add some listed to fill out the season! I need early actually and know what I need, just no room. One day I hope to move to a bigger yard.

Why are you letting brown rot ruin your life? Monterey Fungus Fighter is the reliable life raft at your immediate disposal. Try it a month before the fruit ripens and there will be virtually no active fungicide on your fruit at harvest. I have sound Indian Free fruit not ripe yet that I haven’t sprayed for 2 months and don’t plan to. It’s too late for it to likely rot now.

Snow Beauty is excellent for me. Unless you hate white peaches.

This was the first year I sprayed it, and it had no discernible effect. I don’t know if I mixed it incorrectly (I don’t think I did) or maybe didn’t apply it liberally enough, but it spread like wildfire.

I have Eva’s pride and love it! Red Barron has beautiful flowers but there’s a hint of almost bitterness near the skin that I don’t enjoy. Thinking about replacing it.

Right now just looking at the list of trees with two or more recommendations that I don’t have already I come up with:

For peaches that are listed as “firm when ripe” they can just be left on the counter to soften a bit, right? I’ve always avoided peaches listed as “firm” I think I’ve mistakenly equated “firm” with “crisp/crunchy” (which I wouldn’t like in a peach).

Try focusing on recommendations from locations that match your climate.

Andy Mariani has an all-star selection of peaches for California coastal valleys which should generally be a good one for your location, as well. Most (other than varieties that cannot be propagated without authorization) should be available at CRFG scion exchanges.

Andy Mariani has an all-star selection of peaches

Which have you grown?

Even if your times vary in your area, All would vary, since these are times for one location.
Wow, Ryan I would say you nailed it!
I can’t say all will work in your area, and you may have to replace some, all have great fruit, great potential, a good start for sure.

I can tell you that, as grown near the Maryland/PA border, the Loring peach will soften after counter-ripening to achieve what I consider a perfect “melting” flesh texture.

When Loring is at its best, it is among the very best peaches. A few Augusts ago, I clicked this photo of some sliced Loring (right) and Blushingstar (left). 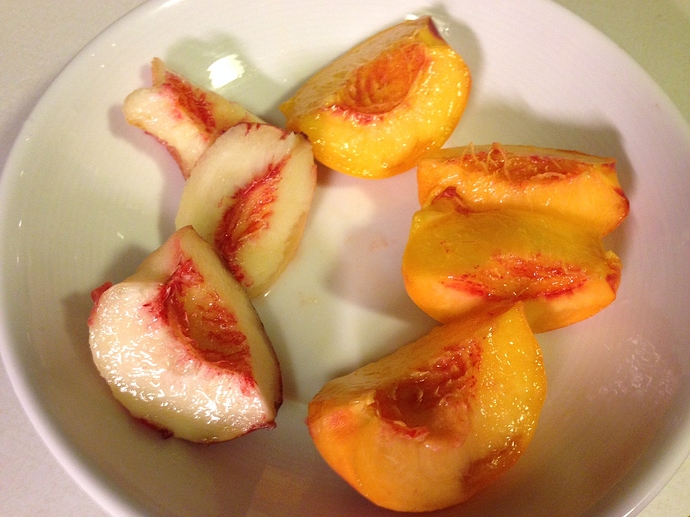 These peaches were luscious, and their memory continues to haunt my wildest fantasies.

Post-script. In this climate, Loring often ripens in mid to late August.

@alan, is MFF equally effective for nectarines? I haven’t tried growing them yet but I’d like to graft some next spring. I’ve heard that nectarines are often more prone to rot than peaches.

I use MFF and Bonide’s Fruit and Plant Guard. Which attacks using a different mode of action then MFF, so you have two battle fronts against the fungus. I alternate applications. Worked great for my nectarines. 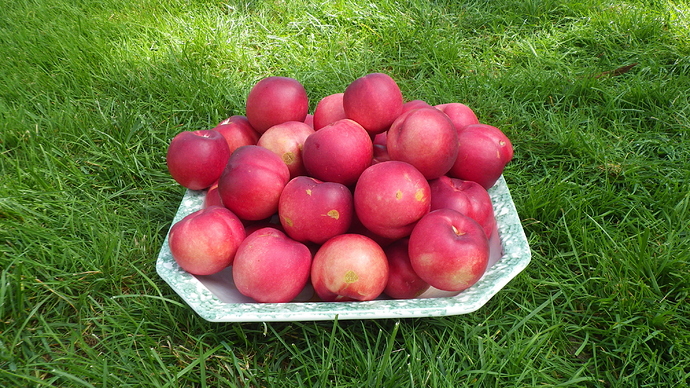 Have you had a lot of rain this summer?

I had spot worse then i’ve ever seen it t his year…even my container trees that usually are very clean had it bad. Hopefully we can have a more typical precip pattern in the years ahead.