Had about 15 flowers on each of my two feijoas last year, looks like I have my work cut out for me this year. 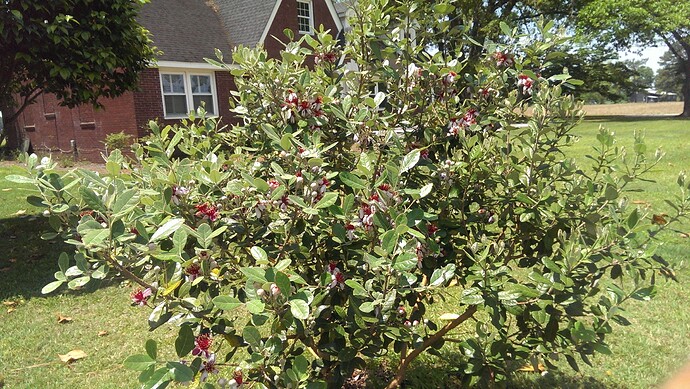 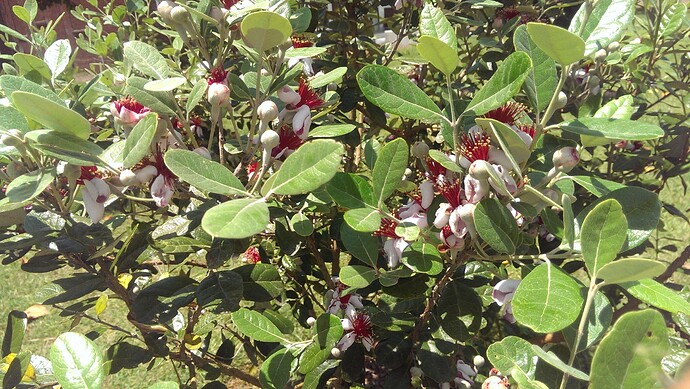 Why are you hand pollinating? Mine set fine without any assistance.

Why are you hand pollinating? Mine set fine without any assistance.

Truth be told I probably don’t need to. Last year I hand pollinated and only had 8 fruit, all on one plant and all on the same limb. I tend to have poor fruit set, jujube and pluot set very little fruit for me, I think its the humidity but not sure. Having said that a man in town has 2 large plants that set incredible amounts of fruit and I know he does nothing to them.

They have such pretty blossoms. I keep hoping mine will bloom, but nope. In any case, I think they are nice evergreen landscaping plants. Still, I’d like mine even more if there were blossoms and fruit! I hope you get loads off of yours this year.

How old are your bushes? I bought a one gallon plant from Edible Landscaping and then realized I needed a second so I ordered a small 2" pot from Florida Hill Nursery. That was 4 years ago and after 3 years both plants were the same size and both bloomed a little the 3rd year. The fruit was rather small but good, I hope the EL plant pictured above fruits this year and produces larger fruit than the FHN plant did last year. Maybe I should have gotten a grafted variety.

Just purchased last spring, but I can’t tell you the actual age. Current size is about 4’ wide X 3’ tall. Purchased from Stan McKenzie of McKenzie Farms over on Olanta Hwy near Scranton. His webpage has them listed as gal. pots, but this might have been a larger pot, since he doesn’t list everything online.

Have you ever purchased from him? He’s a good man, and knowledgeable. I turn to him when I need a citrus fix. His prices are much better and the plants are larger than I ever see in local nurseries, plus he carries more variety. I don’t mean to sound like an add, but this is a local farmer/nurseryman who I wholeheartedly support because he treats customers well and raises interesting products.

My wife would be so jealous if she saw your feijia trees. We have a few trees in Oregon but yet to have fruit, due both to the climate and younger trees. I have heard fruit set is better on known varieties than just seedlings. I have four seedlings and one coolidge. We had a mild winter so I’m hoping to have more blossoms this year, maybe…

Also, I think hand pollinating is the way to go, IMHO.

Have you ever purchased from him?

Yes I have bought a good bit of trees from him, good guy.

Have you been to the Riverbanks Zoo? They have fiejoa planted everywhere but I did not see any fruit, that was first part of July so the fruit may have been small and I could have overlooked them. They also have a large pawpaw there too along with nice green figs. The figs were ripe when I was there, wonder how they fared through the winter?

I have heard fruit set is better on known varieties than just seedlings. I have four seedlings and one coolidge.

I hope my EL tree is of better quality than the one from FHN, I should find out this year. My fruit was a little bigger than a hardy kiwi but did taste good. Depending on how this year goes I may get a known variety next year.

I[quote=“c5tiger, post:8, topic:1288”]
Have you been to the Riverbanks Zoo? They have feijoa planted everywhere
[/quote]

I don’t go as often now. I hadn’t even noticed them.

They probably fared fine through winter. Mine have no problem. Since the zoo/botanical garden is along the river and canal, their temperature changes tend to be moderated. They have some interesting things growing there.