Anyone else try growing ferns from spores? I have some royal fern (pictured) and cinnamon fern that I’ve had going since June, but they’re still in the green fuzz stage. If anyone else has experience, I’d love to hear how long it took them to get to prothalli or to plantable ferns. I’ll also post pictures periodically to help me track noteworthy developments. 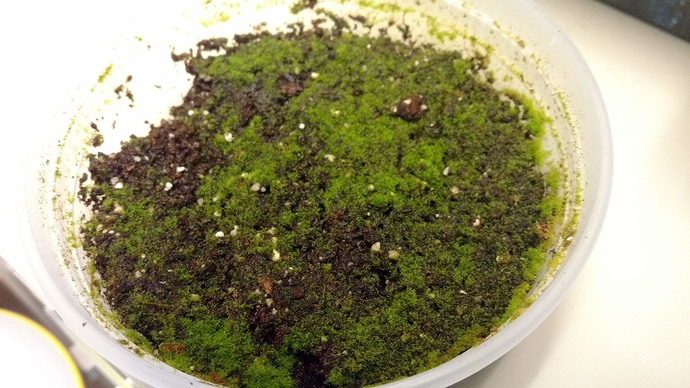 I’m interested to see how this goes. I’m in the process of starting a ostrich fern patch to grow my own fiddleheads. i have 4 i put in but want a lot more. the roots aren’t cheap and i don’t want to dig wild ones.

That’s one of my goals as well. From what I hear, though, they tend to spread if they’re happy and you shouldn’t have too much trouble building up a patch. I wanted to do some ostrich fern spores, but the patch I know of didn’t produce any fertile fronds this year.

i got a few on mine this summer. do you take them when green or wait till’ they brown? my plants are kind of spindly. i don’t think they get enough moisture or sun where they’re at. soils super rich there tho. i planted them in compost then mulched well with wood chips. theyve only been in one season so they may still take off.

There’s kind of a narrow window, different for every fern, but most of them ripen to a cinnamon color and start releasing spores. By the time it’s black, it’s definitely too late. I collect fronds that I think are ready and leave them in an envelope to dry, and the spores fall out naturally as it dries.

Also, Tennessee Wholesale Nursery has pretty good bulk pricing for bundles of 25 or 100. I’ve thought about it, but I don’t think I need that many…

Fiddlehead Ferns - Matteuccia struthiopteris Fiddlehead fern is native to northern woodlands where they grow near streams, rivers and other areas that feature moist soil. The ferns' delicate fronds, varied texture, and fiddle-shaped tops are...

I tried it when I was a kid does that count? All I did was scrape off the brown ones and put them in a clear cup with some moist soil that was sealed and left them. They got a couple inches tall and I think I accidentally let them dry out.

I’d say that counts! That’s basically the meeting I’m using. It sounds like you got farther along than I have so far.

I have grown ferns from spores a few times. The first few times were accidental in among carnivorous plants.

I have some royal fern (pictured)

Are you sure the picture is of fern prothallus? The ones I have grown look flat and fleshy, kind of like liverworts but more slimy. I am not familiar with royal fern, but have never seen fuzzy prothalli. Or are they just super young/tiny prothalli?

Yes, they are still young and fuzzy. They are taking their time getting to the classic heart shape. They better actually be the ferns, as I sterilized the medium before adding the spores. Time will tell, I guess. How long did it take to get to recognizable prothalli or fronds?

Ah that make sense. They are very uniform so makes sense to be the spores germinating.

I don’t check on mine often enough so never notice mine until they are already at the noticeable prothalli shape. From there it takes anywhere from a few weeks to three months to produce the first frond. It depends on the species, but the growing conditions certainly play a part. My maidenhair ferns only took about two weeks from prothallus to first fronds.

Some prothallus will only grow one fern, but others you can carefully remove a tiny fern and the prothallus generates another one.

Stag horn ferns take forever from spores and are a little trickier than most other ferns. A few years ago I grew some stag horns from spores, it took something like six months before they even produced prothalli! Each one produced half a dozen small ferns so the wait was worth it. I keep thinking I should do that again, but never get around to it.

Neat! Mine have already been 5 months at this point, but I think they’ve been slightly on the dry side and maybe not quite enough light. I’d added a little water and put them in a brighter spot the other week. Hopefully they’ll speed up.

Hi, Wizzard here
I bought 400 spores of Japanese Painted Fern,like over a month or so, with all my other planting hobbies never got to them. Think there ok yet? They are in the letter they came in on top of my dresser…If they take they should be a good seller.
As for ostrich ferns. Years ago I dug a couple up road side; They reproduced so quickly and have taken over my flower beds. So I dig them up, move some,sell some, give them away.Their very cool and some get up to four foot tall. If in a good spot you will have plenty.
Good luck everybody.

Between elapsed time and some better lighting, I’m starting to see some progress. They’re actually starting to look like prothalli instead of just green fuzz. I suffered some losses due to dropping it on the ground while indulging my compulsion to check things too frequently, but I think I should still have plenty when all is said and done. 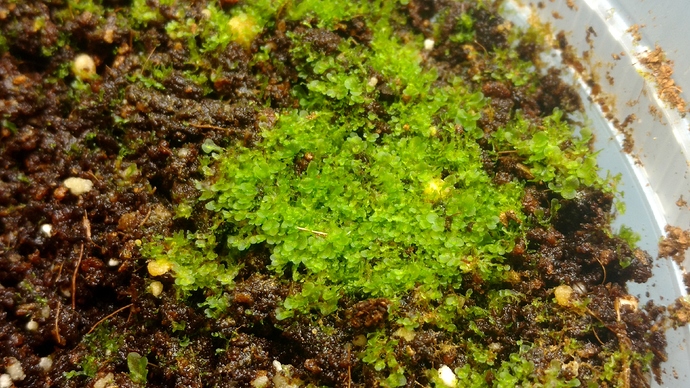