Yes, breba does mean spring. Although out here in the west U.S. I’ve always taken it to mean fig fruits on old (previous years’) growth. However it appears that some folks mean fig fruits appearing on any growth in the spring.

Is there any consensus on this term?

I understood brebas to be those growing on last years wood (that survived winter) which clearly beat the figs on the new growth to maturity (and possibly ripening in the spring in some areas). Yes?

Yes, correct. Speaking of breba, Desert King’s main crop needs the wasp. No wasp, the fruit falls off before mature.People still grow it from the breba. The wasp dies in the fig, and the fig absorbs it. Figs sure are strange plants! They have their own set of rules.

Botanically speaking, the breba is fruit from fruit buds that did not fruit the previous season. That means exclusively from old wood, unless you do some weird overwintering!

I still don’t understand how a San Pedro type works (brebas don’t need pollination but main crop does), but a little mystery is good!

Figs sure are strange plants!

So the fig I have I just stuck in my yard out of the way and whilst passing by doing other gardening I casualy observed it, and when I saw the fruit I was dissapointed that somehow I missed the flower. No seriously.
So…

…what we are agreeing to call brebas are not, because there was no fruiting at that site on the branch. Maybe the definition is a little broader, however we know what we are talking about, LOL.

when I saw the fruit I was dissapointed that somehow I missed the flower.

The fruit is actually the flower, it is outside in.

it is outside in.

Yes, fruit+flower in one, right? My curiousity got me to look it up and I found out as much. Like @Drew51 said, it has its own rules. Was not prepared…but that is part of working w/nature.

Sort of…the fig is called a syconium. Most of it is flower, the fruit would be the seeds (the crunchy part) of which there may be hundreds per fig. So you’re eating 1 flower and a ton of fruits.

Here is an update on my Winter killed to the ground 4 in a hole fig bushes. No Breda just the main crops. 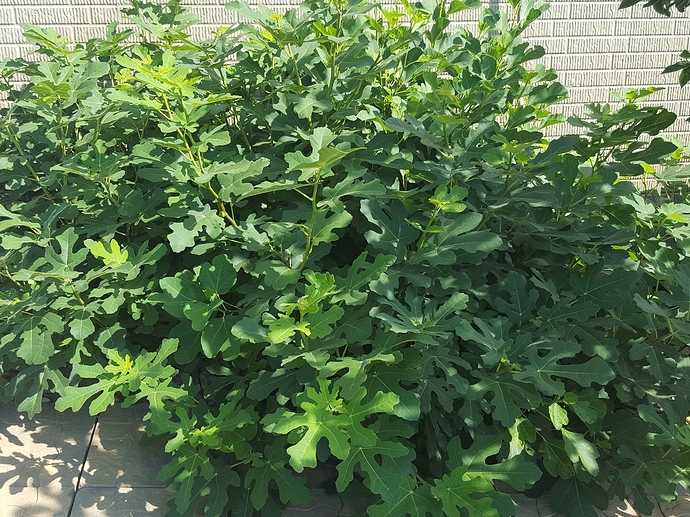 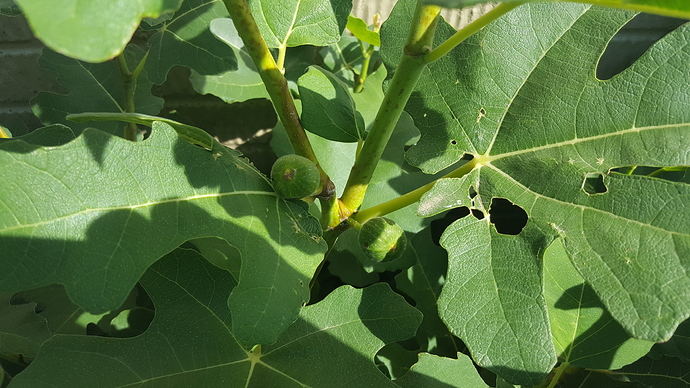 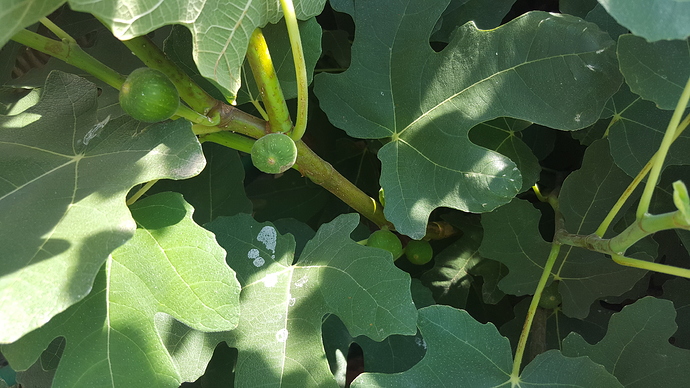 several fig forum users have had rather large amounts of main crop Desert King without pollination.

My Desert King produces a full main crop. @fruitnut told me I must have the wasps, but I don’t know how to check if I really have them. I don’t see a difference in fig development between Desert King and my other fig varieties which supposedly don’t require the wasp.

I did have a breba crop this year both on Desert King and (a smaller one) on Peter’s Honey. Breba figs are larger than main crop but not as flavorful. Still, good to have fresh figs in June.

I have fig trees in containers (Northern Illinois) which I winter in my unheated garage. The trees do fine with that handling, but I don’t understand why some years they produce a breba crop and some years not. The breba crop is the only one that gives me fruit that matures, so if no brebas no fruit at all for me. because the second crop sets but isn’t ripe by the time it gets cold in autumn and the trees need to be put away. Frustrating to have all those hard unripe inedible figs to just toss away.

Hey Allen,
Sorry I’m not the one to ask. I have an in-ground fig in zone7b so I get a non-breba crop to ripen in August. The people to ask are those who do like you do up where you are like @Drew51.

Drew is an enthusiastic beginner with figs. (That’s not meant as a put down, Drew.) Some relatively northern growers with much more experience are @hoosierbanana and @ampersand. Maybe they can help.

A begginer at fig’s although a pro on tropical plants. Florea, MBvs, and VDB, have fruited already this year for me. Others
look promising, like Lebanese Red. Ask me for cuttings in the winter. What do you have that is not maturing?

Brebas are a bit mysterious… They are no different than main crop figs except they begin formation(as a tiny embryo) late in the fall and remain dormant all winter. A few weeks earlier and they would be main crop figs, drop over winter, and be no use to you. The tree will not form new fruit buds on branches that had main crop, unfortunately, so late setting main crop causes a lack of breba the next year. No main crop means the branches will be loaded with breba, I’ve seen that before. I honestly don’t know the finer points of ensuring there is a breba harvest though, I never go after them, but I would try pruning mid season to encourage branches with fruit buds that will not begin developing before fall.

Drew you must be having a great fig year, your trees are week or more ahead of mine! It was a bogus spring here, the conditions have been great since then but the figs remember.

Breba buds can be damaged below around 25F. Additionally, if all the buds set a main crop fruit, there are no buds for breba production.

Thank you, Ampersand and Hoosier Banana for a couple of good insights. My unheated garage temperature in midwinter, according to the minimum thermometer I set each year around Thanksgiving, sometimes bottoms out at +20 F, which could well be damaging the breba potential even without damaging the tree itself. And the plan of pruning midseason makes a lot of sense too. Too late for this year. I’ll do it in '17 to maybe encourage breba production in '18. Gotta stay healthy and live that long. Plus I’ll figure out a way to keep the garage a few degrees warmer Thank you again.

There is a longtime Chicago grower who still posts occasionally on GardenWeb, Dieseler. He pulls in lots of main crop figs, even from his inground HC and late Varieties like Black Madeira. I’d read up on all you can find from him.

There is a longtime Chicago grower who still posts occasionally on GardenWeb, Dieseler.

Please invite Dieseler to this site.

Unfortunately he deleted many of his Figs4Fun posts, lots of great info lost there.