I’ve never had this problem before, but this year there are these huge green beetles all over my ripe figs. The internet suggests that they are fig eater beetles.

I tried hosing them and the ripest figs down with sevin (plus hort oil, immunox, sticker and a little soap) and today there seems to have been no change.

Does sevin kill these things? Or am I having a ph problem with my water?

The latter is not very effective unless you drench them.

Also, the beetles are currently hatching in large numbers from soils under fruit trees they dined on last year. The best protection is to apply a larvicide to the soils in the Fall and late Spring.

I know. I generally try to spray for more than one thing, and this time of year I have tomato diseases and leaf spot everywhere.

I was using the retail Sevin, which I had used against Japanese Beetles earlier in the year.

I guess I’ll try to set some bottle traps and also drench the beetles every so often. They just leap on every fig near ripeness in giant clusters. 6-12 beetles on one fig, and they eat it down to a nub stem. I thought about trying to drown them like JBs, but they seem to be better fliers than the JB.

I’ve never seen these before. In past years the problem was always moths & wasps.

Does it look like this? I’ve also had a lot more of these big green junebugs this year compared to previous years. If you take a bucket of soapy water out early in the morning, they’re not as quick to fly away. I just hold the bucket under the fruit they’re munching on and quickly knock them into the water to drown them. You’re right - Japanese beetles like to drop, but these are more inclined to fly away and need to be knocked into the bucket. 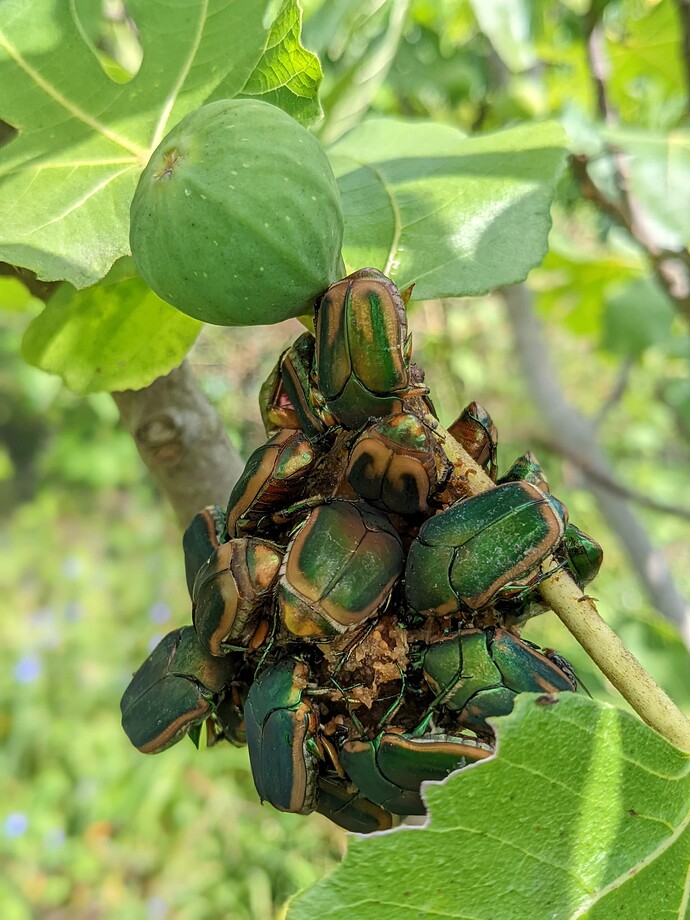