I had a couple unknowns, and also Sweet Diana that I put in ground last spring. Sweet Diana grew to over 7 feet, from a cutting started the winter before, so first leaf! Anyway I cut it down to 5 feet and wrapped it with burlap. My wife would not let me use insulation, or a tarp, or anything but burlap as these are in the front garden. It was the only thing acceptable to her as a lot of people wrap evergreens here, so she was ok with only the burlap. I put square tomato cages around them and stuffed with straw. They are stackable and I needed two for Sweet Diana.
Here they are wrapped. 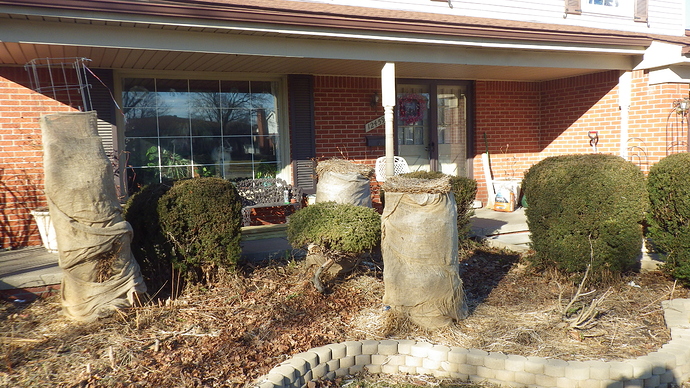 4608×2592 3.7 MB
Today I unwrapped them. A bit early, but i was afraid they might start growing. They did not, and look stone cold dormant. I could have waited. Still a touch early to unwrap. I noticed the straw was very cold in the center. Colder than outside. They were dry as dry can be too.
Here is Sweet Diana 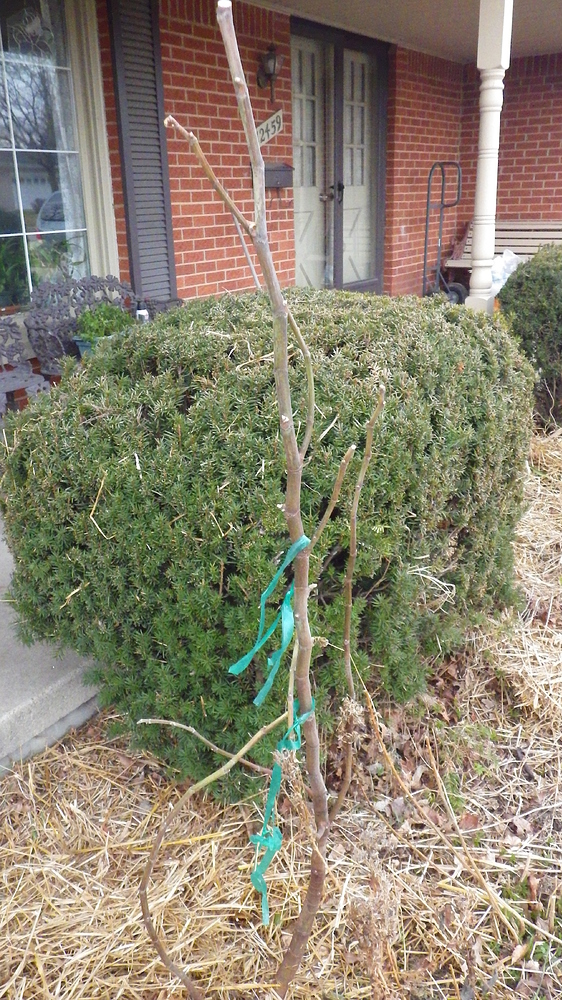 I checked how much damage. I scraped bark 4 inches down from top on all of them. 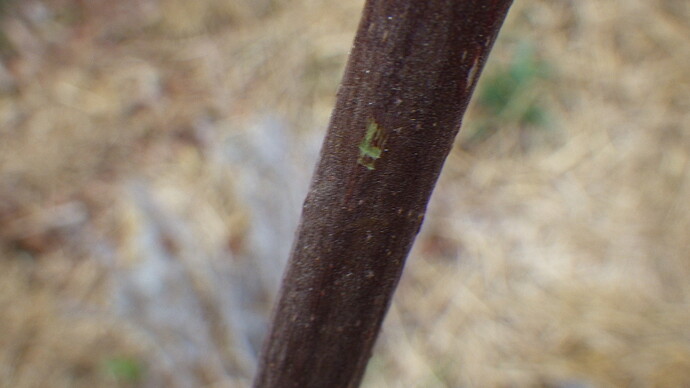 Looking great, Drew!
Makes me hopeful for the ones in my yard…we got down to -7 F several times, which counts as a mild winter for Maine…
Did SD make fruit for you last season?

Did SD make fruit for you last season?

Yes, but only a few, I had one in a container too, and it made more, Seems they fruit more if root bound. A much smaller plant too. It should explode in fruit this year.
Last year at this time, it still was a rooted cutting under lights waiting for it to warm up.
Nyfig is the guy with the mother tree. It grows on Staten Island Zone 7a and has been in the ground 6 years. Unprotected even during the polar vortex winters. It didn’t die back. Originally came from Italy 36 years ago. It appears to be a Celeste type fig. So it’s a good candidate for in ground.

If anybody wants to try it, next fall, late in season I will have to trim it down and many cuttings will be available. I expect this to grow to over 15 feet. Just pay postage. I liked the figs, they were sweet, can’t remember much else. I was trying 20 different figs for the first time last year.
Here are some photos from NYFig 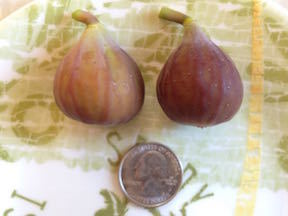 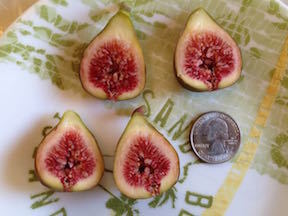 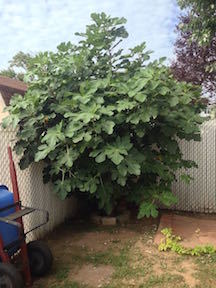 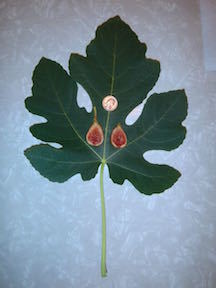 No dieback at all!

I’d wait until they start growing to declare victory. I hope they are 100%. But figs are weird. They look OK until they don’t. If they grow well way out on branch tips they are 100%. Often they grow strongly from down low and weakly from higher up because there has been some damage.

I’d wait until they start growing to declare victory.

I could also have taken them out too early. They could become damaged. All the same very green 4 inches from the top is a very good sign. It is not going to go below 25F here anymore. Well chances are slim, and as of now, they are still fully dormant.

I pulled the tomato cages straight up and over to remove them. The straw stayed with the cages. Now the birds are stealing the straw like crazy for their spring nests. I’m like the Home Depot for birds! 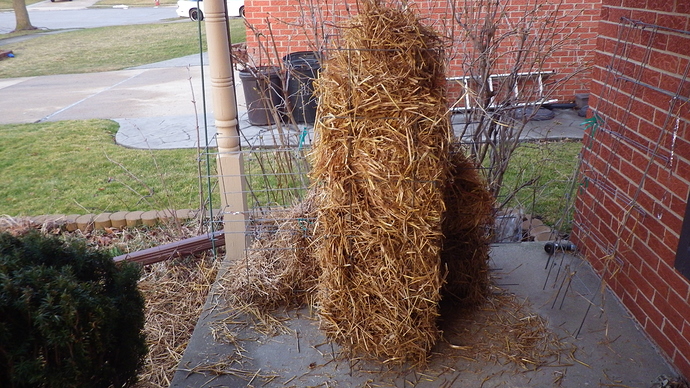 Here is the base of the SD fig tree. 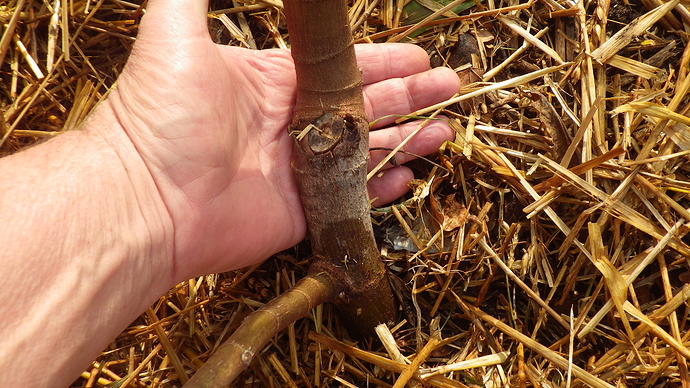 Sweet Diana Unknown has been in the ground for 6 years here in Staten Island, NY, Zone 7a. Last year was going to be the final time that I protect her for the winter but going to do it one more time due to the polar vortex. She did not experience any dieback but she did put on fruit later than normal

Celeste is just a bad choice for planting in the ground. Protection is never guaranteed, even when adequate and timely other factors can take the tree to the ground. Celeste rebounds from damage with extreme growth, there were many observations of this from Southern growers in warmer zones with damaged Celestes during those cold years.

Thanks for the info, I don’t know if it is a Celeste or not? Appears to be. Is Celeste an Italian fig? As this is.
Also I got that wrong about protection, thanks for the correction! The south and the north to me are not comparable in many ways. When it becomes cold there, it probably was warm before and after, here the amount of hardiness is built up because it’s not warm here, just cold and colder. We had freezing temps for a long time before it got down to -1, so hardiness was fully there, and probably in most cases not true in the south. So that info from the south in reality is not useful for my situation. A good example happened this year. Many have lost all of their plums this year, and some peaches too. In the Northeast and south, All my plums are fine.

I was reading up on Celeste unknown origin. No brebas most of the time, this tree has brebas.
From Nyfig
“In NYC I’ve had breba as early as July 5th. Generally, the main crop ripens during the last week of August to first week of September, then right through to the end of the season”

Here it is usually early and late cold that do the most damage when the trees are vulnerable to ~27 f. Staten Island probably does not have much of a frost problem either because of the water, and the trees can enter dormancy gradually. But there are other problems to think about, like unrestricted growth from rich soil and ample water reducing the fruit set, cool weather patterns in early summer making figs drop… problems here but maybe you will get lucky. I think you are in over your head though, that tree will need more and more pruning each year for protection so will rebound with vigorous growth more and more like after winter kill.

I have a lot of other figs to try too. So I can pull it. I’m keeping one in a container too to compare. Grafting some figs today unto some unknowns. I’m hoping just to propagate the figs like this. Eventually putting them on their own roots.
The spot SD in, is extremely dry, and tough competition from that bush next to it that has been there 40 years. I’m a little worried about the fig not getting enough water.
I do have 40 years experience growing tropical trees. These are the easiest I ever tried. I probably will form permanent fruiting branches, so not many figs this year as I prune to fit my needs. I want the trunk to be a lot thicker too. I think it should be easy to control compared to my crazy growth blackberries. I grow over 10 different cultivars, never counted them 10-15. Now those are hard to keep in line, but I often show them my chainsaw and threaten them.

With figs, it certainly would be easy to remove it. I want to plant about 20 more, but only a few at a time.

Boy I can blab on and on can’t I? If the tree becomes difficult to manage, I will pull it. I didn’t know that info about Celeste, but typical of me going through the school of hard knocks. The fruit is pretty good from what I can recall. Not a great winter for an experiment, it was too warm. It may not be worth developing scaffolds for a number of reasons, hard to protect, and if it dies to the ground every other year, no point.

I just want to save you some heartache! I’ve only found one productive Celeste around here, and it was very well sheltered in 7b with much less annual growth than I normally get when planting. It would be great if SD is different, a Celeste that does not drop is still mythology to me though… My Celeste was productive and didn’t drop the year I bought it, then did after I planted it and also set hardly any figs from then on, but plants started from that mother didn’t drop fruit in containers, so it will take a lot of convincing for me to believe.

Good to know. Now that you mention it, I have seen threads about Celeste dropping.
It truly is just an experiment. The other two figs in the ground, which are unknowns. They all seem to be in the same condition. Basically I had no place else to put them. So thought I would fool around with them. In the backyard I left two unprotected. Looks like the tops are dead. I guess you can call that my control specimens. Seems the protection worked, but as Steve said I need to see growth.
I counted my figs today, I have been in denial. If I count the two coming, 38 trees. How am I going to get that down to 10 to 15? Every tree in the garage survived. I took them out today. I will probably shuffle them back in. I needed to sweep up the debris from them. Plants are messy soil all over the place.

So do you have any in the ground that you like and are doing fairly well?

All of the Etna types are usually good Drew, if the location agrees with them and they don’t get too congested. Florea is super productive, not always the best figs and sometimes full of ants but astonishing how many figs it ripens over the season. I’ve got hope for a few others but it is too soon to say if they will be reliable under the stress of growing in ground here.

I have to load most of my containers in a truck 2x a year so I hear you! I am trying to work out a way to grow them so they can overwinter out in the field. I put some seedlings in compost socks last year and they grew great, and it occurred to me I could probably just tip them over and cover/mulch for winter, so I will try some of that this year.

I only wanted one good variety when I started and now don’t really keep count, fignorance is bliss

I want to try both Red Lebanese figs, these are not Etna, but seem cold hardy. Unknown Teramo too, it is a small fig, smaller than Mt Etna, it is also almost perfectly round, and very tasty! Teramo is a high elevation region in Italy.