I’m going to pull between 1 and 4 trees before spring for lack of results. The apple, which has gotten out of control, the pluot, which hasn’t set so much as 1 fruit in at least 4 years, and maybe the cherries, which crack and rot pretty badly plus have terrible shothole problems in the fall.

I think I’m going to put in a fig and a mulberry in the place of some of them. I’m in 7a/b in Richmond VA, so I need a fig that will survive dips into the teens with some protection and I don’t actually know if I am in the popcorn disease area for mulberries.

I’ve got a Celeste in ground now, and it’s survived reasonably well. Hasn’t died to the ground in 3-4 years.

Where are you and do you plan to grow in ground or pots?

Uh, did you not read the opening post? I guess I wasn’t excessively specific about planting in ground …

Gerardi is reported to be immune to popcorn disease

You can’t go wrong with a Hardy Chicago type of fig. They should produce a decent crop even if they die back significantly, and mine seem to harden off better than most figs and generally don’t have much die back here in 7b North Carolina.

Florea would be a top choice for the earliest and most productive option.

My in-ground Adriatic JH is a great late season producer of excellent figs. Growers in New England don’t have a long enough season for that one, but it works well here and might still be an option for you too.

Dalmatie is a similar tasting fig to Adriatic JH, but it’s a smaller and slower growing tree. It also tends to harden off better than Adriatic JH, but hasn’t been as productive for me. It’s also quite late.

My Celeste ripened its last figs about 2 weeks ago, once it started hitting the 50s at night. Do you think either the Adriatic or the Dalmatie would still be productive now?

My Adriatic JH (different from Adriatic, but comparable to Verte/Green Ischia) has produced as many figs in the last few weeks as any of my other trees. Some split after rain, and there are wasps all over them chewing holes in them, but I still get plenty. I never get all the crop before winter sets in, and we’ll see how they handle this week of near freezing lows. But generally it’s an exceptional variety that still tastes good even when the weather is getting colder (unlike many other varieties that produce late figs here in NC).

Dalmatie type figs are much larger in size and have the same splitting/spoiling issues. I like them a lot too, but haven’t had the same production from my tree as with Adriatic JH.

I have a chicago hardy fig and love it… very productive (400+ figs in year 4)… got 27 ripe figs yesterday off my one tree.

I am thinking about adding olympian next… it is very cold hardy (like CHF) and a big producer… large figs that taste quite different than CHF. They say peach/melon/honey flavor.

You might also consider persimmons… i am adding soon IKKJ (asian) Kasandra (hybrid) and a few american varieties.

Any healthy specimen from the “Mt. Etna” family of figs would be great. All are similarly hardy, productive and reasonably early. My personal preference would be “Malta Black” (because it’s often a touch earlier than the others and I think it has the best flavor), but you wouldn’t suffer by planting out a “Hardy Chicago” (easiest to get), “Letizia” (also easy to get a healthy start of because, like HC, it’s commercially tissue cultured), “Marseilles Black,” “Nyack Purple” or any of the countless other named specimens of this general type. All are fig machines, and all bear tasty berry-flavored figs. The only must-have fig in marginal climates, as far as I’m concerned.

“Improved Celeste” would also shine in zone 7 Virginia. It’s early and very productive of nice-sized, sweet, simple sugar figs. Mine has done well planted in a microclimate in 6b Kentucky.

You might also consider persimmons… i am adding soon IKKJ (asian) Kasandra (hybrid) and a few american varieties.

I agree with @TNHunter on Silk Hope - it’s my current favorite mulberry, and on growing persimmons. A non-astringent Asian type like Fuyu or Jiro should do well for you.

@TheGrog just like other mentioned Mt.Etna type figs as they are the most cold hardy and early enough to give decent amount of figs. All my figs are in ground protected by low tunnels in winter.
My recommendations for Mt. Etna types are

For early Green Fig for a different taste profile, you cannot go wrong with Florea.

If you can only add two figs I would recommend Florea and Hardy Chicago and you will be set for your fig cravings. Happy growing …

What if I can STILL grow only N figs in the Northeast -- Which should I...

ccTwo years ago, I started the new topic titled, "What if I can grow only N figs in the Northeast -- Which should I choose?" https://www.ourfigs.com/forum/figs-h...hould-i-choose...

This is targeted at growers further north than you, so you should feel comfortable with some of the relatively later ripeners, such as VdB family. And both Adriatic (e.g. Paradiso Gene, AJH) and European Brown Turkey (e.g., Laradek, Olympian) should so better for you the here.

Bill Lauris at Off The Beaten Path Nursery in Lancaster, PA loves Rockaway Green for an Adriatic type fig- a couple weeks earlier than his other Adriatic types, resists splitting. I have a small air layer in ground but can’t say how it does here 7B MD for a couple years. Bill raves about it. Would like to see it compared to Green Michurinska, another “earlier” Adriatic type.

Just be aware that, a lot of the figs in the same group like Mt. Etna and Adriatic are not true to their names any longer. It is hard to tell which is which since a lot of them look similar.

I have a trees tagged as JH Adriatic. It sets excellent figs. But leaf shape is just somehow different from two other JHA I get. So I do not know how much it is JHA or another variety. I care less since it gives me excellent figs. No splitting in late season.

One of the best fig variety lists out there- have passed this to many friends over the last year.

Do you know if there is a significant difference between Celeste and Improved Celeste?

I actually have a VdB in a pot, but I was under the impression it was significantly less hardy than Celeste. It has never been very happy about being a pot, but the few figs I got from it were quite good. I may put that in the ground instead.

I have grown Improved Celeste but not plain old Celeste, but my understanding is that Improved Celeste is earlier and larger. I’m sure that the people at LSU who developed Celeste hybrids worked hard not to release offspring that were worse than the mother.

I have a personal bias about figs in pots – the bigger the pot the better. IMO, it’s very hard to get a good crop of good figs in a pot smaller than 15 g. But other better growers can see it differently. In any case, I have Nero 600M and Valle Negra (both VdB types) in large pots and they both do very well.

The old Celeste does not grow well in cold zone like zone 6 etc. Do not expect figs after winter die-back. Fig still excellent.

My neighbor has a 18+ year old tree. They do not prune it. It does not set any figlets. I pinched it this year. Finally I got a couple figs late into the season. So it is confirmed as the old Celeste.

As to container size, it is hard to manage a bunch of 15G+ pots. I will only go up to 10G. Then they go to the ground. Those 15G and 20G pots can break easily. Just too heavy.

Do you know if there is a significant difference between Celeste and Improved Celeste? 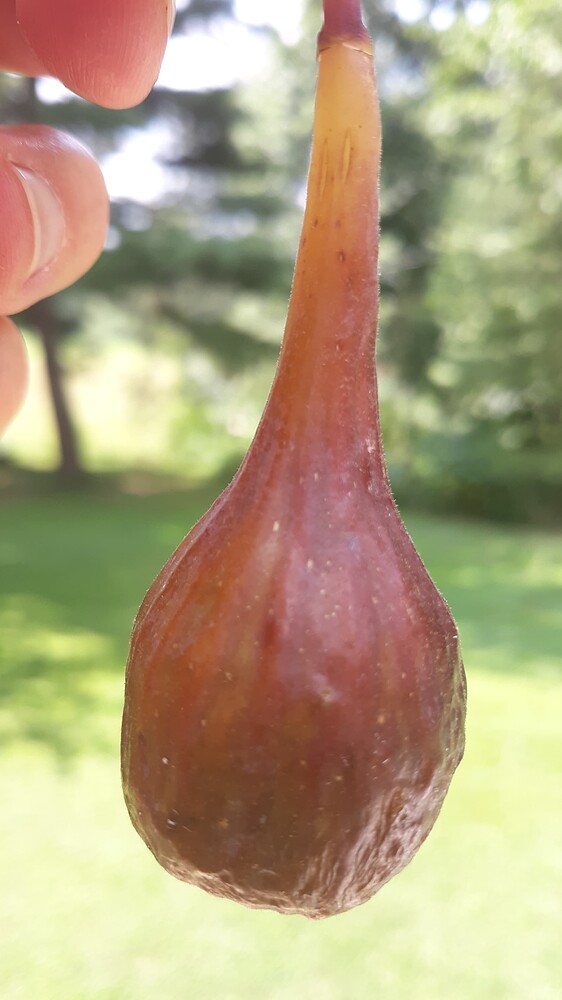 This is the unreleased “Improved Celeste”—not “O’Rourke,” which is LSU’s official “improved Celeste” cultivar. Flavor is not complex: just sweet and pleasant. Wood is not quite as hardy as, say, a Mt. Etna-type, but it does okay in a microclimate with protection here—and would probably do great somewhere a zone warmer.

I actually have a VdB in a pot, but I was under the impression it was significantly less hardy than Celeste.

Yes, I’ve found all the VdB types to be very cold sensitive; they were impossible to fruit in ground here. I did keep a Beer’s Black to grow in a pot. I agree that the figs are very good.

Speaking of Bordeaux figs, “Ronde de Bordeaux” is sometimes called a “cold hardy” fig, but I’ve found it very cold-sensitive as well. It is one of the earliest, though—if the wood survives the winter. Might work in zone 7, especially in a microclimate. I honestly don’t like the flavor—unless the fig is wrinkly ripe, at which stage it’s quite good with a note that kind of reminds me of sweet glazed beets. I’ve got one in a dry spot—in the rain shadow of a shed; it dies to the ground every winter (I don’t bother protecting it) and it usually ends up ripening two or three small but fairly tasty figs in September. They’re terrible splitters if they get too much water, so a dry spot is ideal.