I saw the pears in the Harrow research program in Canada have breed Barlett type pears with fire blight resistance. However, fire blight pressure is worse in the humid southeastern USA (I’m in zone 7a, Tenn.).
HAS ANYONE HAD EXPERIENCE WITH HARROW SWEET, HARROW GOLD, HARROW DELIGHT, & HARVEST QUEEN in the southeast having good fireblight resistance?
Thanks!

@Auburn can likely be of help to you on this as he grows Harrow pears in the south. Some southern locations are ofcourse worse than others @rayrose @coolmantoole @k8tpayaso may have some great suggestions for you.

The two Harrow pears that I have any experience with. Harrow Sweet has had no Fireblight issues as of now. It has fruited a few years without any problems. My Harrow Delight hasn’t fruited yet but it hasn’t had any problems. These are a couple more pears with minimal fireblight issues, Orient and Ayers.

Between Harrow Sweet and Harrow Delight, which one has the sweetest or best taste (I know this is very subjective what people like).
Thanks!
Frank

Here is a article on CSU extension on pear and apple resistance to fireblight keep in mind no pear or apple tree is immune. They may just be resistant. https://extension.colostate.edu/topic-areas/yard-garden/fire-blight-2-907/

You will end up having to buy two anyway because pears are not self fertile for the most part.

Harrow Sweet was a FB magnet for me. I got rid
of it.

or you can graft a suitable pollinator instead.

I already have Harrow Delight and some others.

I have 2 Harrow Sweet. Blooming now and nearly all fruit spurs have fireblight. May have to remove these trees.

Are you sure it is fire blight, not blossom blast? Blossom blast, in my experience, is not deadly but the symptom may confused people.

The most common symptoms are wilting followed by browning or blackening of blossoms, often spreading through the entire blossom truss and killing the fruiting spur.

Not sure if blossom blast or fireblight. The infection is definitely starting in the flowers and proceeds along the wood. These trees are nearly all fruiting spurs so no typical shepherd’s hook to be found. I’ve pruned and will be spraying streptomycin soon. These trees were sprayed with Kocide and lime sulfur earlier. My other Asian pear blossoms aren’t affected (yet). It’s been windy and humid with warm temps at night.

blossom blast occurs during wet weather when pears are blooming. It does not affect the whole tree, either. It is affected only blossoms.

In my experience, blossoms of one branch of my Korean Giant got wiped out overnight. But branch, leaves, wood, were not affected. That branch recovered well the next year. 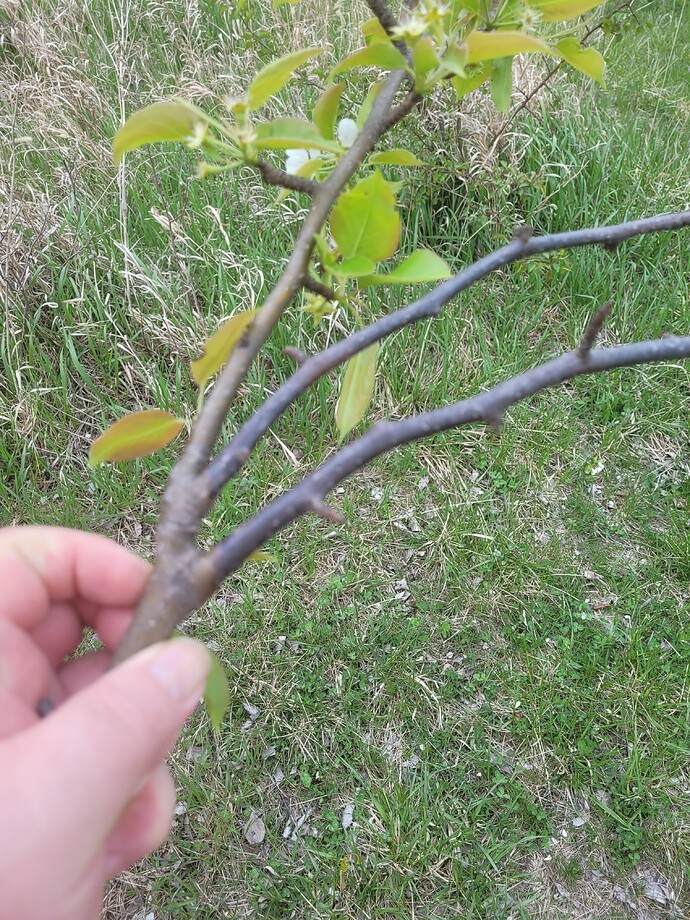 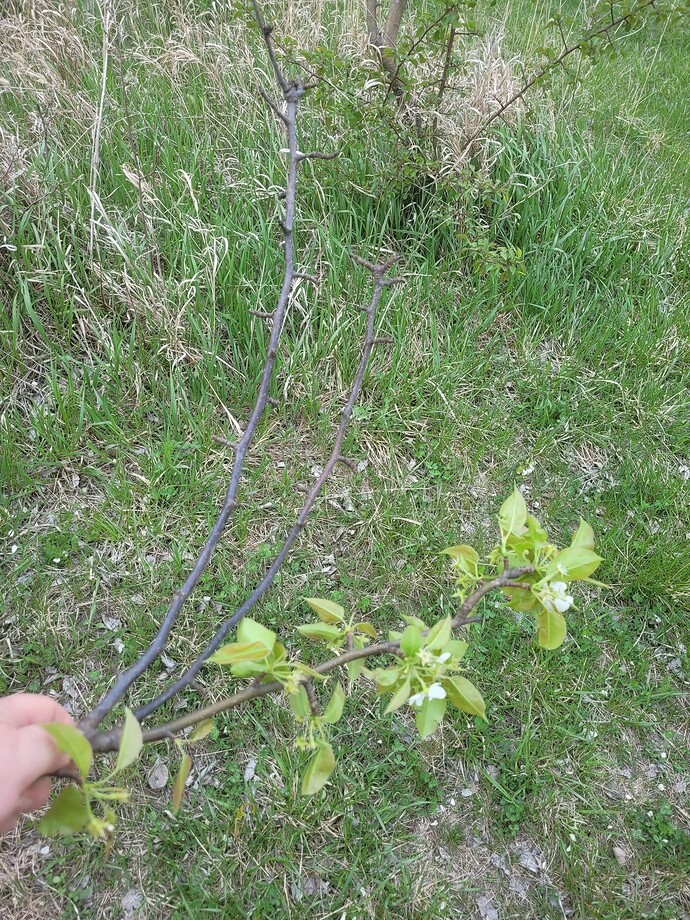 How to prevent blossom blast then? Should I spray copper or streptomycin during bloom?

Spray copper for both blossom blast and fireblight. They are bacterial and copper eliminates or reduces bacteria.

@Olpea got hit with fireblight on Harrow sweet here.

True. It was a mature tree, which succumbed to fireblight.

My thought is none are really FB resistant. Just more so than others.

I never had FB before. Last year cicada beat up all my trees and I saw FB for the first time. So a tree going down from FB doesn’t mean it was suseptable. That’s the way it works, everything targets the weak tree.

I’ve got a new Harrow Sweet blooming now. So perhaps this one will do better than the last.

The last HS wasn’t weak. It got fireblight through the blooms and died. Interestingly, at the time I had two Barlett pears which are supposedly very susc. to fireblight. Both have had fireblight, but neither died from it.

My understanding is fireblight is actually worse on vigorous trees. Commercial apple growers spray growth hormones to reduce vigor. I’ve done that some on apples before with apogee.

I remember a long time ago Bob Purvis came to my house. He told me a story that when he was acting as a paid consultant for a large pear orchard, he told them to cut back on their irrigation and fertilizer. He said not only did they save money on fertilizer, they also saw a drastic reduction in fireblight.

I’ve never forgotten that story, so we don’t fertilizer pears at all (they are plenty vigorous without fertilizer). We only fertilize apples with P and a little bit of K. The exception is that we have some apples planted in pure clay. They aren’t growing much, so plan to put some N on them to get them going.

I thought I read that Harrow Sweet is Bartlett cross. Is that why it’s FB susceptible?