My friend’s tree in Sunnyvale,CA. I pruned off a few inches into healthy tissue and disinfected the pruner. 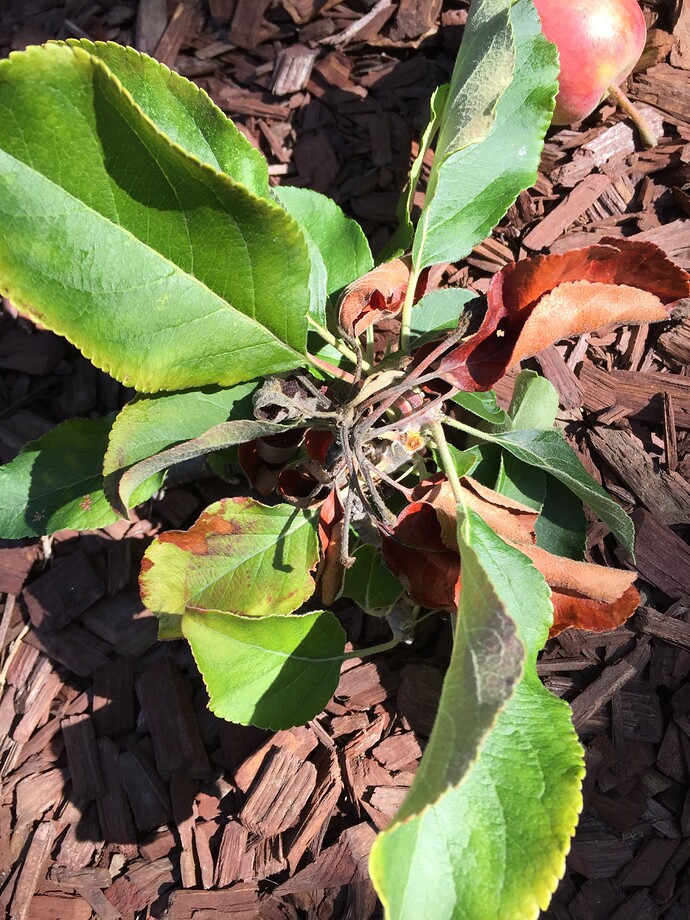 What was the variety that was infected? Just curious.

In my eight years of obviously limited fruit growing experience I just got my very first fireblight strike today, well, I’m pretty sure of it anyway. I have previously NEVER done any dormant or pre-bloom sprays. I always read about it, and always thought it a good idea, but never bothered. This was the first year I sprayed dormant oil and copper/sulfur early winter and then again early spring dormant oil (Volck), copper, sulfur, and chlorothalonil.
And what do I get for that forsightedness…my first ever fireblight strike. Wonderful. And in a year that the weather most definitely did not favor fireblight.
It did indeed come on Honeycrisp whose fireblight susceptibility has been played down recently and probably rightfully so, nonetheless it got it. Not a bad strike at all, and seemingly limited to just the one shoot, but we shall see. It’s been so dry here (inordinately so) and my trees are generally kept in good health with good sanitation. Just goes to show you can only do so much.
No streptomycin here, wouldn’t spray it even if I had it.

@Appleseed70 , we had a perfect storm of fireblight conditions in that last rainy spell. The bacterium is always around, all it needs is the perfect storm of conditions. I got more tip strikes in that spell than I have gotten in the last three years combined.

Thanks for the confirmation guys. My friend inherited three fruit trees, two apples and a persimmon. The apples seem like they are Anna and Dorsett Golden since they ripen so early here. The later variety is what has the fireblight, the other one seems fine. This could be because we had spring rains right when the later variety bloomed.

Scott, you guys must have received some rain that we didn’t get. My lawn is so burnt out it looks like late August. I’ve never seen lawns burnt out here in May…or even June for that matter. We need rain and need it badly.

Scott is always getting rain that somehow bypasses you and I on its way to him.

My backyard is in the rain-shadow of the Catoctin Mtns. Often times storms float right over us - barely get a drop - and then they explode over Balto.

We missed many of those waves but finally got nailed in one. If you were watching the Preakness you saw what I got.

Good for the “mudder” horses!

Is Honeycrisp generally blight resistant or a problem variety?

If you read newer data (and also much older data also) Honeycrisp is generally graded R=resistant for fireblight. It is described by orangepippin as a DR tree, but that is probably going a bit too far imo. ACN scores it a 5 for blight resistance.
It is not a “problem variety” for any of the major apple diseases, it fact, it scores pretty well across the board, save for powdery mildew which can easily be controlled, even organically.

It does, however come with it’s own unique challenges with bitter pit and can suffer from related rot issues as a result. They benefit greatly from calcium sprays and I believe commercially all generally receive foliar applications.
I cannot imagine an apple more worthy of growing and it’s also a great keeper, ACN scores it a well earned 9.

It is most definitely not a no-spray apple though, but honestly, I’m still waiting to find one of those.

Thanks Appleseed. At a former home I had a no-spray Golden Delicious, had lots of russet, on standard roots that I never sprayed except dormant oil. 30 years loaded with mainly clean fruit. I had lots of natural predators from wild meadows and nearby hedgerows that apparently kept the insects in check.

At a former home I had a no-spray Golden Delicious, had lots of russet, on standard roots that I never sprayed except dormant oil.

My GD is apparently unattractive to codling moth. The rest of my frankentree can be getting hammered and the GD will be completely untouched. Is this common to yellow/green apples?

Had my real first experience with fb this year, had the same perfect storm of conditions experienced by Scott. During full bloom.it was warm and had a stretch of rain 8 out of 9 days. Even my copper and strep sprays could not overcome the conditions. My rookie errors no doubt contributed to the problem, just before the rain started I had notched most of the trees and sprayed Promalin to promote branching. Plus the trees had just got a good dose of calcium nitrate. It seems like a worst case scenario for fb. I mainly experienced blossom blight which killed a majority of the fruit buds. Out of my 50 or so young trees the fb outright killed Zestar on G-11 and Aunt Rachel on B-9. The other trees survived the onslaught in a weakened state. The shinning star varieties that suffered minor fruit loss were Williams Pride, Rubinette, Goldrush, Sundance, and Hudson’s Golden Gem. Some varieties that are rated fb resistant like Red Free, Pristine and others do not have a single remaining fruit bud.

I find it of interest to note that all but one of those is either a yellow apple or descended from one. GoldRush,Sundance and Rubinette are from YD. Williams Pride is a red apple, Hudson’s is a yellow/green seedling apple. (Yellow Delicious is thought to be descended from Grimes Golden.) I hope The Orange Pippin is accurate on this as they’re my only source.

Coincidence? I think not! Inquiring minds want to know!

Got killed by FB last year but sprayed strep 6 time this year, Last year my FB was so bad, I was advised go remove all the apple this year and force the tree to grow on 600 two and three year old tree . 100 PPM on the strep is not strong enough, it took about 150 PPM to see leaf burn that indicates the step is strong enough, Be sure to spray ahead of the rain, The Maryblight computer model was developed by experienced experts and is very helpful in my part of the country - and its free! I followed the model this year and no blight.

I’m not a fan of most non-red apples, but I had some Golden Delicious last year that were utterly superb. Totally surprised me just how good they were.
I wouldn’t have thought GD to ever be a good candidate as a no-spray tree either, so that also surprises me. Maybe we don’t give GD the respect it may deserve?

Seed, I purchased GW direct from a grower a few years ago that had been in cold storage around 6 weeks. I was pretty shocked at how great they tasted. That experience got me thinking about growing my own apples. I am growing several varieties now that have GD as it’s parent. I was looking forward to tasting Hawaii this year for the 1st time but the tree is barely alive after the fb with no fruit.

Ouch sorry to hear about that Chris. I used to get damage like that and only by over the years removing the most susceptible varieties did I get things under control. I have not sprayed copper or strep in four years now. I would keep tabs on what seems to get it the worst and don’t keep those trees too long. One year is not the most telling, its random to some degree. But the pattern eventually emerges.