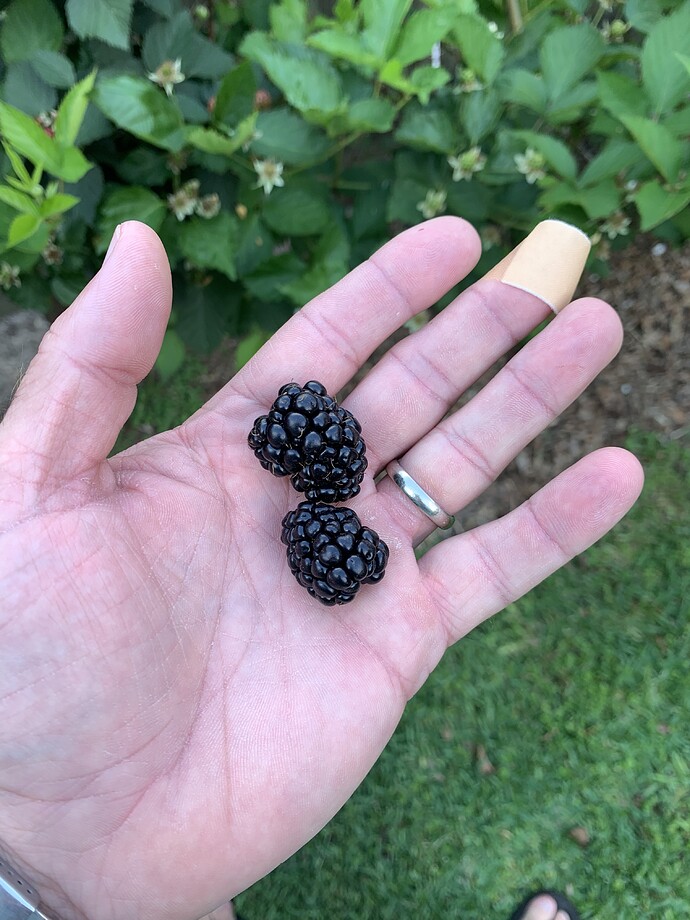 I got a few Ponca blackberries yesterday and they were pretty good. Definitely not as acidic as my other cultivars but not as sweet as I expected. My bushes are full of green berries and the plants are putting out a second round of fruiting spurs. The leaf rust that were affecting the over wintering leaves have not been a problem this spring. I’ll report back when I get a better sample. My prime ark freedoms have been very good this year, definitely sweeter than the previous two years.

IME, Ponca has to be slightly overripe to develop sweetness.

I planted two Ponca last year, but it was early summer, so they didn’t put on a lot of growth. But they did survive winter here pretty well.

I took a few pics of them today, they’re pushing up new canes, so I hope they’re vigorous. No fruit buds on these, which is to be expected. 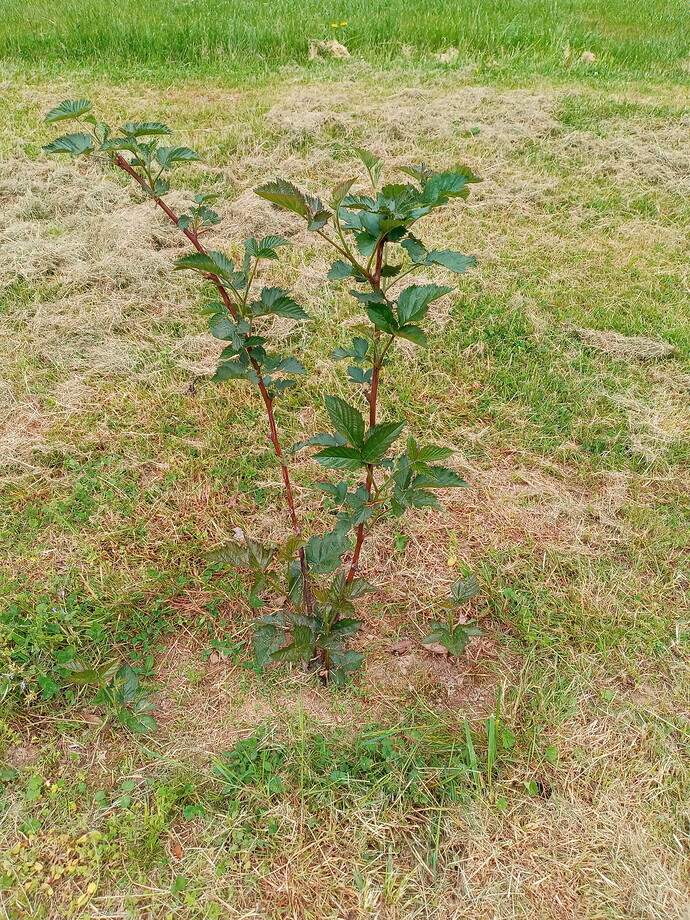 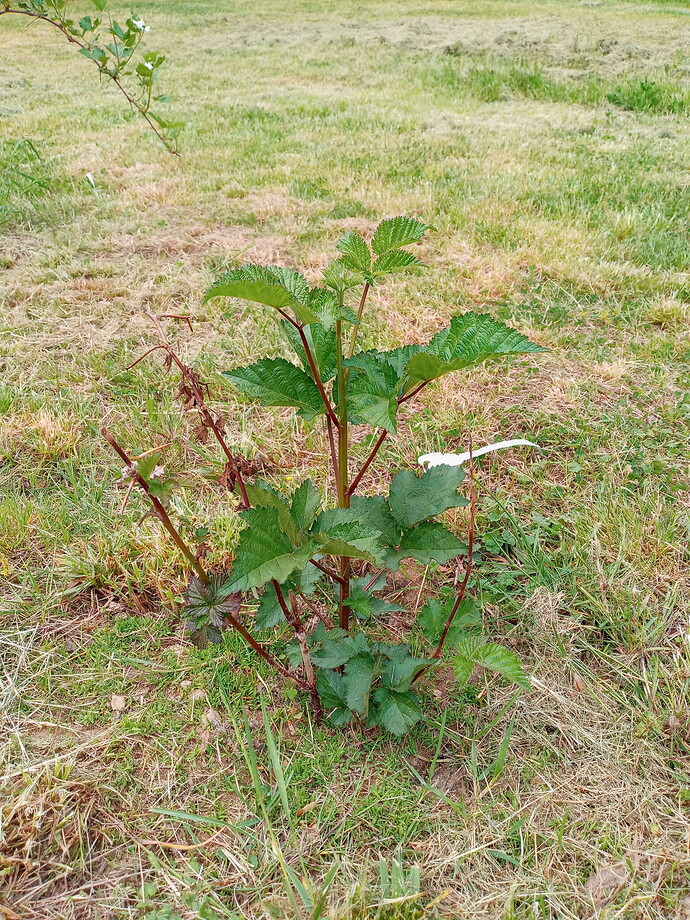 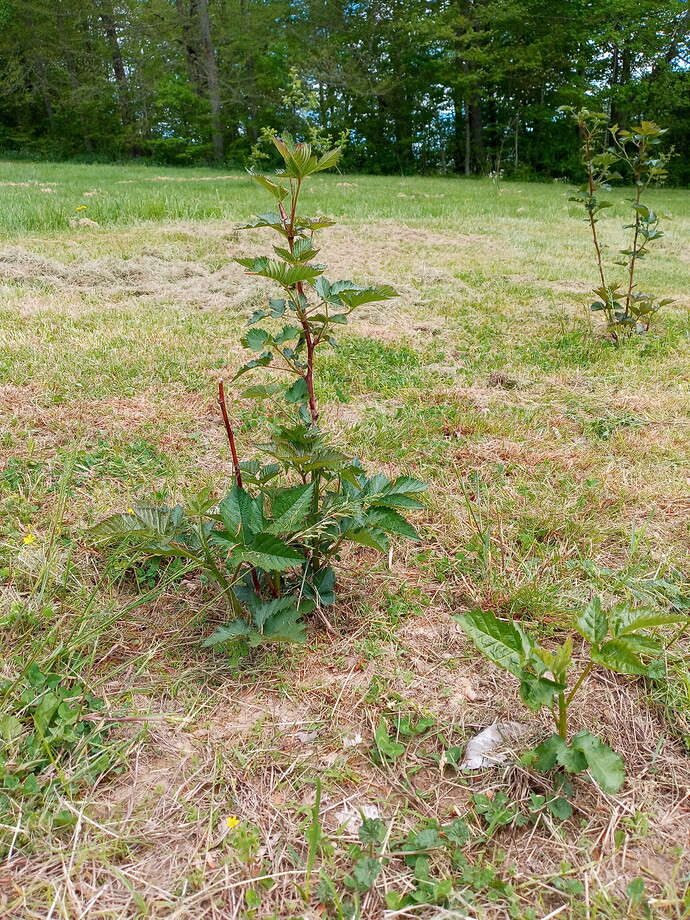 I also planted a Natchez and Caddo last year too, and I actually have a few fruit buds on the Natchez- 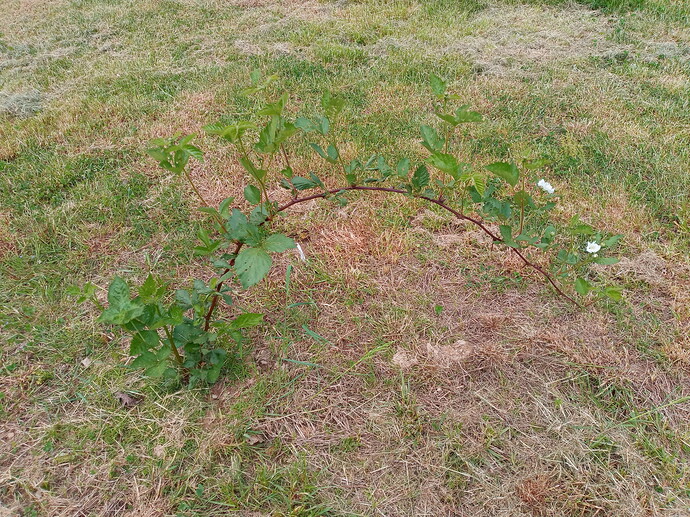 My other UArk varieties are blooming, including Osage, which have purple flowers- 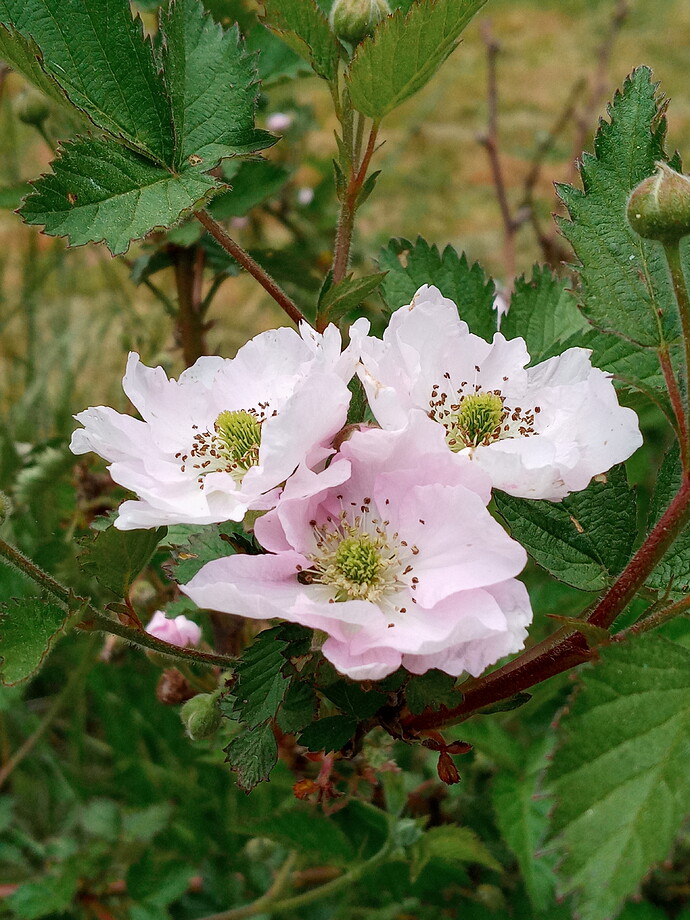 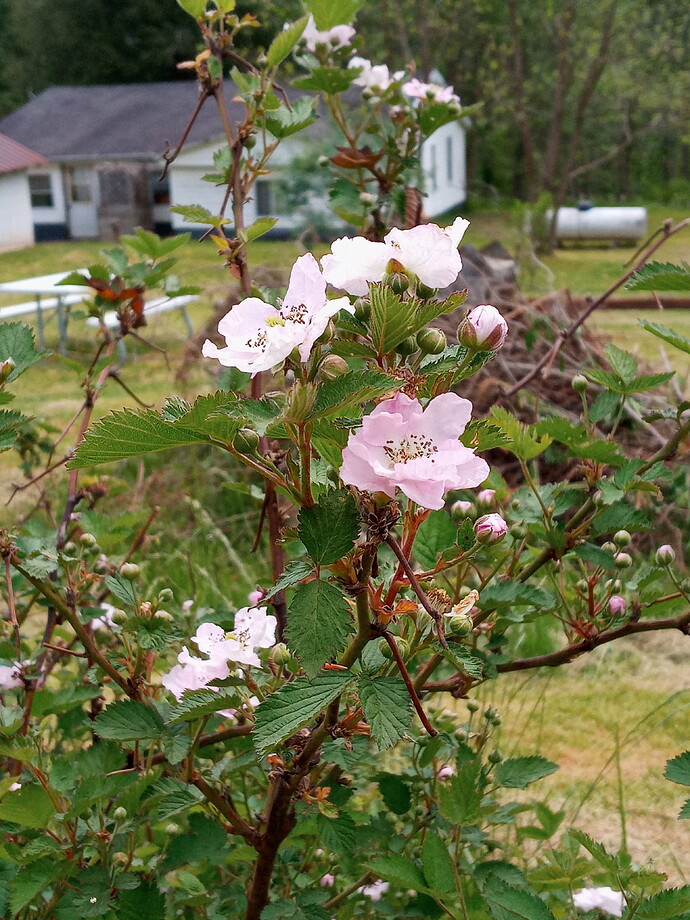 ). Mildly acidic with a clear sweetness that shines through. A fruity, aromatic flavor enhances the overall taste. No bitterness unlike my prime ark freedoms, which have been fairly sour so far this season (low leaf-to-fruit ratio on the earliest laterals).

Hope to get my first Ponca fruit this season. So far they are nice
And large

Bitter aftertaste is what I don’t like about PAF. Glad to hear that Ponca doesn’t have that.

Figured I would give an update. First flavor has been very good. I have one plant in a container and the sweetness is not on par with the plants in the ground. It is however earlier than the inground plants. The potted plant is slightly more vigorous as well. The potted plant pushed up new primocanes over a month ago and they are growing like crazy. The in ground poncas have only just begun sending up the new primocanes. The floricanes send out flowers in stages it seems. I ate my first poncas about a month ago and have had ripe berries daily since then. Up to about a cup a day for the month(8 plants). There are a ton of red berries now that should turn black in the coming week. There are also another wave of green berries that are 3 weeks behind the reds and the plants are flowering again. The heat is turned up high right now so I don’t know how the berries will tolerate it. They seem to not want to turn all the way black in the heat? They are still edible just not wanting to ripen all the way.

Productive, sweet with fewer seeds than most U of A berries. 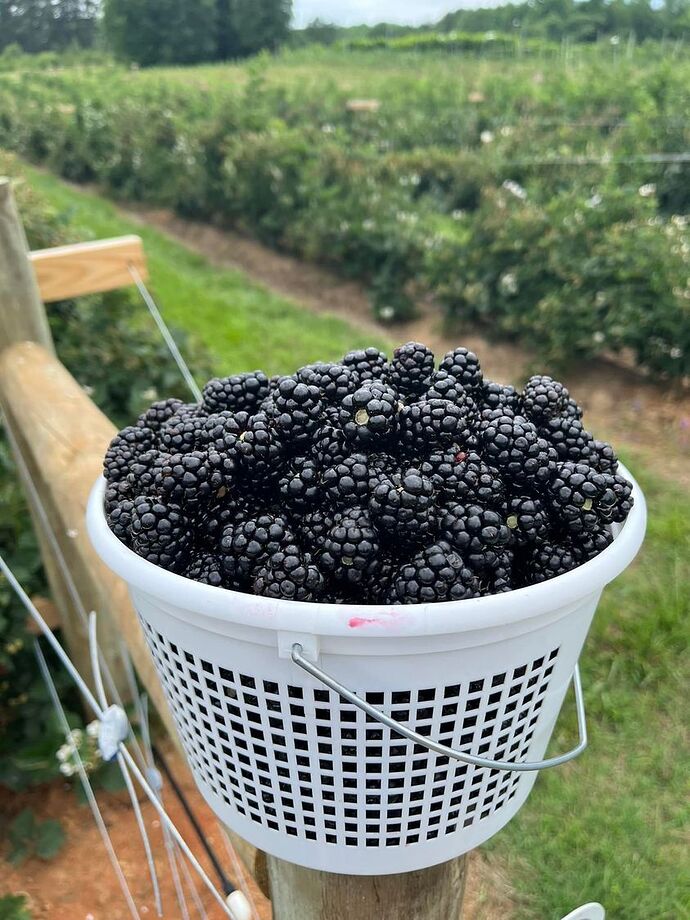 I’m comparing with a local thorny upright wild blackberry. Ponca and Caddo both have a lack of blackberry tartness along with a slight bitterness. Both have to be left on the plant until overripe before developing full sweetness. Overall, I rate them as good blackberries, but if I am making jelly I want the wild berries that taste much better. The wild berries are 1/4 to 1/2 the size and not as sweet.

Ponca and Caddo both have a lack of blackberry tartness along with a slight bitterness. Both have to be left on the plant until overripe before developing full sweetness.

No bitterness reported so far in my area and they do not need to remain on the vine until overipe to gain sweetness like the older varieties. They are not soft even when ripe and keep well in the cooler.

Only sold about 250 gallons so far, but we have received a lot of positive comments from the PYO customers on the new varieties.

We are testing the newer Oregon varieties too. I’m pretty sure they have better flavor but I’m not confident they will excel in my climate

Would you mind posting how much you charge per gallon for PYO?

$25 this year including the bucket . Most customers overfill the buckets and we don’t complain.

Many other farms in my area sell by the pound but their bucket price would be close to $40.

Wont take many of these to make a gallon 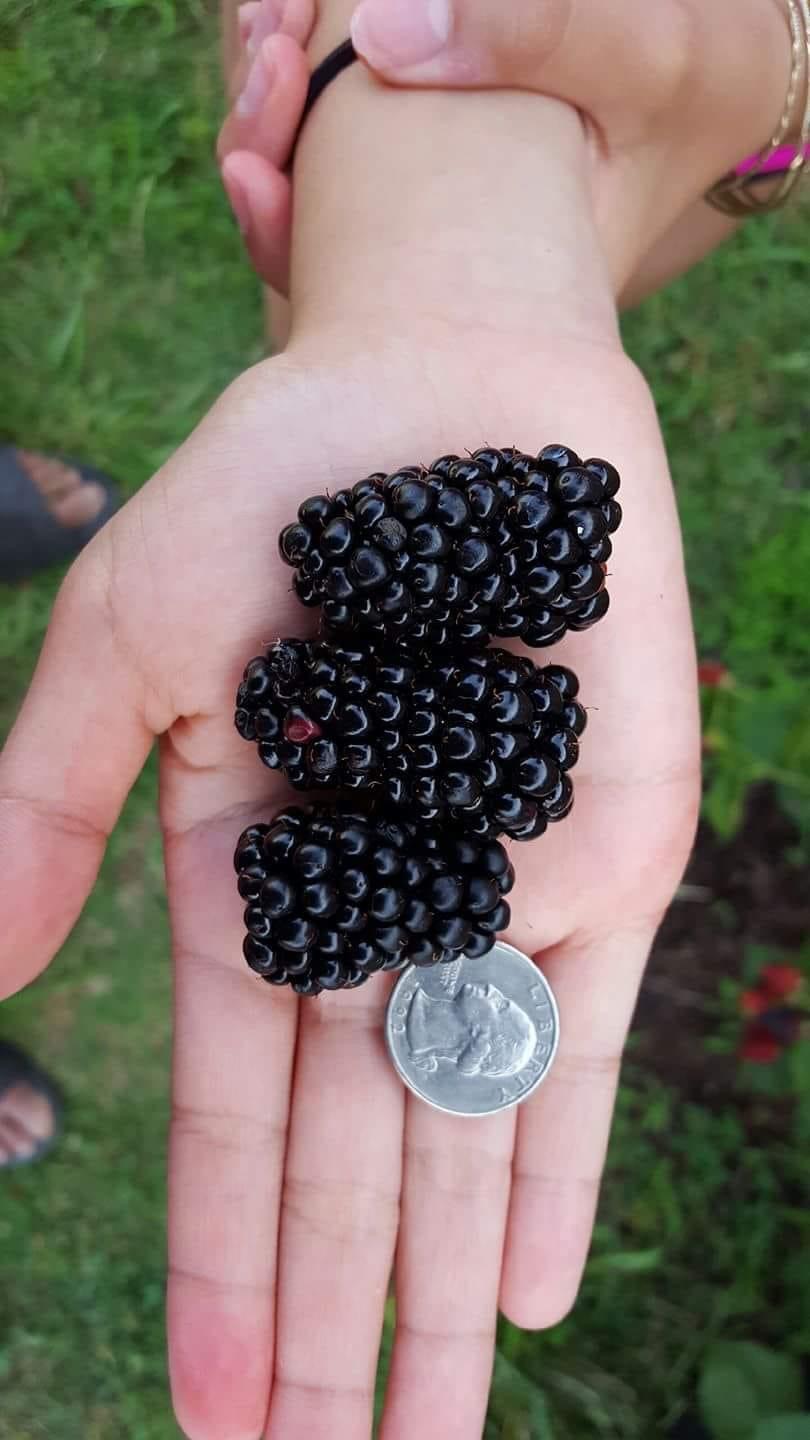 Those are huge and customers really like big berries!

How are the thorns?

Wrong guess! In any case the berries are fantastic and look beautiful.

Apache ripe already? Interesting… I’m south of you and I don’t have any variety ripe yet. Green and still at least a few weeks away. That goes for Apache, PAF, Kiowa, Triple Crown, etc… I do not as of yet have any Ponca.

None of my blackberries are ripe either, some are turning red, but it’ll probably be another 2-3 weeks before we get any ripe ones.

Same. I’ve got a few varieties including Apache and they just started to color up a few days ago (STL - Zone 6b). My whole row is in the shade for more hours in the spring due to the a 20ft retaining wall and the sun’s orientation, so I guess that might play a role. If I were to guess, I’d say they get 8 hours of sun in the winter and 14 in the summer.