Blueberries…a couple or the Patriot variety only 12 to 15 inches tall…but dumped from deep quart containers instead of bare root…so we should be good. Other blueberries look good.

Antonovka and B-9 rootstocks,the nicest I have ever received from anyone,
B-118…ten of these were ordered…and ten B-10 were substituted.

I’ll give 'em an A- this year, about the 10th time I’ve ordered from them since they were founded.

Got my order this evening and I am pleased with it

The 20 Bet rootstocks are a little more sparse on roots than the Bud 118 but still plenty to work with!

Some of the Bet 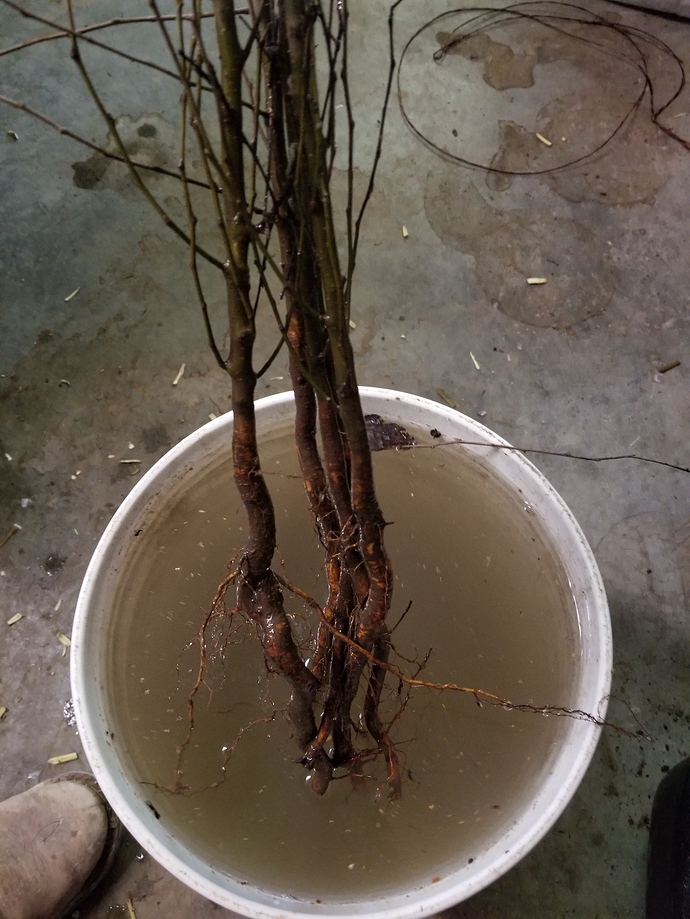 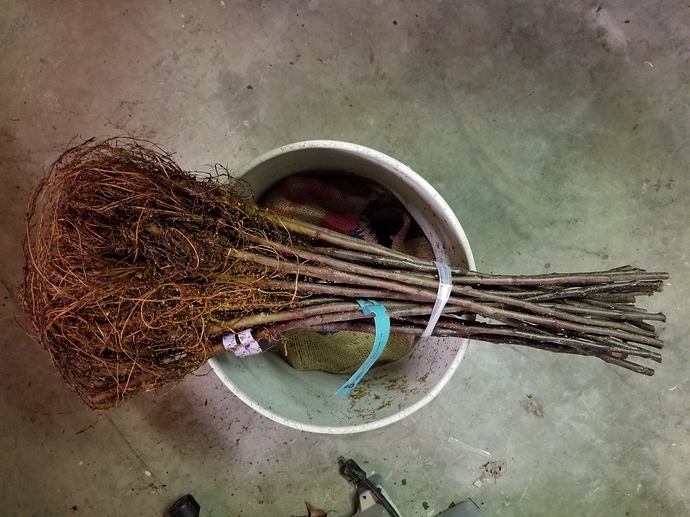 I started grafting some pears this evening and will try to get a lot more of them tomorrow evening and hopefully finish!

did you get the $5 liner honeyberries or the larger ones? If you got the liners, would you mind sharing a picture of how they arrived? I believe they were Indigo Gem and Indigo Treat.

I have a “dumb” phone. Not able to take and post a pix at this time. Technologically challenged, but I read, write letters and make phone calls–stuff the younger folks don’t do.

I will say, “liners” are a known commodity, as I’ve ordered “liners” of hellebores, liners of black-eyed-susans, liners of hibiscus, liners of redtwig dogwooods, liners of butterfly bushes, etc. For someone ordering something called a LINER, if they were unaccustomed with what to expect, they would probably be greatly disappointed in the honeyberry liners.

It means, with patented varieties I’m not supposed to root cuttings — so somebody else has done that first year of “TLC” with the cutting. And I put it in a PINT sized pot, and might upgrade to a one gallon in mid summer if the growth is sufficient.

Pint-sized plants of some other variety I got from a Wisconsin nursery last year went into a one gallon when I received them.

I’ve purchased “liner” sized plants before. I was just curious if what they ship as liner is similar to what I’ve previously received

I’m bridging the gap between youngsters and, ahem mature people. I can’t say I’ve written many letters recently but I recall the skill well. I can take pictures and send them, but all those filter things are a mystery.

Best case scenario for me on these $5 plants would be 2-3 stems and 2-3 inches tall. Anything more than that and I’m over the moon.

That brings back the memory of the Cow jumping over the moon in the nursery rhyme!

My little plants have minimum 3 stems and average are about 3 inches tall, one might go 5.
So, like I said, they were all I was expecting them to be. (If I don’t forget to water them when needed, they’ll be at least 5 or 6 inches in both directions within 8 months.) I am sure some could get more out of them in a greenhouse with foliar feeding, etc, etc…but I’ll do a little slow release fertilizer and that will be about it on mine.

I got a honeyberry from Berries Unlimited like that 2 years ago. These will go into that same bed and I should see similar growth, hopefully, as that earlier plant.

These plants really like composted rabbit manure and a bed of wood-chip mulch.

thats all i do to mine except i use chic bedding.

Having been a volunteer tutor to first graders about 50 years ago, and having taught English briefly at the university level, sometimes I find it easier to assume someone knows less than they probably do…and begin my ‘lecture’ with the lowest common denominator among the class. Sorry, Chills, if that practice on an old pro like yourself, rubbed you the wrong way. My apology.

I have taught classes myself for over 30 years, starting out at a low comprehension level and working your way up is a good thing. Even with college students one cannot assume a consistent level of background knowledge in simple things like geometric figures. I was shocked this year that not all high school students know that a rectangle has four 90 degree angles.

Also I haven’t filled out my bio like you , and many others here, so you were responding as though to an unknown quantity of knowledge.

Burnt Ridge order went off without a hitch.

CUMMINS shorted me three trees! (And I don’t see a topic where anyone has previously reviewed Cummins.)

I called 3 times, left a recording once. Followed with an email…without a reply so far.

This happened in a.m. today.

Box was only 2 feet tall…so obviously there weren’t trees in it even before I opened the thing.

Items are all on the packing list, but aren’t in the box. Box says 1 of 1.

(Finally got all the Cummins order…3 different shipments)

Got a gerardi mulberry from Burnt Ridge on Saturday. Looks healthy. About 11" tall. 1 gallon pot. Root system was pretty nice and not tightly bound. Would order again.

I gave my neighbors permission to pile their rabbit manure next to my compost pile. It looks like it’s mostly wood shavings with a bit of manure. I anticipate it will be at least a year before I can use it.

the bunny droppings will melt away and be gone well before that (next year) if you get a rainy season.

Rabbit droppings are considered a cold manure, they don’t burn like other fresh manures. (of course you should use them in moderation…)

Great info Scott, thank you. I’ll just use them as topically applied mulch/compost. Glad I posted, I wouldn’t have known!

I think I’ve probably gotten at least 50% of my plants from burnt ridge over the years. 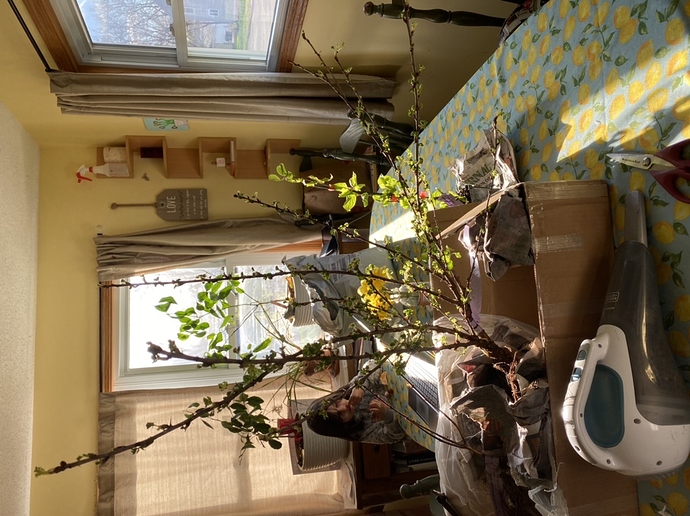 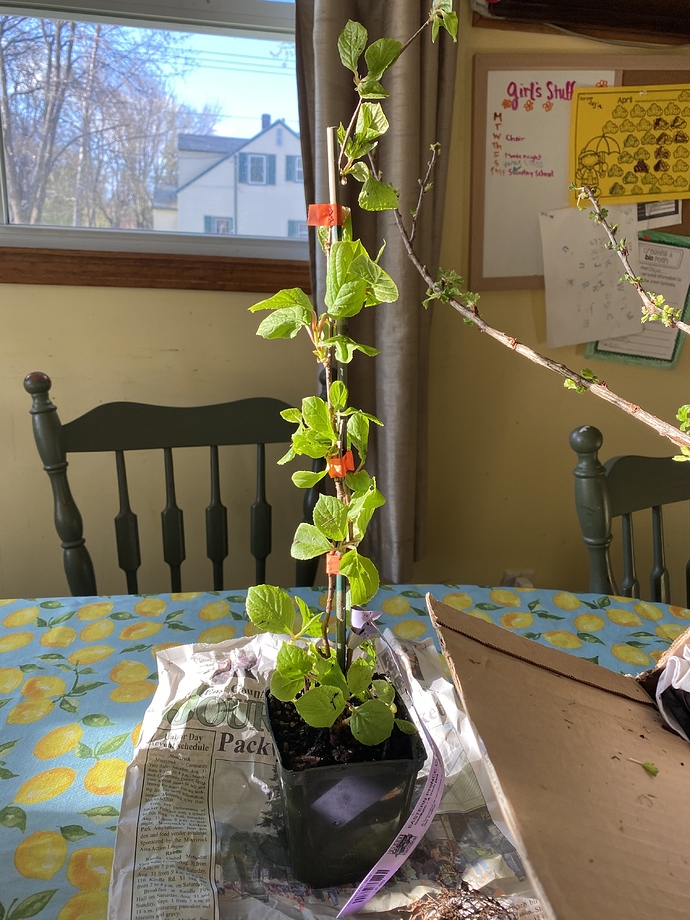 Honeyberries and a grape are little sticks but ok 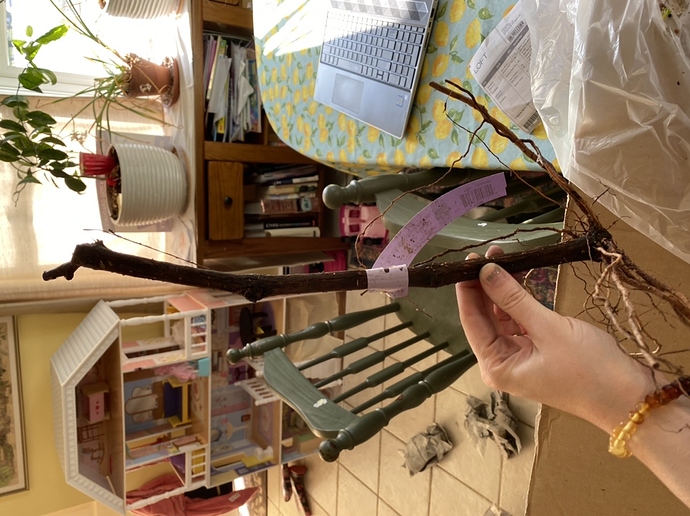 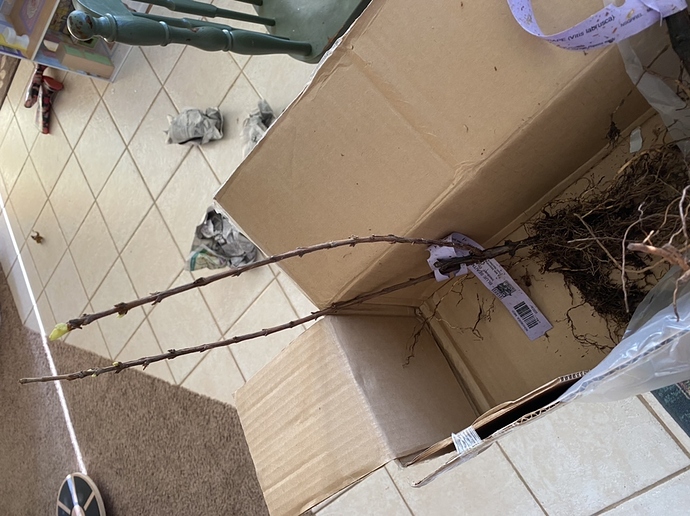 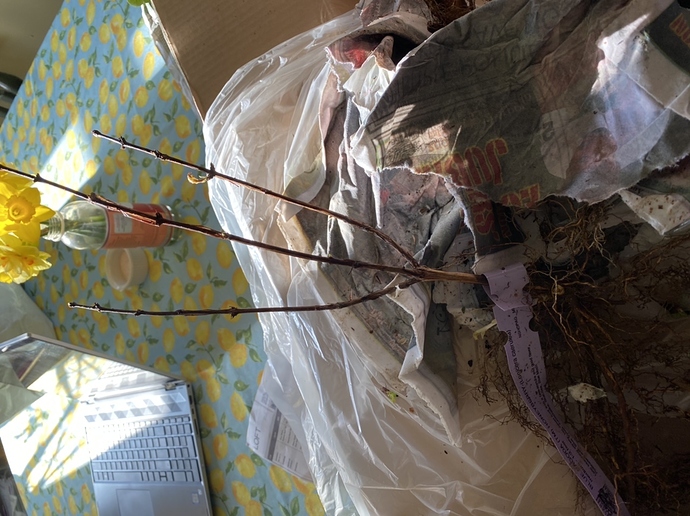 Been ordering from Burnt Ridge for years. Had my first real failure…Kanko Bai Ume. They sent a bent, sad whip and it did leaf out but now most of it is brown. I did order and plant their Shiro Kaga Ume and that one has done great.

Contact them, they will make it right. At least that has been my experience. Send a picture or two if you have them.

OK just emailed them. We’ll see what happens. Since it is early May and trees are in active growth in my area right now, not sure what they can do for me this year.