Today I halved one of my unripe rotten fruits. This copy also is another seedling Flavor King. It looks completely different than my second seedling FK which I have showed a few months earlier.
as you can see, this cut open unripe fruit has already many similar characteristics with the fruit, from whence he came.
Both, in and outside I see agreements, or am I wrong? in a few weeks, these fruits are ripe.
I hope for a look-alike, that’s for sure. 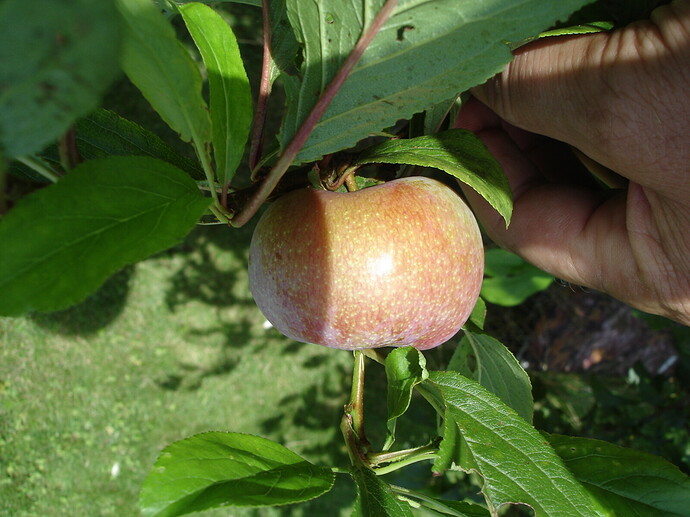 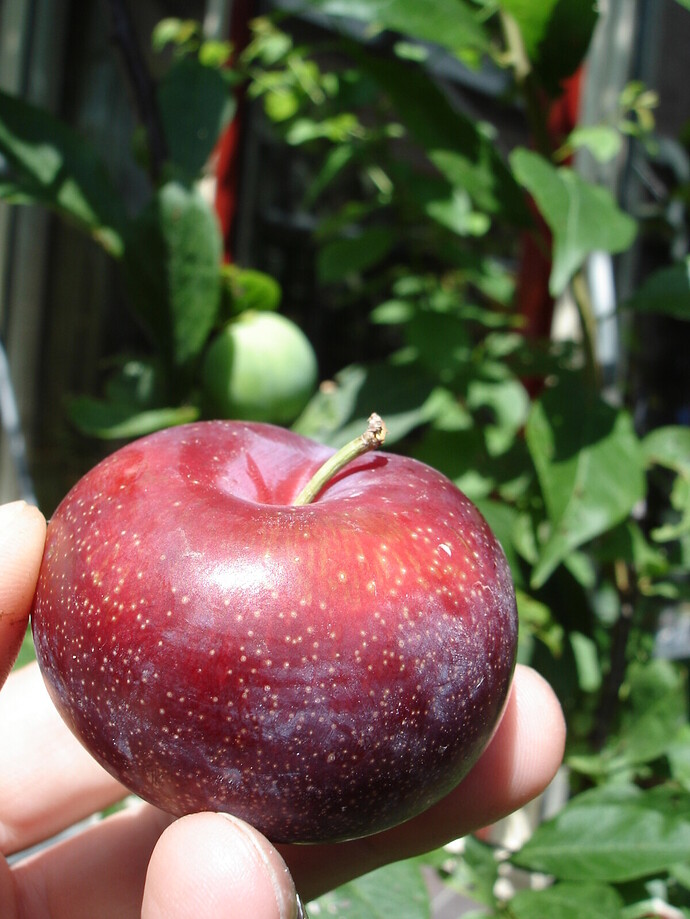 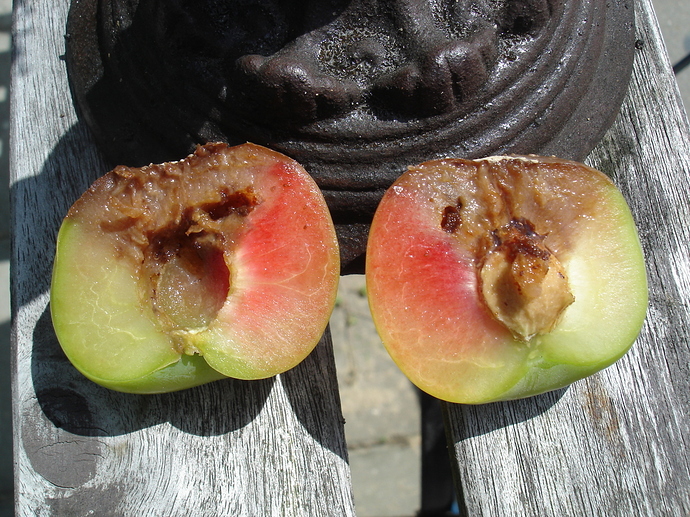 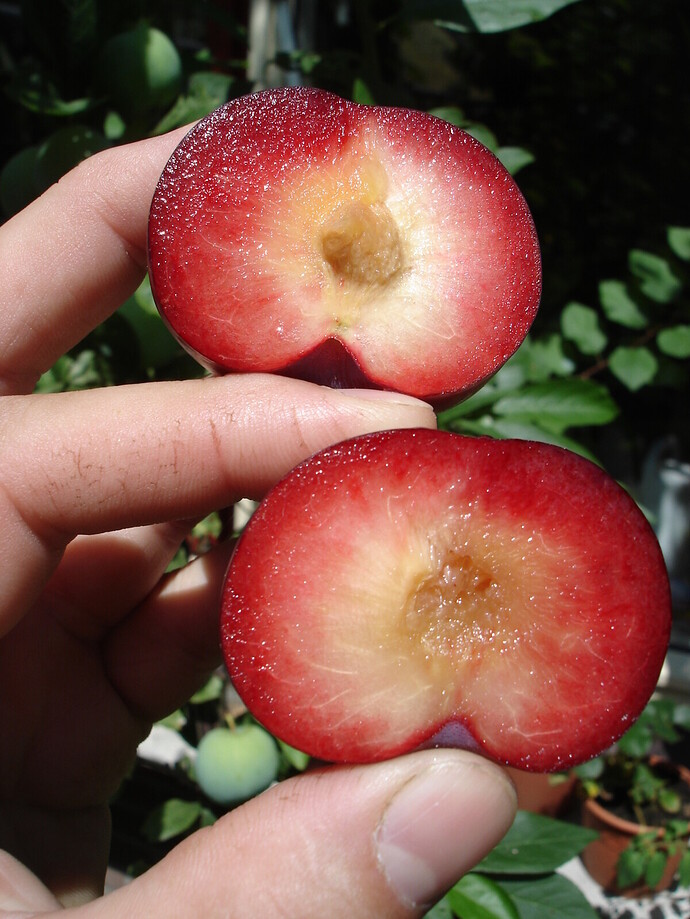 How long does it takes for your FK seedlings to bear fruits.

Four Years, Tony
They grow on their own roots

Did you have lots of sterile seeds? I always thought the seeds from such hybrids were very likely to be sterile. Or maybe that is just a marketing ploy to keep others from trying to make crosses…

Scott,
Had eleven seeds to sow all seeds have grown up.
three of them now produce fruit in the fourth leaf.

I am convinced that with a little luck it is possible to success with seedlings.

Pluots in my country are still fruits coming from another planet. Very rarely they are offered, so that’s why I am trying to develop my own pluots by seeds.(sigh)
So far it looks promising.

Had eleven seeds to sow all seeds have grown up.three of them now produce fruit in the fourth leaf.

I am convinced that with a little luck it is possible to success with seedlings.

Pluots in my country are still fruits coming from another planet. Very rarely they are offered, so that’s why I am trying to develop my own pluots by seeds.(sigh)So far it looks promising.

It does look promising. Keep us posted on your results.

fruitnut:
Thank you for the encouragement, I will continue to post my results.

Since FK is off patent, try to cross it with a peach.

I believe you are free to use patented varieties as either parent of a new variety unless you’ve signed a non-propagation agreement that prohibits it.

Meanwhile my FK seedling fruit start to mature. However unfortunately sometimes a worm is present in the fruit.
The sweet taste with a typical aroma that reminds me even any since to sweet cherry is present.

Despite the young age off this three, I am pleasantly surprised with this result.
All of may other four-year seedling varieties will come slowly to maturation now, about this, I also will report soon . 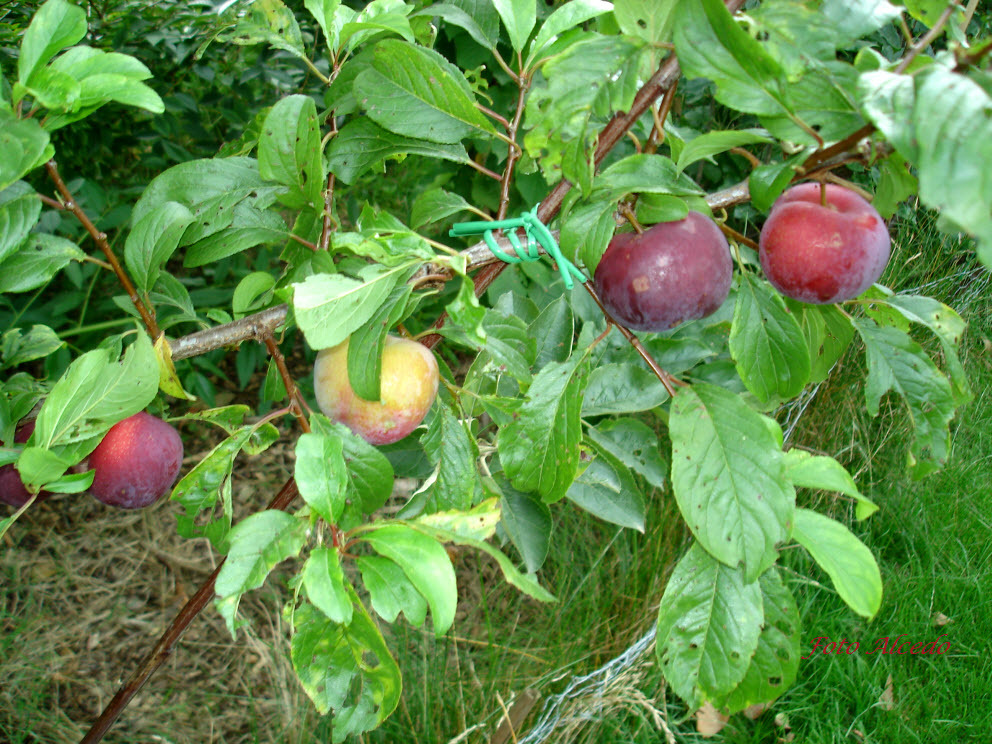 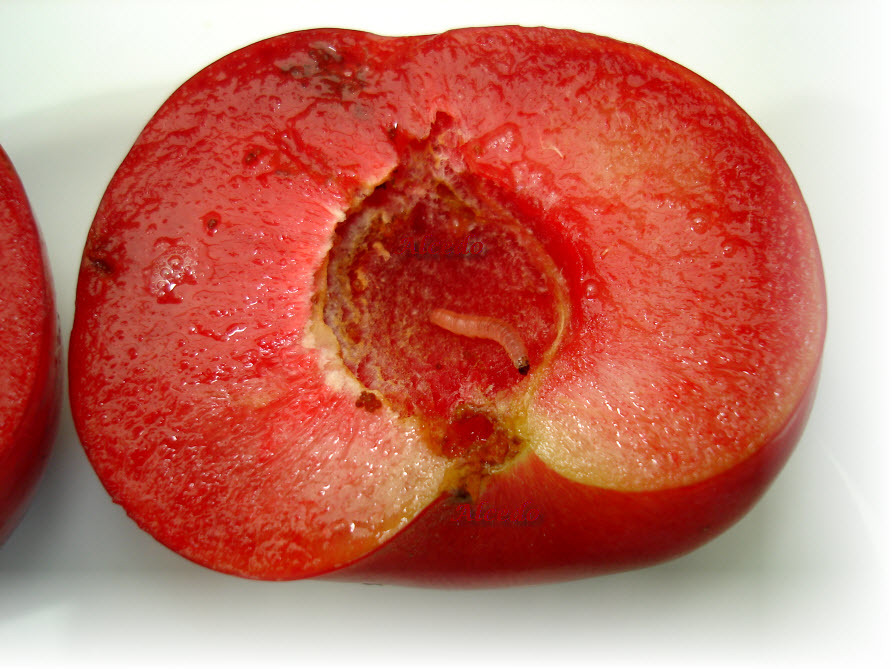 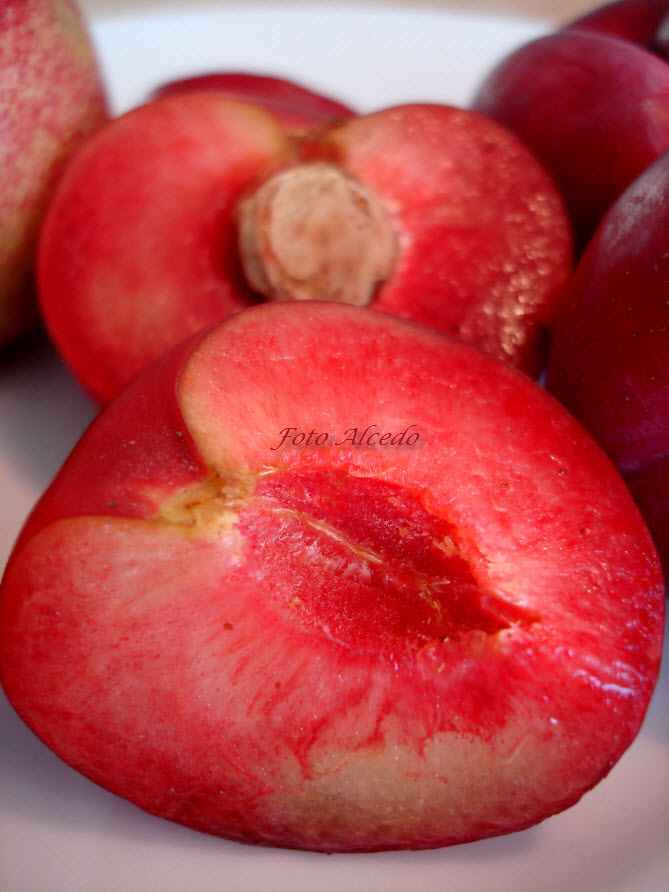 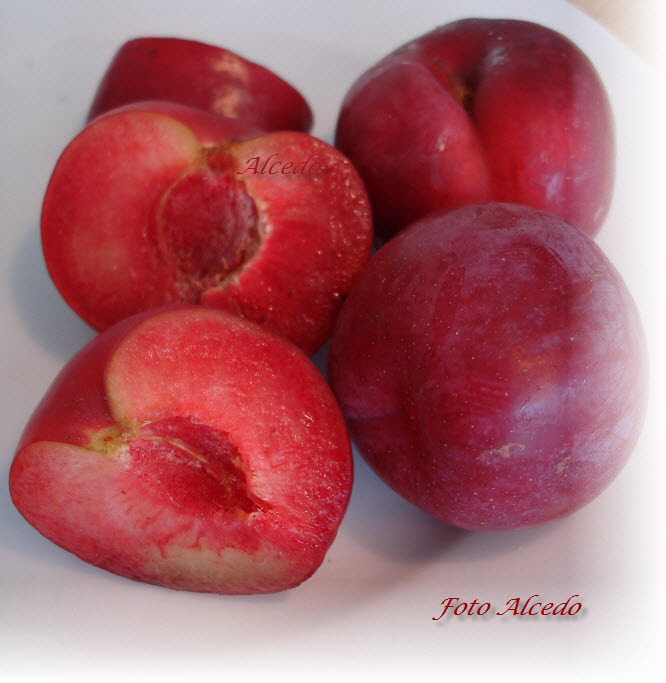 Looks super delicious! That’s a BIG WOW to get to this stage from chance seedling!

a very good taste, the worms also eat well of it.
Unfortunately I have renounced spraying. 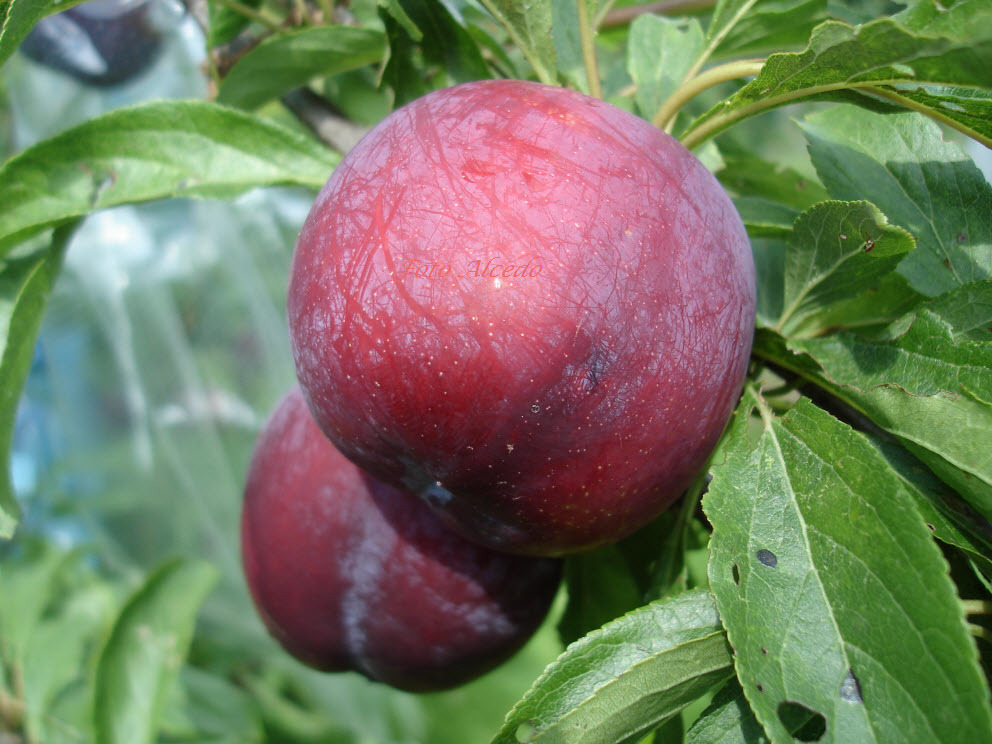 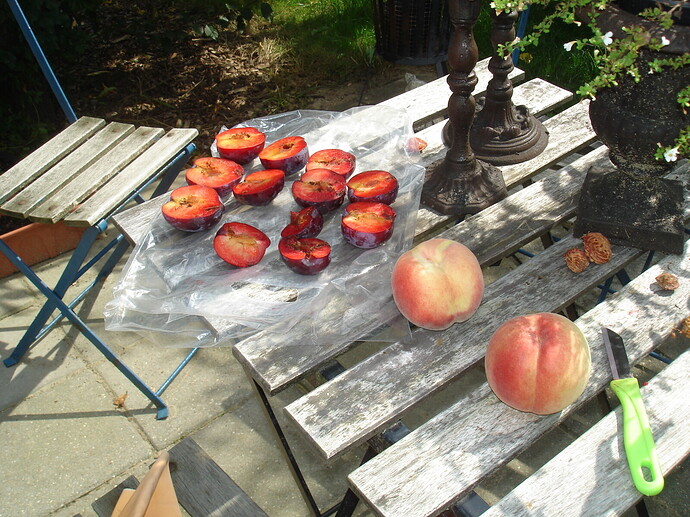 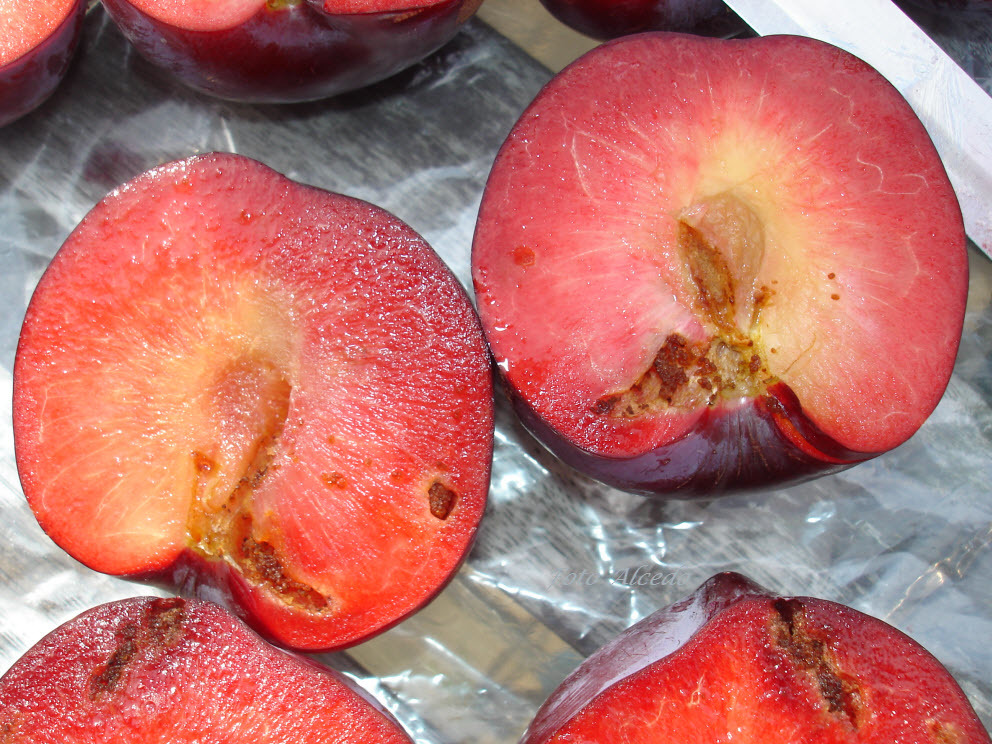 Alcedo,
The fruit looks very promising! What will you graft the seedlings on? One trick many of us do is grow rootstocks very large and then top work with the desired variety. That cuts down on the time it takes from growing seedlings to those seedlings producing fruit.

@ clarkinks Thank you for this fantastic idea.

At the moment al of my fruit-bearing seedlings still growing on their own roots, I’m just wondering how these trees develop
in the meantime I can figure out which rootstocks might prove suitable for these Japanese Plum variants…
If I am not mistaken, both European as well Japanese species are compatible with each other? Or there are no doubt exceptions?
I guess rootstock ‘Adesoto’ could be a suitable rootstock. Since my soil required special properties. pH value is too high.
Clay soil is often very wet but also extremely dry in a heat summer.

Kansas is very dry at times and very wet at others. Our soil is clay so it cracks during droughts down to a small trees roots or can drown other trees such as cherries when wet. The only apricots I currently grow successfully are manchurian and sweet pit. The plums I have good luck with are prunus Americana, goose plum, sand plum, Canadian bounty plum, wild native seedling plums. I mention these because American plums for example make great rootstocks for many plums and other stone fruits. I don’t know a lot about FK but I know if I was in your position I would plant 10+ rootstocks and graft my best FK seedlings to those which will save you years of growing trees out. If each graft takes an inch of material you could produce 100 very nice FK seedlings that would be producing in a fraction of the time. Duplication also allows you to back up a variety you might lose otherwise which your aware would cost you years of work and is possibly irreplaceable. This is what I know about compatability grafting Compatibility grafting?