Found me an overprized bearberry bush!

I am such a sucker for the oddballs. Now that my trees are getting bigger I’m looking for ground cover for the under canopy and these guys have been on my radar for a while. As I went to a nursery to pick up a choke cherry, and picking a different variety of Saskatoon I didn’t have, I spotted a pot with a bearberry bush! 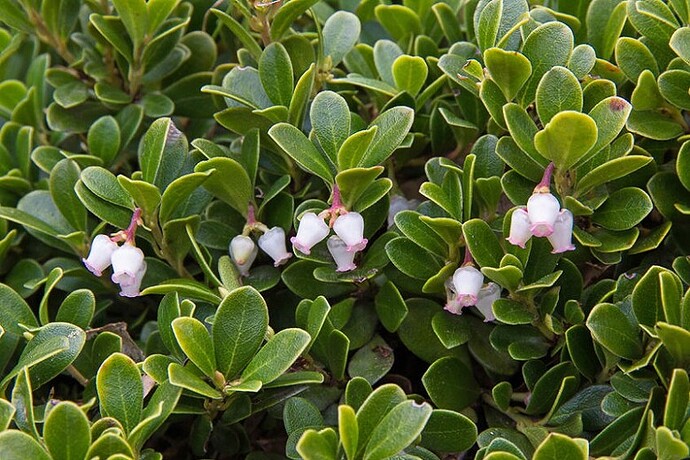 Stock photos off the net. The bear berry, Arctostaphylos uva-ursi, or kinnickinnick among friends, has a branch structure that makes it stand tall and proud at dizzying heights of 12 inches off the ground… It likes to sprawl, it likes poor soils, it offers year around attractive colors. The berries are bland but you can fix just about anything with sugar.

Besides under tree ground cover I have plenty of sandy gravel spots. I’m about to start reproducing it and shoving it on corners nothing else will grow.

Didn’t know it was ever called bear berry! Around here we just call it kinnikinnick (or k’nick-k-nick); also didn’t know you could propagate it. Nice find.

They don’t like to be transplanted from the wild, but cuttings from wild plants work fine enough.

The real use for that bush would be dry leaves. They are very strong antiseptic for UT infections. But boy, they are so bitter!

Apparently they were also smoked before tobacco was available.

I planted some on the north side of a home in North Carolina a couple decades ago…never got a chance to see if the planting succeeded.

The bear berry, Arctostaphylos uva-ursi, or kinnickinnick among friends,

Around here we just call it kinnikinnick (or k’nick-k-nick);

We live in a rural area of NE Kentucky. There’s a small community (and creek) just north of us called Kinniconick. Wonder if it has the same meaning.

There have been black bear sightings in the area over the years, including recently. I wonder if the plant is known here.

Edit. Maybe not. From Wikipedia (take it for its worth)-

Found listed on French explorer maps as “Connoconoque,” the name “Kinniconick” is believed to be of Shawnee origin, either meaning “willow bark,” or referring to the supposed Shawnee word for a kind of tobacco, a mixture of aromatic leaves and bark. However, this is not certain.

Good questions. Around here, i.e. Montana, it’s said to be a word of native origin, and kinnikinnick is the way early Europeans wrote it down. Seems to me to be happy in wet, shady areas at moderate elevations -say, above 3000 feet- and I don’t know that I ever saw it when I lived in the Ozarks; I don’t think of it as a southern plant, but live and learn.