After several weeks of high 90s consistently and not a drop of moisture it rained an inch so you can guess I’m starting to see some fruit splits. Anyone else have some splits? 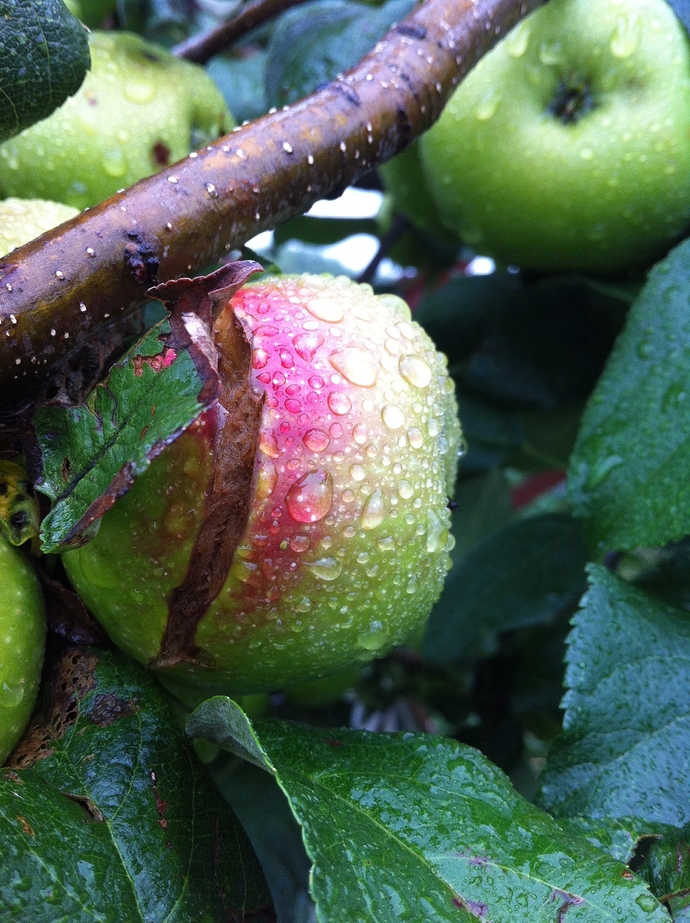 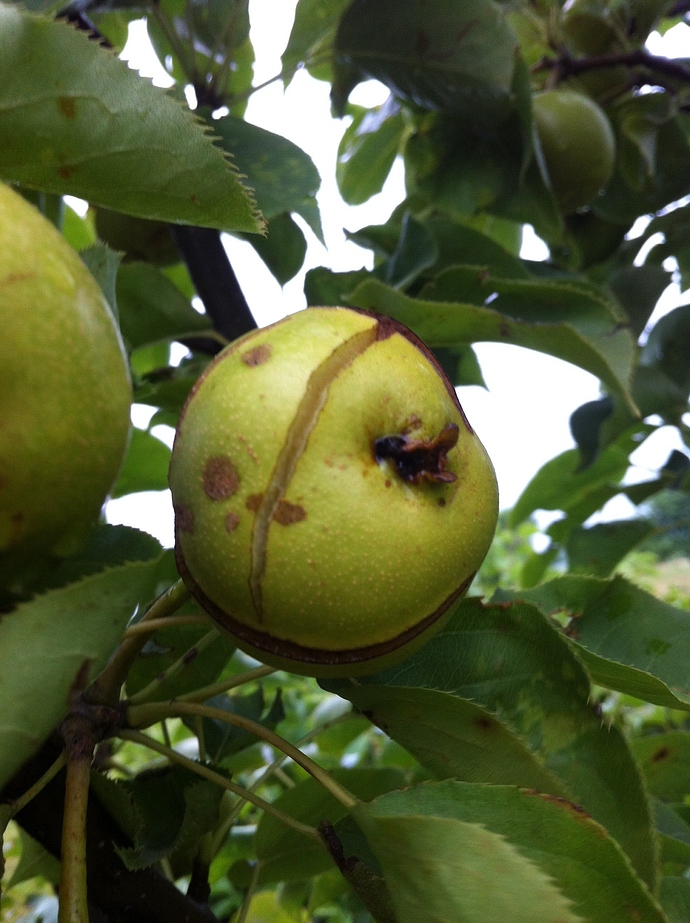 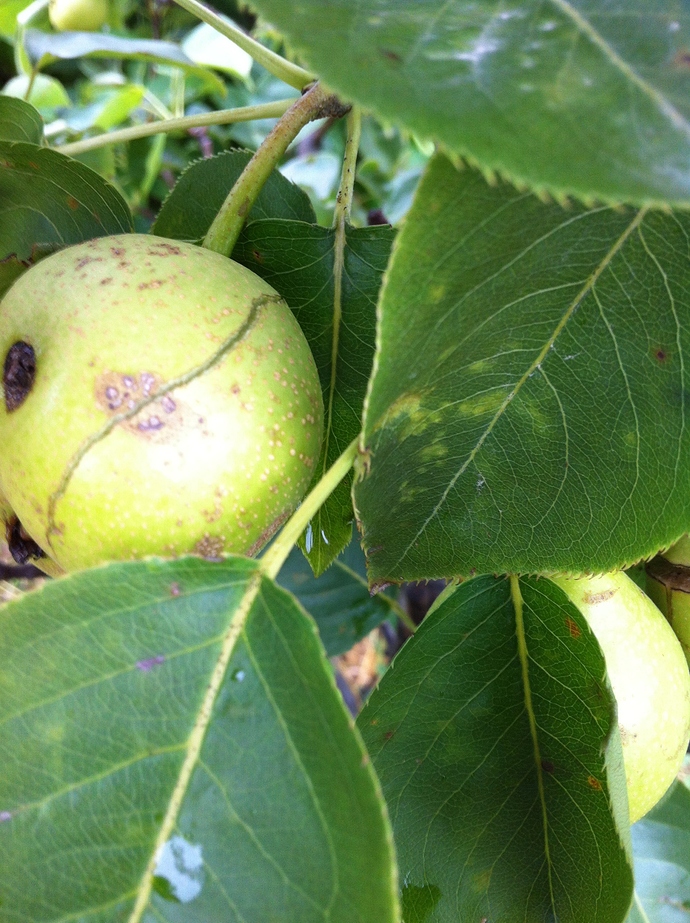 Almost all of my William’s Pride were split. I should have potted it up to a larger container plus we have had sudden swings of weather which used to happen more gradually here. I wonder if some varieties are more prone to it.

Quill,
I’ve heard overall Williams Pride is a very good apple. Our weather is erratic so I may want to rethink growing it. The cracked fruit in the picture is honeycrisp apple and drippen honey pear. Neither variety has split before and I’ve grown them for years.

Is Williams Pride apple known for splitting? I only had a few this year (seems biennial here) but all were split, badly. If this is normal for WP I will graft it over to interesting heirlooms in a heartbeat. Please let me know your experience with WP and splitting.

Ham,
My WP rarely split. My fruit split when there is an extended period of dry weather during ripening time. Then, of a sudden,it rains.

I have far more splits on my A. pears than on WP.

I’ve just found a few split Asian pears in my back yard yesterday. Of course, there were few down pours last weeks!

Sounds like we are all seeing splits this year. I’ve lost at least 25 Asian pears on 3 trees.

It seemed that the smooth skin type in my yard were more prone to split than the sandy skin type. These are the splits of the 20th Century (5 that I found this morning), versus Hosui (1)… Again, couple nights, there were many down pours. Another thunderstorm is threatening about now… 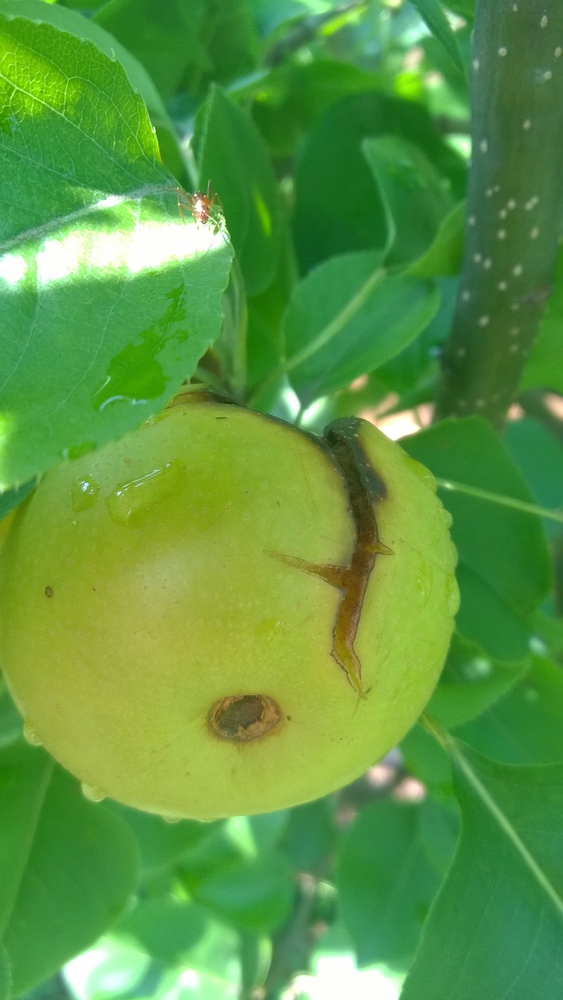 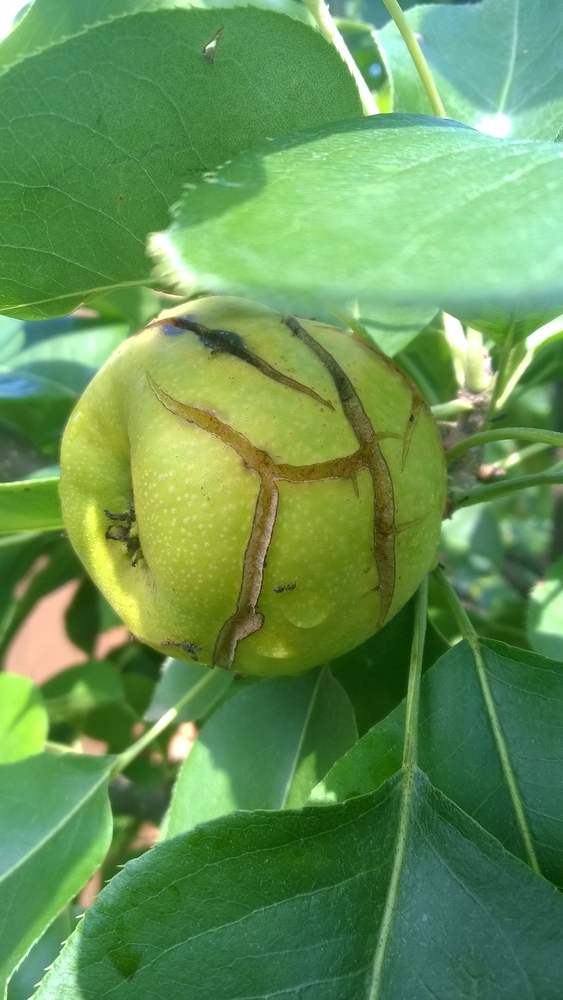 Looks identical to the splits we are seeing. Had lots of fruits lost to splits now.

I grafted over my 20th Century Asian to something else due to the yearly splitting during hard rain.

So is it true that smooth skin type are prone to split? Or you see equal problem for both types?

This is the first year that I ever see split in Asian pear. Or maybe I’ve never paid attention to this kind of problem before. I’ll have to see many more times before deciding what to do with it…

After having little to no rain for many weeks, it rained pretty heavily a few times since last Fri.

Yesterday, I checked my Korean Giant, most are in zip lock bags, I saw some splits. I did not want to be in a sour mood so I stopped checking after a few minutes

I think I’ll should go back and check them all to see which ones split more, the ones in bags or the ones without.

Mamuang,
Sorry to hear about the splits. Some with the minor splits might be ok.

I think I’ll should go back and check them all to see which ones split more, the ones in bags or the ones without.

Sorry about he splits. Now I’m curious about the bagged vs none bagged splits.

Mamuang, that is terrible news. The squirrels have been ripping my plastic bags off of my apples now pears, So I finally netted my pear tree today. We have still had little rain compared to you. No splits so far though (on my pears).

About 1/3 of my flavor king pluots have split due to all the rain we had in jully. And has watered down the flavor of my geo pride and others that are just starting to ripen. Hopefully we will dry back out and the kings that remain will reach a decent flavor.

Mrs. G.,
Good news, only a couple KG split. Both were in bags. I thinned them out. The rest look OK.