Bought these glue strips for a dollar at Walmart, they worked tremendously well for me, also got this chemical, works equally well for gnats. Strips collected thousands of them, just leave them lay in the pot for a few weeks. 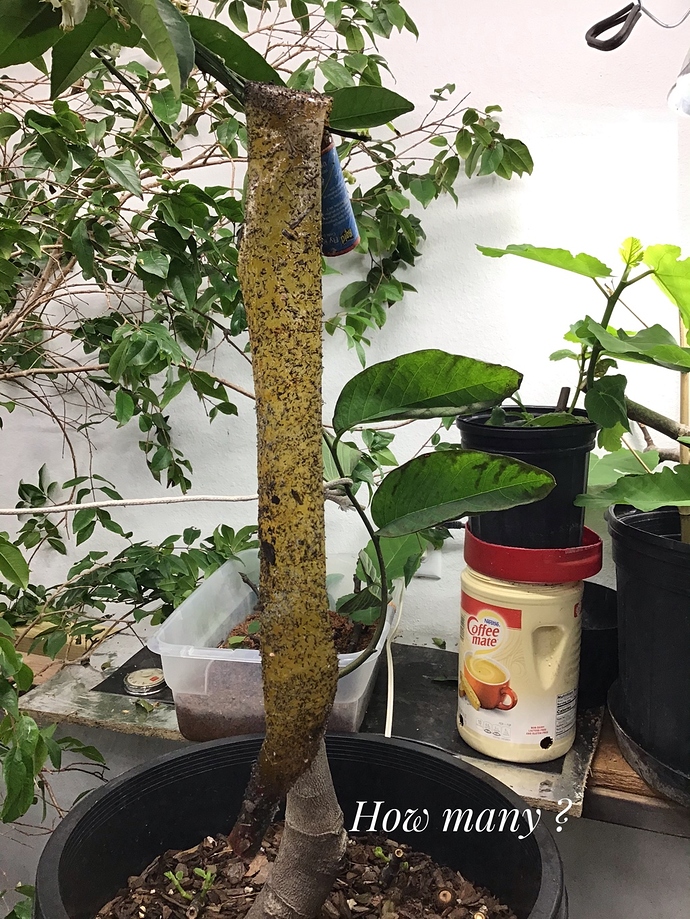 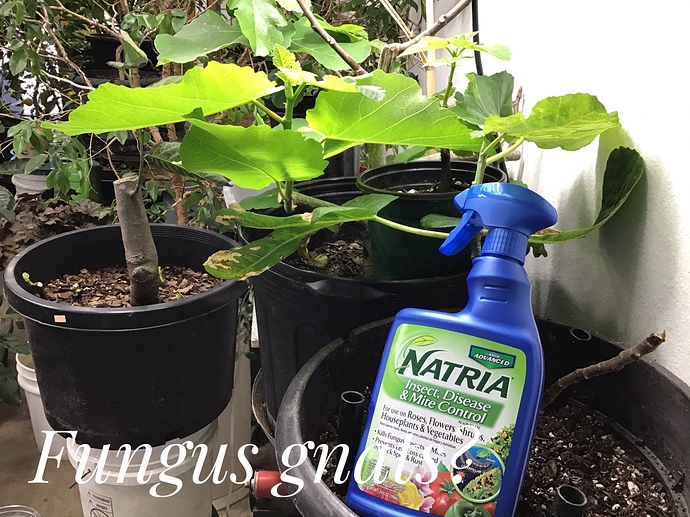 Yikes! Adding a layer of vermiculate to the top of pots can help too.

I’ve found if you lightly drench the surface of the pots with a 1:5 solution of hydrogen peroxide (standard strength) and water, it helps to crash the population, allowing the sticky strips to mop up the remnants.

The hydrogen peroxide breaks down into water + oxygen within minutes and doesn’t seem to cause any problems with the plants. I’ve read that it kills the larvae and also any surface funguses they might be feeding on in the soil.

I use Mosquito Bits (Bt) sprinkled on top of soil. Works for months.

Yellow sticky traps pretty much got rid of them last year, but I’m having a little more trouble this year. I think the root of the problem is that different batches of fungus gnats display different behavioral patterns. The ones I had last year were much more “flighty”—that is, they spent a lot of time in the air and readily took wing when pots were tapped or otherwise disturbed, and so they were much more vulnerable to trapping (or vacuuming!). These ones stick closer to soil and, when disturbed, are just as likely to crawl into a crevice as fly.

I’ve also recently noticed that (as certain studies have already demonstrated) Bti is only effective against very young larvae. The older, larger larval instars are little bothered by even highly concentrated Bti drenches. If you can drench frequently, of course, you’ll get them all eventually; if you can’t—as, say, in the case of young, overwintered citrus or other water-sensitive plants—then it’s more problematic.

I’ve thought about using hydrogen peroxide—and did in fact use it as a preventive when wetting some soil for some cuttings this winter—, but wonder how it might affect beneficial bacteria and fungi populations in the rhizosphere.

I have also released some predatory mites (Stratiolaelaps scimitus, formerly Hypoaspis miles) in many of my potted plants. Those plants that were most heavily sprinkled with mites have—and probably not coincidentally—shown less serious fungus gnat issues than those in which fewer were released. The mites are reproducing apace, so I hope they might eventually put the kibosh on my fungus gnat issues. If nothing else, they’re helping some and it was a positive dee-light to watch one of the fleet little dudes suck the sweet, sweet juices out of a writhing gnat maggot.

I’ve thought about using hydrogen peroxide—and did in fact use it as a preventive when wetting some soil for some cuttings this winter—, but wonder how it might affect beneficial bacteria and fungi populations in the rhizosphere.

I had the same concern, my solution was to only spray enough to wet the surface, but not the lower levels of soil, under the (perhaps incorrect?) assumption that the gnat larvae mostly hang out near the top. I have had one avocado succumb to root rot since I started occasionally applying hydrogen peroxide, but it was more likely a drainage issue I think, rather than an imbalance in the microbiome, but now you have me wondering…

I bought this thing and keep it next to my potted plants because nothing else worked. This does! 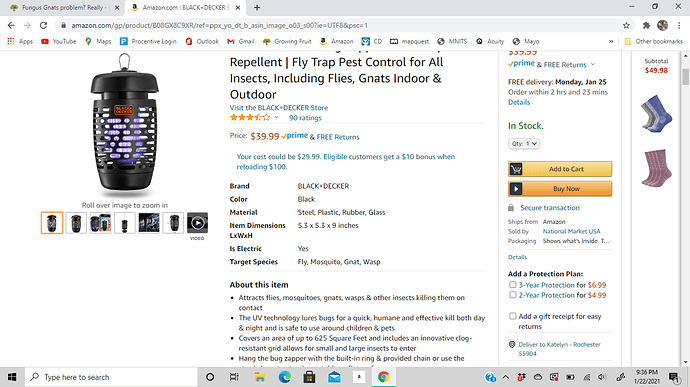 I like not having to touch the fly strip things or spray anything. Down sides could be that it uses electricity. And that it’s not pretty. But fly strips aren’t pretty either. And this lasts longer. Might even be cheaper over the long run, we’ll see how long it lasts.

put about a in. of D.E on the surface of the soil. the knats get killed when they hatch thru the D.E.

Interesting posts. I always have a few fungus gnats, but mostly seem to keep them under control with careful watering. Let the surface of the soil dry out well before watering again. Not saying that’s the cure, but I think it’s what has worked well for me.

Let the surface of the soil dry out well before watering again.

This is definitely my goal, too, but with ~60 plants ranging from 3" seedling starter pots to 15 gal nursery pots, all clustered together under grow lights, the gnats seem very able to find something that’s been watered recently enough that they can just jump from pot to pot as things dry out.