Was considering Bramleys on 890? End up with a biggie tree. I read 890 is used for low vigor scions and processing orchards…? Brams is so not low vigor.
Thoughts

I have Suncrisp on G.890. It isn’t hugely vigorous but it cropped this year. It was in its third leaf in my yard and I got a grocery bag and a half of apples off of it this year. Neither of the M7, B9, or G.202 trees in their 3rd year cropped this year.

My dad has Williams Pride on G.890 planted the same year and it is much more vigorous. It also hasn’t fruited at all because the Honeycrisp he planted next to his WP hasn’t grown enough to flower.

G.890 seems to have the push to grow a big tree. But I thought I read someone saying Bramley is a heavy cropper so that will calm it some.

I see Cummins has a lone G.935/Bramley in stock. As long as you aren’t planning to put many grafts on it, 935 is a good one. It may be a good idea to limit extra grafting to G935 because of its susceptibility to viruses. 935 looks to be smaller than M7 for me. Hard to say if I’d plant more 935 roots or not because I like to franken-tree all my trees.

Thanks vmuch Levers. I like yr point on heavy cropping, that would give me a strong structure im sure, with 890 giving it a nice push and early yield esp with Bramley’s.

How have crotch angles been on your 890s?

I was a 935 groupie until i started reading about 4-5 yesr old tree fails in commercial orchards, so that makes me nervous.

I have not forayed into grafting yet.

Im going to wait til next year for it. Hope they bud it on 890 again. Getting the obscure new cooker they have for this year instead.

How have crotch angles been on your 890s?

They aren’t noticeably different from what the scion wants to do. But I think it would take much more data to know. I’m guessing that the rootstock-to-scion transmission of branching traits is rather weak. Williams Pride on G890 is similar to WP grafted onto upright-growing Zestar on M7 roots. But WP is a variety that seems to want to produce 90 degree branch angles. Suncrisp on G890 still grows about 1/3 of its branches at a very acute angle.

If you really want the Bramley on 890, looks like they have some as of right now. 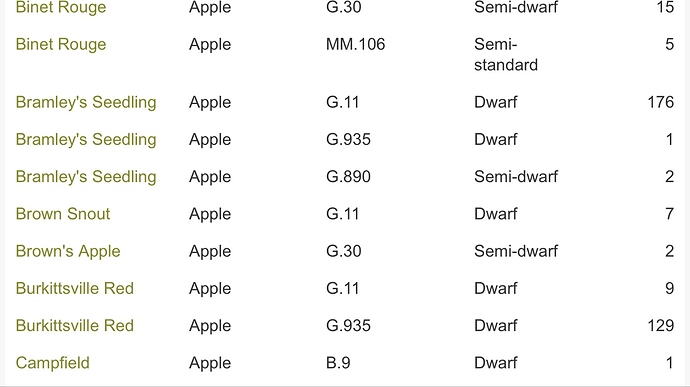