I know there is a lot of interest specifically in tomato tips so we will leave tomatoes to their own special threads. This will be for other veggies that seem to have less discussion.

I recently met a farmer who took a liking to me and he shared a few tips to grow larger/better veggies.

For celery - start from seed as you normally would. As the plant becomes established, put a 5 gallon bucket with the bottom cut out over it. Once the stalks catch up, slide another bucket on top of the first one, and repeat a third /fourth time as needed as the plant catches up to the bucket. If done properly, you’ll end up with 5-6ft tall celery stalks that are extremely tender. I suppose (although he didn’t mention it) that you could slowly remove the buckets to “harden off” the plant to make it more crunchy if desired.

For root vegetables, carrots specifically mentioned - dig an 18"deep trench, fill with composted manure (he uses cow manure but I imagine horse or other would work). Put a small layer of regular dirt on top and plant your crops as usual. You’ll end up with very large, very long carrots.

For cauliflower, keep leaves pulled up over the head until the head is too big, then put plastic or something over the center to make the head whiter and grow larger.

For onions, once established open up the very top of the bulb area (likely also using the manure trench method but not specifically mentioned) and they will grow much bigger with less resistance from the dirt (use soft fluffy soil too).

For proof that these techniques are effective, he said his daughter used them while in the Future Farmers of America, and she took her produce to various fairs and won prizes in all of them. 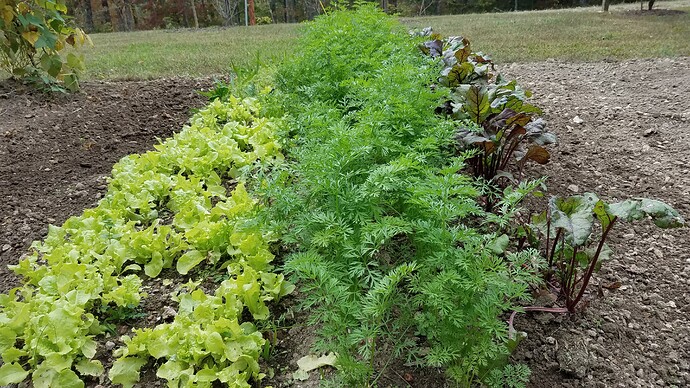 @disc4tw … I planted this little bed of greens and carrots late last summer for a fall crop. Black seeded simpson lettuce and some spinach (out of view on the other end) beets greens…

And on the carrots… I planted much like you suggested. I made a trench in that little raised bed 8 inch deep and filled it with compost… and planted a double row of carrots right on top of that… and they loved it. They were a shorter carrot 6 inch or so… but they grew so well… got a great harvest of nice straight good looking carrots by late fall.

I wonder if the bottomless bucket method would also work for leeks?

I read in Edward Smith’s Vegetable Gardener’s Bible that chilling pepper seedlings increases productivity. Once the seedlings have two sets of true leaves, move them to a location with 55’ ambient temperature for a couple of weeks.

My seedlings got plenty of chill hours this spring (one night I left them outside and it dropped to 35). Curious to see how they produce. So far, my cayenne already had a bunch of little peppers hanging.

I would like to see if it is his method or his soil. I have everything planted but I think I will do the onions like he suggests but only 1/2 a row to see if it makes a difference.

This was in Indiana County, Pennsylvania for reference. I seem to remember you had well draining soil so I imagine the manure trick would help with moisture retention in addition to pulling back a bit of soil on the onion crowns. I think the general idea is to reduce outside pressure on the bulb so it is more free to expand, i. e. compacted dirt =bad, fluffy dirt =good.

I don’t understand what you mean by pull dirt off onion crowns. Mine have always grown sticking above the soil. I start the seed indoors very early.

I think that what he meant was to pull the dirt away from the bulb (but not expose the roots) to allow the onion to expand freely without working against the soil.

I get composted chicken manure from a local chicken farm and that is all I use for fertilizer. The plants seem to grow like crazy and really produce good. Normally you can get it free or cheap though some save it to use on their pastures so you just have to ask. I used to get a 18 wheeler load for $20 now they use it on their pasture though they will still give me a couple pickup loads for free