Getting started with aeroponic cuttings

I’m interested in developing better reproduction techniques for hard to get started plants such as sour cherries, as well as streamline the reproductoin of easier plants such as haskaps, seaberries, and the currant family. To that end I have been digesting the gigantic " Propagating Carmine Jewel Cherries" thread (Propagating Carmine Jewel Cherries) but even with all the good information there, the multi year and hundreds of post makes it a tad hard to follow. I figure a new thread was called for.

So far I built a 35-cell with the often used Lowes 27-gallon tote, the one with the yellow lid and square pattern. I’m already working on the Mark II to correct some deficiencies (using a 17-gallon tote, same capacity, smaller foot print, better positioning of nozzles) but in the mean time this is what’s running:

I’m in Alaska so our trees and bushes are yet to wake up. I still have access to dormant wood.

first question: Why does everybody refers to these as a ‘mister’ or ‘spray vapor’ when the reality is that every single consumer level box i have seen uses sprinklers? I saw some academic studies where proper misters with a calibrated droplet size were put to a good use but for everybody else’s boxes, it looks like sprinklers. Am I missing something I’m not seeing here?

Once I get my timer/cycler, what would be a good starting point for cycling?

i have yet to experiment with aeroponics. I have good results with slightly damp coco-choir in boxes. So did not saw much need to get into aeroponics.

When i was contemplating trying it out i bought a “mist maker”
somthing like https://www.amazon.com/Fountain-Ultrasonic-Aluminum-Humidifier-Halloween/dp/B07Q3TXYMW/

I think they work with a high resonant frequency piezo element. Probably way higher then the piezo’s used as a buzzer in electronics, but same princeple.

as an alternative, have you considered root grafting? (digging up a root, cutting it in pieces and grafting it to some pruning wood. Don’t completly seal the graft watertight. The root enviroment is humend enough for grafting)

There are several aspects to aeroponic cloning that make all sorts of sense for me. For starters I’m in the matsu valley in Alaska. Our seasons are intense but super short; we don’t start putting much in the ground until end of May early June and by mid September we are done. Any system that can shorten the time between cutting and plants with roots ready to go is a huge plus.

Those ultrasonic misters require a ton of maintenance and cleaning and usually people use ro water for them to reduce maintenance.

A better system uses a high powered magnetic drive pump with the ez clone 360 misters or 180s with a pvc manifold or you can purchase the ez clone manifold itself.

That’s exactly what I have, the ez clone 360 ‘misters’. I assure you, it is a sprinkler, there is no small droplets being thrown anywhere.

I see where I did the math wrong. I meant to use 2 tablespoons per gallon (one ounce) ended up doing two ounces instead…

You need way higher pressure throw a 950 on the ex clone manifold and it will create water micro droplets by hitting the sides and cuttings.

This is much more reliable than the ultrasonic method

I went with the recommended ecoplus 396 GPH pump.

Is there a point at which a larger pump could experience a shortened lifespan trying to pump a low volume at high pressure? There is just so much water those sprinklers will let through.

Well thats why those ez cloners come with a 950 gph mag drive and higher the small ez clone comes with a 750 gph the eco plus 396 just does not come close to enough output to create micro droplets for more than just a few outlets right above it.

The mag drive pumps are much higher quality and pressure

I’m glad I got this thread started, I’ll keep an eye out for a 750~950GPH pump for the Mark II version of my cloning box. For now I’ll do my experiments with this one.

For hard to start hardwood cuttings such as sour cherry bushes, are you guys doing anything special before sticking it on the aeroponic box? I saw some people putting cuttings in coconut coir with a heat pad on cold tops in order to develop calluses. It wasn’t clear if they were doing this in conjunction with aeroponic.

FWIW I’ve never had a problem with mister maintenance - granted this is from their use with a humidifier, lol.

I would also look into the ideal water / air temp, because when I did hydroponics it made a huge difference in growth rate.

PH, how important is to monitor/manage?

Week 2 of my first aero propagation experiment. I did a variety of Raspberry, Gooseberry, Haskap, and Montmorency, all hard wood harvested dormant (I’m in Alaska, many things are still dormant here). I did use Clonex for nutrients, I did not use hormones. For the first week I was doing full mist then I got a timer and set it to one minute on / three minutes off.

Not the greatest picture but here is what we have so far: 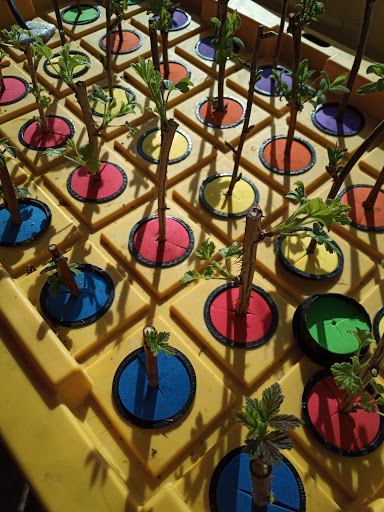 Tops look pretty great but I don’t have any root development to speak off.

One thing that developed is this translucent jelly like substance on some of the haskaps. It seems that it should be there? What is it?

I tried this approach with fig cuttings. It didn’t work for me. The ones i did in potting mix kept in a clear plastic tote had about an 80% success rate, where my aeroponics had no success. Hopefully you will see better results.

One thing to question, did you remove some bark and expose the cambium to the water? I have seen that recommended for rooting, even if just little slits down the wood.

You may have to check each kind of plant you are starting cuttings off and see if some need callousing first this method is definitely more for softwood or new growth for most plants. The ph does matter usually people try to do a very light mix of phosphoric acid and potassium bicarbonate to make a stable 6.0 water. Are you using any chloramines to reduce bacterial contamination? These are not the systems for cultured water imo. My concern with the jelly would be some form of bio film and if it were me my goal would be to keep your water sterile. Ideally when you get the cycle timer you can get the water temperature dialed in and constant

Thanks for the reply.

This is my first run. For the most part I’m running it so I can observe the process. I did a mix of plants so I can make observations across the board. For the next run with softwood I actually want to reproduce I’ll dial in my parameters better.

I have little expectations for the cherry, I have never tried hardwood haskap so we’ll see, and the gooseberry and raspberry are there because if anything makes it, it would be them. Sadly I have no use for more of either so it if works I’ll give them away.

Heck so far one thing I’m loving is that the previous setup I tested was soil with a dome. That required a whole lot more hands on, keeping the right humidity was tricky; too much and fungus would develop on the plants themselves, too little and the success rate would drop. With the Aeroponic approach they are looking great domeless, I spray some water on them just out of habit. I can really set-it-and-forget-it.

One thing to question, did you remove some bark and expose the cambium to the water? I have seen that recommended for rooting, even if just little slits down the wood.

On half of them I sliced off, half I scrape lightly with a blade. So far either is doing poorly.

By Friday this experiment is going to hit the 3 week mark. 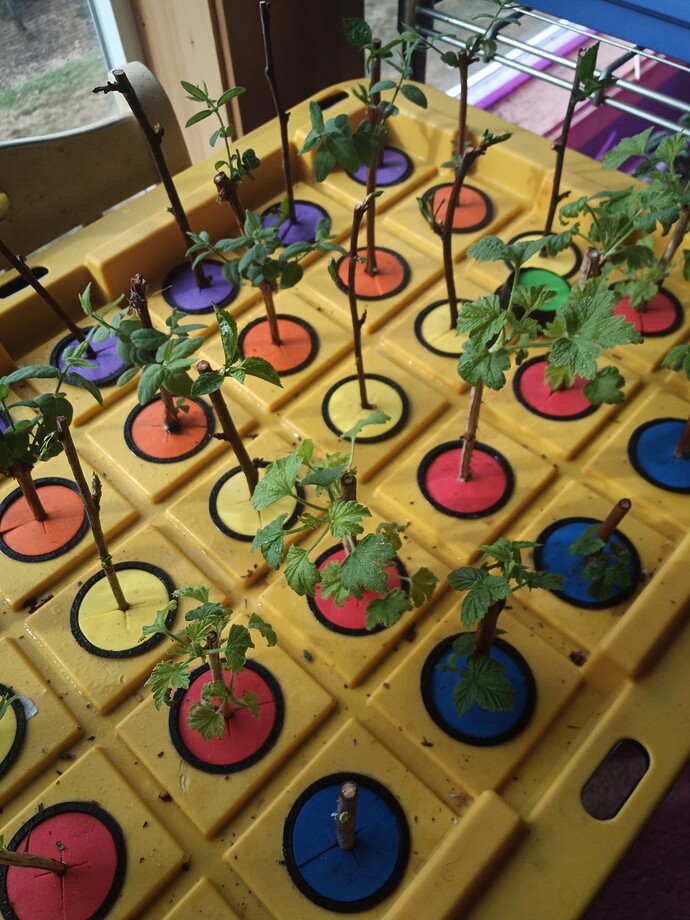 As you can see there is plenty of green development, all that lush greenery has been well supported without the use of a dome (a very promising thing as the dome requires more monitoring) but I’m getting 0 root development across the board. I would have expected the varieties that root easily to have something to show for but nope, nobody is rooting.

The end of today closes week five. So far Haskaps did splendidly well with 5 out of 8 putting out roots. Gooseberries look like is finally thinking about rooting, hard to tell. Raspberries, which I thought would do the best refuse to do anything resembling roots. Other than that they look healthy. Sour cherry are all pretty much gone.

When is the ideal time to pot them? The attached picture was from 3 days ago. A good number of roots but they seem fragile.

For the time I loaded water and nutrients on day one I have done nothing to the water. Is there a protocol for cleaning it after so many days, or adding something to minimize bacterial and/or fungal growth? 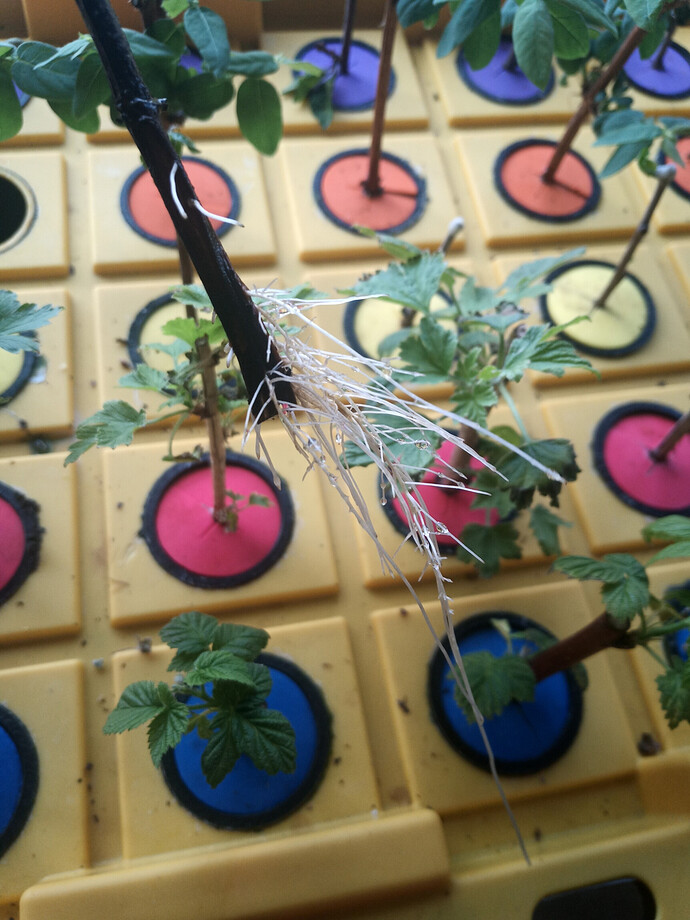 I’m surprised that there isn’t more interest here about this propagation method. Has it just been discussed too much and nobody cares anymore?

Transplanted the rootiest (is that a word?) of the haskaps. A berry blue; I didn’t have one of those so this is already a win. Got 5 out of 8 to root but I can see that on average the ones that rooted had well developed nodes, the ones that didn’t were from cuttings with smoother stems. I’m guessing that better cutting selection alone could cut rooting failure by half. I still need to test for pre conditioning (rooting hormone plus heat pad on cold garage for a few weeks) and for better growth parameters (did not use light, just window natural light) which should make this an ideal Haskap propagation technique.

Once I’m done I’ll clean everything so I can do another experimental run this summer with green cuttings of various other plants.

i have no experience with aeroponics. But with cuttings rooted in perlite or coco-coir i usually don’t want to wait to long to transplant. The roots seem to grow differently specifically for the medium they form in. And id be afraid the roots grown in water/air bubbles would need to adapt quite a bit to soil.

Thats also my main reason for a disintrest in aeroponics. I think it might root stuff a bit faster, but likely will have more transplant shock. And thus won’t have much of a head start of the (for me) easier rooting in coco-coir or perlite or a mixture of those.

misting the top of the cuttings, especially if it is leafed out seems very useful to me. I still do that by hand with a spray bottle. But plan to one day make a timed ultrasonic mister for that.