I just thought I would start a thread about growing giant pumpkins this year.

Last year I made a halfhearted attempt to grow an Atlantic Giant using seeds sourced from the local Wallymart. Ended up with a normal sized pumpkin at the end of the season. This year I am going to put a little more effort into it starting with known genetics among other things.

@Derby42 was kind enough to send me 5 seeds from the pumpkin that he grew last year, Jason’s Pumpkin. Two of the five were viable. 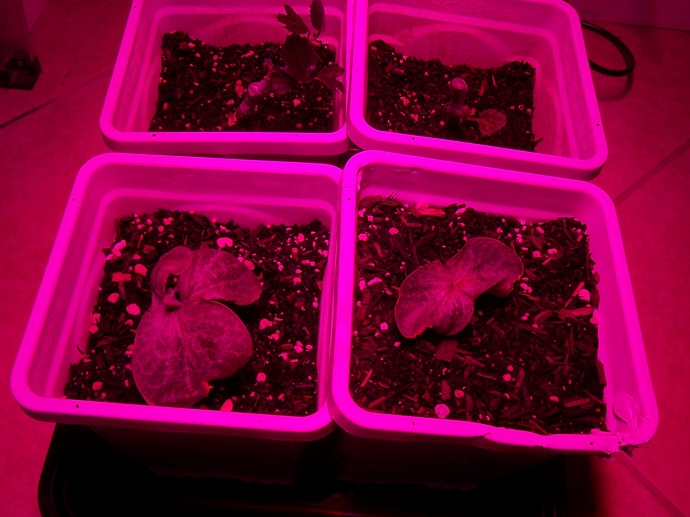 BEGINNING CONSTRUCTION OF THE BED 3/19/2018. Stripped topsoil for later use as raised bed: 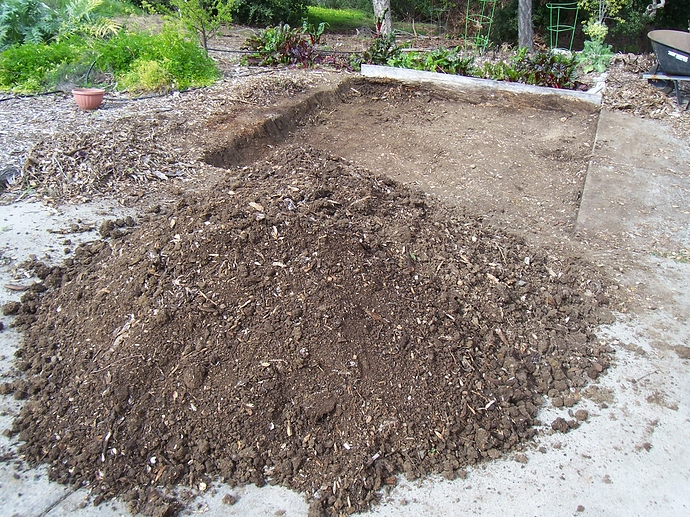 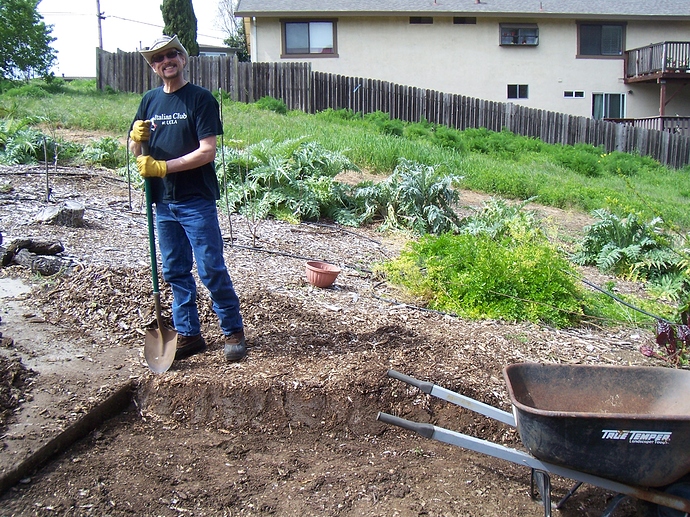 REMOVING COMPACTED GRANITE AGGREGATE BASE. Planting area used to be a driveway. Yikes!: 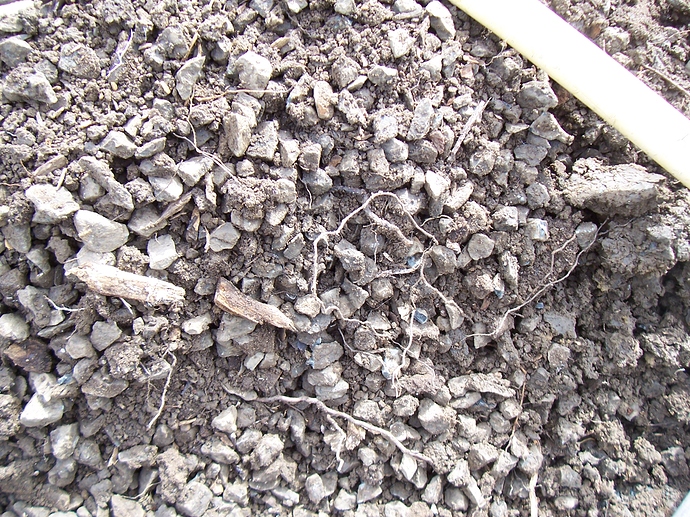 SEEDLINGS 3/21/2018. Lots of rain today. Can’t work in the mud hole outside. Plants are growing fast. I need to finish the bed soon.: 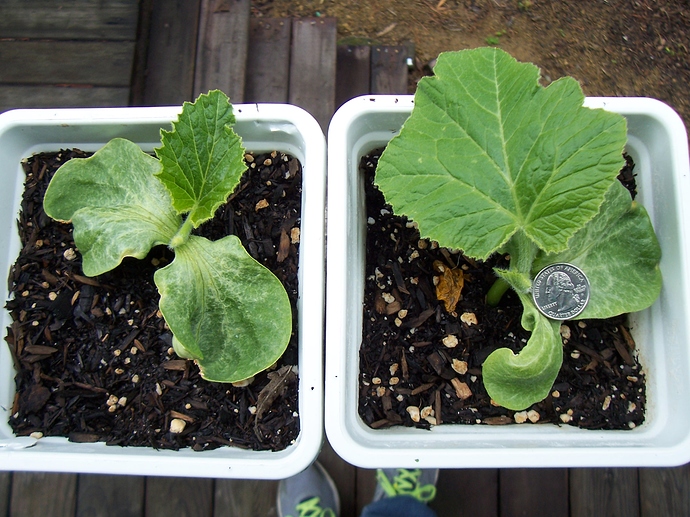 Those seedlings look awesome, Dan. I too plan on growing pumpkins this year- I’m no expert in them, and don’t care how big I get them, more of an experiment. Could I container them? What’s the best way to grow and any tips? Thanks in advance

Could I container them? What’s the best way to grow and any tips?

I plant cucurbita in the garden and ignore until harvest time. Very easy to grow, they tend to die off in the fall as the leaves become infected with powdery mildew.

Squash vine borers are a serious pest in some locales. Assuming you have warm fertile soil, no borers and plenty of sunshine you will be good to go. I suppose containers would work if they are fairly large.

Update 3/23/2018
Seedlings growing like crazy. I put them under sunshine during the day and LED lights all night.
Raised bed is done. I guess I’ll have to plant them out soon. 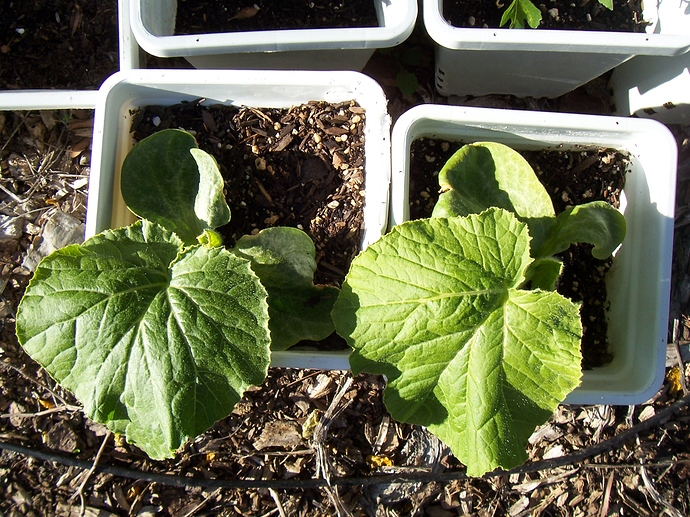 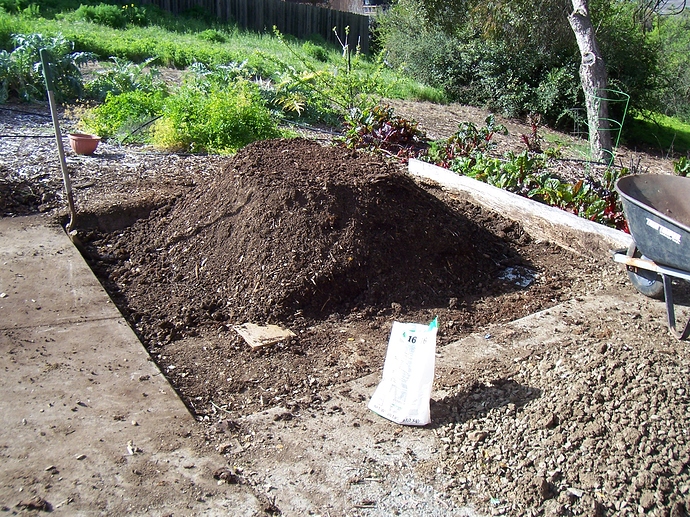 Update 3/30/2018
Warm weather in Northern California this week so the pumpkins have been moved to their permanent home. 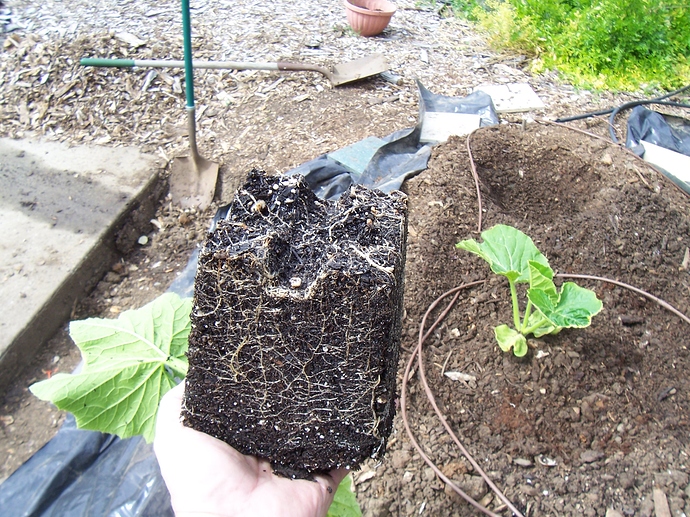 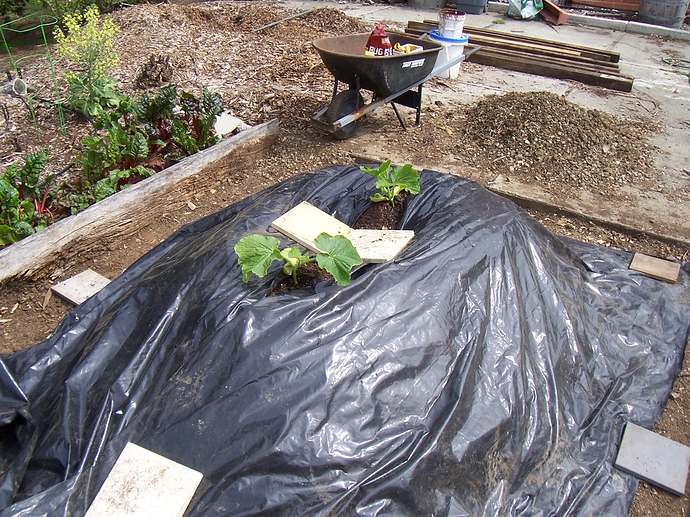 This guy unexpectedly skittered by as I was taking pictures: 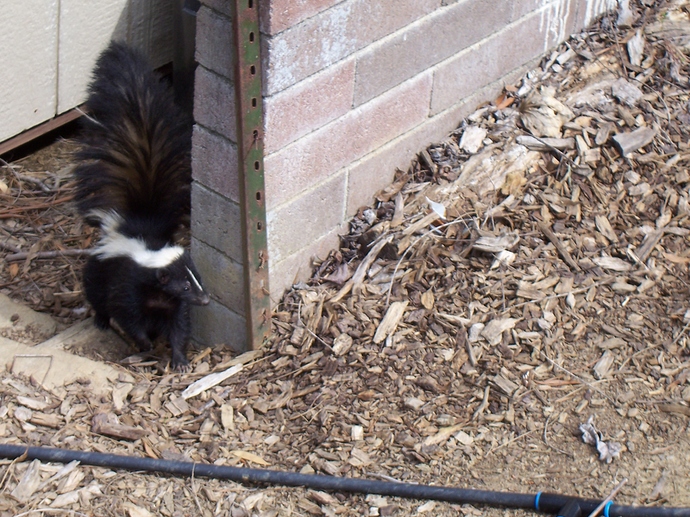 Those are supposed to be nocturnal!

Wow, nice work. I am looking forward to watching these grow! How big were the parents?

The pumpkin or the skunk?

Cold and stormy weather has returned to N. Cal. Low temp forecast at 41F but I think the pumpkins should be OK. Wind is raging at the moment as cold front approaches. They are growing reasonably well so far even with the cold nights. I think the black plastic is helping a lot to keep the soil warm. 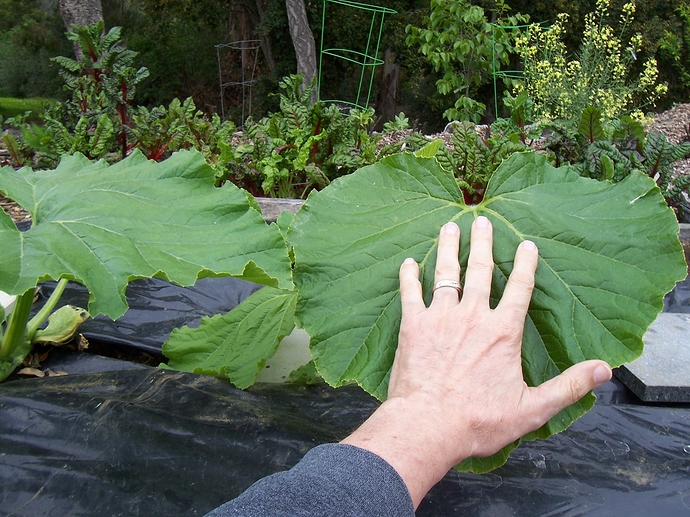 We had some stormy weather and very high winds last month so I built a temporary shelter after losing some leaves. Lots of male flowers bloomed.

The vines have split in a few locations from twisting in the wind. Doesn’t seem to slow the growth. They quickly outgrew the shelter so they are back in the open now.

Many female flowers opening and bumblebees are showing interest. Hand pollinated and bagged the first one this morning. 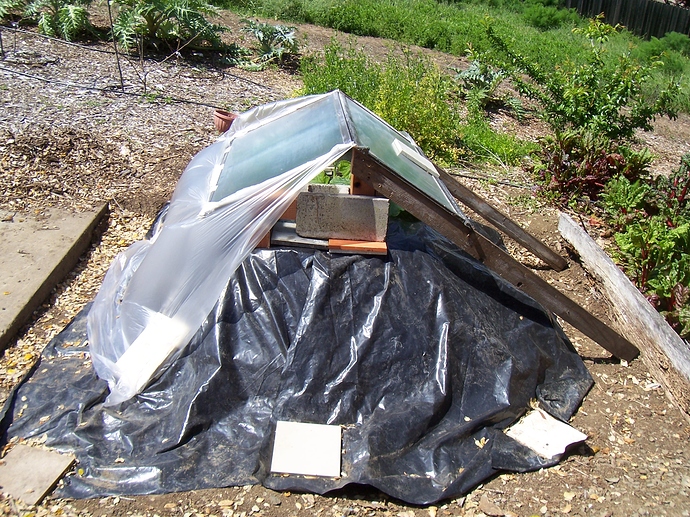 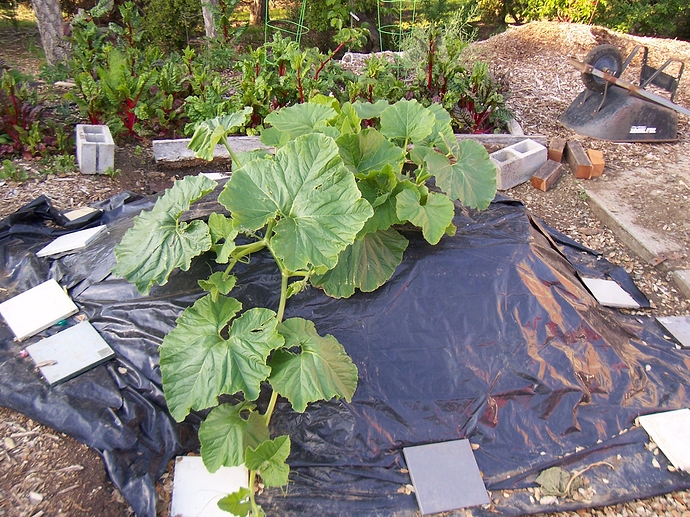 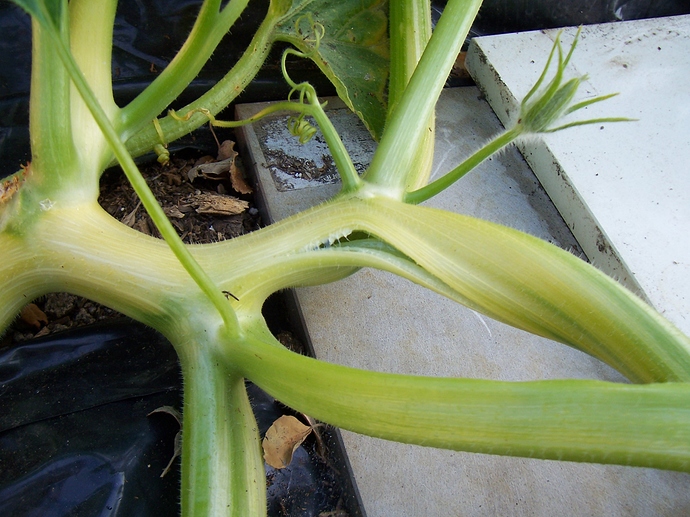 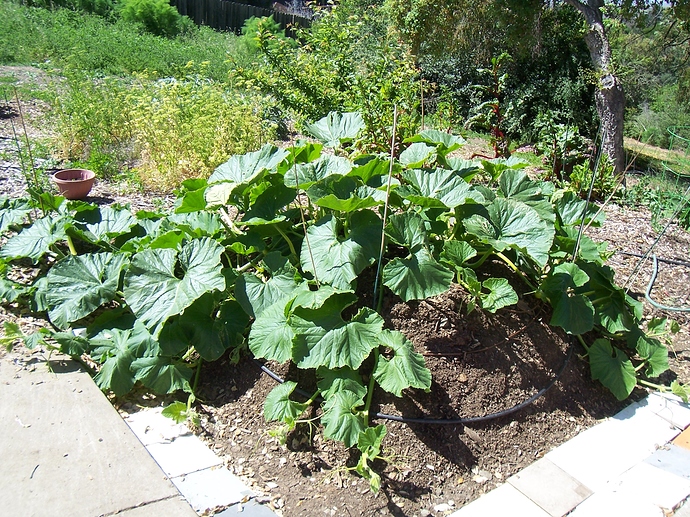 The females are showing up en mass. The large one was hand pollinated a few days prior. 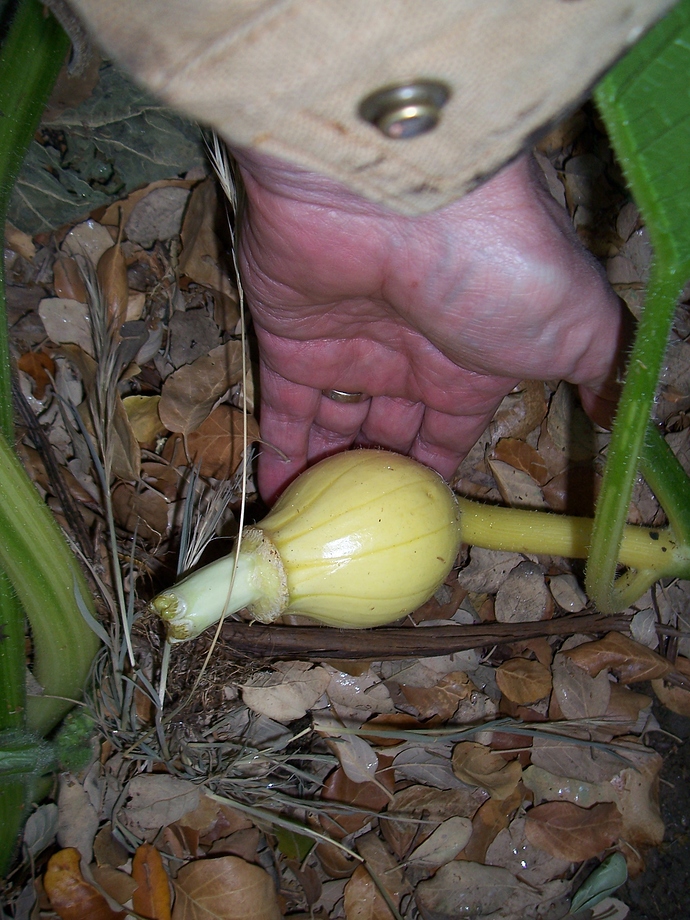 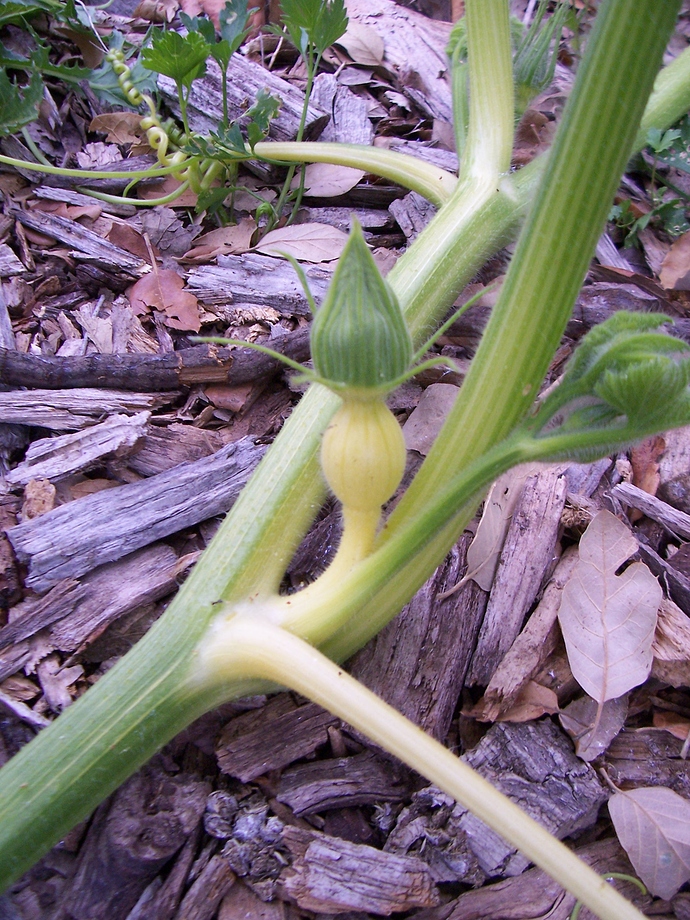 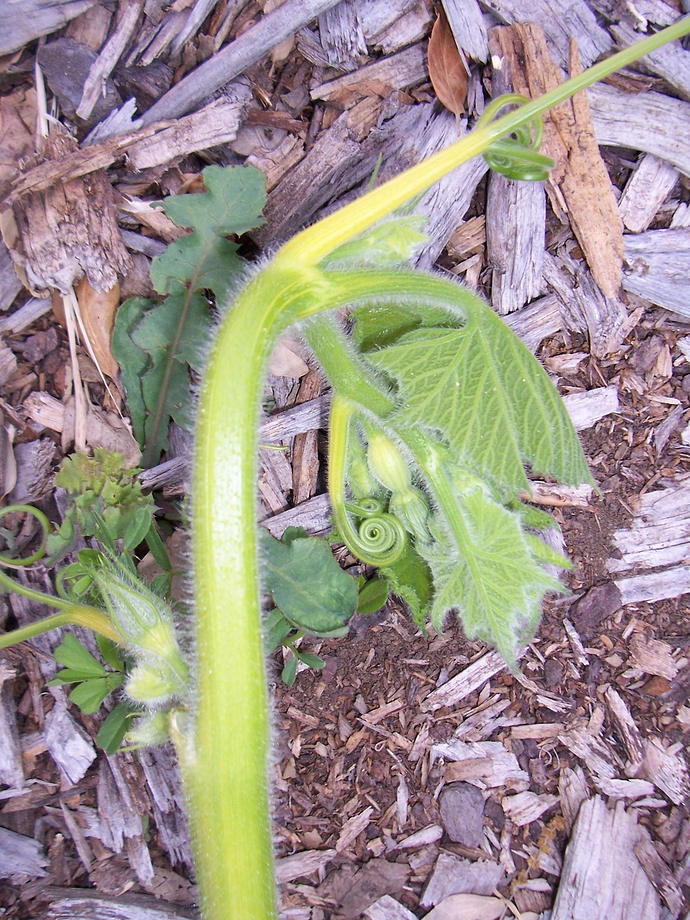 Have you picked out a favorite yet?

This looks like a keeper. What do you think? It is the same one that I was holding in the previous post. 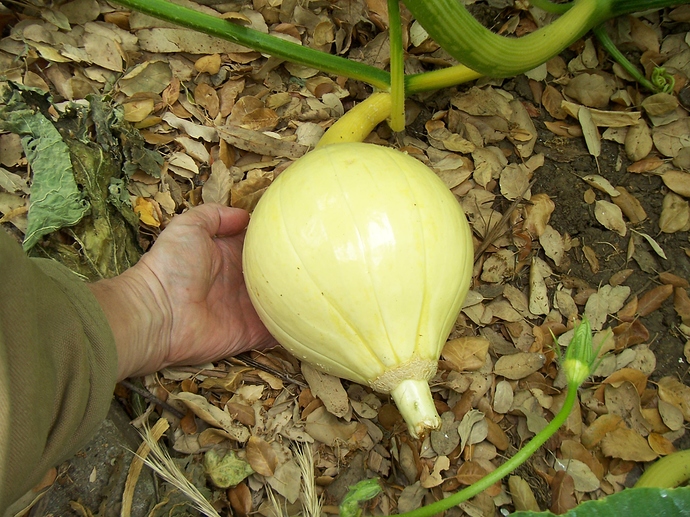 Looks nice. I might wait until it is a little bigger before I committed to removing other pumpkins from the vine. It should really gain some size in the next few days . It looks about the right size for that many days old. 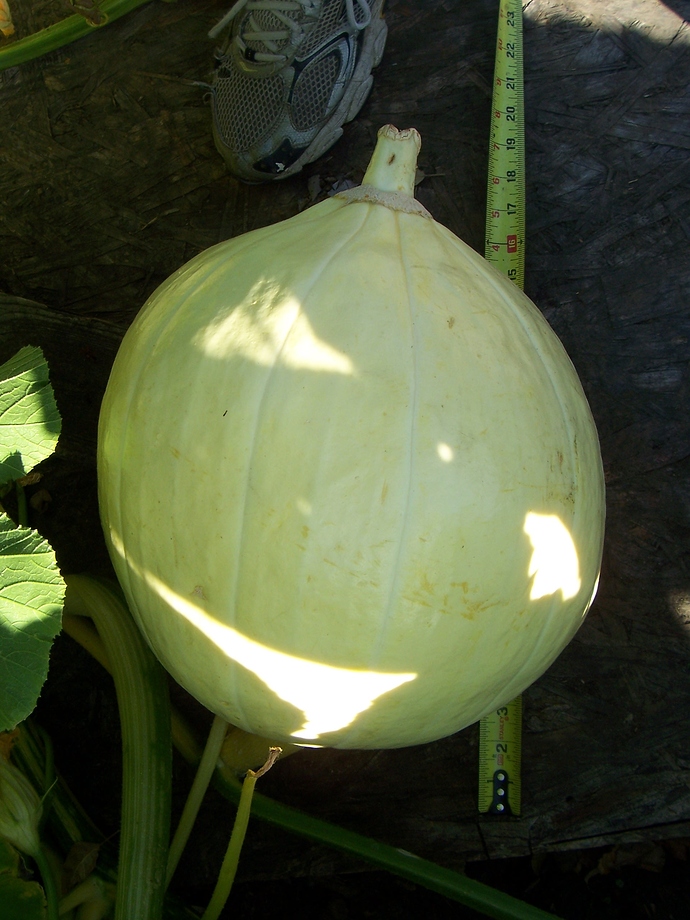 Taste tested a small pumpkin today (1 1/2" diameter x 4" long). The flavor is similar to yellow summer squash but slightly stronger, lingering on the palette for quite a while. Texture is identical to summer squash. I was surprised to see the appearance of chlorophyll inside the fruit. Cooking increased the visual contrast. Could be useful as a substitute in summer squash recipes.

I like them deep fried with a corn meal coating. Seemed silly to throw them out 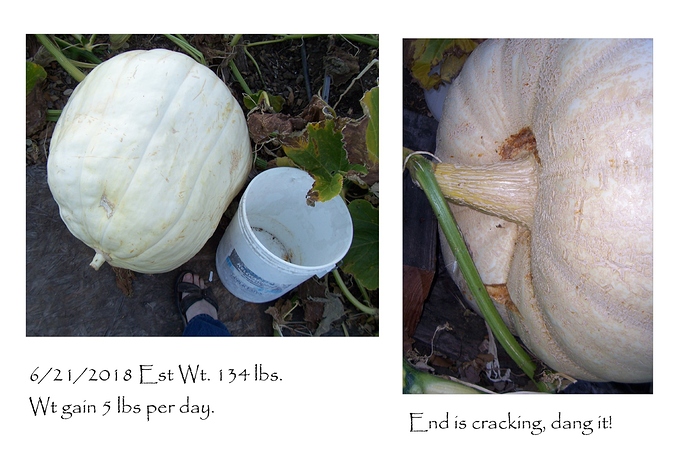